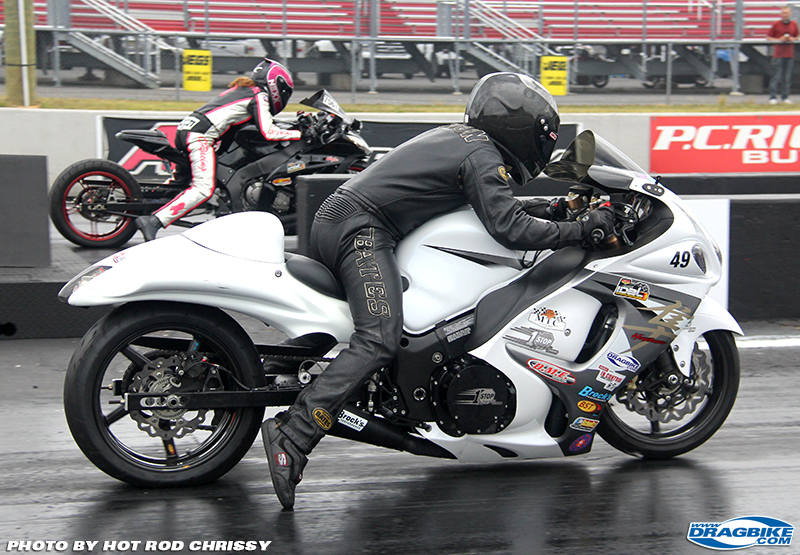 The weekend started out Friday at Atco for testing. At our last event at Rockingham Dragway we came into a clutch problem and had not tested before Atco to see if we had fixed it. As testing started the Richard Gadson and the 1 Stop Speed Hayabusa seemed to be back to its old ways running smooth and running extremely consistent thanks to the Ryan Schnitz Racing tune up. The Friday night gamblers race is always good tune up for the weekend to help get the bike dialed in and after the first round loss we knew we had some work to do for the rest of the weekend.

Saturday did bring some rain but overall a great day. Richard went out for first round of FBR shop 5.60 qualifying and blasted to a 5.602 which was good enough for #1 qualifier. In Crazy 8’s Richard ended up number 14 qualifier after almost going perfect in round 2 of qualifying with a 8.877. After the rain delay we started out Et classes. In Brock’s Street ET Richard left a little early with a .016 red light ending our night. In Shinko Pro ET Richard ended up going out in the 4th round just a few rounds from the finals. 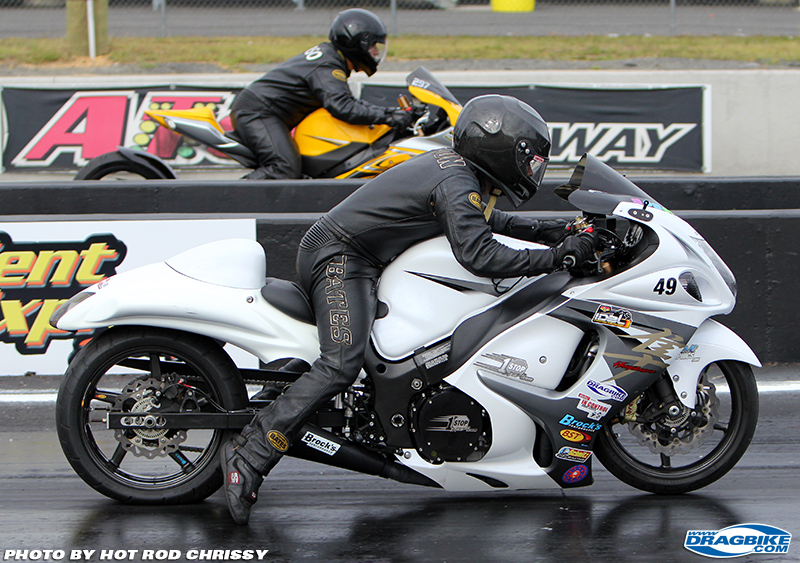 Sunday started off with a 1st round loss to Ben Knight in Shinko Pro ET. Ben came out swinging against Richard with a .008 light and a very rare occasion happened when Ben caught Richard sleeping at the light to end our day in Pro ET. In FBR shop 5.60 Richard lined up next to Dustin Lee in Round 2 and Dustin got the win on a hole shot as Richard and Dustin both ran an identical 5.638. In Crazy 8’s Richard once again had to line up with Dustin Lee and Dustin got him again after another great race as Richard took the hole shot with a .025 light to Dustin’s .047 light but Richard pushed a little too hard going a 8.879 to just break out. Street ET brought us to victory lane over Shane Proctor in the final but once again in round 2 Richard and Dustin Lee met again this time Richard getting the best of Dustin using a .020 light and a 8.715 on a 8.71 dial in.

We did have to overcome some challenges over the weekend as our clutch problem from Rockingham started to come back late on Sunday. We changed a couple fibers on Saturday night hoping it would help Sunday and it did for a little bit but Sunday night in round 4 it really started to effect Richard and being able to launch the bike the way he wanted to. Now in the later rounds we have to hot lap the bike and have very little time to make changes but Richard asked if we could swap out the steels in the clutch to try and get the launch to smooth out. Most people said we didn’t have the time but thanks to our MTC quick access clutch cover we were able to change the steels in the smoking hot clutch right in the staging lanes in about 10 minutes or less and it did help for 1 pass and in the last 2 rounds Richard overcame the not so smooth launch and still ran on his numbers to take the win. 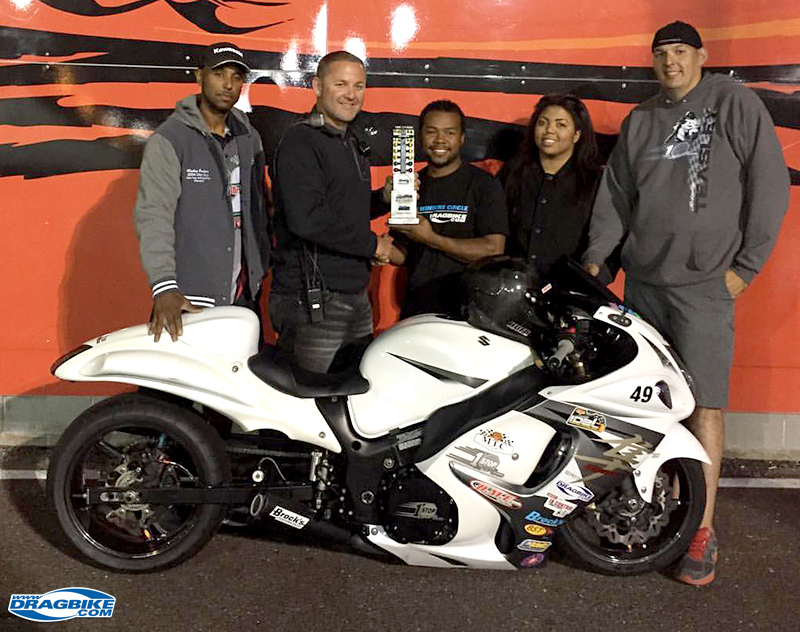 The challenge that Richard and I feel was the hardest all weekend was getting Dustin Lee in round 2 of 3 classes in a row. Most riders hope they never see Dustin Lee until the finals or hopefully never. Dustin has proved to be one of the best bracket racers out there as he always pushes at the tree and runs his numbers pass after pass. Dustin did get the best of Richard 2 out of 3 rounds but not one pass was easy for either rider. Each pass had the pressure and atmosphere of a final round pass. They were neck and neck on every pass even running the same ET in the 5.60 class. Richard did catch Dustin sleeping on the tree with a pair of .051 and .047 lights as Dustin is usually .030 or better. Hopefully next race we can wait and see Dustin in the finals rather than round 2.

Next race will be the IDBL DME Fall Nationals on Oct 2-4th. 1 Stop Speed will be on the manufactures midway, so stop by and see us!

We also want to thank Richard Gadson for choosing to ride our Hayabusa. Richard does a lot of riding in a weekend on our bike, the gamblers race plus 4 classes all weekend while riding and tuning on the HDFR Pro Street Bike. Richard now has rode the 1 Stop Speed Hayabusa in 4 races and has 3 wins and 1 final round appearance. That’s a pretty good record and looks like a great combo is building for 2016 as we have plans to run Richard full time on an all new Hayabusa being built this winter.