Pomona, does that word hold any significance to you? Does it trigger something? If you’re a drag racer then that one word is extremely important. Every year the National Hot Rod Association (NHRA) starts & ends their professional drag racing season in Pomona, CA. Diehard fans of the sport have it on their bucket list of tracks they have to visit. Hardened veteran racers & youthful rookies both dream of racing there one day.

If you’re a sportsman drag racer then the season ending race at famed Pomona is certainly the “Holy Grail” of accomplishments. Whether you’re clinching a Lucas Oil title or fighting it out for a Summit Series title, it’s hands down the hardest achievement to claim in drag racing lore (Editor’s note: Opinion of author, although it would be hard to debate it). For the grassroots racers competing in the Summit Series Championship hunt it was a long hard-fought process to even get to Pomona. From running an NHRA sanctioned bracket series all season for points, to attending the NHRA Division Finals (in your respective division), to punching your ticket to Pomona by winning the Division Finals (& beating the best from multiple states), to actually traveling (for some across the entire country) to the season ending race at Pomona. It was quite the journey to say the least.

I know about the journey as I lived vicariously through my good friend Jerry Turner when he went a few years back. I raced with Turner all season at Bristol Dragway and when he claimed the Division 2 title in ET Motorcycle he had punched his ticket to Pomona…. Which is where I came into play, as he asked me to accompany him on the trip from Tennessee to California for a chance to become the NHRA National Champion. It was certainly a trip that I’ll never forget and I’m glad I was able to join him on his quest. But that’s another story, part of which you could read about Turner’s 2015 edition, click here to read. (yes he’s made it there twice).

The real reason of this article is to highlight the 2017 NHRA ET Motorcycle National Champion, but it was important to spend the first half explaining the supreme significance of this accomplishment. I met Riley Toth this past summer while attending a CMDRA event in Medicine Hat, Alberta… Yes, that’s in Canada. Not only did I meet Riley, but I met the entire Toth family (Father-Dave, Mother-Gail, Brother-Zach) and while they were racing that weekend (Dave was running the event, Riley & Zach were racing, and Gail was the pit crew) and quite busy I was able to observe what an incredibly hard working and close-knit family they were. A few days later we were all able to slow-down and really get to talk over a delicious dinner. 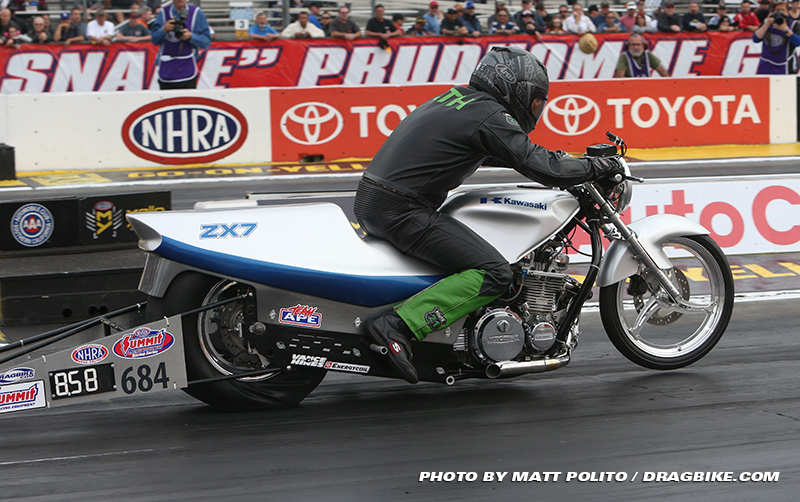 Now I wouldn’t consider myself old, but being a bit older than Zach & Riley I was blown away by how respectful and well-mannered they both are at such a young age. It’s awesome to see young drag racers that will be great ambassadors for the sport. Anyways, back to the story and about how a 22-year-old from Medicine Hat, Alberta, Canada won the 2017 NHRA National Championship. Already a two-time CMDRA champion, Toth’s trip to Pomona started off by winning the Medicine Hat Raceway’s Pro Bike points championships, followed by his brother Zach in second, & father Dave in third (yea, it runs in their blood). This championship qualified him for the Division 6 Finals in Woodburn, Oregon. The Toth family headed southwest for the almost 900 mile one-way trip to try their chance at punching the highly sought after Divisional Title and ticket to Pomona. Obviously, this mission was accomplished and with Division 6 being the first finals for the Summit Series, Toth now had about 10 weeks to prepare for his Pomona trip.

Where the Toth’s compete, they generally do not use a delay box, but knowing that he would be up against competitors using a delay box Riley decided to install one on the bike. But it wasn’t just a delay box he would be getting used to using, the family decided to put Riley on Zach’s bike (which was acquired over the offseason from the Midwest-another story, another time). So yes, you read that right… The 22-year-old Toth would be going to Pomona for a shot at the National title not only riding a bike he had never ridden, but using a delay box that they never use. Despite being the first Division finals to complete, Toth only had one opportunity to ride/test this new combination prior to his trip to Pomona.

As a racer myself, I’d have to tip my hat to Riley for choosing that setup and then proving it worked. It shows you how good of a racer he is for basically riding a foreign setup (to him) at Pomona and sealing the deal. I know that I would have chosen to stick with a setup I was more comfortable with, although that may be why I’m writing this article & not the one being written about. It was only a 1500 mile one-way trip for the family to travel down to Pomona and they were ready as ever when it was time to head south!

I talked with Riley about the experience and he had this to say, “It was a very exciting event and the NHRA did an awesome job with everything. From the banquet that made us all feel like professional athletes, to the “driver introductions on Sunday”, to the celebration and awards/prizes that we garnered. It was certainly a dream come true and something I’m proud to mark off my to-do-list.”

While I followed the time-runs & eliminations from afar I was curious as to how the race unfolded in Riley’s eyes. I asked him if he was affected by having two red lights out of his three-time runs. He somewhat chuckled and said he was still trying to get used to the delay box. When it was time for eliminations he had it figured out and was stellar for all but one round, in which he admits he had some luck as he was racing a slower opponent and hesitated on the tree (while considering cross-talk, which he usually does not race with). But, I always personally say you have to have one lucky round in any event win and that was his. The final round was that of championship caliber with a .011 reaction time and dead-on run.

“I was screaming… a lot,” when I asked him what happened after he won. Who wouldn’t be screaming I said! What’s next for Riley in his young career… Will we see him one day on a Pro Stock Motorcycle? He certainly said he really enjoyed chatting with all the PSM racers throughout the weekend and that just might be on his to-do-list. Congratulations to Riley Toth on his amazing 2017 season, capped off by wearing the crown of NHRA National ET Motorcycle Champion! 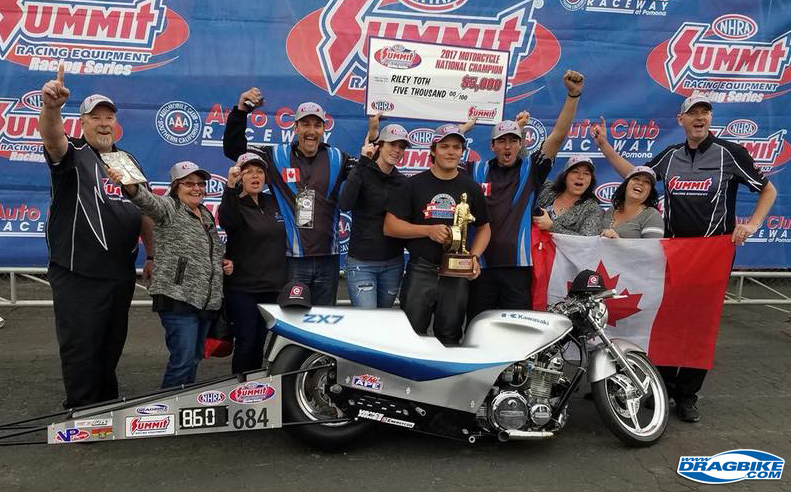