Arana Jr. is treating the final two races of 2016, starting with the NHRA Toyota Nationals this weekend at The Strip at Las Vegas Motor Speedway, as a test session.

“We’re using the rest of this season for testing some different ideas and some things we normally wouldn’t have done in the Countdown or at a race,” Arana Jr. said. “But at this point, I’m going to test some new ideas and try some off-hand things that we normally would never try and see if we can learn some stuff for next year.” 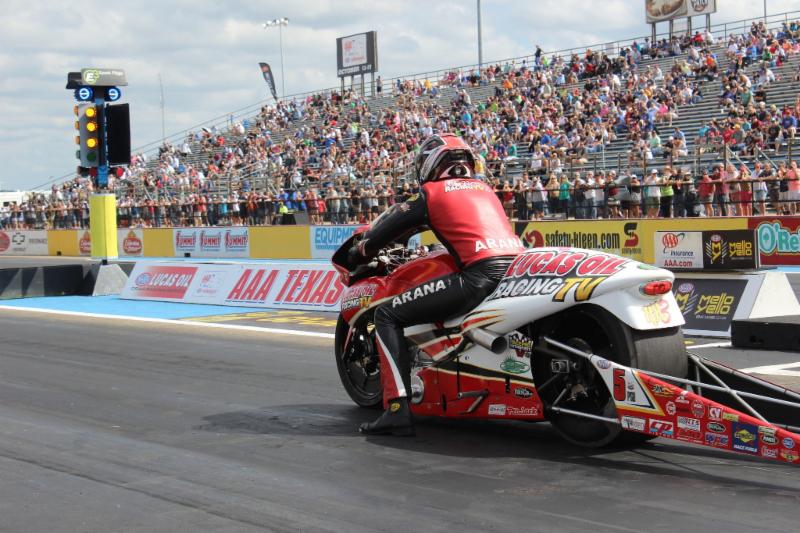 Arana Jr. has finished fifth or better in the final points standings in each of his five seasons as a professional racer. That streak will likely come to an end this year, as he’s 10th in the Countdown to the Championship after a tough first four races to the Countdown.

“Unfortunately, it’s been one of those years,” Arana Jr. said. “We’ve been struggling, but I guess everybody goes through that. This is our year. Hopefully, we’ll get all this out of our system, and we’ll be good for next year.”

Arana Jr. has won 11 races and 18 No. 1 qualifiers in his young career, so he knows the way to the winner’s circle. A win is not out of the question in one of these final races, and Arana Jr. looks forward to competing.

“I’m not looking forward to the season being over because I love racing, so when it’s over, I’m like, ‘Now, we’ve got to wait,'” Arana Jr. said. “I’m looking forward to a new start. I’m excited for what’s to come for next year because we’re working on a lot of stuff, and we should be in good shape.”