The Summit Racing Equipment Internationals at Tierp Arena, the fourth and final round of the 2018 EDRS Pro Nordic Motorcycle Championship, was in many ways record breaking. Thomas Pettersson won the EDRS Pro Nordic MC Top Fuel Motorcycle title in style by winning the event. Vesa Lipponen and Jaska Salakari made headlines in the world of Super Twin Motorcycle drag racing with 5-second passes in qualifying, but the race was won by Roman Sixta, while Marcus Christiansen claimed the title. 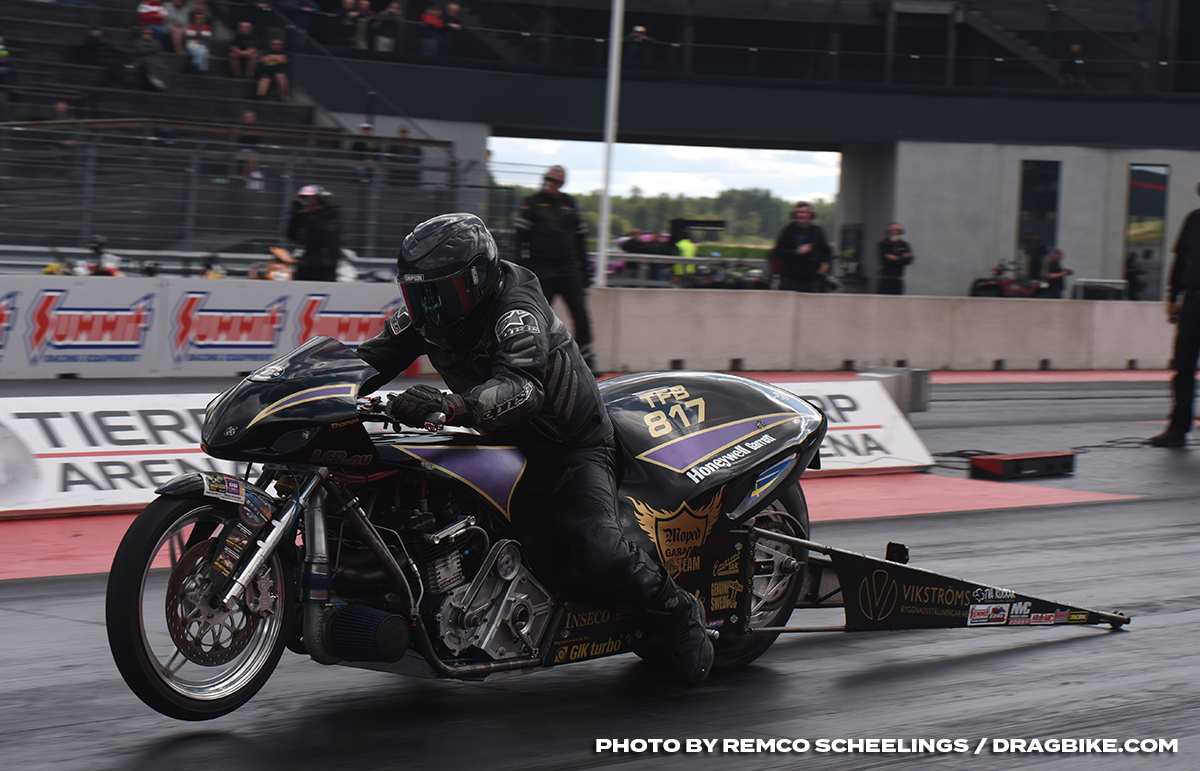 In Pro Stock Motorcycle Kalle Lyrén was the winner at Tierp with a new EDRS Pro Nordic MC elapsed time record and the quickest run outside the USA, but the title went to Thomas Lysebraate Olsen, who reset his personal best as well. In Super Street Bike Vesa Ruhanen broke the 7-second barrier and won the race, but with Mathias Bohlin, winner of the first two races of the season, this spectacular category had the champion that deserved the title the most. Peter Östlund claimed the title in Super Comp Bike in style with a win at Tierp, while Jami Oksanen is the 2018 champion In Super Gas Bike.

After two great days of qualifying, eliminations day had a late start due to rain early in the morning, while the programme had to be stopped twice after some rain. But the Tierp Arena track crew did a fantastic job and thanks to their hard work all eliminations could be completed and the 2018 EDRS Pro Nordic MC champions crowned. 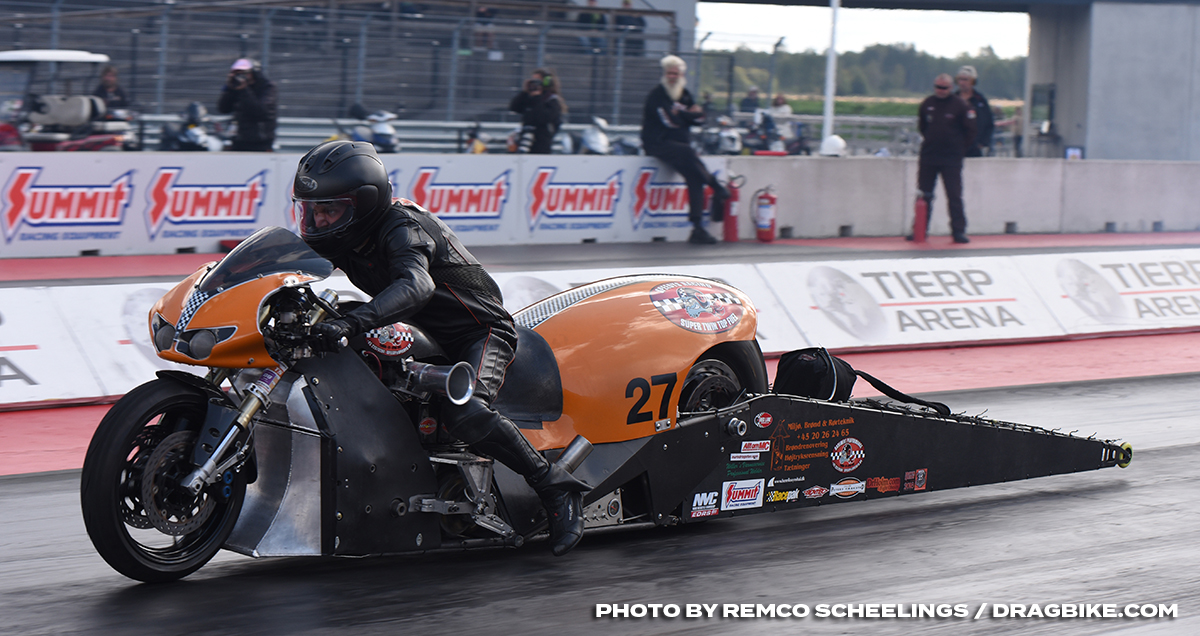 But in eliminations consistency is also important and that’s how Roman Sixta, the number eight qualifier, defeated Salakari in the first round to advance to the final when Greger Johansson couldn’t make it in time for the semifinal. Samu Kemppainen, who reset his personal best in qualifying, won the first round, to defeat Lipponen in the semifinals.

Consistency was also the keyword in the final and with a great 6.78 seconds Sixta took the win. Marcus Christiansen, championship leader and winner of the Alastaro and Gardermoen races, won the first round but couldn’t start in the semifinals. But at that moment the 2018 title was already for the Dane. Kemppainen finished the championship in second position, with Lasse Leponiemi third. 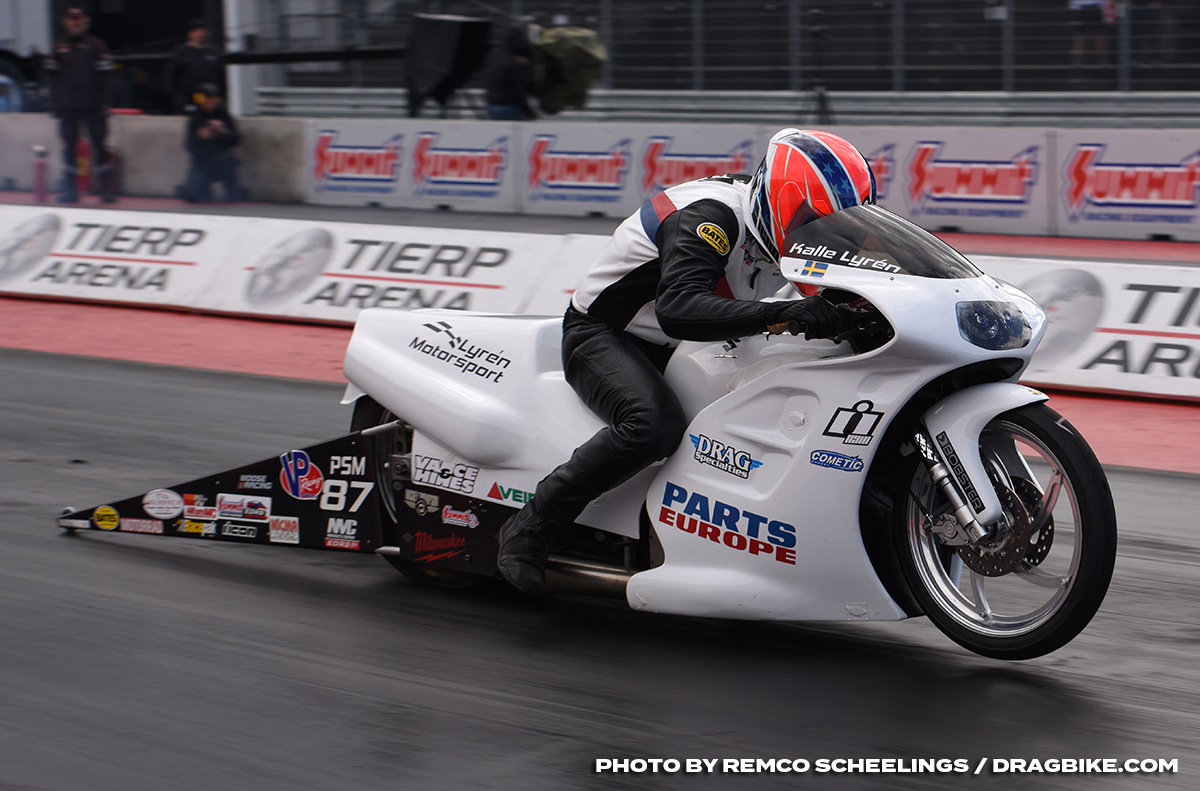 After a first round win over Thomas Andersson, Lyrén had to face Thomas Lysebraate Olsen in the final, after the championship leader defeated Janne Koskinen in the semifinal. In a great final Lyren stormed to another great 6.975 seconds to defeat Olsen, who stunned with a new personal best of 7.05 seconds, the Norwegian rider’s first 7.0-second run. After his 2017 EDRS Pro Nordic MC Pro Stock Motorcycle title, Olsen is also the 2018 champion, with Lyrén in second position and Timo Savolainen third.

Pettersson defeated Peter Andersson in the first round to face Jan Sturla Hegre in the final. In a great 6.67 seconds Pettersson won the final when Hegre ran into problems. Rikard Gustafsson, recovering from an accident one week ago at Hockenheim, finished the 2018 championship in second position, with Sverre Dahl third.

In Super Street Bike championship leader Mathias Bohlin only had to qualify to clinch the 2018 EDRS Pro Nordic MC title. The winner of the first two races of the season had no problems to do so, and with a third qualifying position Bohlin claimed his first title. 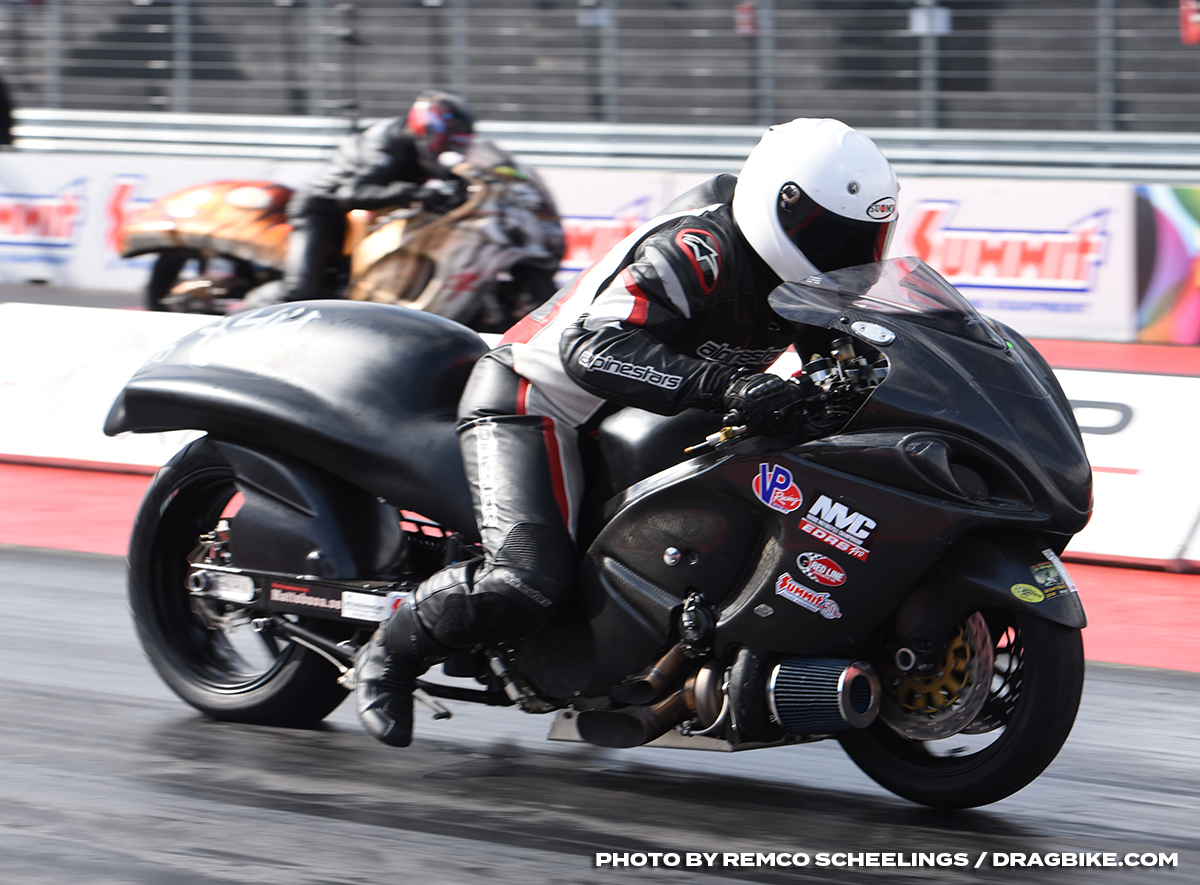 After breaking the 7-second barrier twice in qualifying, with a 6.965 seconds as his new personal best, Vesa Ruhanen also proved his great form in eliminations. After defeating Ida Zetterström in the quarter-final, Ruhanen was also too quick for Alex Hope in the semifinal. 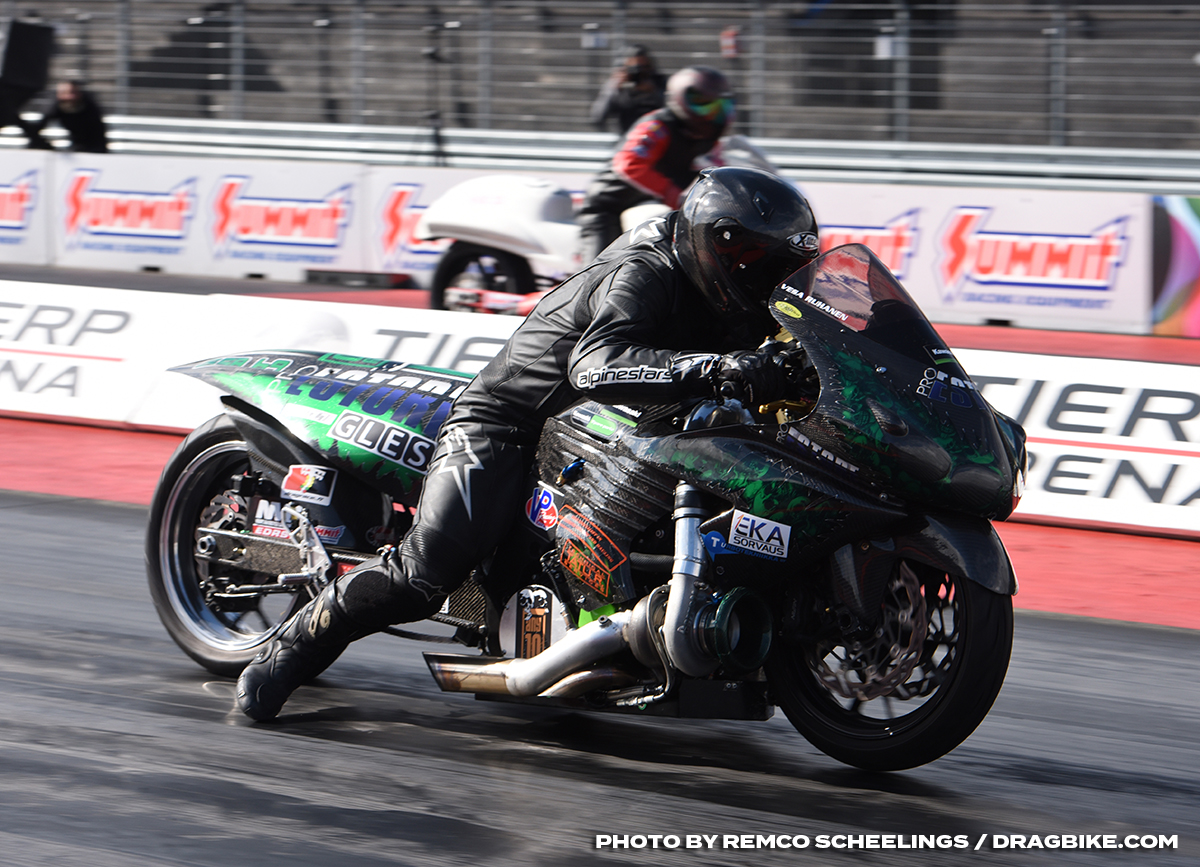 In the other semifinal 2017 SSB champion Mogens Lund defeated the 2018 champion Bohlin in a great 7.02 seconds to advance to the final. But in the final Lund ran into problems and that made it even easier for Ruhanen to claim the victory. Behind Bohlin, Ruhanen finished the 2018 championship in second position, with Lund third. 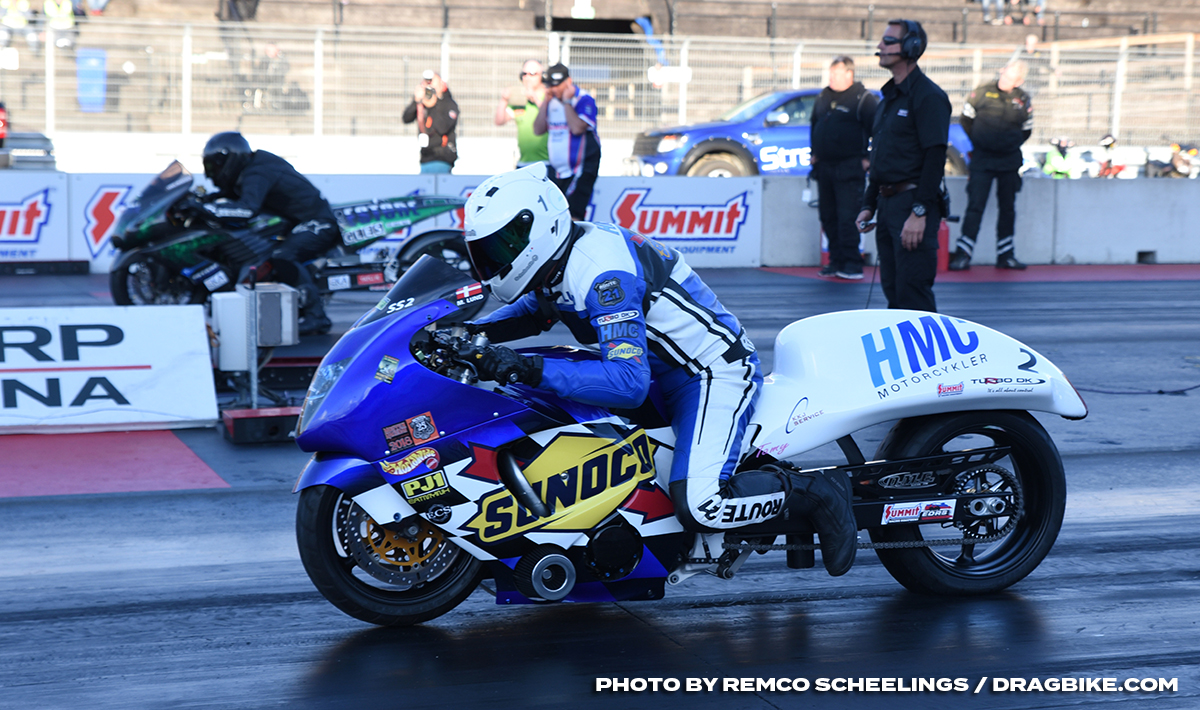 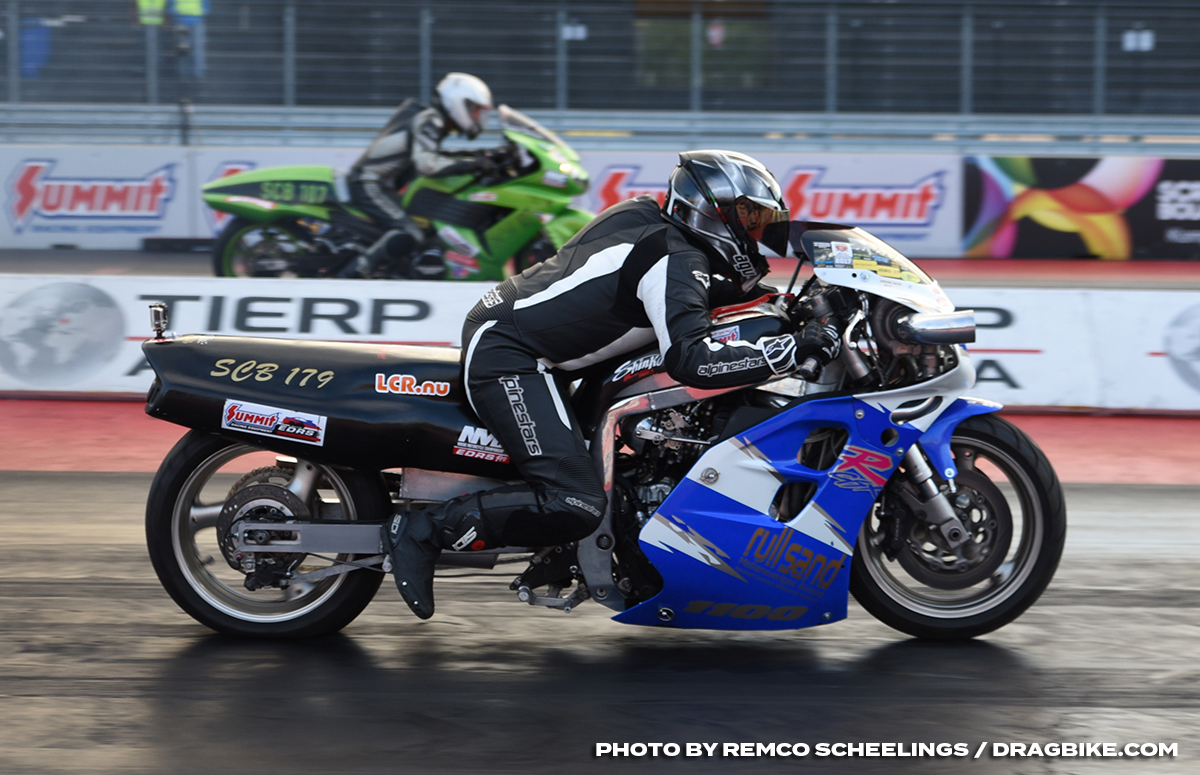 In the final Östlund took the win over Tomas Jonsson. In the championship Kimmo Rantala jumped from fifth into the second position, with Jonsson third.

In Super Gas Bike it was a great fight between the top three in the championship, Jami Oksanen, Jenni Pekkarinen and Ellen Ødegaard. Pekkarinen was defeated in the first round and as Oksanen and Ødegaard both advanced to the final, Oksanen claimed the title whatever the outcome of the final would be. With an almost perfect 9.503 seconds Ødegaard defeated the 2018 champion to claim the win and finish the championship in second position, with Pekkarinen third. 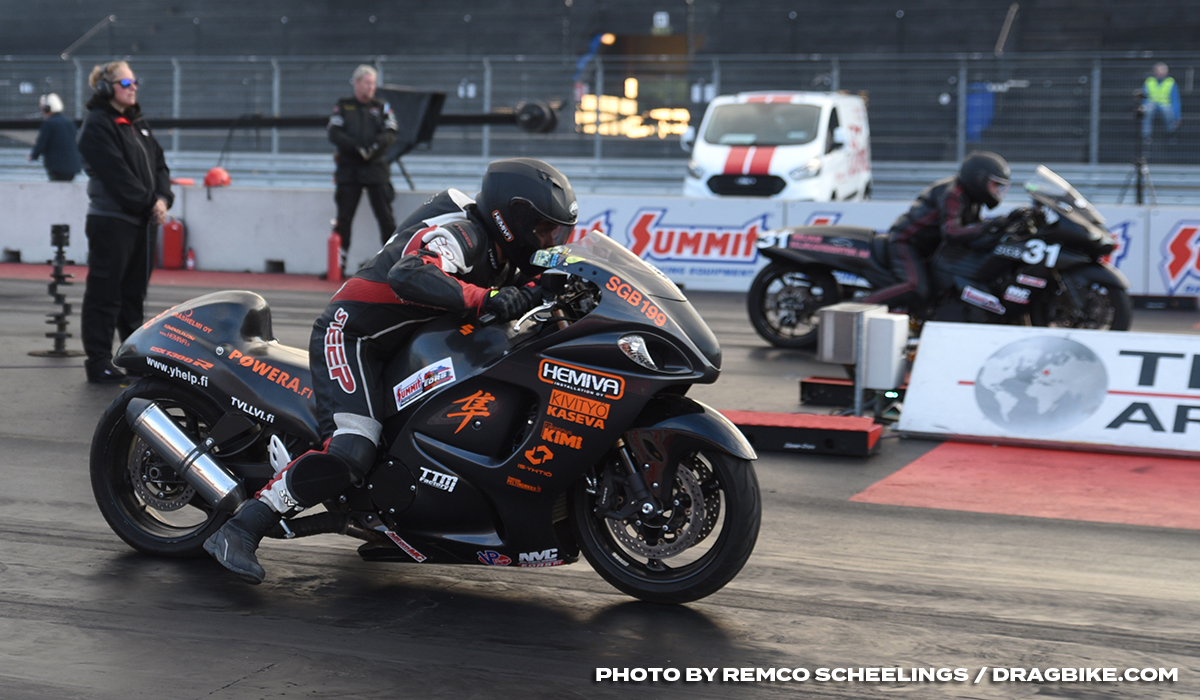 All results and final championship standings are on: www.edrspro.com