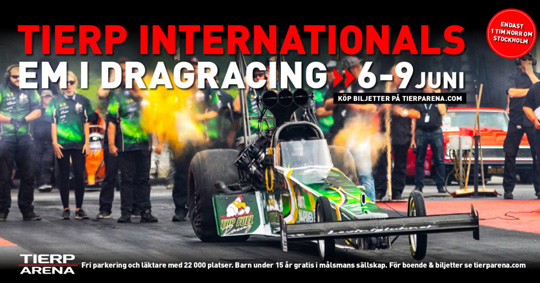 Only a few days to go and the EDRS Pro Nordic Motorcycle Championship kicks off with its traditional opener, the Tierp Internationals at Tierp Arena. Once again the most prestigious motorcycle drag racing championship of Northern Europe counts six different categories and will be decided in four races. An interesting fact is that the first Tierp race and Kauhava in Finland are also part of the FIM Europe European Drag Bike Championship. Marcus Christiansen, Thomas Lysebraate Olsen, Thomas Pettersson, Mathias Bohlin, Peter Östlund and Jami Oksanen are the reigning champions, but not all six riders will be able to defend their title. A great season with close season-long title fights is ready to start at Tierp. 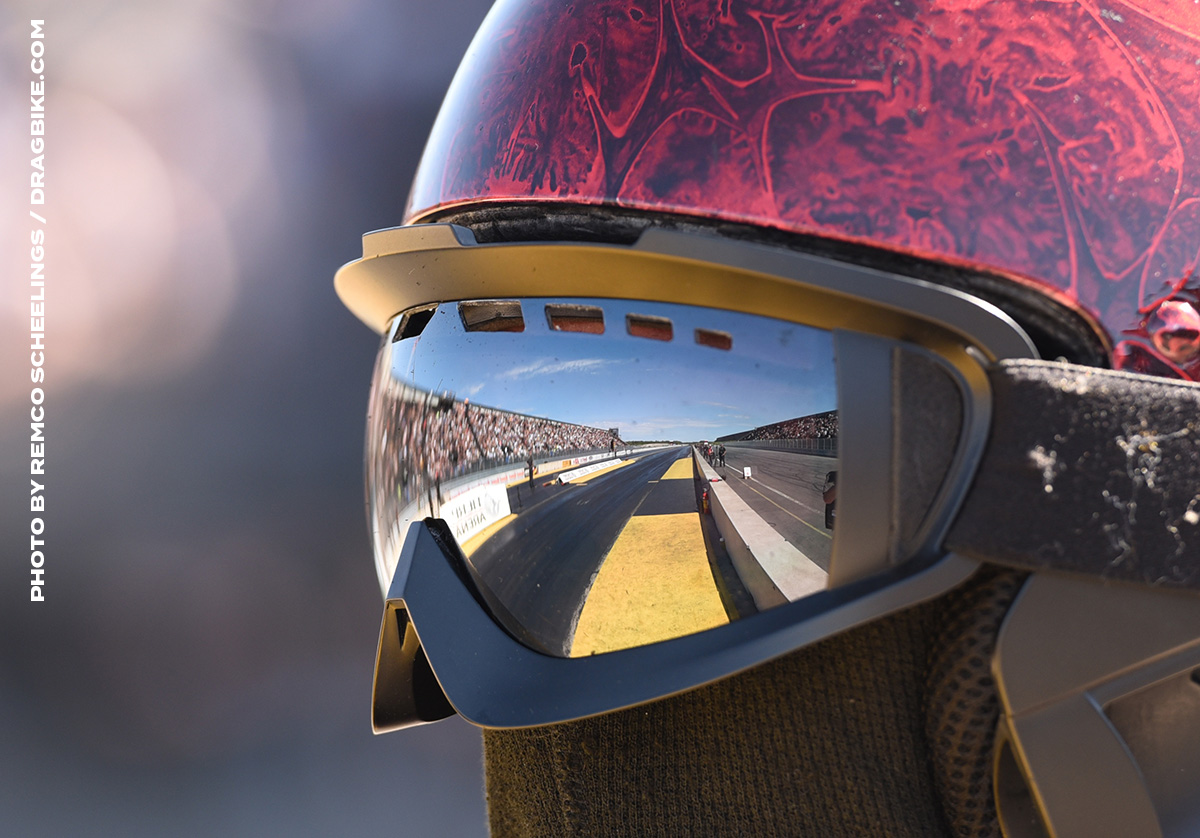 After the traditional kick off at Tierp Arena, the teams travel to Finland for the second race of the season at the brand new track in Kauhava, a facility everybody is looking forward to. Gardermoen Raceway in Norway is host to round number three and for their finals, the riders will go back to Tierp Arena for the Summit Racing Equipment Internationals, once again the fourth and last race of the EDRS Pro Nordic Motorcycle Championship. There are no changes in the categories as the 2019 EDRS Pro Nordic MC will include once again Top Fuel Motorcycle, Super Twin Motorcycle, Pro Stock Motorcycle, Super Street Bike, Super Comp Bike, and Super Gas Bike. 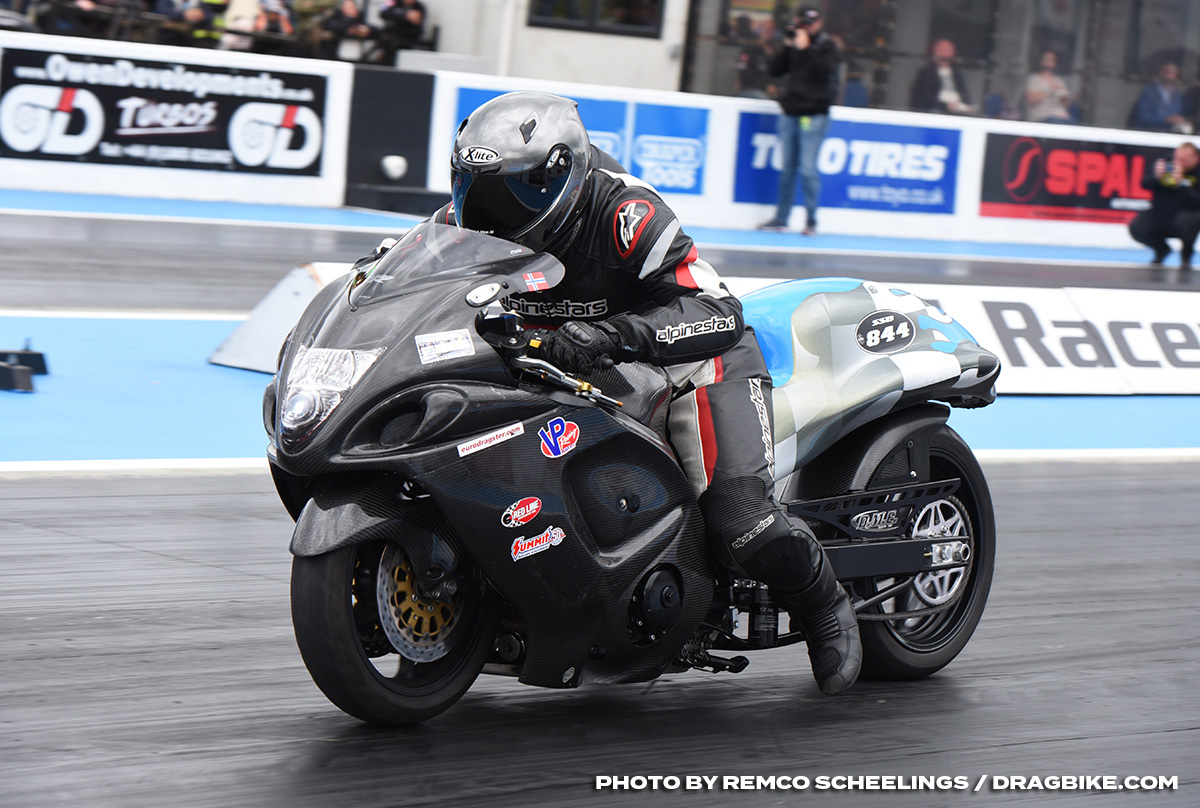 But not everything is the same. The Tierp Internationals and the FHRA Nitro Nationals are also part of the FIM Europe European Drag Bike Championship. And with that addition it’s great to see some familiar names back in action on Scandinavian soil, making some of the EDRS Pro Nordic MC fields even stronger than ever before. The Swedish round will not count for the FIM Europe European Super Street Bike Championship, but in Kauhava points can be earned for all four classes (Top Fuel, Super Twin, Pro Stock, and Super Street Bike). Riders with a national license will only get points for the EDRS Pro Nordic MC, while riders with a FIM international license will get points for both championships. Another major change is that the riders who attend all four races of the EDRS Pro Nordic MC, will be awarded 30 instead of 100 bonus points. With this rule change, it is still possible for riders to fight for the championship even if they have to skip one round.

Super Twin Motorcycle is always exciting. With no fewer than 15 of these spectacular machines on the entry list, many of them capable of winning the race and the championship, the Tierp Internationals and the title race will be interesting again. With five riders from Finland and four from Norway, these two countries are leading again in Super Twin Motorcycle. The Netherlands is next in line with two riders, while Sweden, Denmark, the Czech Republic, and the USA are each represented by one rider.

Marcus Christiansen is the reigning champion as the Danish rider took the title in great style with two wins and a runner-up finish. 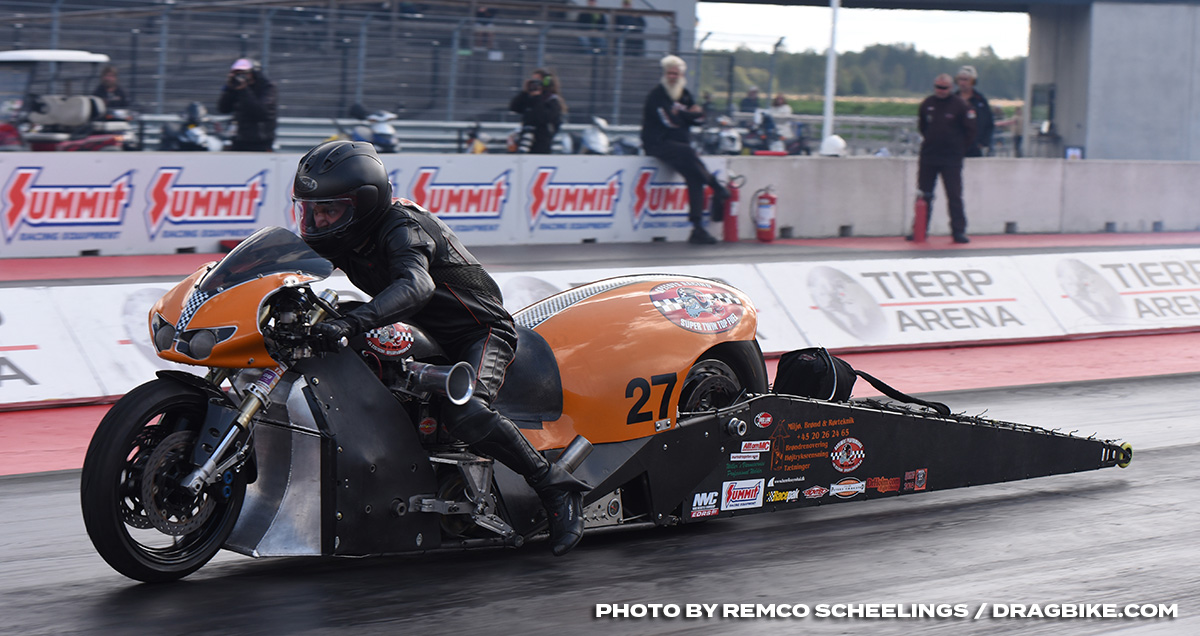 Samu Kemppainen was last year’s number two and as the Finn proved his great form again at the end of last season, the former champion will be a real threat for Christiansen’s second title in a row. Svein Olaf Rolfstad, Greger Johansson, Torsti Kettula, Kristin Hegre, Teemu Kettula, Roman Sixta and Harri Piensalmi were last year’s numbers five to eleven and they are all back for more. Especially Sixta, the 2017 runner-up from the Czech Republic, will try to improve on his 2018 performance.

After he had to skip the 2018 season, it’s great to see 2017 champion Tommy Grimes Jr. back in action with Per Bengtsson’s ‘The Beast’. 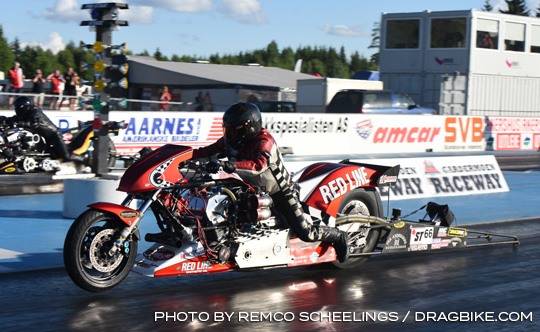 The American rider will definitely be a force to be reckoned with. Back in action too is Hans Olav Olstad after the Norwegian rider had to skip the second half of the 2018 season. Also from Norway comes Trond Jostein Høiberget, while Aku Lantto is the fifth Finn on the entry list. 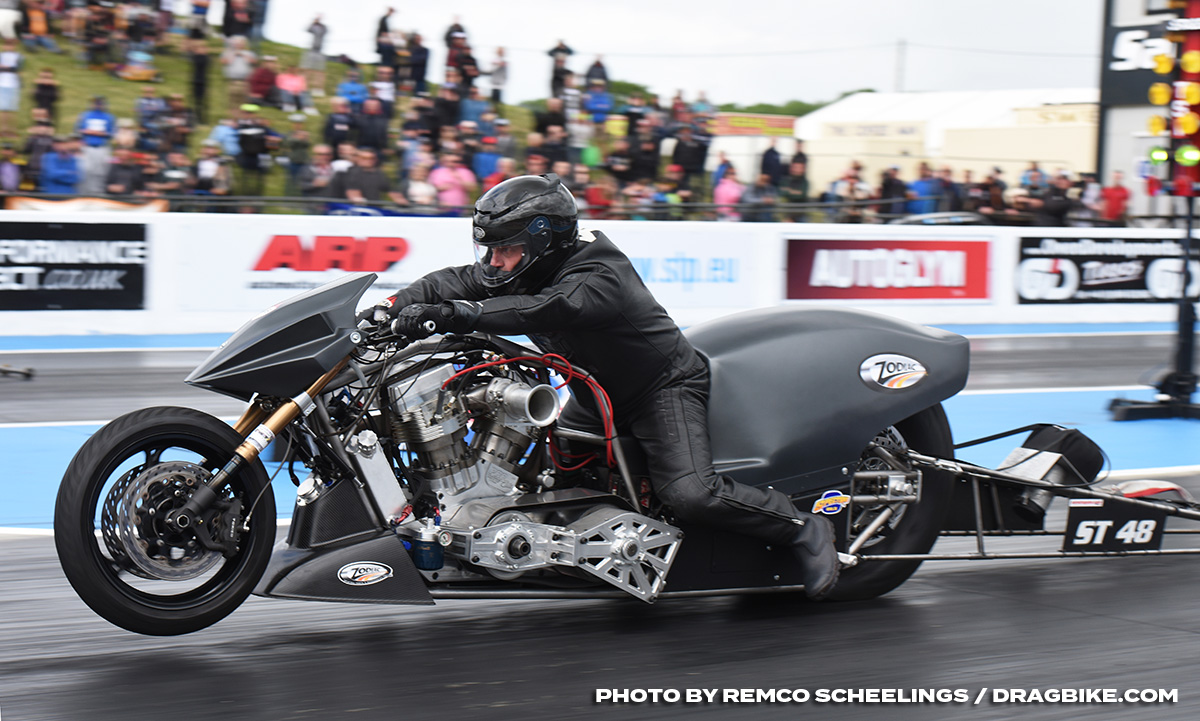 Martijn de Haas and Gert-Jan Laseur are the riders from The Netherlands at Tierp. De Haas is the multiple FIM Europe Super Twin champion and will be in Sweden with a new build bike. Laseur stepped up to Super Twin after winning the 2016 FIM Europe Pro Stock Motorcycle Championship. 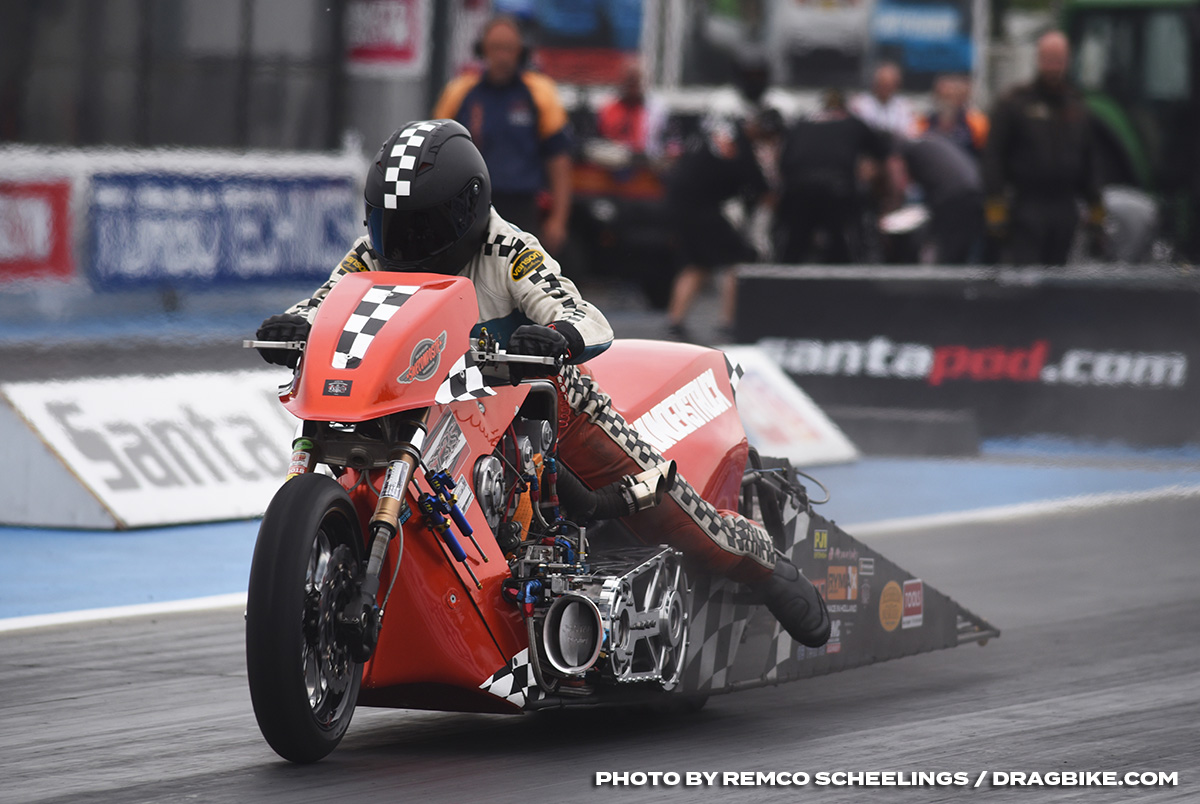 Lasse Leponiemi, last year’s number four in the championship, is not on the Tierp entry list so far, while number five, Anders Hörnström, announced at the end of last year that he would skip the 2019 season. We will see the Swede back in action in 2020. 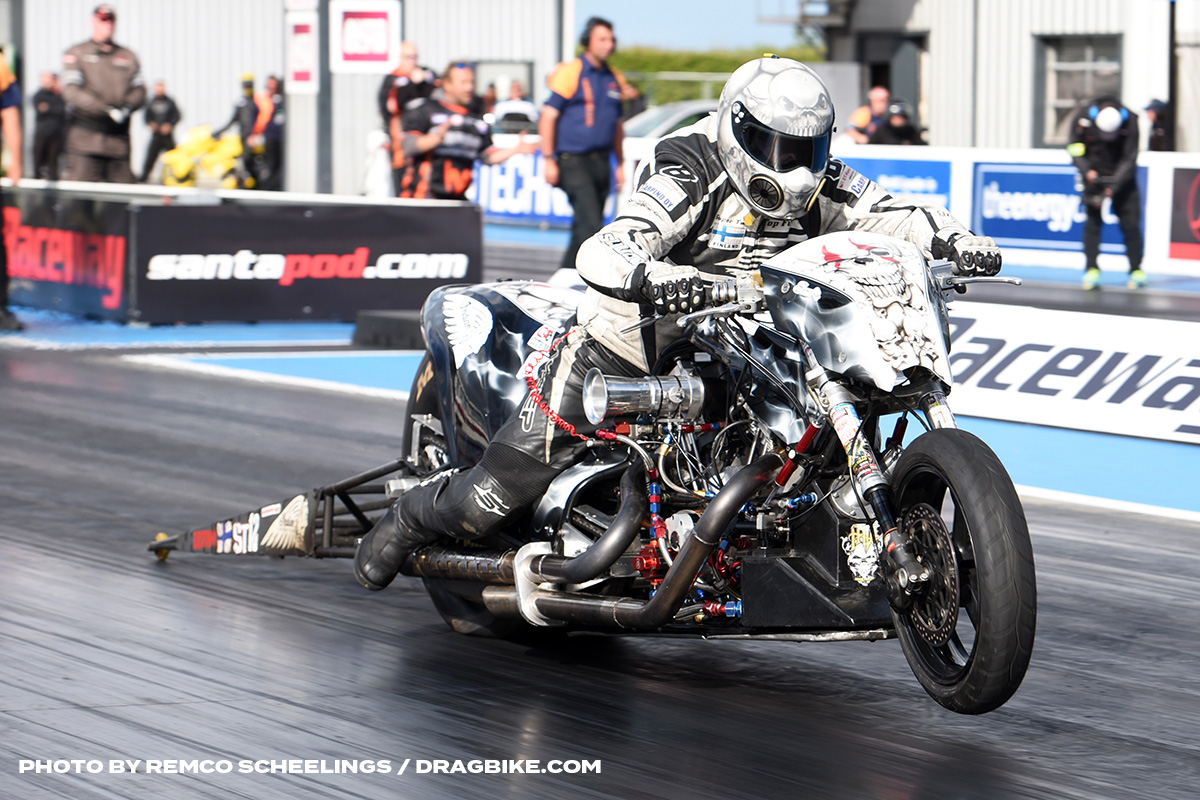 Pro Stock Motorcycle will definitely have a new champion at the end of this season. After winning the title in 2017 and 2018, Thomas Lysebraate Olsen decided to take a break from racing ‘to reload and upgrade’, to get back stronger than ever before. When 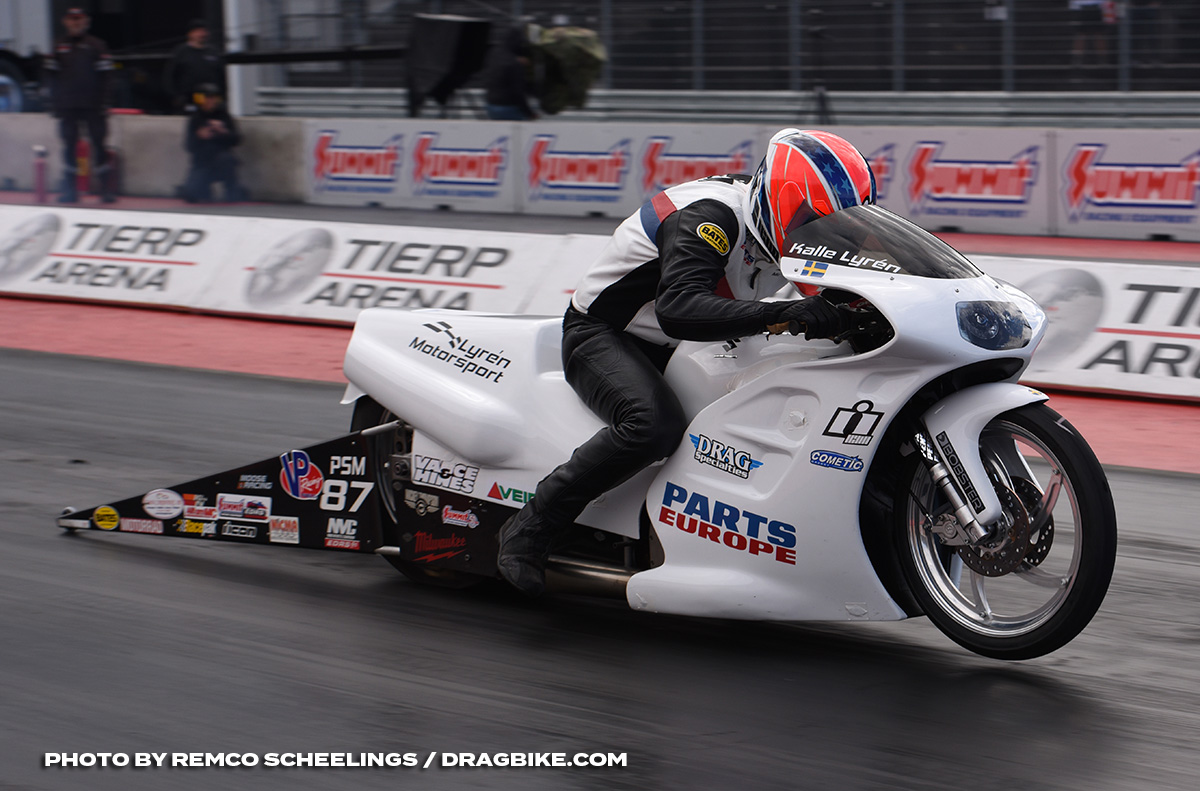 Kalle Lyrén is doing the full tour, the Swede is always a clear favorite to win the title. The former EDRS Pro Nordic MC champion came back on the tour at the halfway point of the 2018 season and immediately dominated the last two races. But the Swede will meet some tough competition at Tierp as there are six riders on the entry list, although it’s unlikely they will all do the full EDRS Pro Nordic MC.

The toughest competition will come from Finland with multiple FIM Europe European Pro Stock Motorcycle champion Fredrik Fredlund. After a one year break the rider from Åland, Finland, is back and will definitely be quick and fast. Janne Koskinen is also a force to be reckoned with as this young Finnish rider made his comeback at the end of last season and won the opening round of the FIM Championship at Santa Pod one week ago. The second rider from Sweden with title chances is Kenneth Holmberg. After some seasons with all kinds of mechanical problems, the Swecomposite rider is back and will hopefully have a trouble-free season with new personal bests. All the way from France comes Bertrand Maurice. This French rider is the reigning FIM Europe European Pro Stock Motorcycle champion and it will be the first time that Maurice will visit Tierp. Bo Thorselius is also back for another season, and although it will be difficult for the Swedish rider to chase a race win, you never know what can happen during a race weekend. Last year’s number three in the EDRS Pro Nordic MC, Timo Savolainen is not on the Tierp Internationals entry list, but we will probably see the Finn back at his home race in Kauhava. 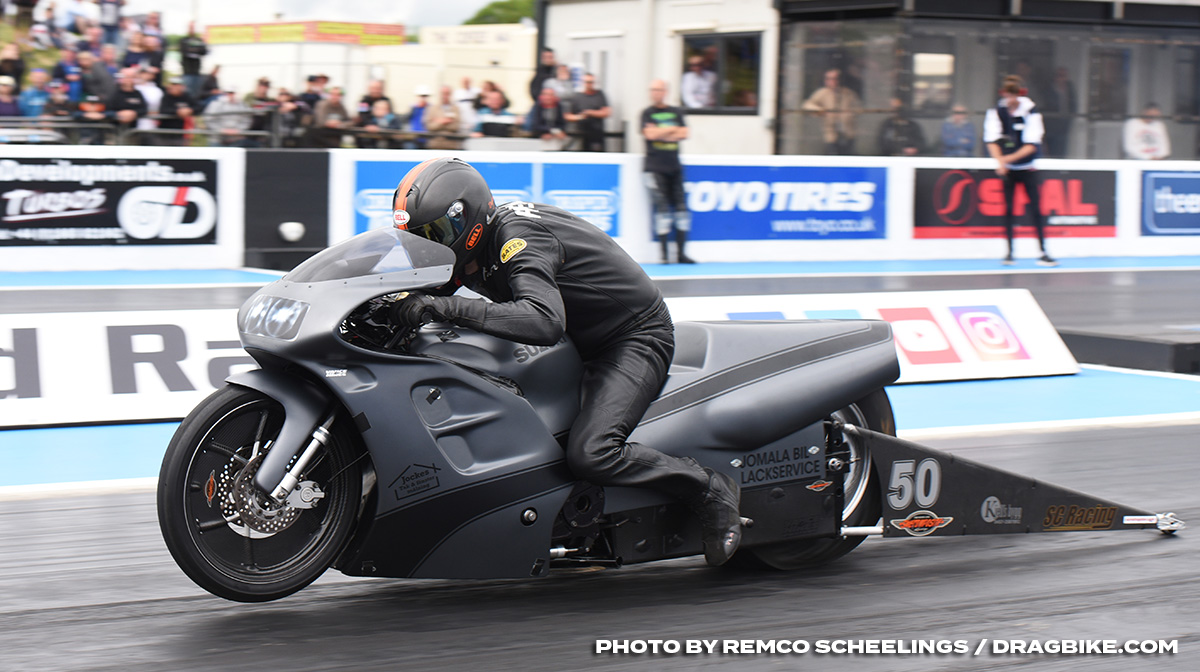 There are no fewer than eight entrants in the Top Fuel Motorcycle category at Tierp Arena. Thomas Pettersson is the reigning EDRS Pro Nordic MC champion, but the Swedish Funny Bike rider will meet competition from the quickest and fastest Top Fuel Bikes in Europe, Rikard Gustafsson from Sweden and Filippos Papafilippou from Greece.

Papafilippou is the reigning FIM Europe European Top Fuel Motorcycle champion and for the Greek rider, it is the first time he will race at Tierp. It’s great to see Gustafsson back after his crash at Hockenheim last year. With these two riders chasing each other, don’t be surprised to see the Tierp Arena track records fall that weekend in June. Jan Sturla Hegre from Norway is a former EDRS Pro Nordic MC champion and proved to be quick as well over the last seasons. As not all Tierp competitors will do all four EDRS Pro Nordic MC races, Hegre might be the biggest threat for Pettersson. 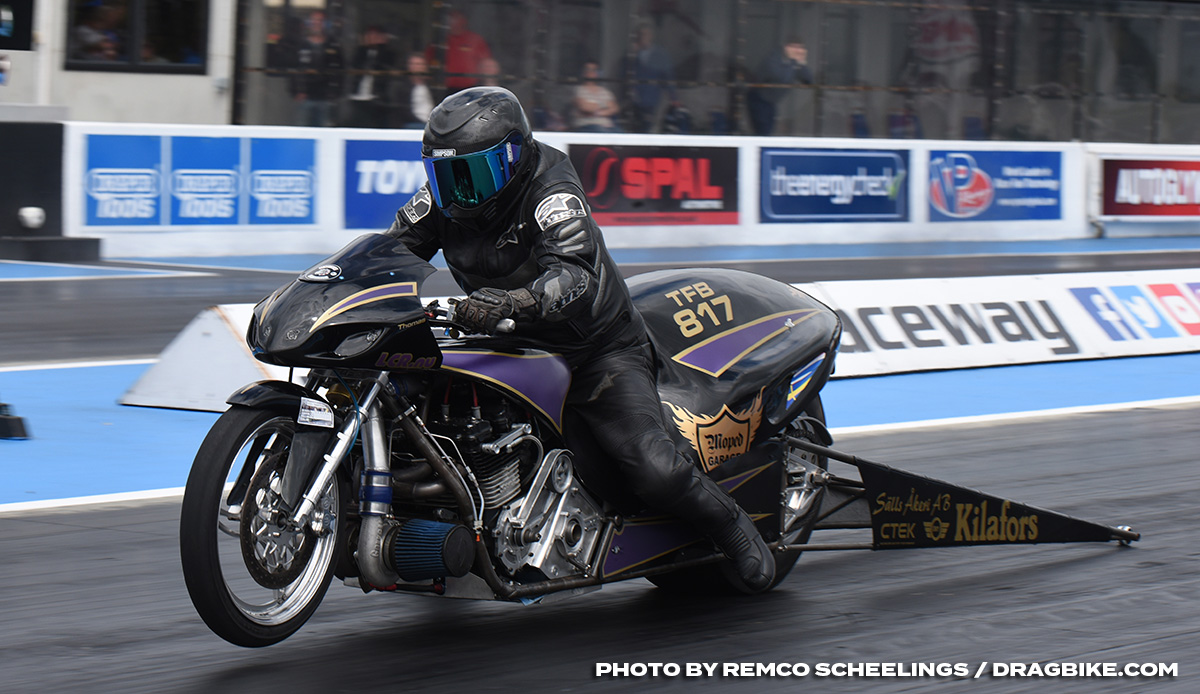 Hans Eriksson from Sweden is a new name in the championship and the same is true for Willem Been. After a long break, the Dutch Super Twin rider is back, but will now field a KTM Top Fuel Motorcycle. It will be interesting to see what Been can do with this quick machine. Peter Andersson and Peter Andersson Ström are also back for more and will do everything they can to make it an exciting title fight. 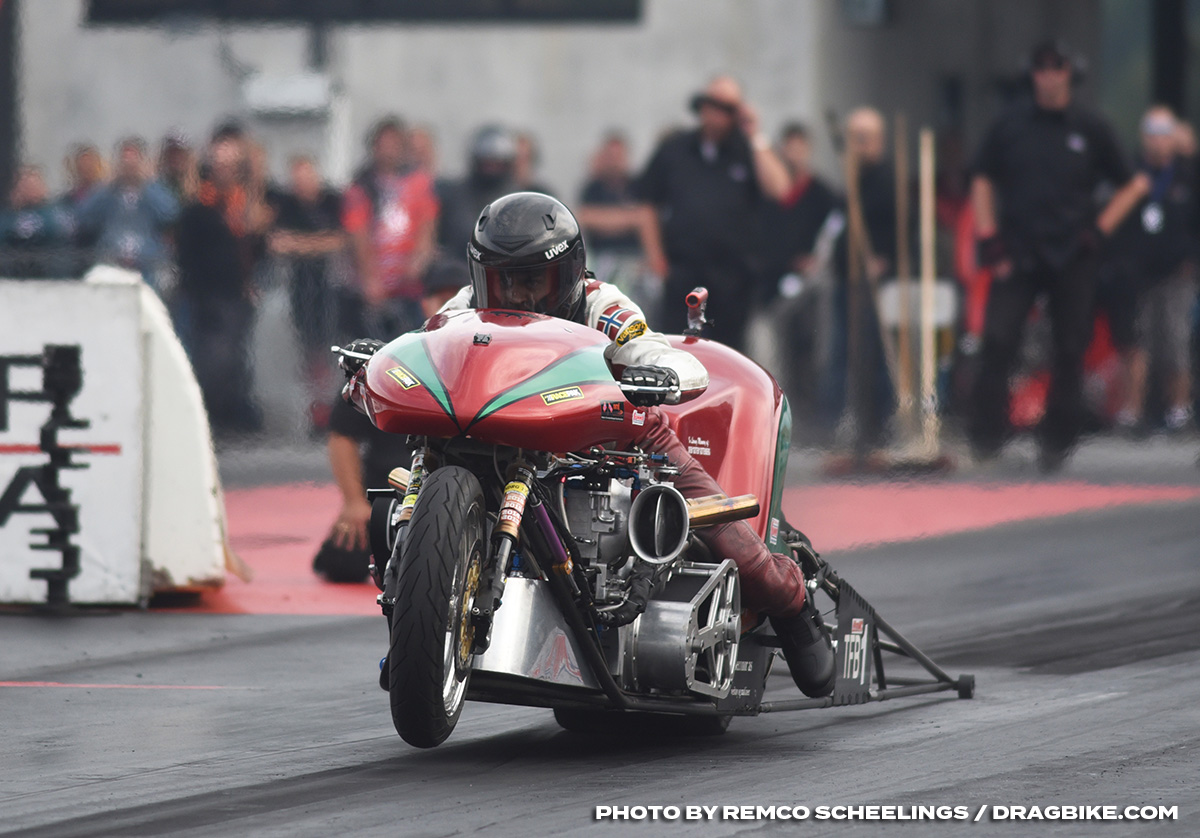 In Super Street Bike Mathias Bohlin stepped up to the next level last season and claimed the title. Bohlin won the first two races of the 2018 season and is eager to repeat that great start this year. The biggest threat will come from Finland. 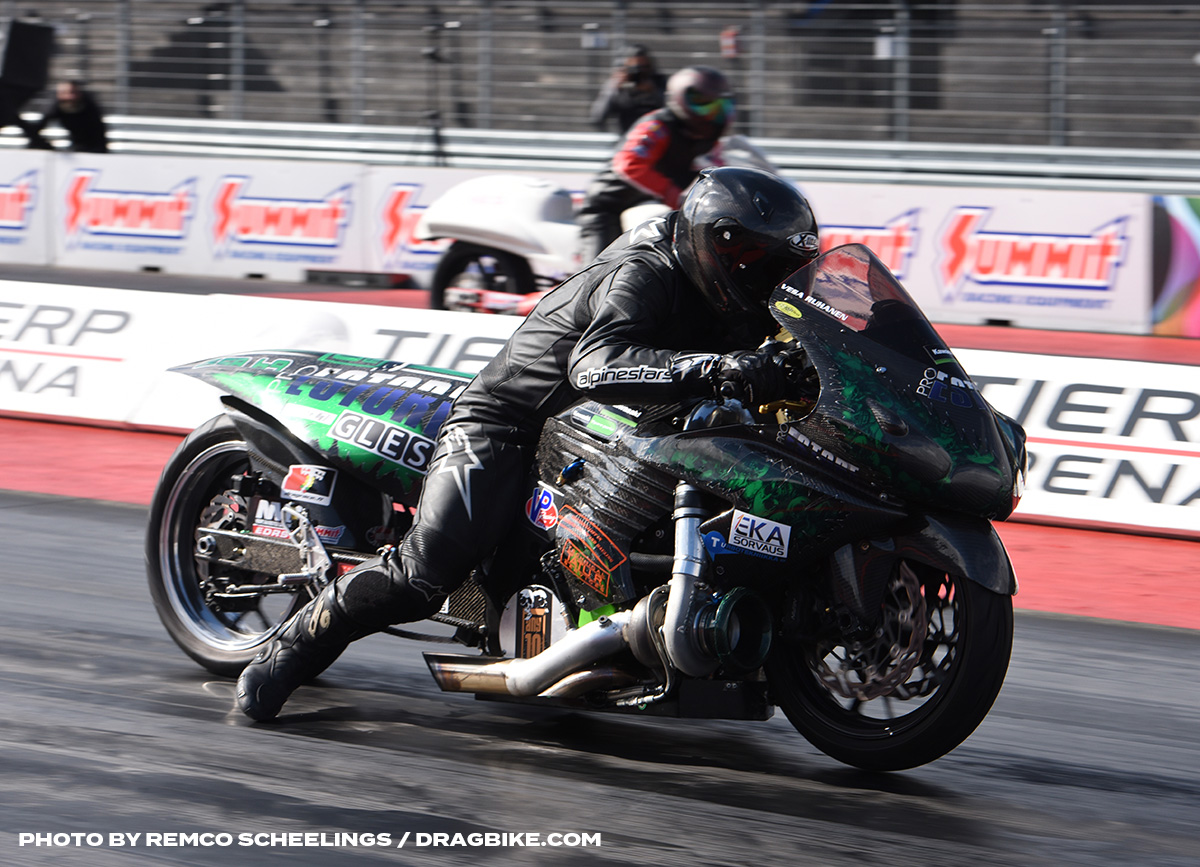 Vesa Ruhanen stunned the SSB world with 6-second runs on his beautiful Kawasaki. Last year’s runner-up will do everything he can to swap position with Bohlin and win his first EDRS Pro Nordic MC SSB title. As well as former champion Björn Friström, Anders Blanck and Roberth Häggblom are also back for more and can always go for wins and the title. Ida Zetterström, from Åland/Finland, might be even more than an outsider this season. 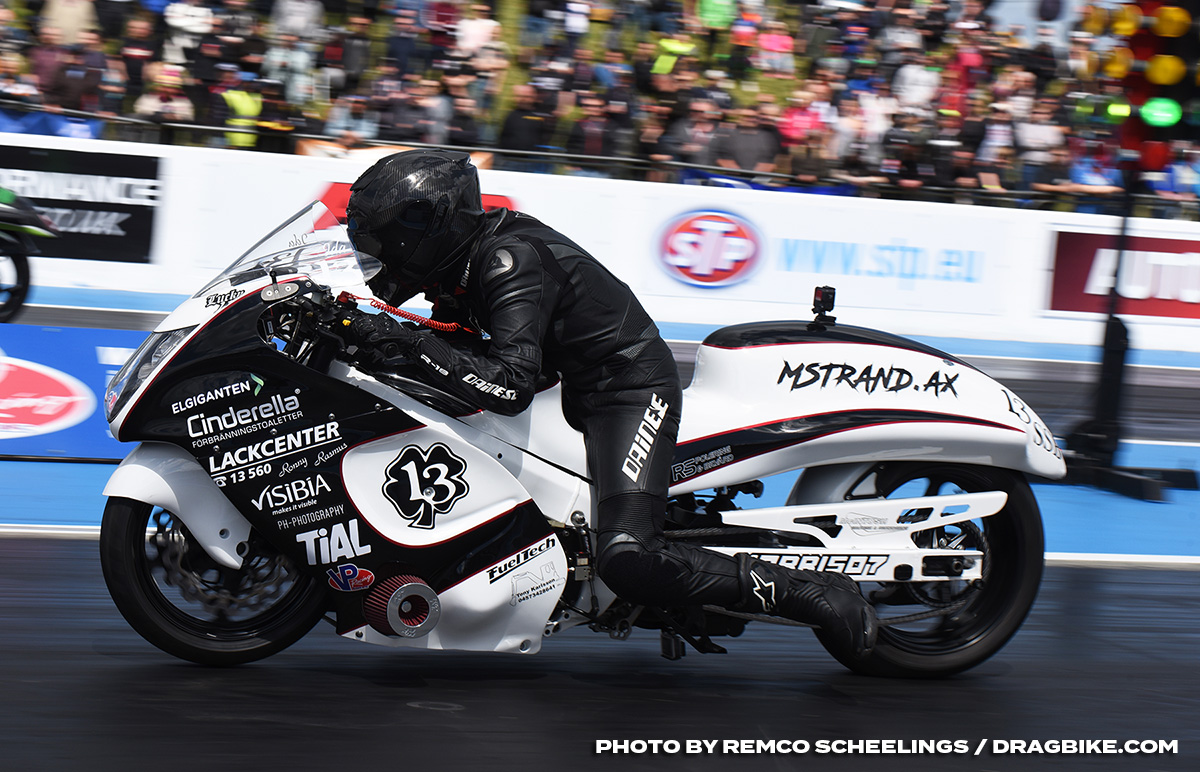 The only female rider on the entry list bought a new bike from the States and although she might have to get familiar with her new proven fast ride, she will definitely be a force to be reckoned with. Kimmo Pulakka, Nichlas Sverin, and the always spectacular Dag Wagenius can surprise as well and will try to improve on their last year’s position in the championship. 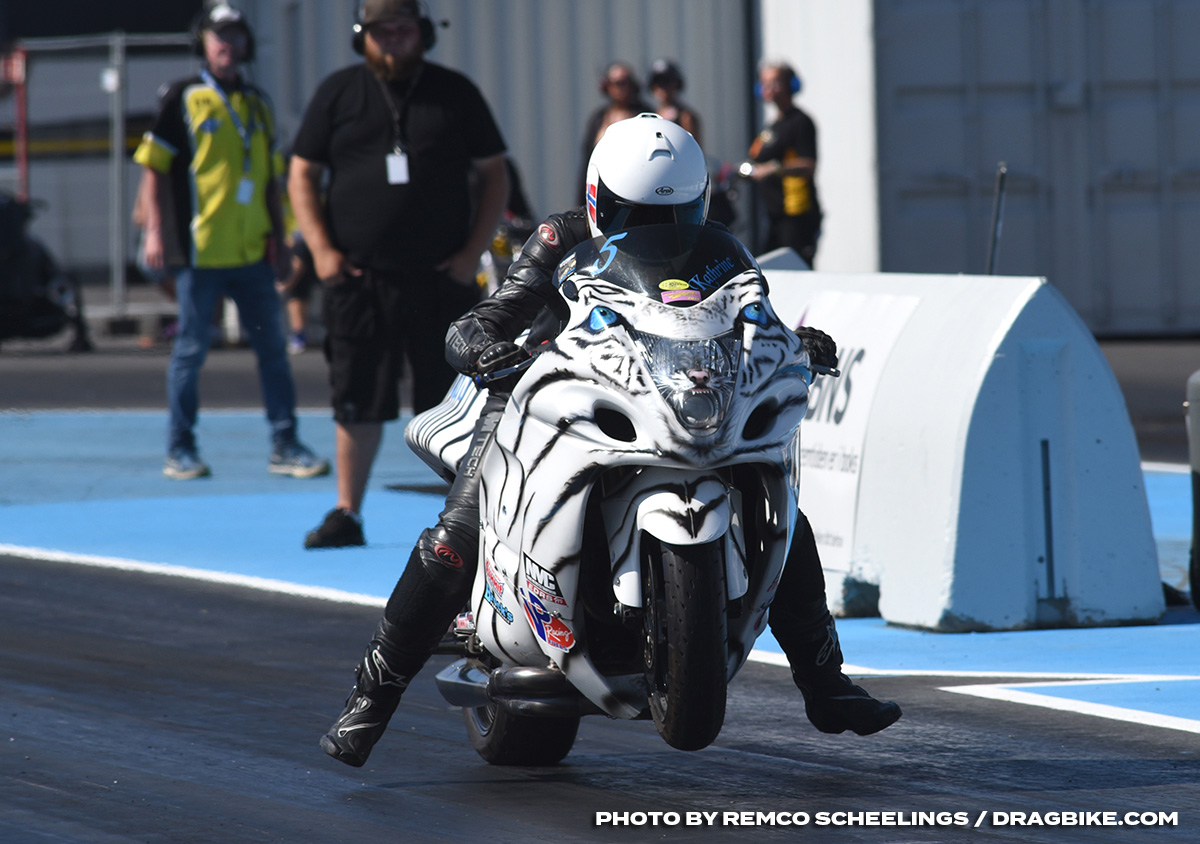 With nine bikes on the entry list, Super Street Bike doesn’t have the numbers we have seen in recent years. Mogens Lund, last year’s number three, will focus on the FIM Europe European Championship and the same is true for last year’s number four Alex Hope. But there are more familiar names missing on the entry list and let’s hope we see them all back later this season. 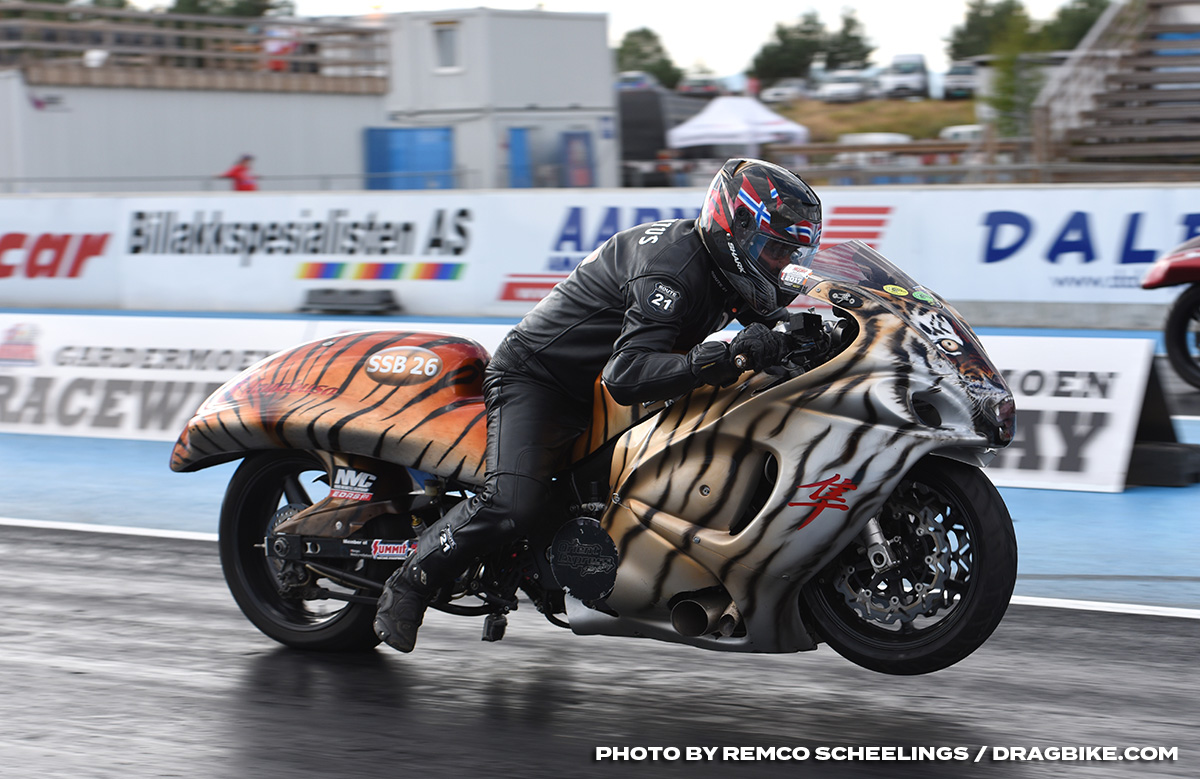 It’s great to see that Super Comp Bike has no fewer than 14 entrants at Tierp Arena. Peter Östlund will try to win back to back titles, but will once again be challenged by last year’s number three Tomas Jonsson, 2017 champion Emil Östlund, Rasmus Östlund, Peter Svensson, Tony Andersson and Andreas Ramkvist. 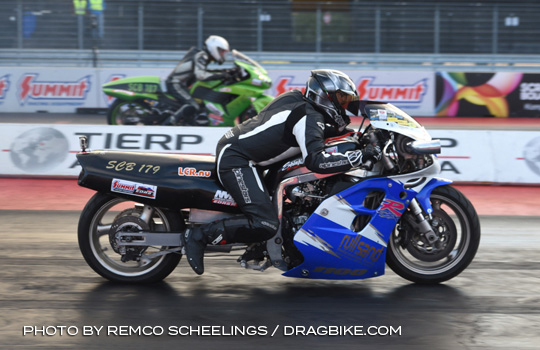 More than just outsiders are Pro Stock Motorcycle rider Kalle Lyrén, who will try to win two titles in two different categories in one year, Kathrine Wagenius, the young Norwegian rider who had to skip three races last season due to school obligations, and Kim Hilander who is back after his Gardermoen SSB crash in August 2018. But it is also great to see some names we didn’t see in last season’s EDRS Pro Nordic MC 8.5-second index class, like Jens Karlsson, Heikki-Juhani Koskinen, Björn Linde, and Per Olsen. 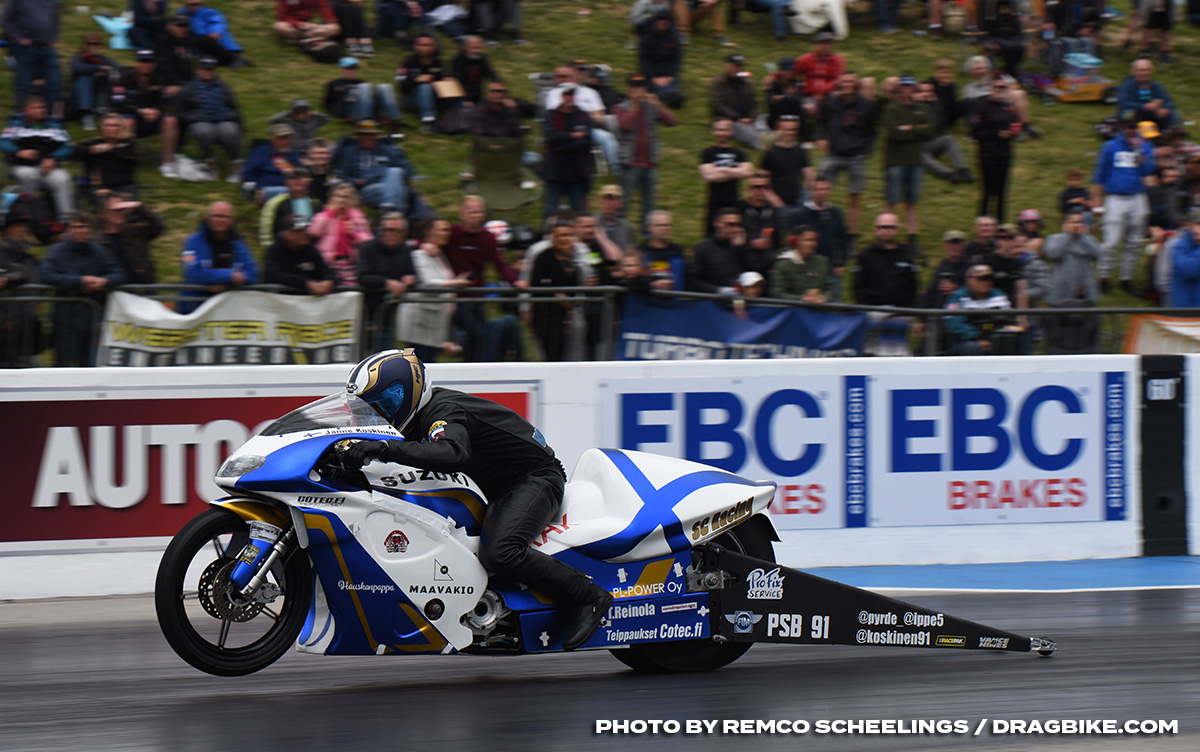 Super Gas Bike starts the season with six entrants. Jami Oksanen is the reigning champion, but the Finn will not be able to defend his title as he has to go into military service. Jenni Pekkarinen was last year’s big surprise and she finished the championship in the third position. The young Finnish rider is a favorite to win the title. But there are more title candidates. Joel Fredlund, son of multiple Pro Stock Motorcycle champion Fredrik, had his first SGB race at the end of last season and will do everything he can to make his dad proud and win another title for the Fredlund family. Magnus Pollack is also a rider we have seen before, while Trygve Kjærstad Helgerud, Bo Sørensen and Risto Torniainen are new to the Super Gas Bike category this season. 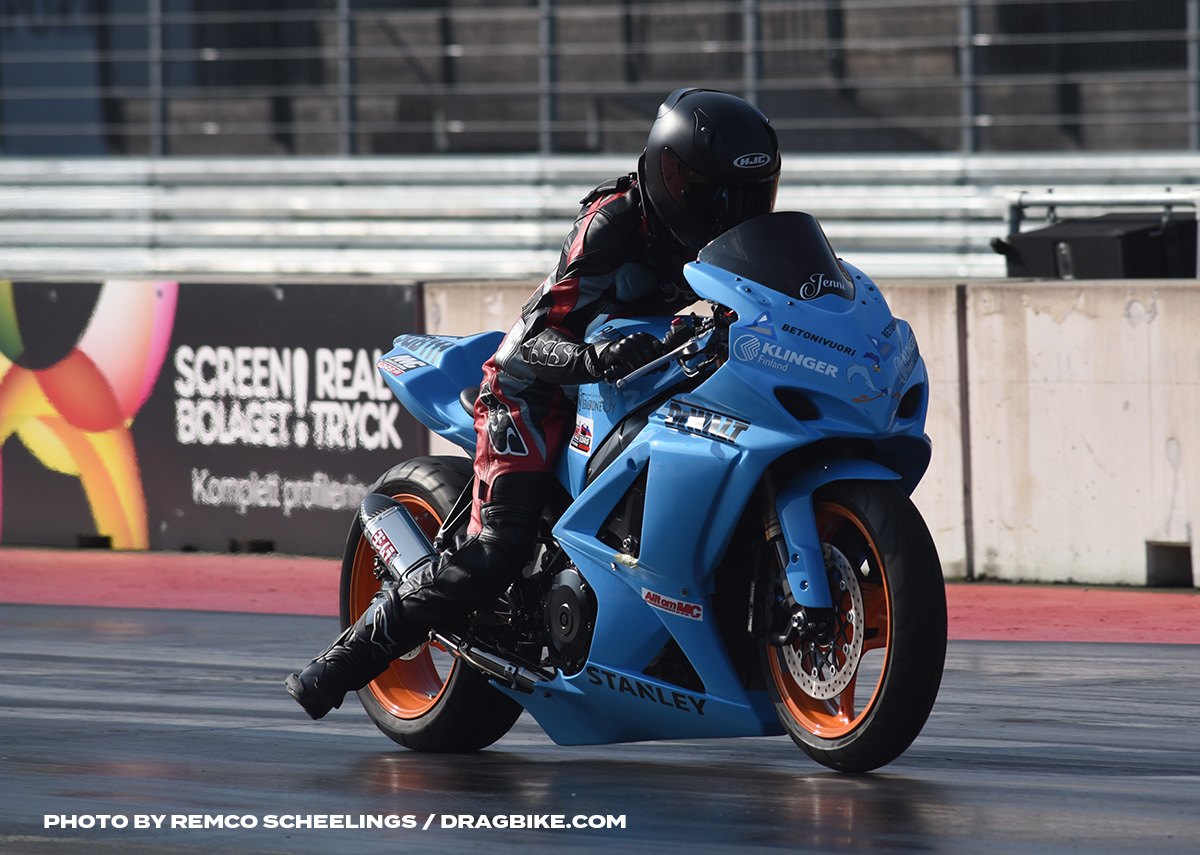