On the Salt with Senior Editor Tom McCarthy

The number of motorcycle entries for the 2021 Speed week, August 7-13, topped off with 114 entries during the seven days of speed trials. Forty-two new high MPH records were achieved by racers from around the globe. Each year the annual “Speed Week” is a pilgrimage to the Mecca of high speed for racers who need to know: Who is the fastest in their respective class of racing? No matter how many wheels it has, or chassis type, or body type, the Southern California Timing Association (SCTA-BNI) has a class for that machine.

This year the condition of the salt was said to be “the best in years” by experienced hands who were out on the salt in July, preparing the three racecourses. Each lane of racing serves a specific need. 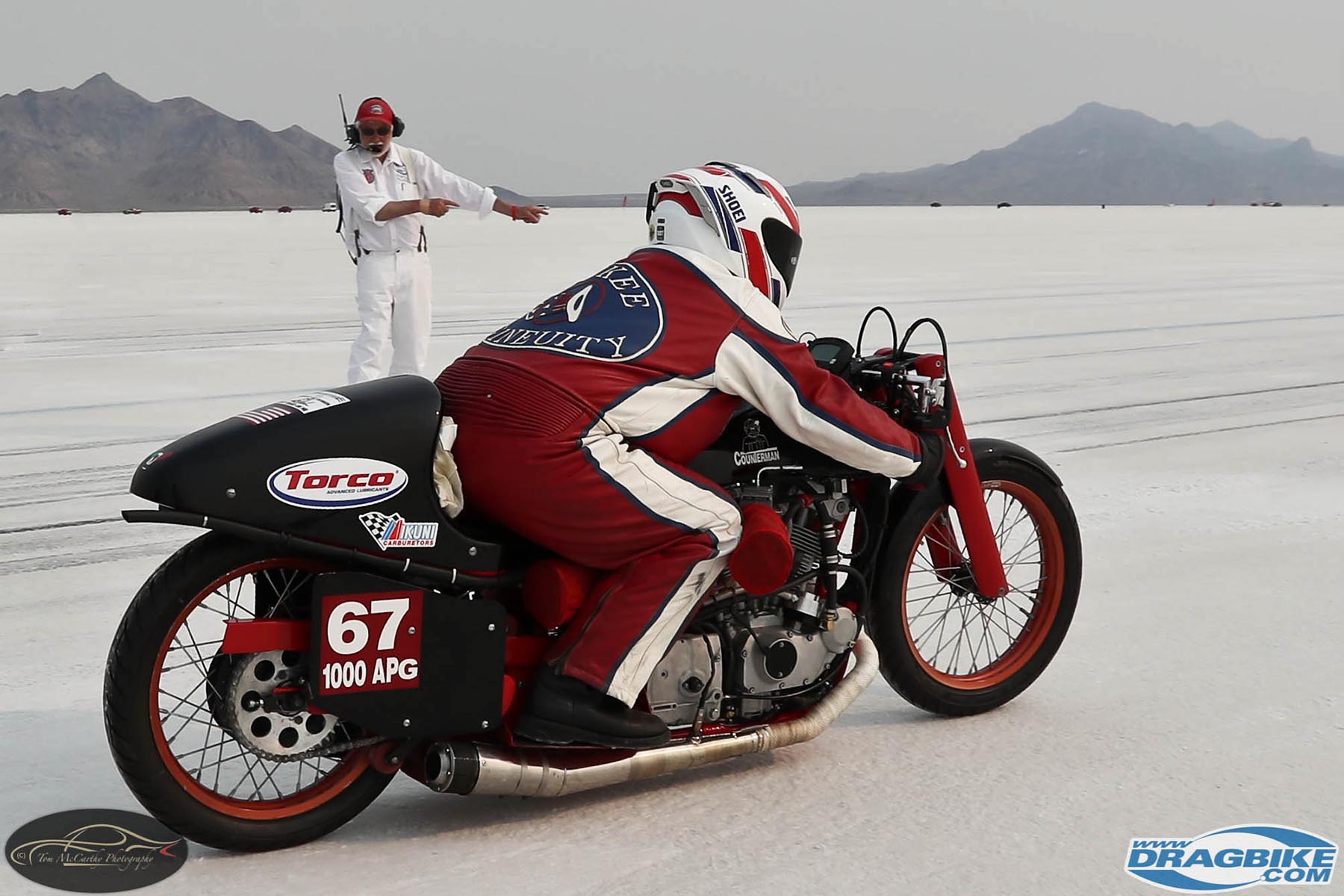 Any machine with a Land Speed Record in excess of 175MPH must race on the 5 mile timed course known as “The Long Course.” Including the speed-up and shut down. That course, in 2021 comprised 9 miles of prepared racing surface available for machines this year. Five miles of the course is timed.

Course #2 was also prepared to a distance of 9 miles, but course #2 is reserved for machines with records under 175 MPH.

Course #3, the rookie course, is for teaching and qualifying new contestants on proper Land Speed Racing procedures. It’s intended for taking the entry-level steps of earning a competition driver’s license to begin becoming qualified to race on the Bonneville Salt Flats.

Rookie drivers will have an R affixed to their helmets initially and are required to undergo sub 150 MPH runs, in progressive stages, on Course 3. Basically, the rookie course is 3 to 4 miles in total distance and 100’ wide. Machines are timed beginning at the 1-mile marker through 2 miles and as far as the 2 & ¼ mile marker for 2021, on the rookie course. There are full logbooks that need to be kept by every racer and licensing for advanced speeds are signed off according to SCTA procedures, spelled out clearly in the SCTA rule book. 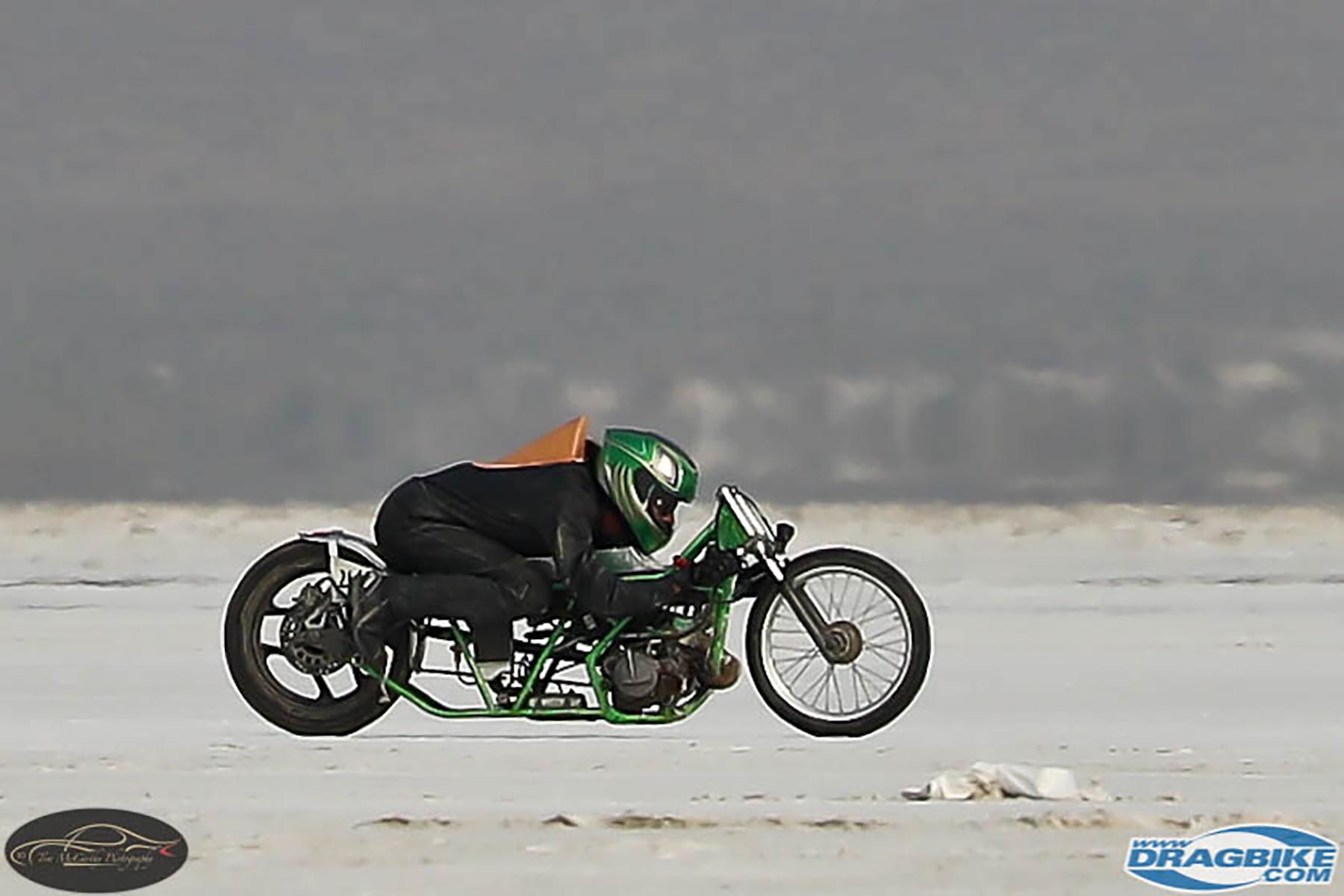 Veteran racers who’ve been to the salt multiple times may hold several different licenses for different vehicles and different speeds. Be advised racing at Speed Week takes great care and preparation, so if you are a first-time racer, going to Speed Week to compete, you have a LOT of homework to do and paperwork to comply with. DO YOUR HOMEWORK, before going out to the salt for first-time competitors.

Know this: any first-time racer, going land speed record racing will be drinking from the fire hose of knowledge in preparing for their initial Speed Week. Every racer has done this and made it out onto the legendary race-course – so can you.

For spectators or racers; anyone who’s never been to Speed Week, if you’re a racing fan or a veteran racer, at least once in your life, you need to attend Speed Week. Only after you’ve ordered breakfast and had coffee, while a 400 MPH streamliner goes screaming by, pounding out its high-horsepower song just after sunrise, have you had a racer’s breakfast. It’s a speed freak experience not to be missed.

The SCTA-BNI staff is 100% volunteers. They do this year after year, of their own accord. Their devotion is a tribute to their love of the sport, and genuine passion for racing. They are truly dedicated to this. The Southern California Timing Association held it’s first annual meeting on September 29, 1937. They are the oldest official racing sanction in the United States. They know a thing or two about going fast. 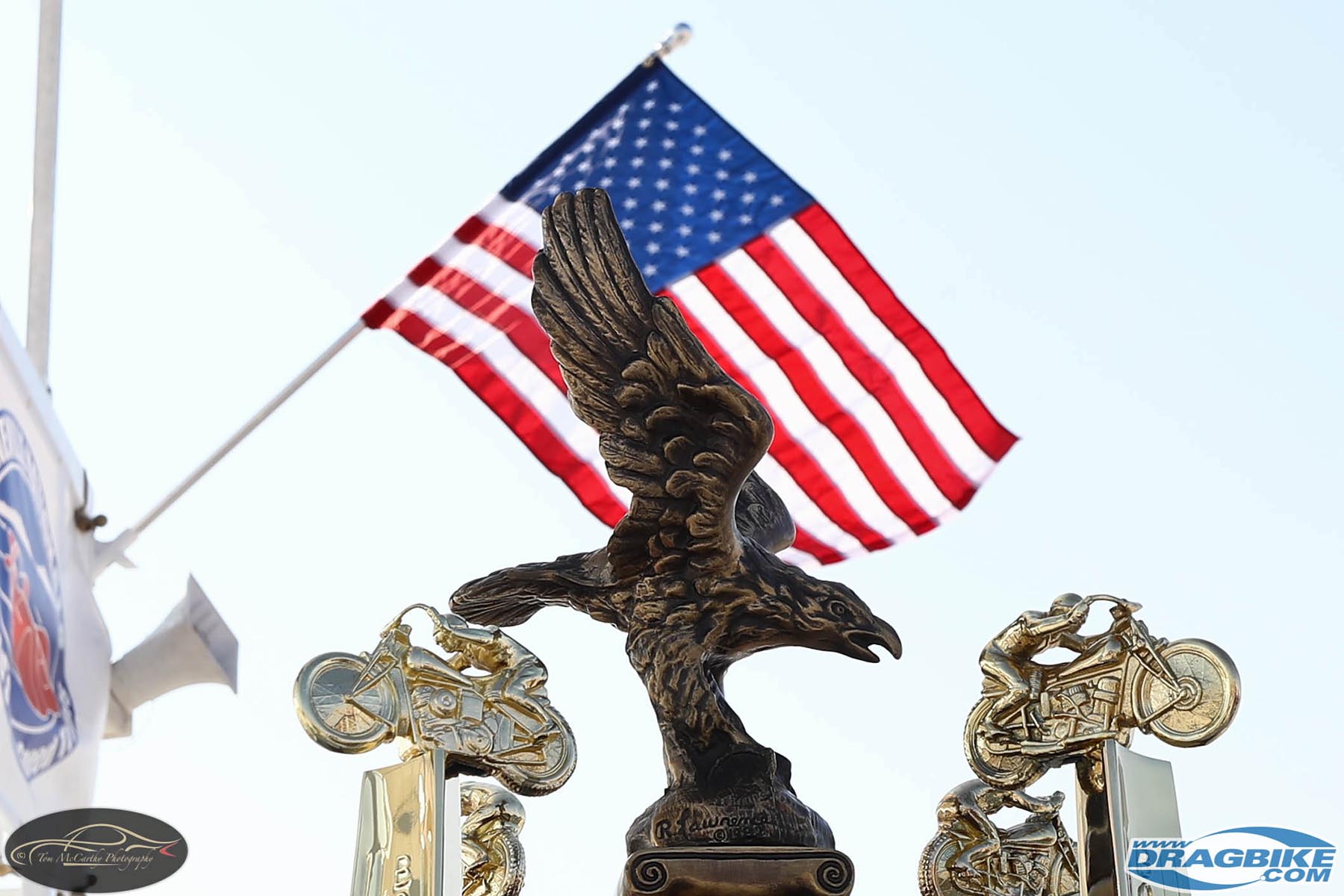 The SCTA is a hardworking bunch, who take their jobs seriously to heart and enjoy it. For the most part, many of them are former racers – so they know what the racers are going through. Racer’s health, safety, and welfare mean everything to them. It’s every official’s goal that everyone goes home safe and sound at the end of the race day. Most of the racecourse officials I spoke to in 2021 have all been coming to the salt now for well over a decade, some twice that number.

This year’s field of motorcycle racers competing for new Land Speed Records included 114 entrants. The seven days of racing on the salt this year saw motorcycles make well over 100 passes. Record runs are achieved when a racer runs on or above the existing record for a specific class, on an initial run down the course. The timing tower will announce if the run qualified for the first “leg” of the record. They will also tell the racer to “Take it to impound.” 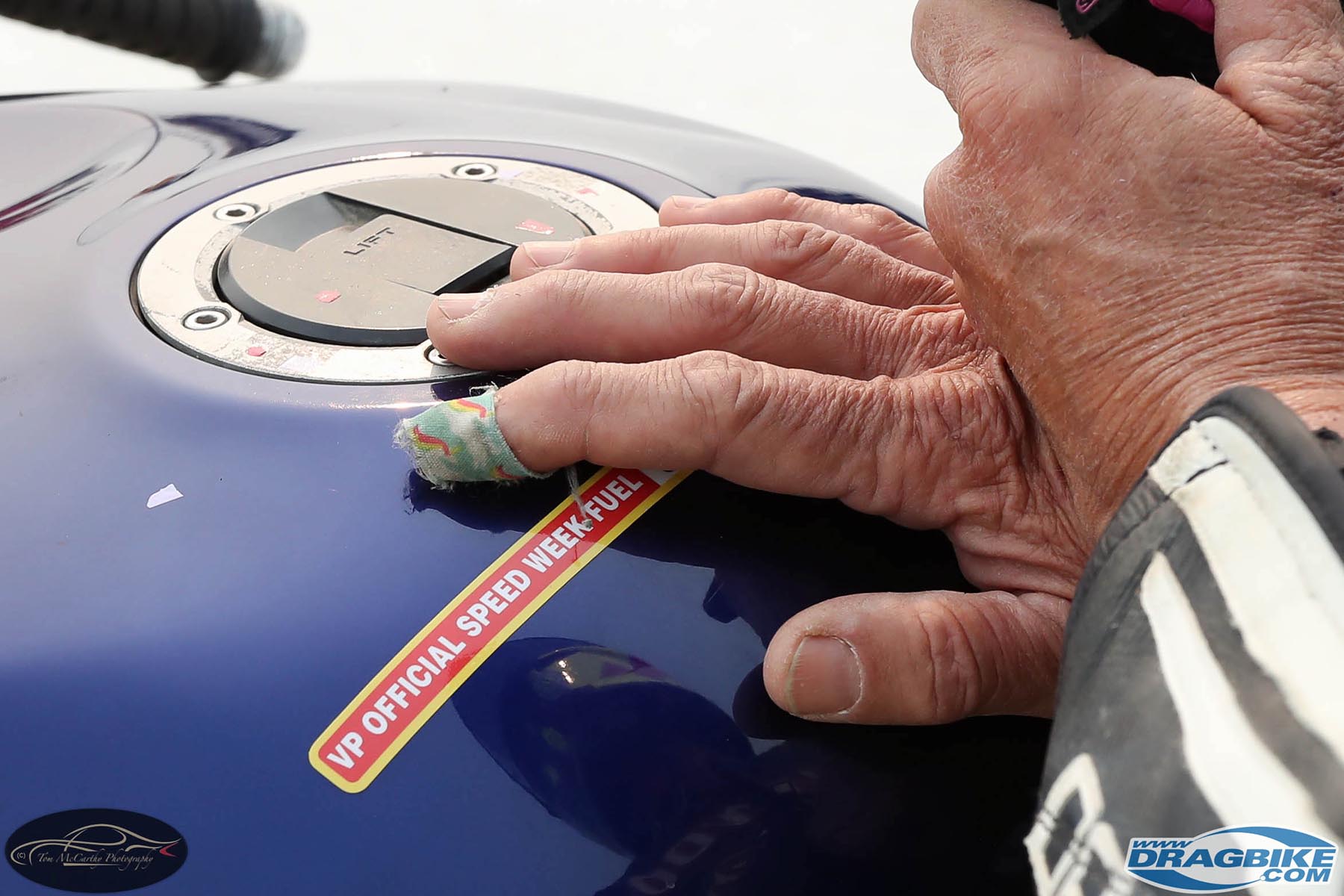 The prospective racer and machine need to go directly to the impound corral after exiting the racecourse, so Tech Inspectors can verify that the machine was compliant with class requirements during its pass. The machine is then confined to impound overnight and can’t be removed from impound for any reason or the first half of the record-run is negated.
During the course of the prospective record run, if the new record speed is achieved while being timed exiting, for example, the 3-mile marker; that’s where the new record mark will have to be backed up on the very next run. While machines are timed between 1 to 2 miles, 3 to 4, and 4 to 5 miles: rules require record runs to achieve record-setting speeds at the same location on the racecourse each time. The two-way average of the two speeds becomes the new world record mark in that class, providing of course it exceeds the previous mark.

Record Runs at a Glance

The fastest record set by a motorcycle during Speed Week, 2021 was recorded by the Guthrie-Levie team, racing their SCS – Side Car Streamliner, 1650cc machine to a two-way average speed of 238.754 MPH 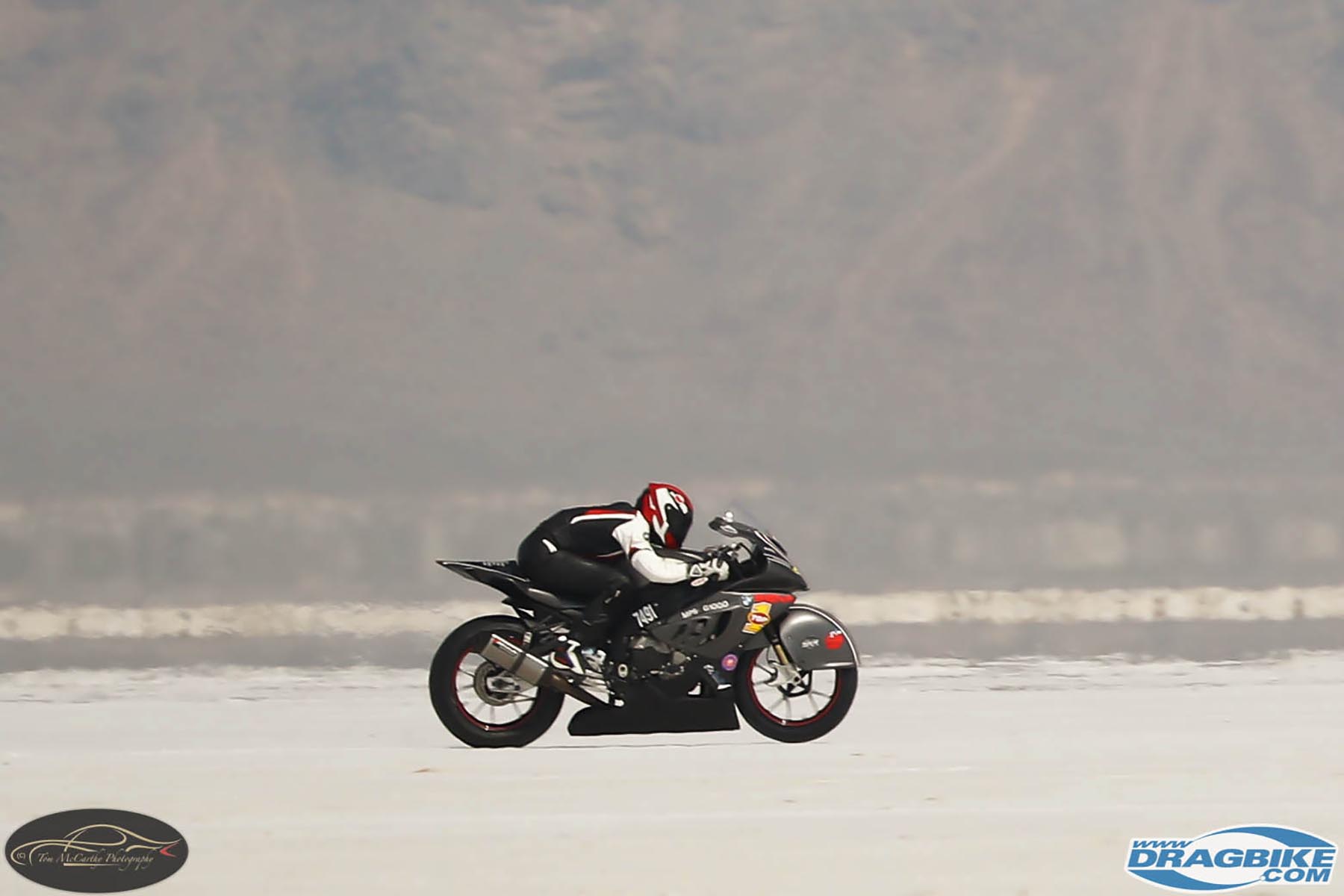 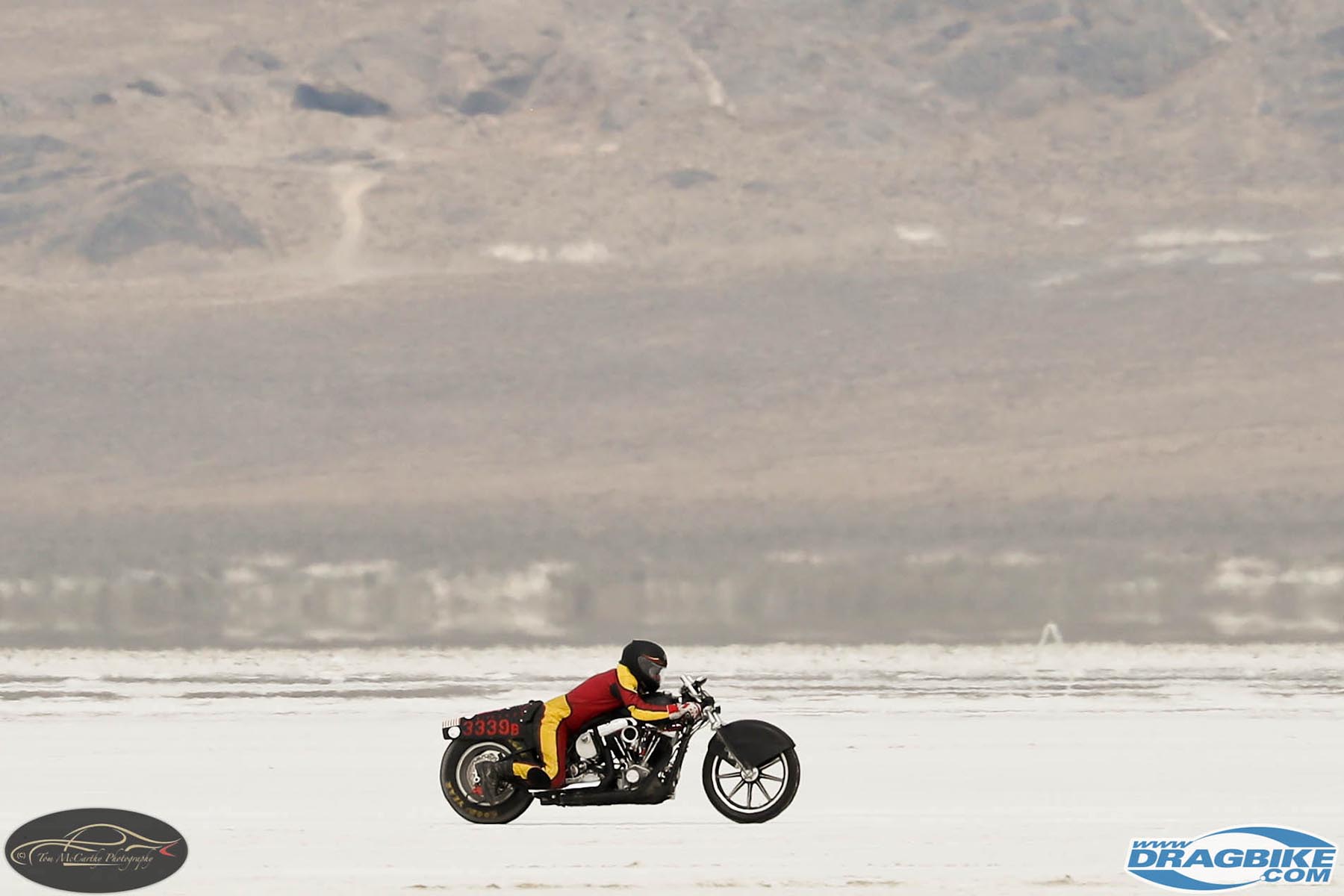 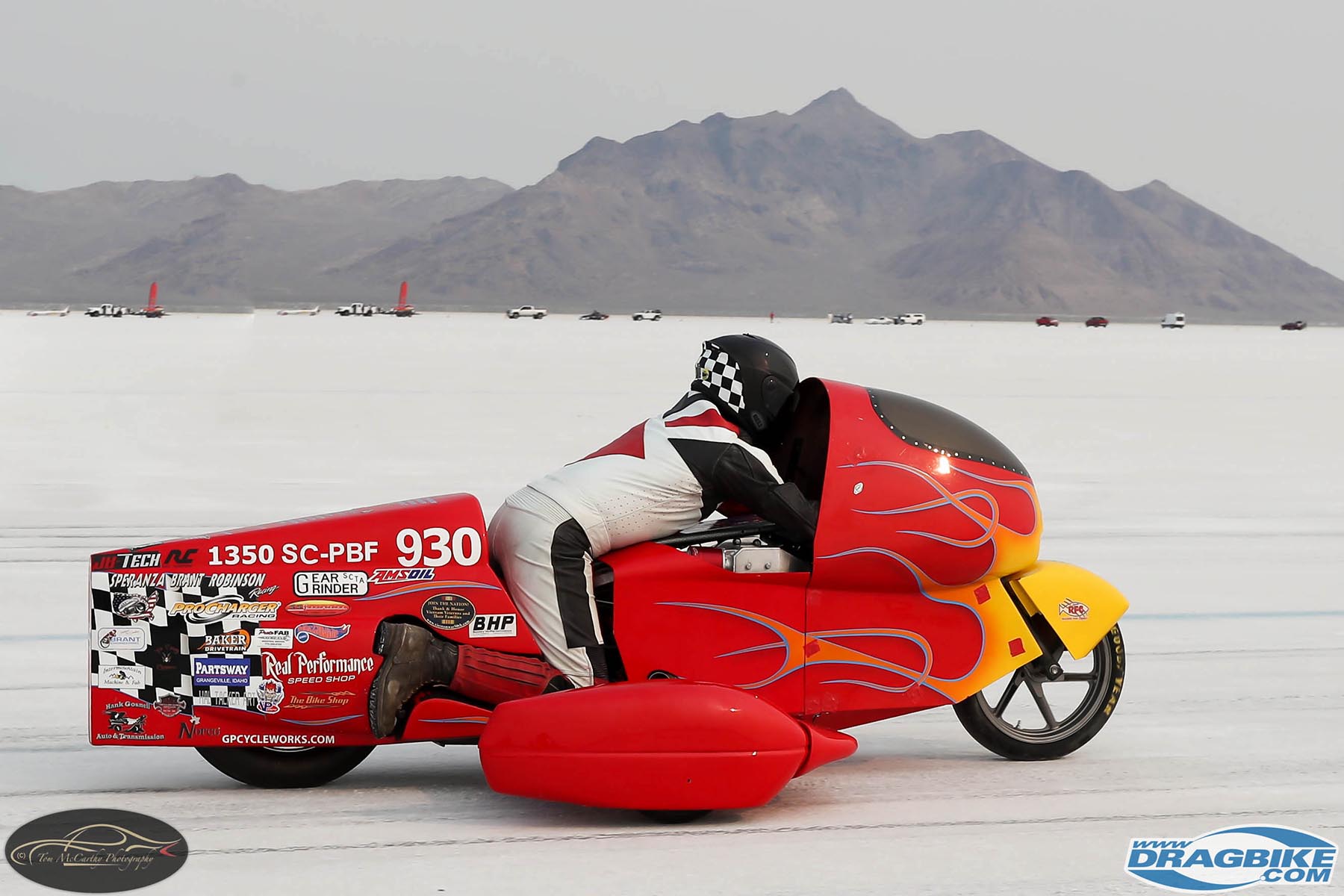 The beautiful Spreranza, Brandt, Robinson, SC-PBF bike topped out at a 174.051 MPH 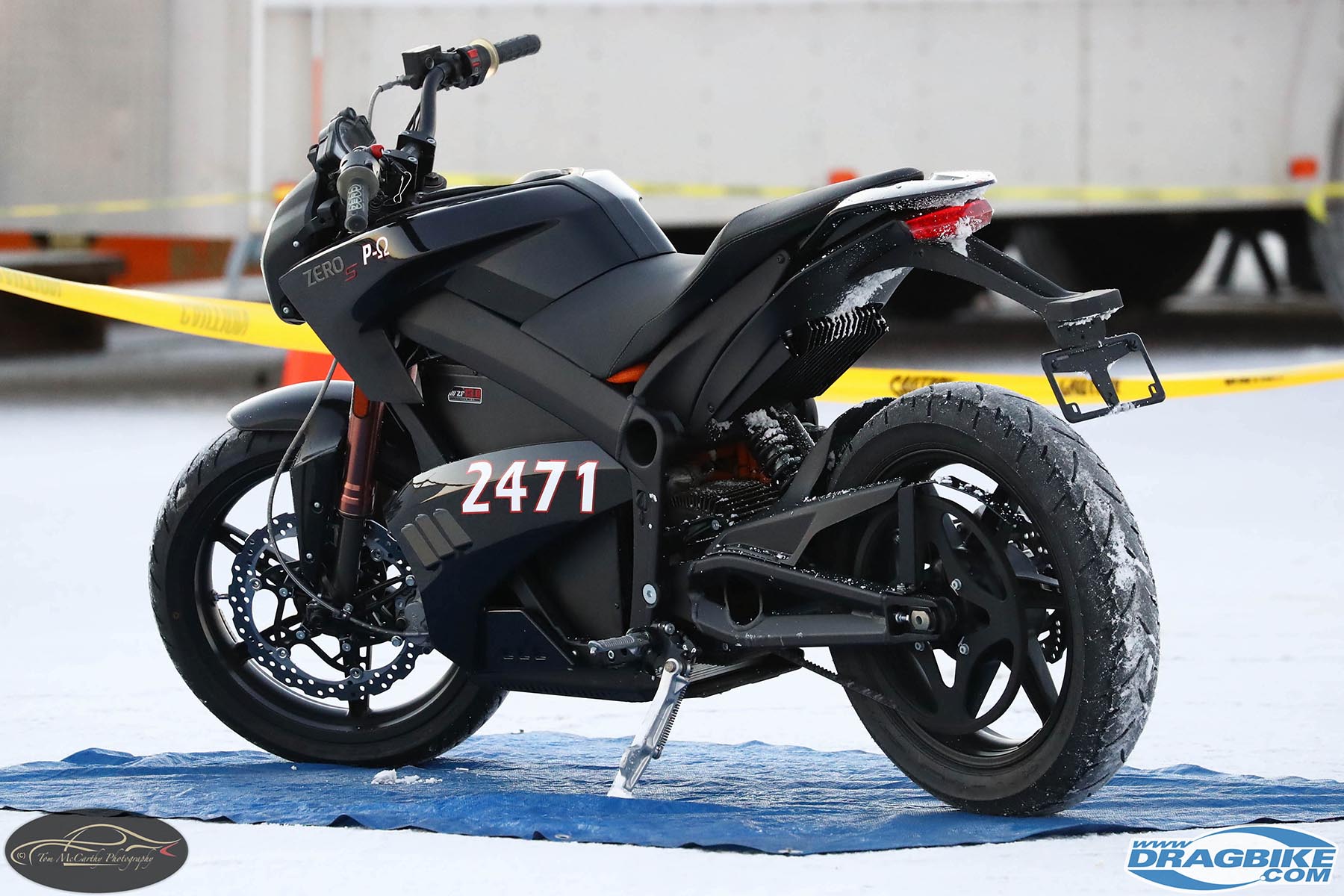 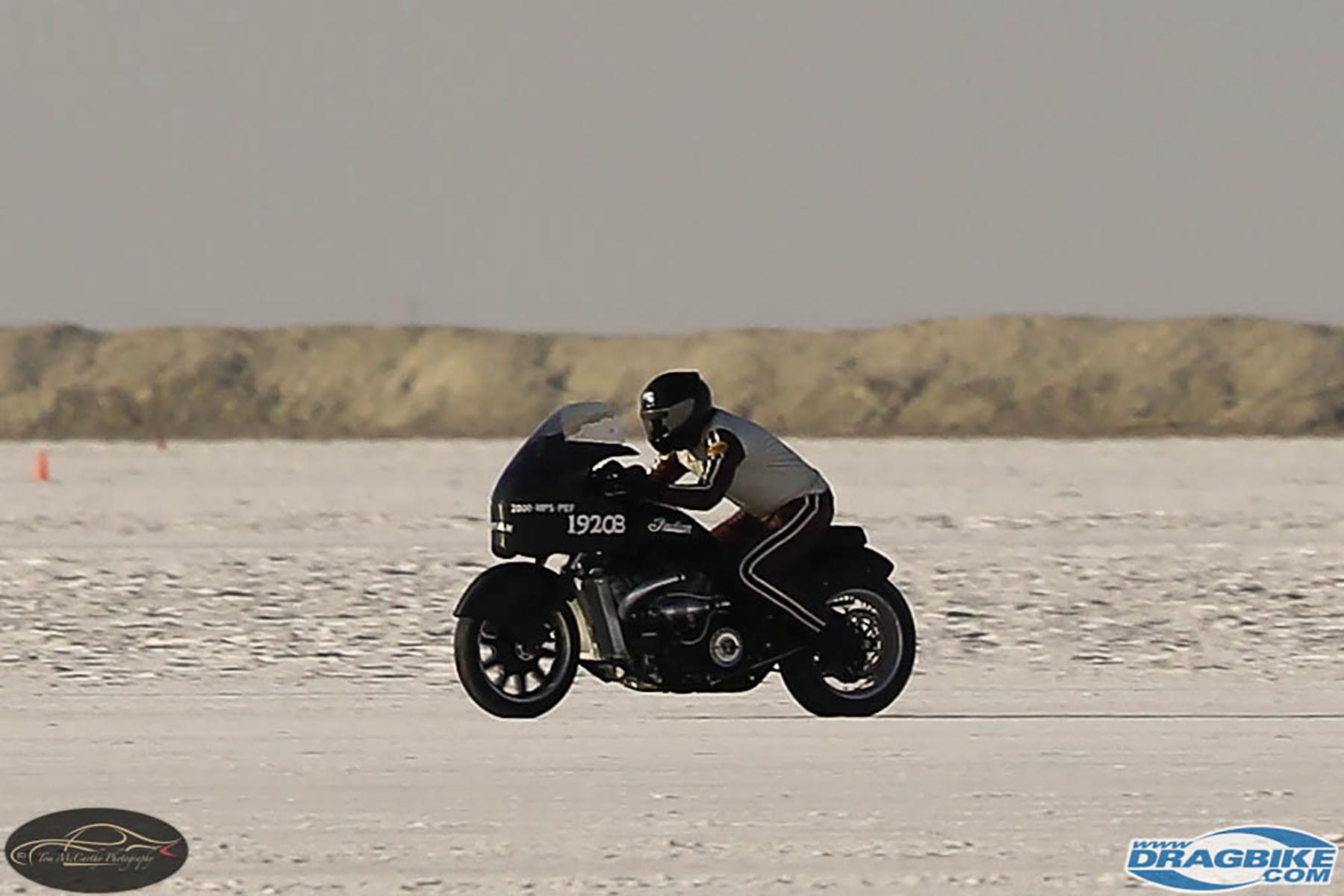 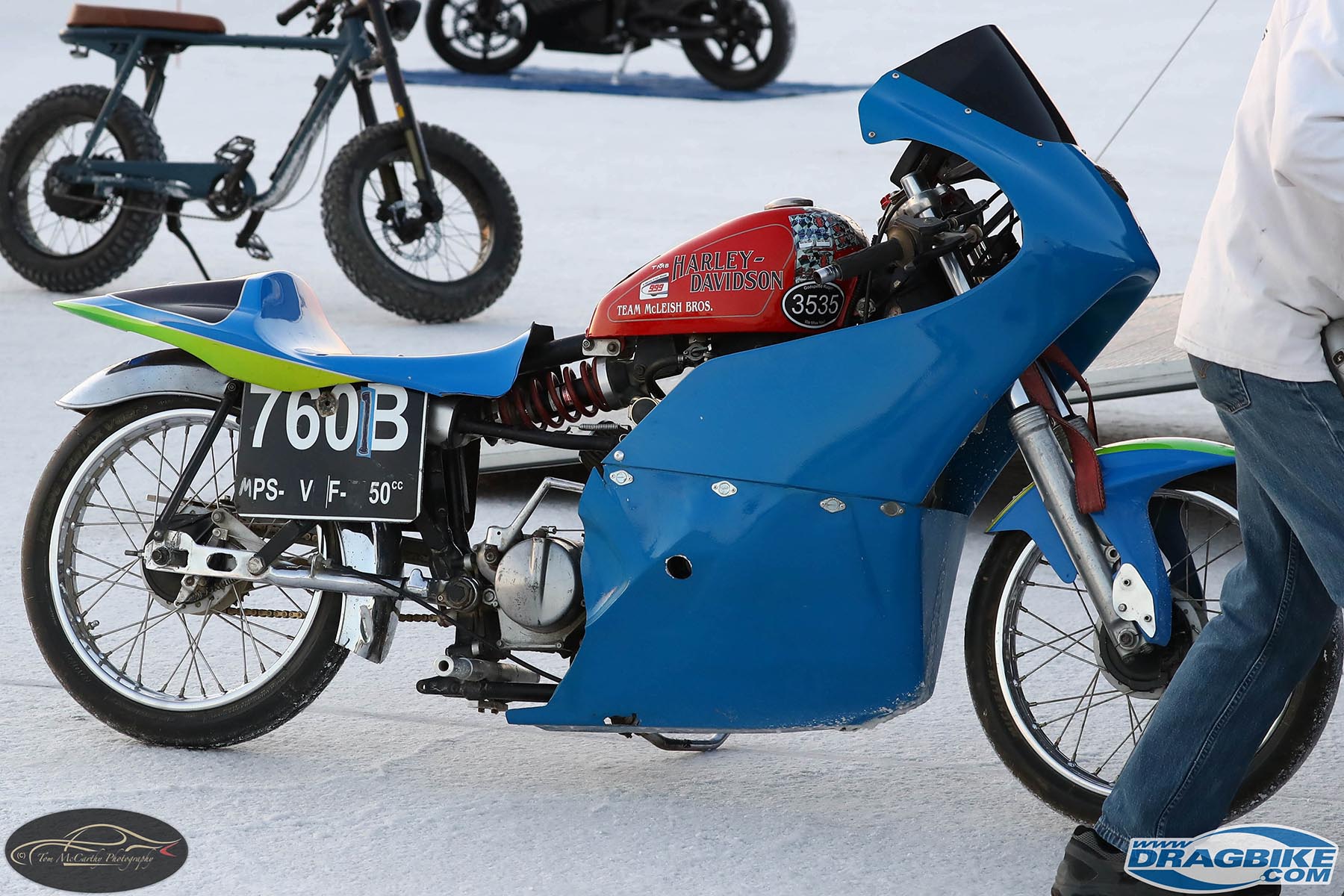 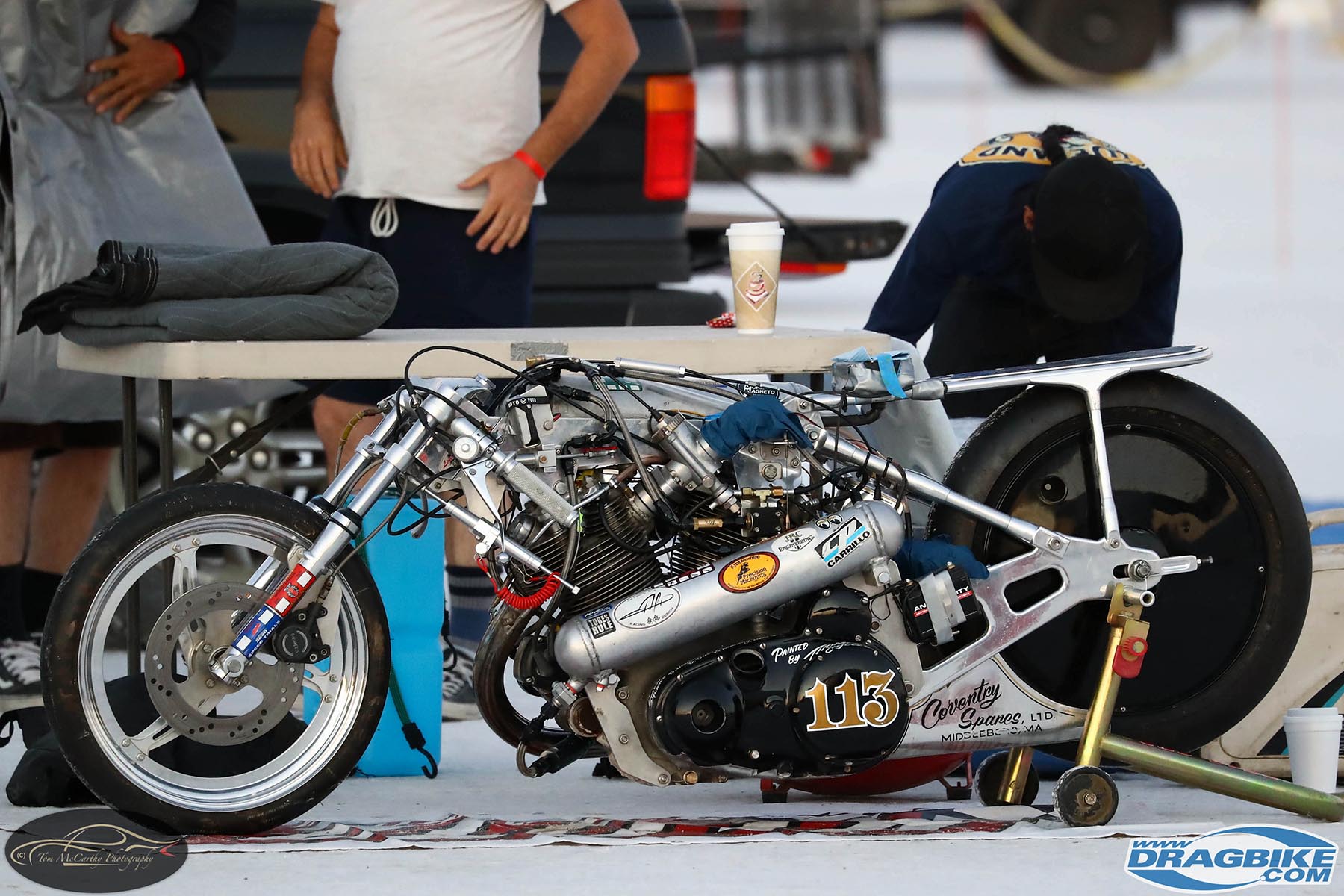 This beautiful 1948 Vincent, prepared by Alp Sungurtekin, of LA, had an initial shakedown run top speed of 191.360 MPH recorded, but a fuel pump failure prevented a backup run. 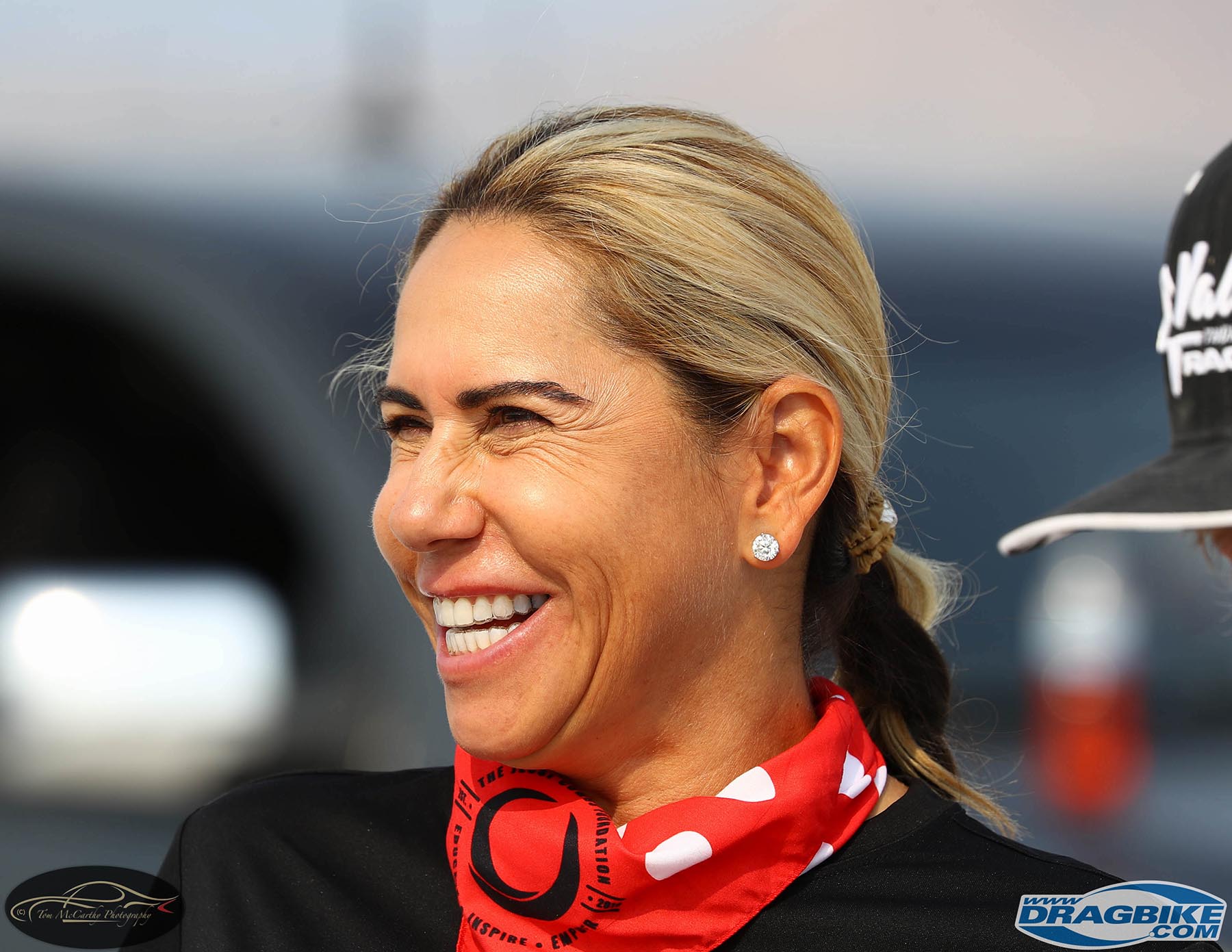 Valerie Thompson was on the salt for Speed Week 2021. Her team Turbo-Tiger Racing and spent the week chasing gremlins. Without question, this veteran Salt racer will be back in 2022! 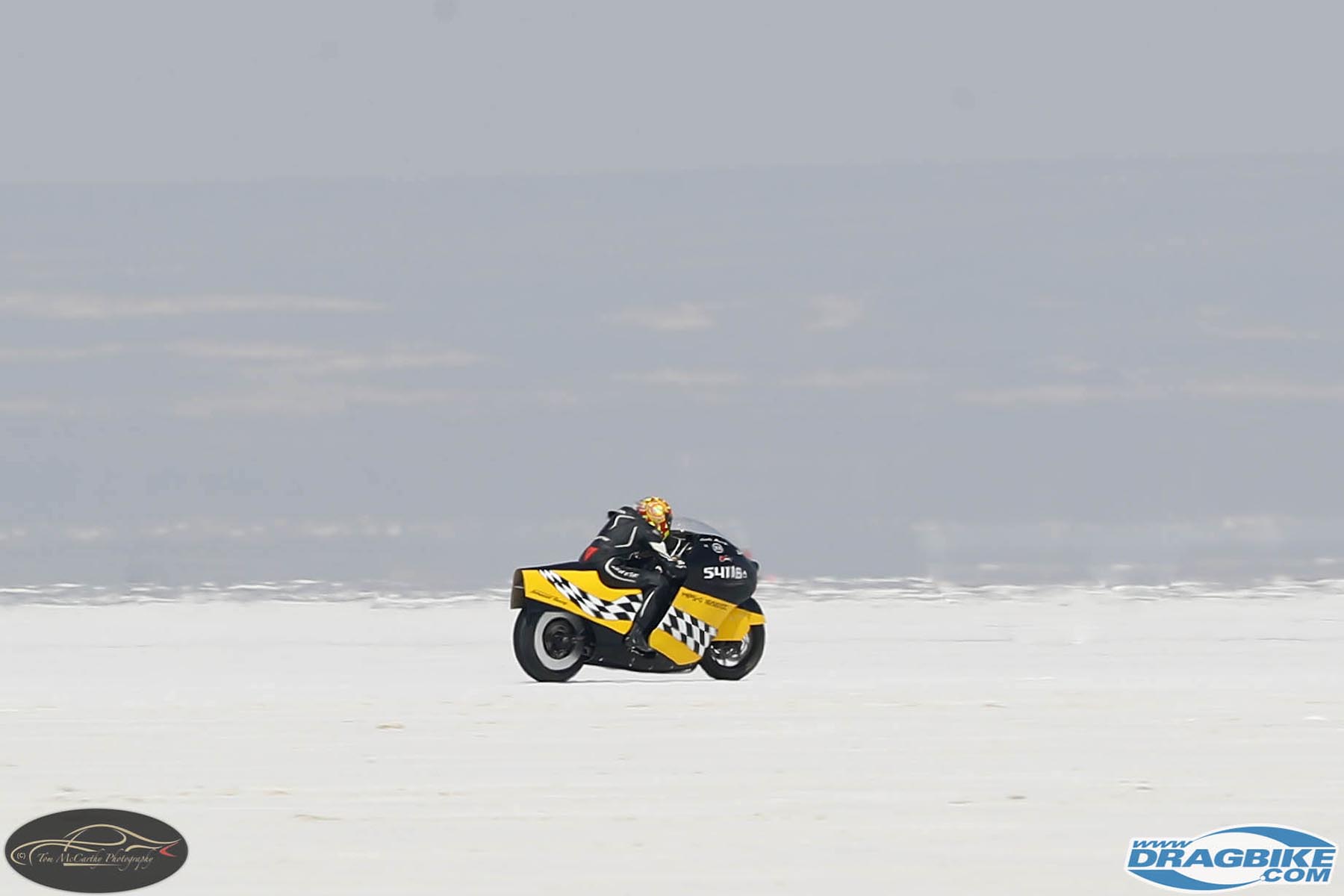 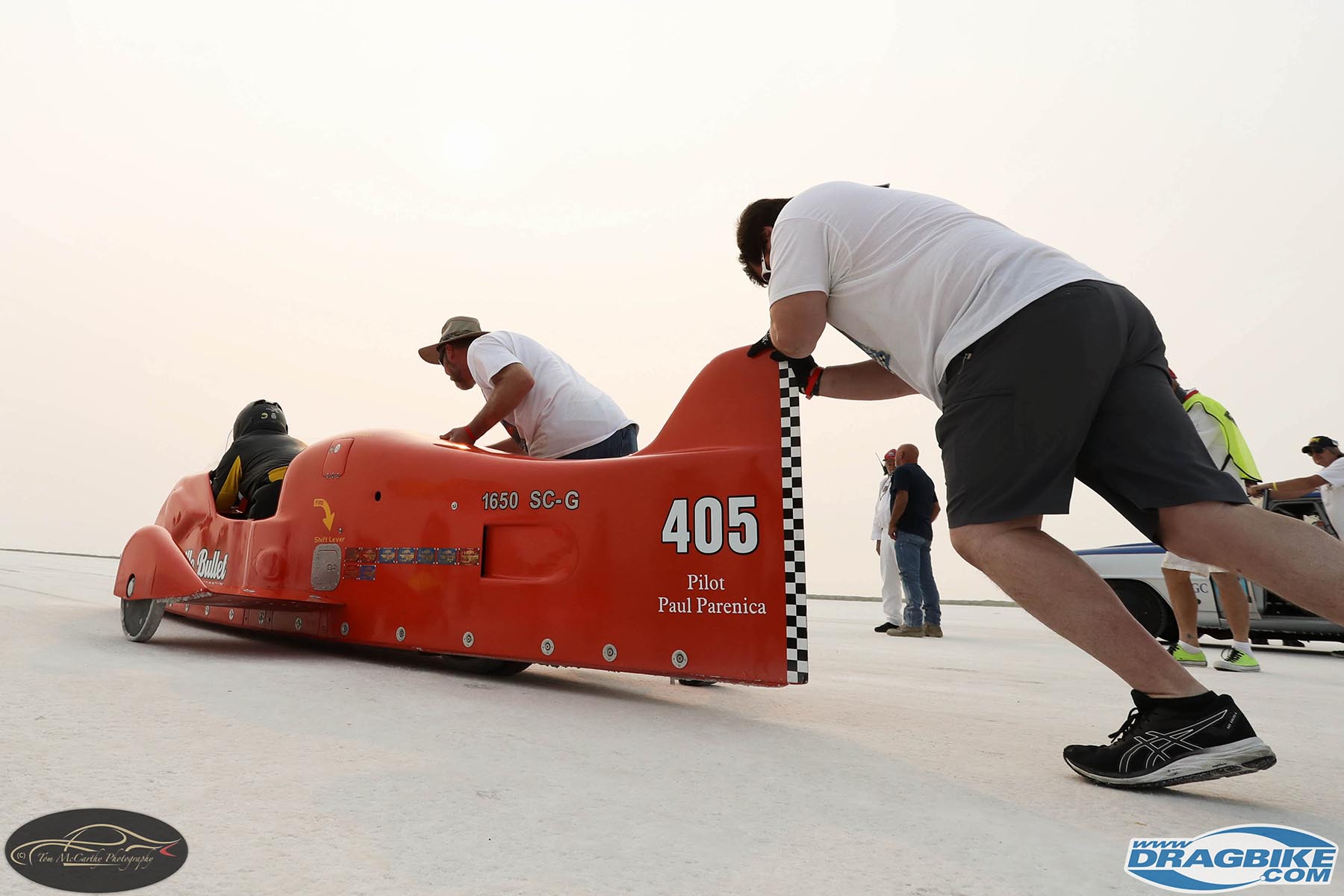 Land speed racer Paul Parenica recently bought this beautiful SC-G sidecar bike from veteran Wally Kohler of New Mexico. The 1534cc Kawasaki has been as fast as 230 MPH with Wally driving it, now it’s Paul’s turn in the hot-seat. Learning the ropes from a veteran Salt Flats racer is always a wise choice in land speed record racing. 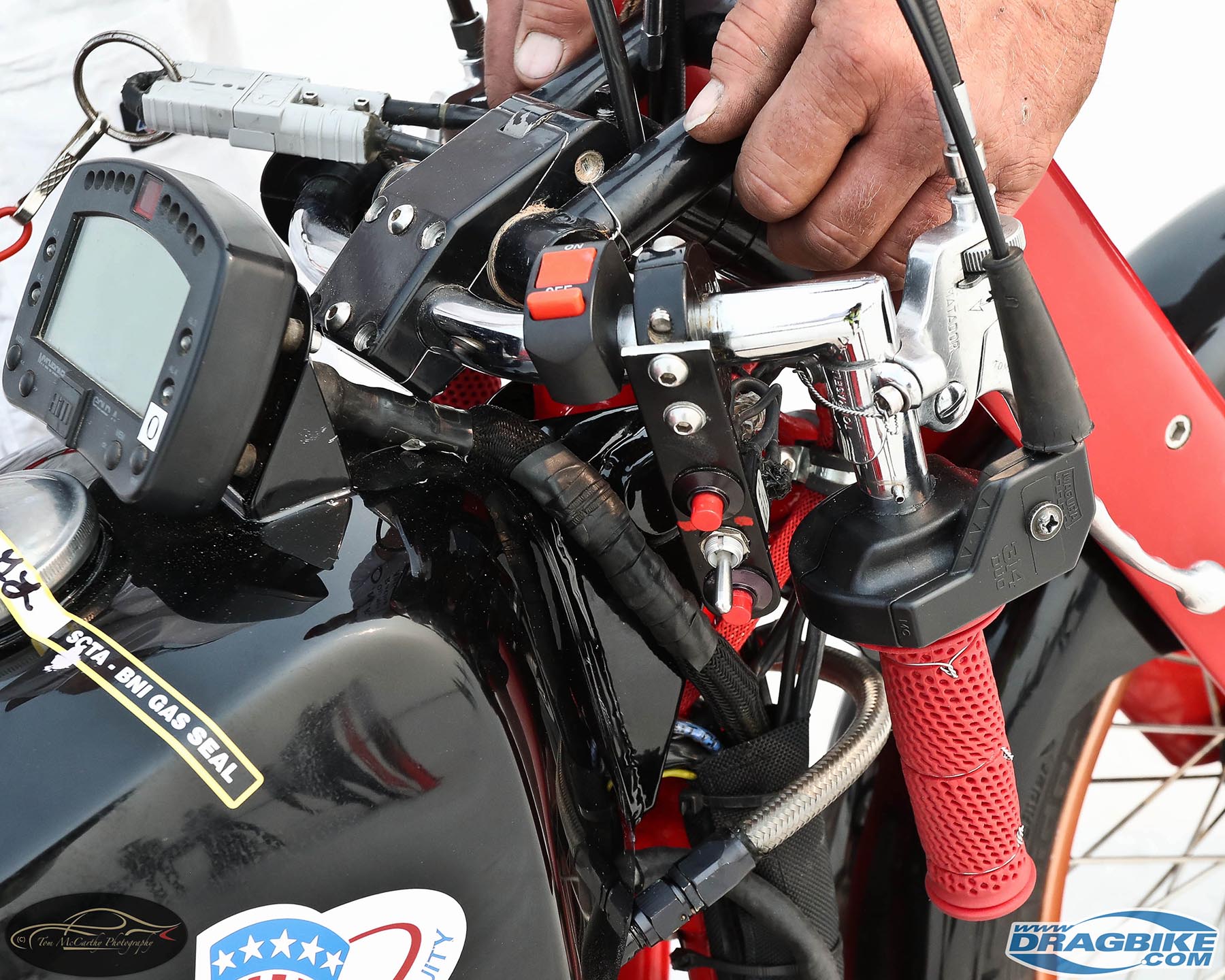 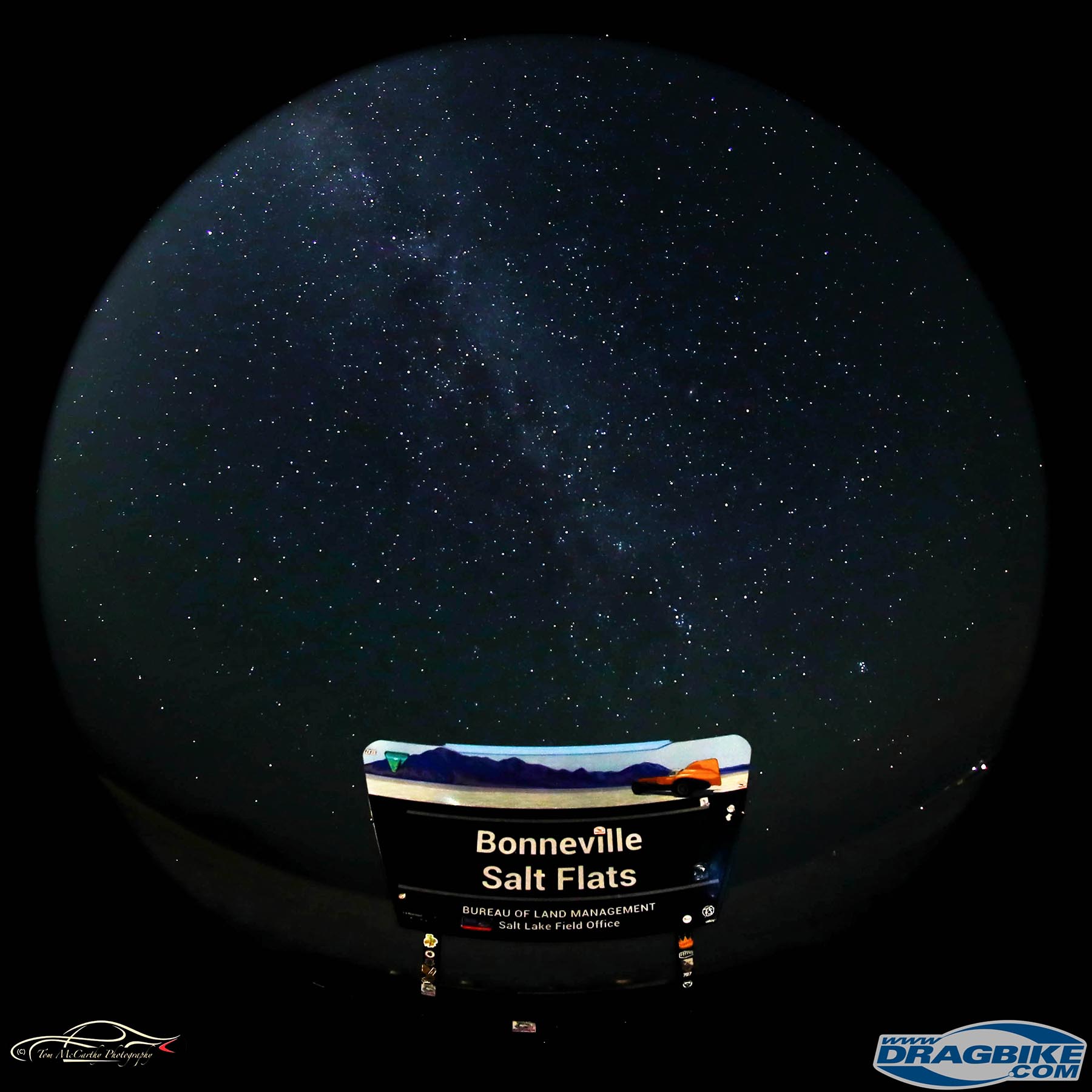 Bonneville Land Speed Racing is a unique sport that consists of very determined people who drive hot rods, roadsters, belly tankers, lakesters, motorcycles, streamliners, and even diesel trucks to “shoot the salt” in a simple quest to have their name added to the list of many record holders. Many years ago, the Bonneville Nationals Inc. (BNI) was formed. It’s main focus would be to produce the annual “Bonneville Speed Week”. The BNI hosts a spectacular week of racing each year in August, which is the highlight event of the LSR season. Speed Week consists of six days of racing (Sat – Fri), weather and conditions permitting. Entrants come from all over the world to participate in the week-long event. Spectators are allowed to walk through the pits, view the vehicles, and talk to the drivers and crew members. Public parking is south of the pit area, on the west side of the race track, outside the cones. Be sure to bring a hat, dark glasses, sunscreen and shade from the sun. Don’t forget a camera with lots of film/memory/tapes, because you will want to remember everything you see and hear. Binoculars are also a great idea since the race vehicles are at least 1/4 mile away as they travel down the course. The salt flats are located approximately 88 miles west of Salt Lake City, UT on I-80. The spectacular scenery and racing conditions at Bonneville make it one of the most popular areas in the world for speed. The colors, excitement, people and smells are some of the reasons we race addicts return to the salt, year after year. Better known as “Salt Fever”. CATCH IT! Learn more at scta-bni.org

Save the Salt Foundation

Save the Salt Foundation is a nonprofit organization whose mission is to protect the Bonneville Salt Flats in Utah and to promote its history and motorsports legacy. The organization aspires to keep this national treasure available for future generations. Learn more at savethesalt.org