To suggest this hasn’t’ been a typical year for Eddie Krawiec would be an understatement. The four-time Pro Stock Motorcycle world champion missed the first two races of the year and then struggled at others. As a result, he came dangerously close to missing the Countdown to the Championships playoffs.

That’s all forgotten now after Krawiec rode his Vance & Hines Buell to his third Indy title. Racing against teammate Angelle Sampey in the the final round, Krawiec made his best run of the day with a 6.840 to hold off Sampey’s competitive 6.880 on her Vance & Hines/Mission Foods Suzuki.

“I feel like I finally got my head out of my butt this weekend,” said Krawiec who was also an Indy winner in 2014 and 2017. “Drew [teammate Andrew Hines] has put in a lot of work at shop and the credit for this goes to him. Man, I feel like I’m about to cry like a little baby. This means a lot to me. To have the chance to tune my own bike is special. For the crew behind me and everyone at Vance & Hines this is for you. Yeah, it’s Indy baby!”

Krawiec shot to the pole position on Friday night during the lone pro qualifying session with a 6.826 but he faced perhaps the toughest opponent imaginable when he had to run teammate Hines in round one. Krawiec survived that battle and then went on to defeat Michael Phillips and Joey Gladstone before topping Sampey in the final. 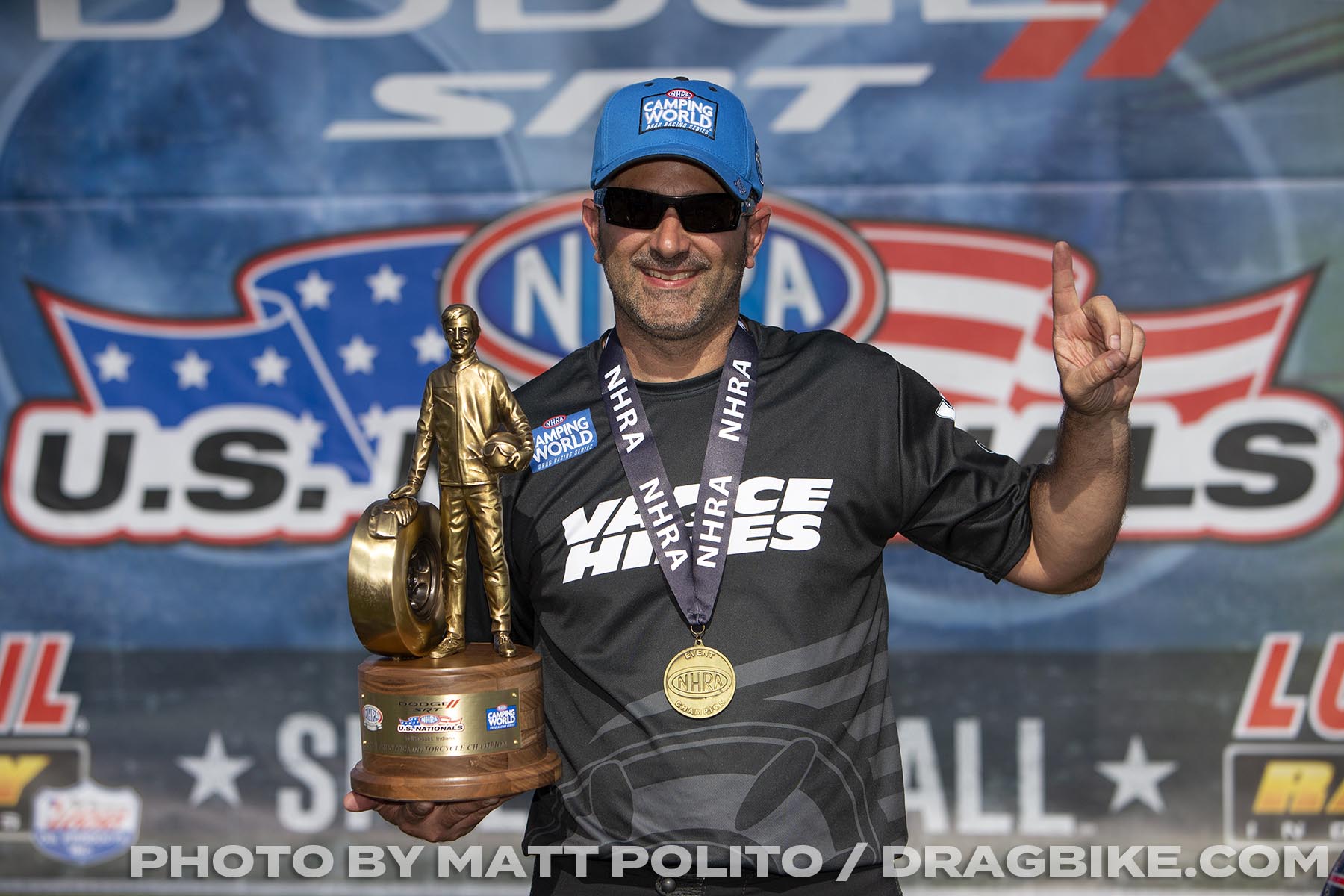 With the victory, the 49th of his career, Krawiec moved to fourth in the Countdown to the Championship meaning he’s in a prime position to claim his fifth world championship.

As for Sampey, she was fortunate just to be able to race in Indy after Hurricane Ida devastated her homestate of Louisiana. The three-time world champion had to drive to Mississippi just to catch a flight to Indy, was able to maintain her focus and went to the final following wins against Cory Reed, Charlotte winner Steve Johnson, and defending Indy champ Cory Reed.

Sampey finished the regular season as the No. 5 seed in Pro Stock Motorcycle behind Matt Smith, Steve Johnson, Pollacheck, and Krawiec. 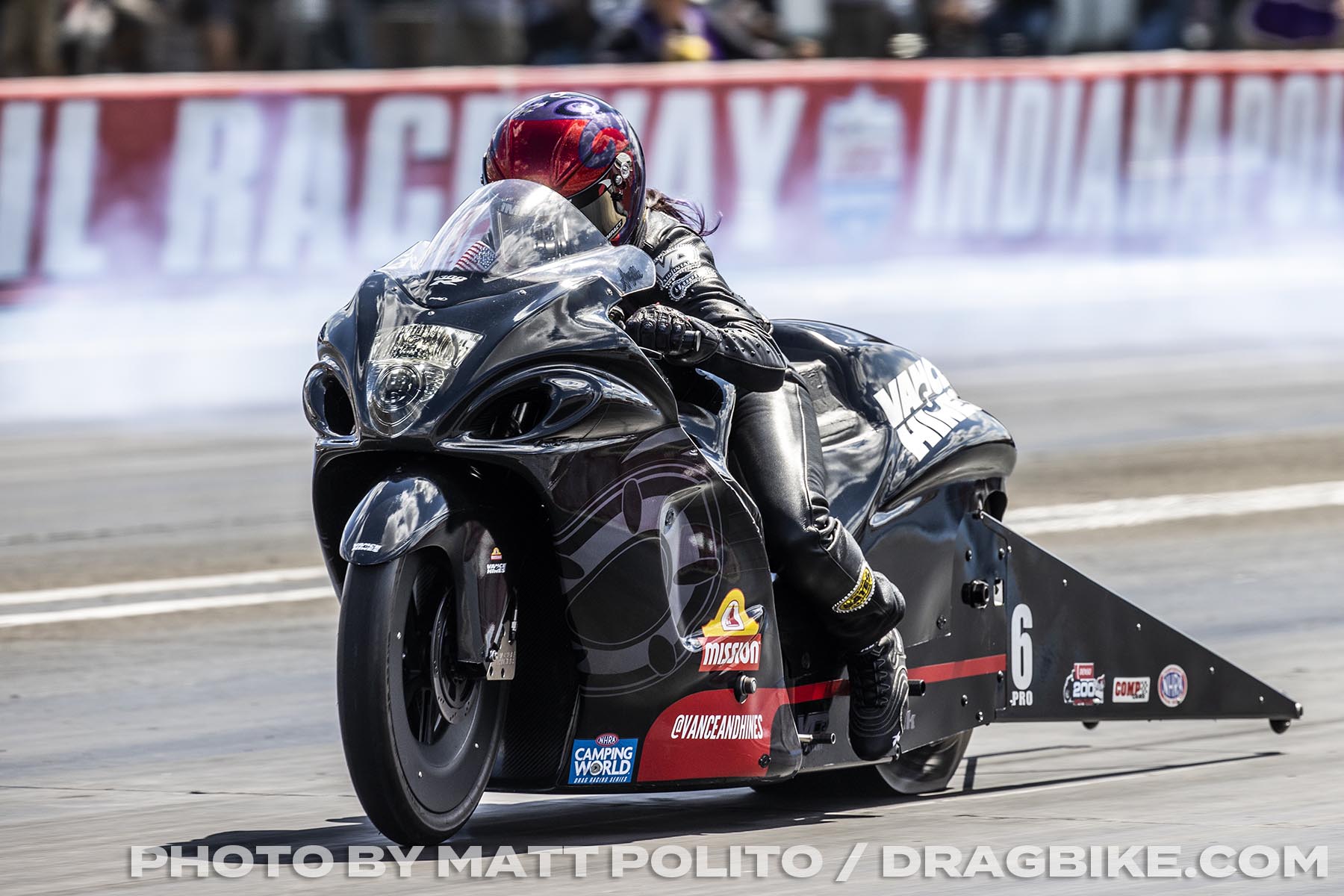 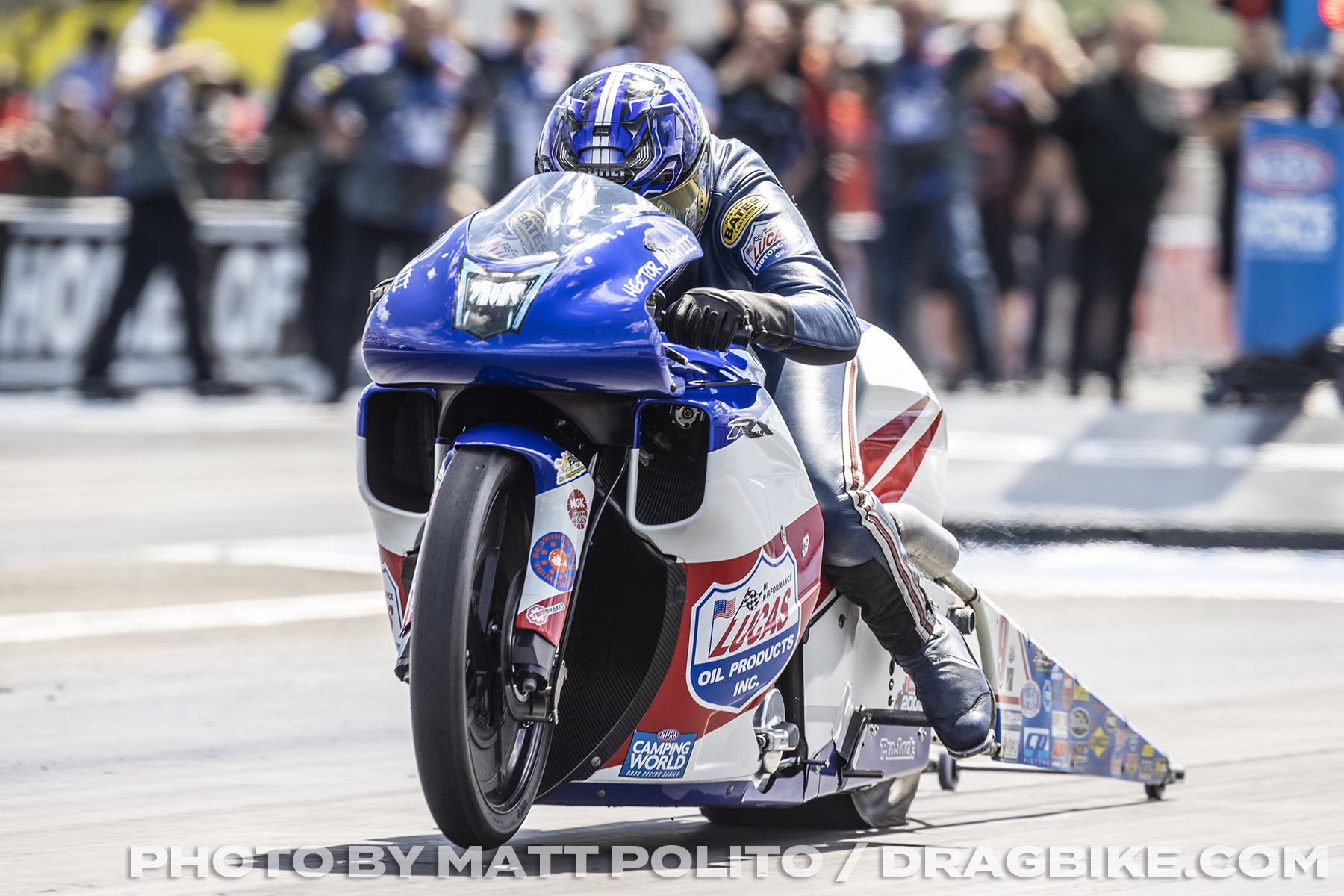 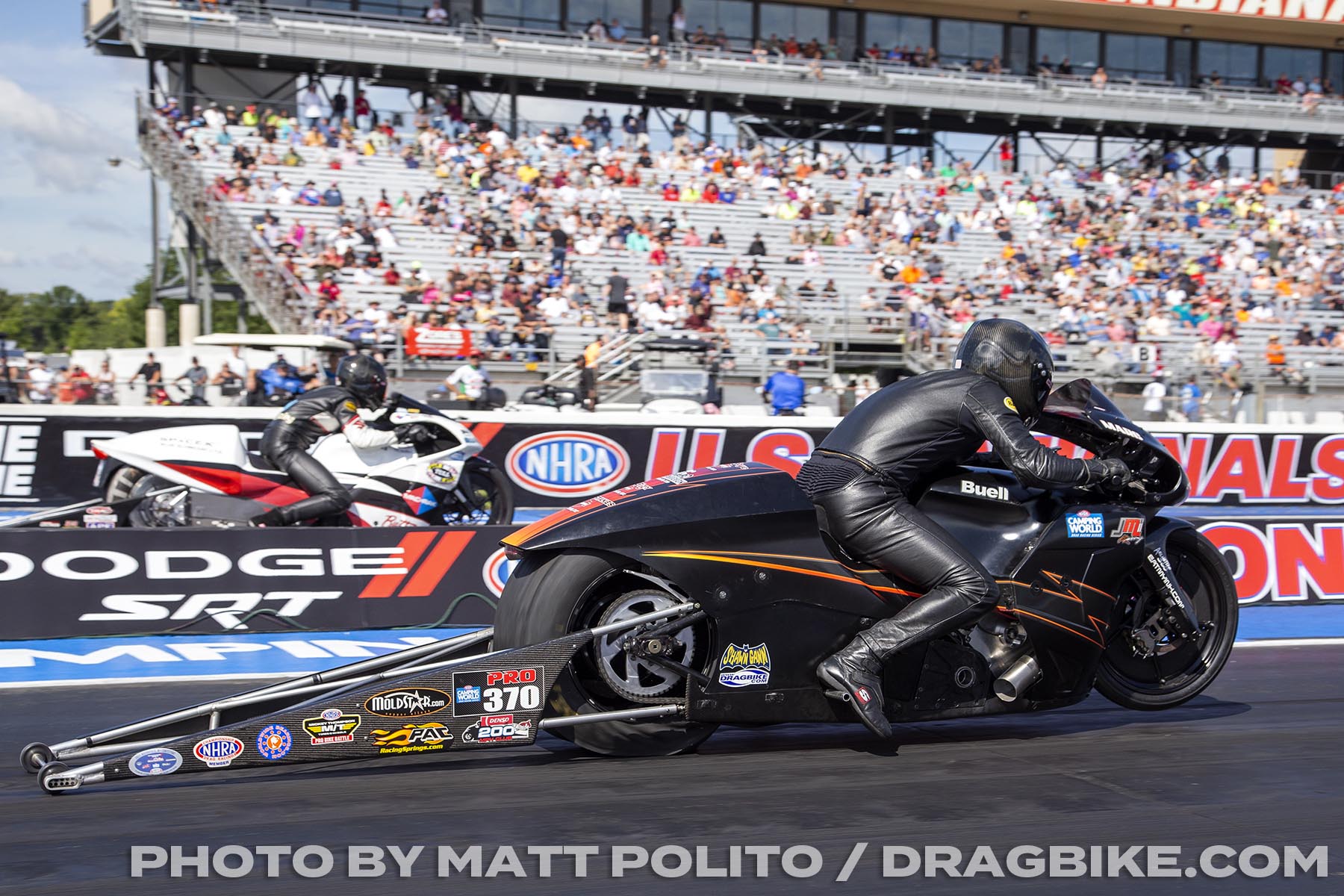 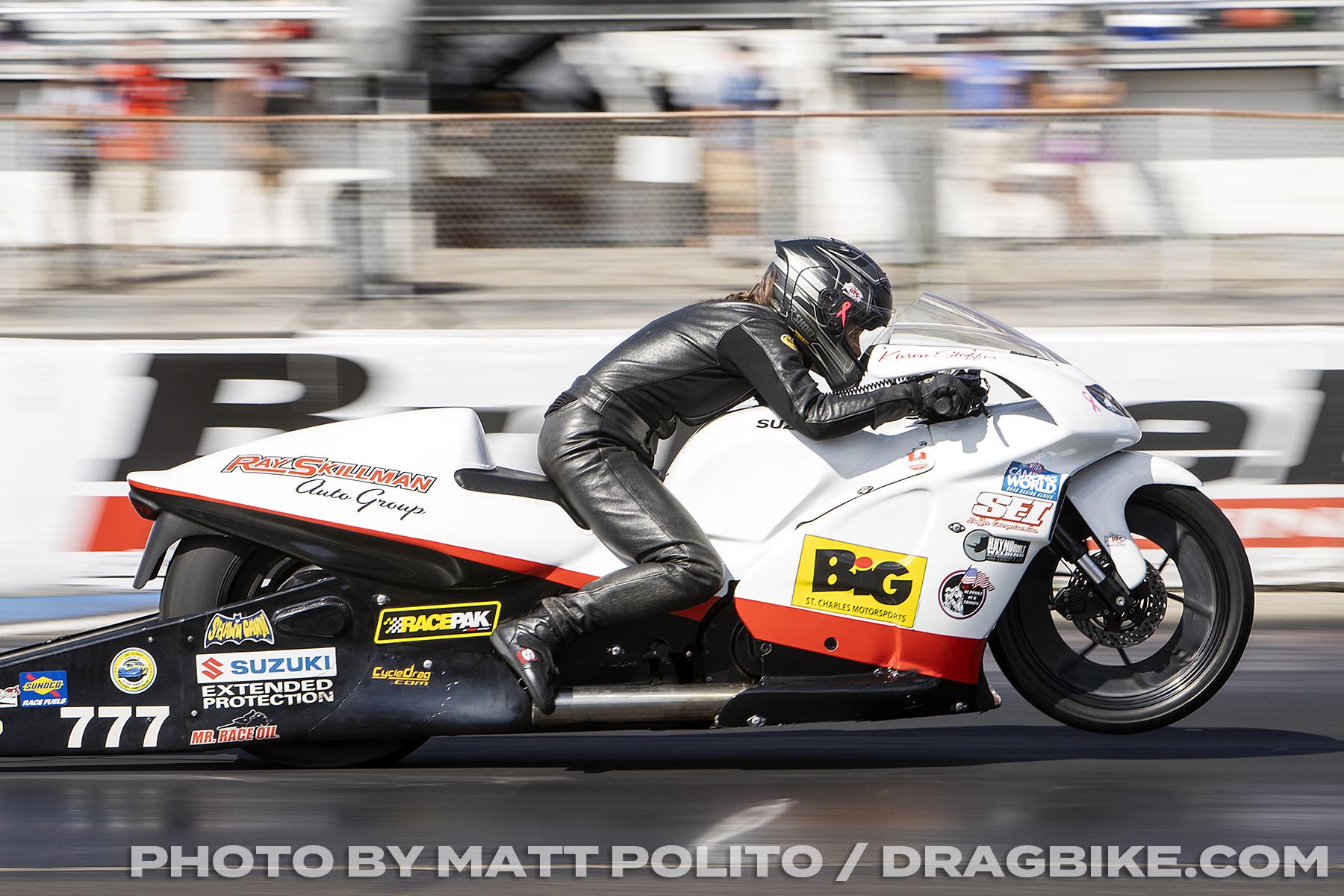 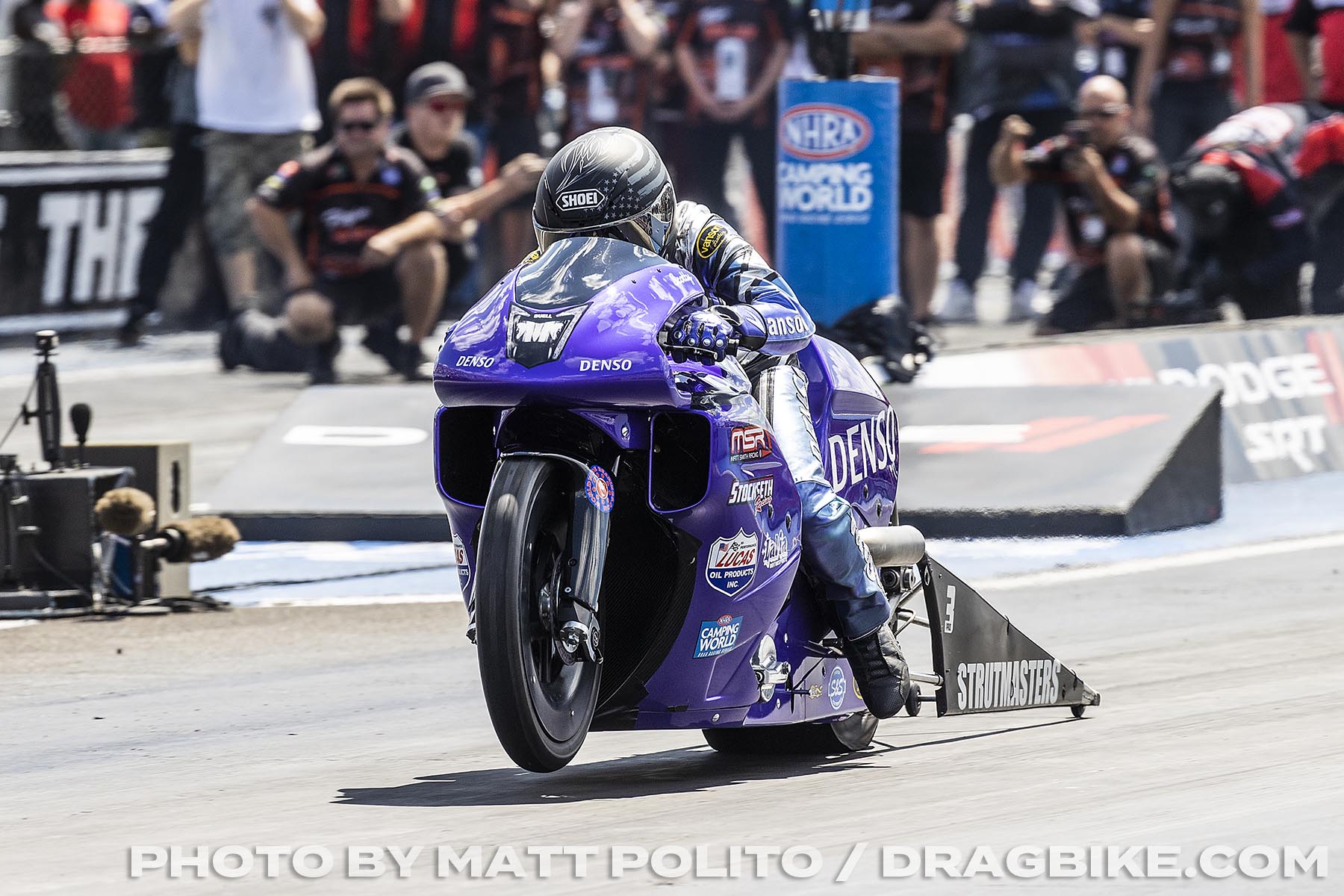 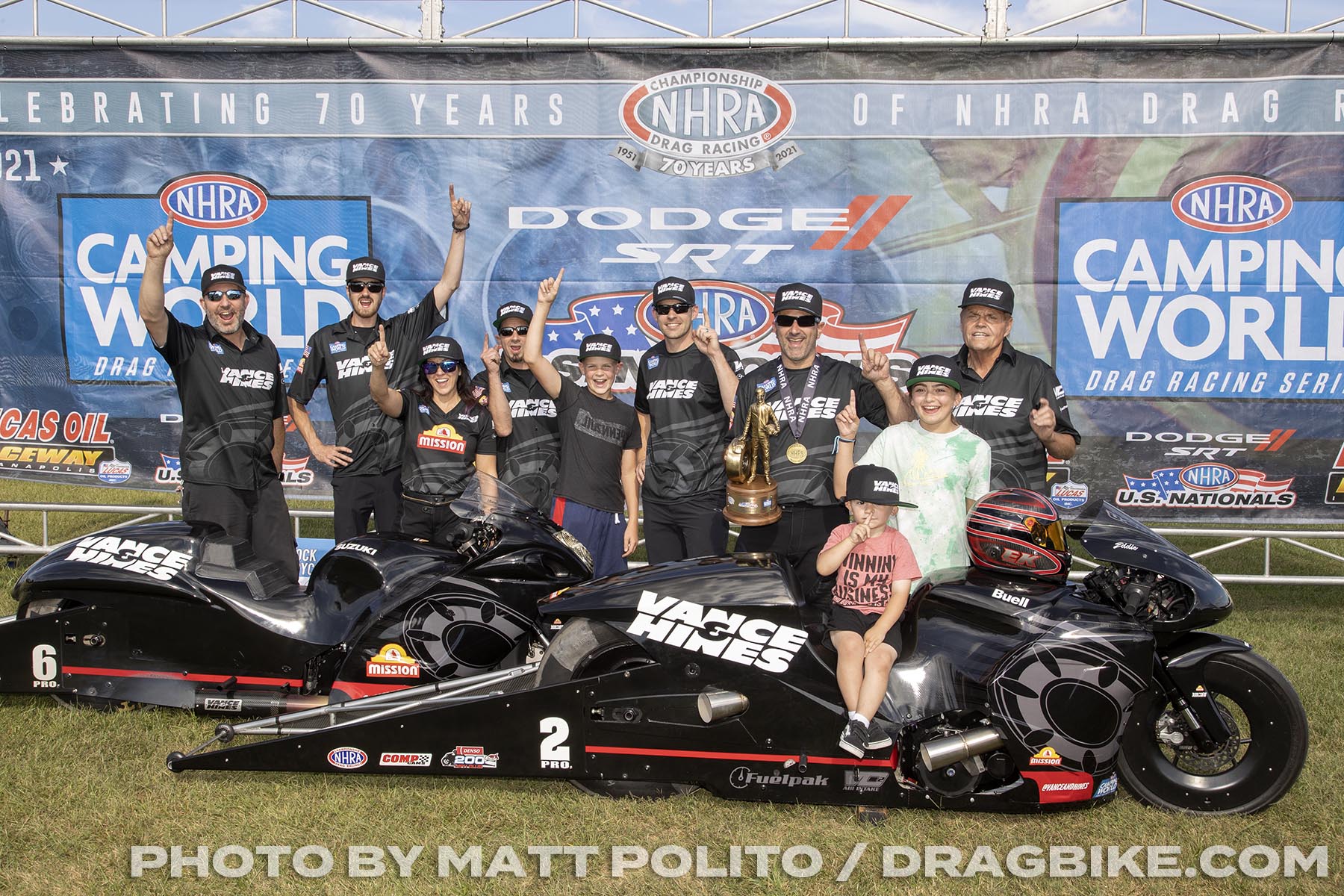 Heavy rain showers on Saturday wiped out the final two qualifying sessions of the 67th annual Dodge//SRT NHRA U.S. Nationals at Lucas Oil Raceway at Indianapolis. Fields for Sunday’s eliminations are set from Friday’s single qualifying session due to the inclement weather.

Looking to get his 2021 season going at the right time, Eddie Krawiec got off to a great start on Friday in Pro Stock Motorcycle, jumping to the top spot on his Vance & Hines Buell with a run of 6.826 at 199.40. If it holds, Krawiec would pick up his first No. 1 qualifier of the season and 49th in his career. Currently eighth in points and looking for his first win of the season before the Countdown to the Championship, Krawiec impressed on Friday with his standout run. Steve Johnson is currently qualified second with his run of 6.860 at 196.56 and Scotty Pollacheck, the defending U.S. Nationals winner, is third after going 6.866 at 197.74. Points leader Matt Smith went 6.892 at 200.17 to sit in the sixth spot.