On a record-setting day in Pro Stock Motorcycle, it was Scotty Pollacheck who claimed the No. 1 spot for the second straight race, going 6.736 at 201.16 on his Denso/Strutmaster/Matt Smith Racing EBR. It shattered the track record set less than 24 hours ago and gave Pollacheck, who also won in Atlanta, the sixth-quickest run in class history. He’ll face James Underdahl, Angie Smith and Karen Stoffer to open eliminations as Pollacheck looks to win a four-wide race for the first time in his career.

“The four-wide races are always tough, but I love racing in them and I would love to close the deal on Sunday,” Pollacheck said. “I’ve been close before, but I’ve never got that trophy at the end of the day. Hopefully, we can change that (on Sunday).” 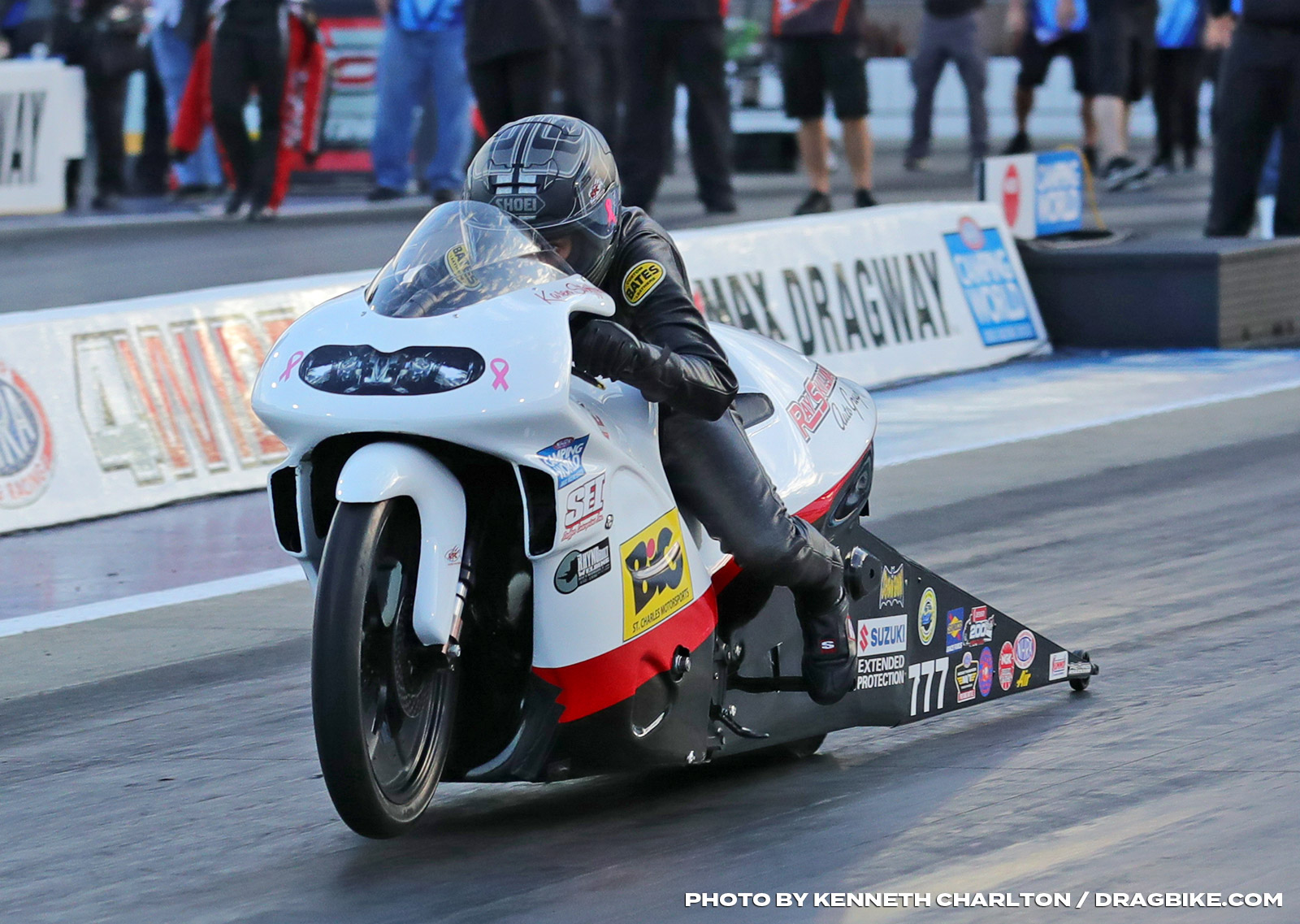 “The four-wide races are always tough, but I love racing in them and I would love to close the deal on Sunday,” Pollacheck said. “I’ve been close before, but I’ve never got that trophy at the end of the day. Hopefully we can change that (on Sunday).”

Eddie Krawiec finished with the fastest pass in Pro Stock Motorcycle history, a record that was re-set five times on Saturday. Krawiec did it in both of his runs, topping 203 mph on both occasions. He finished with a spectacular run of 6.771 at 203.49 to qualify sixth on his Vance & HInes/Mission Foods Buell, topping his previous run of 203.37.

Matt Smith, Hector Arana Jr. and Andrew Hines all posted career-best speeds of more than 202 mph, with each setting the speed record at one point on Saturday.

In all, the six fastest runs in class history came on Saturday, as well as seven of the top 10 and 10 of the 15 fastest runs.

Along with that, Steve Johnson qualified second with a 6.738 at 196.90, making the seventh-quickest pass in Pro Stock Motorcycle history and the quickest-ever run for a Suzuki. Smith’s 6.740 at 201.73 put him third and wrapped up a huge day for the defending champ. That run was the eighth-quickest ever, while his earlier pass of 202.18 momentarily set the record and now is the fourth-fastest in class history.

Hector Arana is fourth with a blast of 6.761 at 202.70 in the final qualifying session, giving him the third-fastest run ever for PSM. Joey Gladstone, who was Friday’s No. 1 qualifier, dropped him all the way to fifth in the midst of Saturday’s historic day with a 6.763. On a great note, Gladstone did make his first 200-mph run to become the final member of the Denso 200-mph club.

Joey Gladstone put on an impressive display in Pro Stock Motorcycle, he went a career-best 6.763 at 198.58 on his Precision Service Equipment Suzuki.