The Perth Motorplex wishes to advise that the drag racing event scheduled for this Saturday (8 January) has now been postponed to the 29th of January.

The House and Land Package Nitro Slam event has been rescheduled to allow sufficient time for competitors, spectators and other event participants to comply with the WA Government’s recently announced health measures (which require double vaccination for venue entry) to ensure maximum event success for racers and spectators alike.

There will be lots to see off the track as well – before racing begins, the pits will be the place to be with a special ‘Pit Party’ allowing fans to get up close and personal with all of the Nitro Cars and Doorslammers, with their drivers ready to meet the fans, pose for photos and sign autographs alongside the Sportsman racers at 4.00pm.

“The Perth Motorplex is committed to complying with the restrictions handed down by the WA Government on Monday afternoon which came into effect at 6.00am on Tuesday morning,” Evolve Facilities Management Commercial and Operations Manager, Paul Trengove, said.

“After consultation with our competitor group and other stakeholders, the decision has been made to postpone the event scheduled for this Saturday to January 29.

“While it was a difficult decision to postpone the event, this move will allow our stakeholders sufficient time to comply with the new WA health orders. This in turn will ensure that when it is held on January 29, the House and Land Package Nitro Slam event will be able to live up to its full potential and provide a fantastic show for spectators.

“We would like to take this opportunity to thank all of our supporters including our fans, racers, sponsors, staff, volunteers and contractors for their patience and support as we navigate what has been a rapidly evolving situation.

“We look forward to putting on the best show that we can on January 29, and to a great season of racing ahead.”

Existing spectator ticket holders will soon receive transferred tickets to the new date on January 29. If you cannot attend, please email ticketing@motorplex.com.au . Competitors will have their entries and tickets transferred automatically to January 29 and those who withdrew early can re-enter via the competitor system.

The Perth Motorplex wishes to highlight to its stakeholders that new mandatory health measures have been put in place by the WA Government which affect all Perth Motorplex events.

In the afternoon of Monday 3 January, the WA Government announced new restrictions effective as of 6.00am this morning (Tuesday 4 January), which directly affect all attendees and participants at the Perth Motorplex.

Effective immediately, the Perth Motorplex will be complying with the following WA Government mandates:

“The Perth Motorplex team is now responsible for checking the COVID-19 vaccination status of all patrons aged 16 years and over as a condition of entry,” Evolve Facilities Management Commercial and Operations Manager, Paul Trengove, said.

“The WA Government is developing a mobile app that is safe, secure and convenient which is expected to be available in the next several weeks. In the meantime, you must show either proof of vaccination or proof of medical exemption when seeking entry to the venue. If you have a medical exemption, your doctor will update your record on the Australian Immunisation Register.

“To ensure the entry process is as smooth as possible for all involved, we ask attendees to please have their proof of vaccination or medical exemption ready to show prior to lining up at the gate. We thank you for your patience and support as we seek to comply with the WA Government required health measures while continuing to host successful events for all involved.”

Acceptable forms of proof of vaccination or medical exemption include:

Patrons wishing to enquire about refunds or transfer of tickets, or seeking additional information, should contact admin@motorplex.com.au

Nitro Nitro and more NITRO + the baddest Doorslammers in the country!!!
Be ready to have your Nitro fix as the BME/Speedtorque WA Nitro Max Series takes over the Perth Motorplex when Nitro Funny Cars, Dragsters and Altereds hit the track including Andrew Katavatis in Beach Bomb, Matt Abel from Darwin in Nitro Thunder, Anthony Begley in Chucky’s Toy, Michael Brooks in Nitro Mayhem and more in a head to head Nitro Fueled Frenzy! 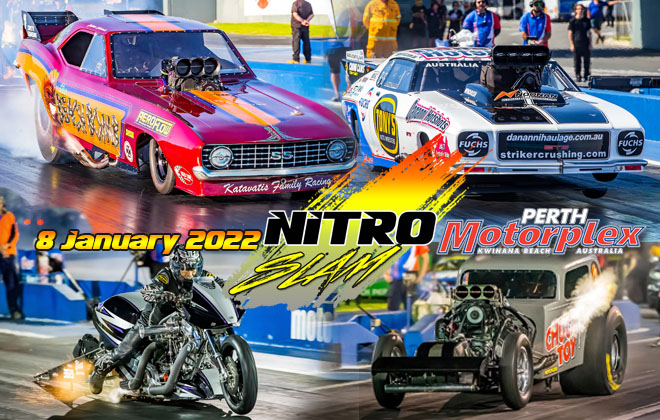 Be early and be a part of the ‘PIT PARTY’ at 4:00pm with all the Nitro Cars, Doorslammers and their Drivers out in the open ready for in car pics and poster signing! Get up close and personal with all the Teams plus other Sportsman racers!

Of course on top of all the Nitro action the two wheel warriors in Dragon Bikes Nitro Bike will be on hand as well as your usual Supercharged favourites with the Top Doorslammers in the Direct Mining International Summer Slam Series, plus Supercharged Alcohol Dragsters, Funny Cars and Altereds in Top Comp along with 150 of WA’s toughest Sportsman racers ensuring a evening of non-stop entertainment.