This year’s Sportsman Motorcycle Bracket Shootout at The Strip at Las Vegas Motor Speedway was held on February 26, 2022. Kahea Wood does a great job of getting it put all together with promotion, sponsorship and overall just putting together a good time for everyone.

The weather was a bit chilly for the locals but really nice for those getting out of the snow. High 50’s with a 5-15mph wind. We had 49 bikes/sleds make the race. There were competitors from nine states with Jason Clampitt winning the “longest tow” award travelling from Minnesota. He received $100 from Specialized Chimney Repair. Unofficially, a few of the other racers chipped in as well.

There were two qualifying rounds before eliminations to set the ladder. Based on reaction time and utilizing both the full and pro tree split in eliminations but done in separate groups in qualifying. Gary Stoffer, Gardenville, NV and Rick Newport, Bluffdale, UT both had .001 reaction times in qualifying but Stoffer got it first round. He gets the #1 qualifier prize of a Head Porting job from Performance Cycle. Chris Ragan gets $100 from Worldwide Bearings for being #7. Larry Mota, Orem, UT was the #19 qualifier and gets $100 from Robinson Industries. I am not supposed to say who the last qualifier was but he is from Northern California has an orange drag bike and his name rhymes with Cycle O’Peel gets $100 from Barrera Motor Works.

Special awards for the first round included the “First Bag of Doughnuts” to the first racer with a perfect reaction time in eliminations. Roy Barrera, Jr. picked up a $100 from Clayton Howey for his perfect light. Then later in the first round, Tom Medlin did it too! Gary Stoffer of SEI also gave him $100 bonus. Both also picked up $100 each from Liguori Drag Racing for the best first-round light.

Roy Barrera, Sr had the best-losing package and gets $100 from Web Camshafts.
Dominic Davis gets $100 from APE for the worst reaction time of the round.
Ken Giles gets the closest losing margin of victory and $100 from May Enterprises.
Gary Oaks got $100 from Barrera Motor Works. The prize was supposed to be for the first .022 reaction time but since nobody got it they went with Oaks’ .122 in the first round. It was in honor of the 22 veterans that take their life every day. Thanks to Roy for the prize and mostly the reminder.

Kirk Walton got $100 from SEI for the “worst knuckle-headed loss”, so a personal thanks to Gary and Karen Stoffer for that!

In the second round, it seemed like it was a local pair racing each other each race.

Paul Silvas on his Ducati won when David Trost fouled out.

Jeff Durfey on the ’80 Kawasaki took out Tracy Giles on the ’15 Kawasaki when Giles couldn’t get close to his number. Both riders coasted through the line slowly.

Anthony Vanetti had the bye run and just coasted through the line.

David Phillips had the best reaction time of the round (.009) and gets $100 from Robinson Industries. Tom Medlin gets $10 from Go Fast Bike Parts for the best losing package.

Thankfully the next two rounds didn’t have a red light determine a race. After the race, the LVMS crew checked the rollout since there was a bunch of redlights in the left lane in all classes. It seemed a bracket came loose and put it off just that much. LVMS was very apologetic about the problem during the race. It took a few hours of fixing overnight to get it corrected. I know it sucks for those affected but at least the track took responsibility and fixed it for the next racing Sunday morning.

Jeff Durfey got both $100 prizes from Worldwide Bearings for best reaction time of the round (.003) and $100 from Web Camshafts for best losing package.

Congratulations to Rick Newport for the win! He also gets an NHRA “Wally” since it was the yearly race for the local racers. 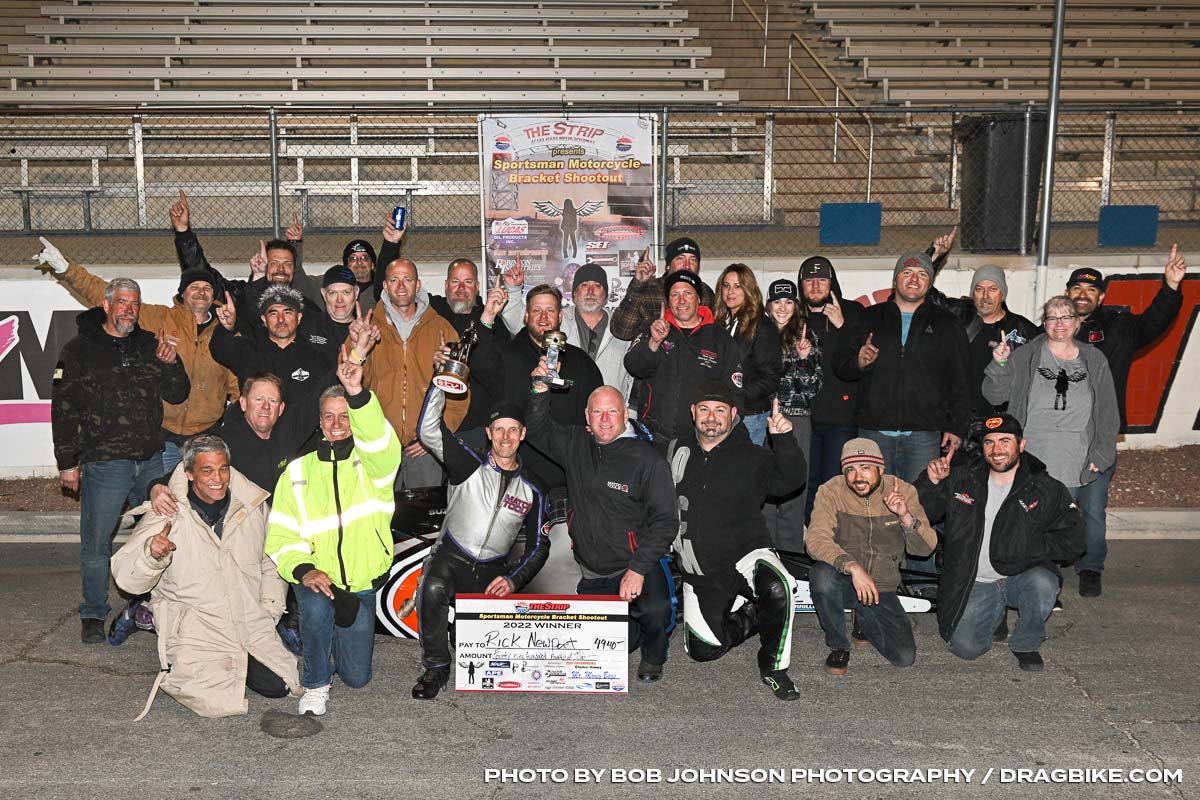 There were also product giveaways from Lucas Oil, cash giveaways in the raffle from Liguori Drag Racing, SEI, and Road Kill Grill provided free BBQ all day long for everyone.

Thanks again for Kahea Woods for setting up this race! Thanks for all the staff and crew at The Strip at Las Vegas Motor Speedway with Jeff Foster heading up the great group. Thanks for all the sponsors whose support means more than the prizes you gave out. Thanks to Bob Johnson Photography for the photo coverage, pictures are available on his website at https://bobjohnson.zenfolio.com/p50039952.

And most of all thanks to all the racers and crews for making the trip and making the race a lot of fun!