HomeTeam Reports3 and the Win for McKinney in Dallas

3 and the Win for McKinney in Dallas

“Man, I really want our bike to run a 3,” Scott McKinney said last week. His McKinney Motorsports team was on their way to the Texas Motorplex near Dallas for the Professional Drag Racers Association (PDRA) season opener.

There hadn’t been a 3 second Pro Extreme Motorcycle eighth mile pass at a PDRA race ever, and its predecessor ADRL had seen only one 3 second racer—Ashley Owens. But that was before a minimum weight rule of 625 pounds for bike and rider was set up, and Owens’ combination when he rode Paul Gast’s 3 second Fast By Gast “Red Bike” was 600 pounds. Two PXM combinations have run 3s at the Bahrain International Circuit, but there is no weight rule at Bahrain.

Now Owens rides and tunes for McKinney, and both he and teammate Eric McKinney have posted many 4.0s on the board and ran a 4.02 testing in Georgia. “But Ashley went 4.02 about 50 times before he ran a 3 on the Red Bike,” said Scott.

Owens had a more compressed time frame in mind this time around. “I did a little work over the winter and got a new package worked out,” said Owens. “We got a little weight off the bike, about 10 pounds.”

The team also took out their favored motor known as Mr. Mud and put an as-yet un-named bullet in Eric’s frame rails. Mr. Mud is so named because it was in the Red Bike when Ashley crashed it years ago in Huntsville—its intake ports packed with Alabama clay after the carbs were knocked off and the bike dug in at the end of the track. “Mr. Mud was one of the motors I ran 3s on back then,” said Owens. “It was always my favorite motor and we’ve used it in Eric’s bike as often as possible.”

“But we had this other motor that laid around up in the trailer all last season,” said Eric. “Dad said ‘Let’s give it a try’ and it ran 4.02 right off the trailer in Georgia.”

“That motor has a really good cylinder head from Paul Gast,” said Scott. “I was told when I bought that head it’s a good one, and it is. It’s a real good engine.”

But there were more changes to be made for this champion team that never lets up. “I don’t usually get to see Eric’s bike run except from the waterbox,” said Owens, who rides a similar bike to Eric’s and finished number two in points last year.  “I mostly just tune from the downloads. But at Valdosta I got to watch the bike make a pass or two. We lowered the wheelie bars and did a couple other things.”

Steady rains had thrown a real monkey wrench into the Texas event, and it was late in the day on Saturday before the team had their first chance to make a pass—a number one qualifying 4.008 from Eric that sent notice of what was about to happen. “We weren’t really trying to do that (run that quickly),” Eric said Saturday night. “It’s still a long way to a 3, but Ashley is onto something. We’ll see how tomorrow goes.”

Sunday started late after more dampness and track drying, but PDRA’s Cale and Cody Crispe—AKA The Traction Twins—put the PJ1 traction compound to good use. The skies were clearing and the air was getting better. “Ashley had my bike souped up,” said Eric. “He knew it was either gonna hurt itself or go very quick. So we decided to sit the second qualifier out.”

“The bike always ran the back half, had the power to run the number,” said Owens, who’s been working on the 60 foot times with the heavier combinations and thought he had it figured out to run a 3.

“I didn’t think we would do it right then,” continued Scott. “But Ashley was pretty confident. He said ‘I think we’ve got it.’”

So the McKinney team rolled up for round 1 of eliminations. “The track was really tight,” said Scott. “Ashley had the tune-up in Eric’s bike and it ran the number. The stars lined up and I was shocked.” Four years later and 25 pounds added since Owens was the first person ever to run an eighth mile in less than 4 seconds on two wheels burning anything other than nitromethane, Eric McKinney had a 3 second timeslip—3.998 at 179.54 mph—both PDRA records.

“You’ve gotta have the horsepower,” said Scott. “I don’t know that we could have run that 3 with any other engine in our trailer. 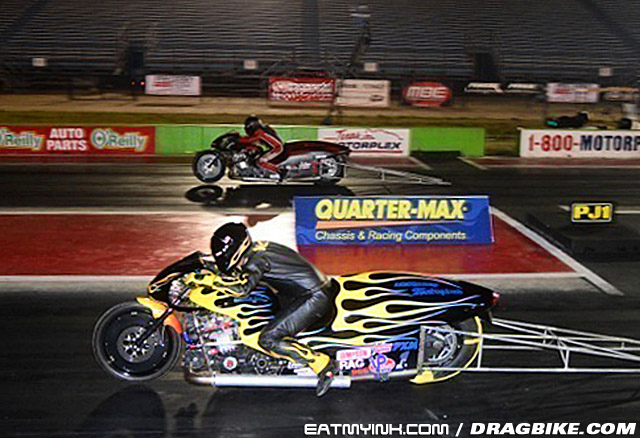 “Eric did an excellent job and was on his game all weekend. I know he’s my son and all, but if he was150 pounds or less like some of these guys out here, he’d be deadly.” Hmmm…..make that MORE deadly than the PDRA’s first ever PXM champion—and now their first ever 3 second motorcycle pilot—already is.

“We had a real good track there too, so that helped us,” noted Owens.

The 3 second pass behind them, the team still had an event to win. Eric slowed to a 4.02 in his round 2 win over Jeff House, still good enough for lane choice over teammate Owens in the final.

“Run ‘em, put ‘em on kill!” Scott pleaded, eschewing team orders. And they did. Darkness now descended on the Motorplex, you could sense that one of Team McKinney’s motors wouldn’t survive the round. “The track had gotten a little gummy,” noted Scott.

“Dad searched for a good spot to line me up and kind of had me in the middle of the track,” said Eric. “Then I ran over and had Ashley pointed towards the wall,” laughed Scott.

The rollout at the Motorplex being a little long, neither rider had a good light in the final but Owens had a slight edge. “My bike left good but spun in second gear, fishtailed and started driving left to the wall,” said Eric.

By this time Owens was already out of the throttle, his motor expired in a flameless cloud of smoke. “My bike burnt a piston,” was Ashley’s assessment.

“He was on a pass,” noted Owens. “It would have been a great run if he didn’t have to let out of it.”

“Eric did everything but hit the wall and Ashley blew up,” laughed Scott. “But we were number one qualifier, set both ends of the record, and won the race—you can’t do any more, can you?”

“And it didn’t hurt anything,” Eric said in near disbelief. “We finished the race with the motor, now we’ll freshen it up for Rockingham.” 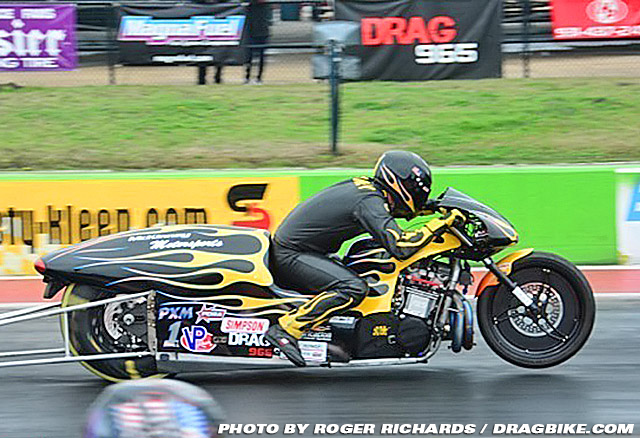 “I just hope we don’t run everybody off,” said Scott. “We need more competition out here, and there’s plenty of bikes that can run with us. Brad McCoy ran a 4.16 and Jeff House ran a .13 here. I think there’s a lot of bikes out there with .0s in them.”

Now the team prepares for what should be a much larger, tougher field at Rockingham on April 9-12. “I’ll pop the engines out of ‘em when I get home,” said Scott. “Ashley told me if I take that 3 second motor apart to make damn sure I mark everything so it can go back together exactly how it is!”

One component of the motors that the team expects to find ship-shape are their Vance & Hines crankshafts. “We’ve had no failures on the cranks since switching to the Vance & Hines,” reports Owens.

“I really want to thank Eddie Krawiec and everyone at Vance & Hines,” agreed Scott. “Not just for supporting the class with their qualifying bonus, but also for building a crankshaft that can stand the pressure we put them under.”

“Oh yeah, I really want to thank Drag965 for stepping up and sponsoring the class,” agreed Scott. “They didn’t have to do that, and it’s huge for us. I also want to thank my brother Steve. His help on the clutch and everything else he does is huge for our team.” 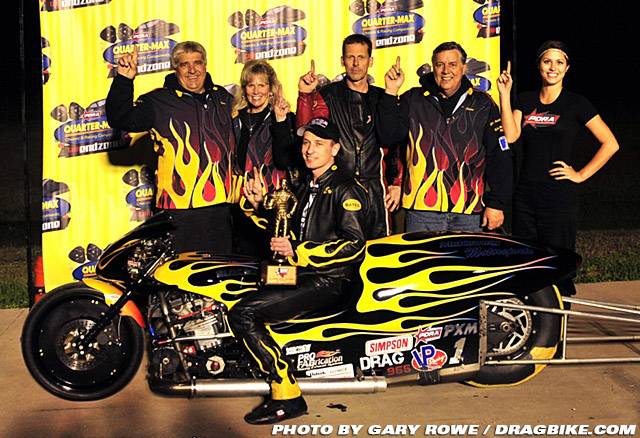 “And thanks to Simpson helmets,” said Eric. “They’re helping us out a bit this year, giving us a deal.”

So what goals do the McKinney Motorsports team have for the rest of the year? “Well, I planned on building Eric a new bike, but I’m behind on that and now I don’t think I’ll ever get him off of this one,” laughed Owens.

“I’d like to run a side-by-side 3 with Ashley before the year is out,” said Eric. No one in the field is laughing about that possibility.

The McKinney Motorsports team races next at the PDRA’s Spring Nationals April 9-12 at Rockingham Dragway in Rockingham, North Carolina.