NASA’s Space Shuttle program may be winding down, but Bill Warner continues to reach for the stars. On Sunday, at Loring Air Force Base, in Limestone, Maine, he became the first man to exceed 300 mph riding a sit-on motorcycle, with a stunning 311.94 mph run on the 1.5-mile course. 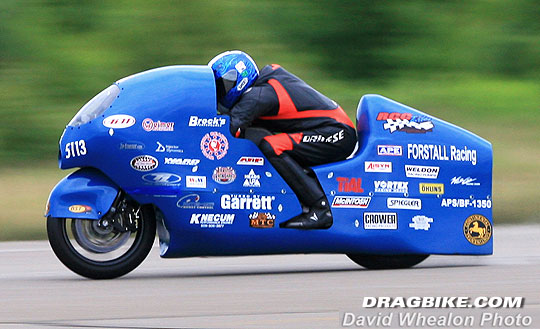 Brock’s Performance President Brock Davidson, a license-holding 200+ mph land-speed-racing participant, is ecstatic with this achievement: “We wanted to make sure that we had enough strength to deal with the potential power output and centrifugal forces developed at these ridiculous speeds. Thanks to Bill’s testing, BST’s ILR wheels are now available for race and street use to consumers.” 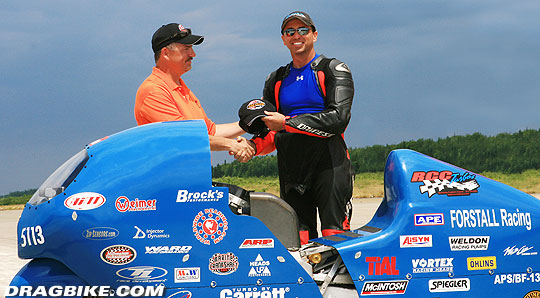 Warner, a veteran land-speed competitor, nonchalantly said that accelerating up the runway at up to 152 yards per second wasn’t very dramatic. “In this situation it was very calm. I progressed my speeds up from 180 mph over the past few years, so it was not a traumatic thing to do.

“The big part of it,” he continued, “after the speed happens, is trying to stop the bike. At Loring, there is a mile shutdown to slow the vehicles and I used every bit of it. The bike was bouncing, hopping, skipping and sliding. Needless to say, I got it stopped safely. It was a little scary.” 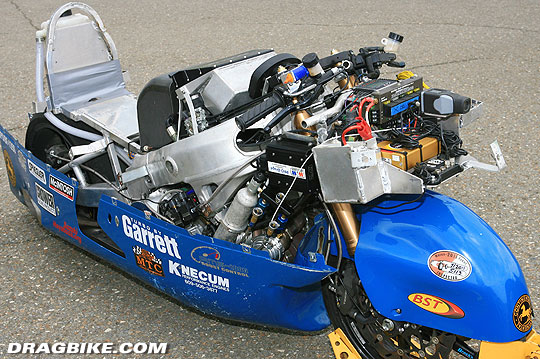 Not only did Warner blow away his former top-speed record from Texas last year by 33.3 mph, but he also blew the minds of the land-speed-racing community.

Joe Timney, President of the East Coast Timing Association, said: “We knew he had big speeds in store for Loring, but for god’s sake, he didn’t just clip 300 miles per hour, he buried it! This is a world record of epic proportion. Bill went faster on a sit-on motorcycle than Don Vesco did when he broke 300 in a streamliner; the hair stands up on my arms just thinking about it.” 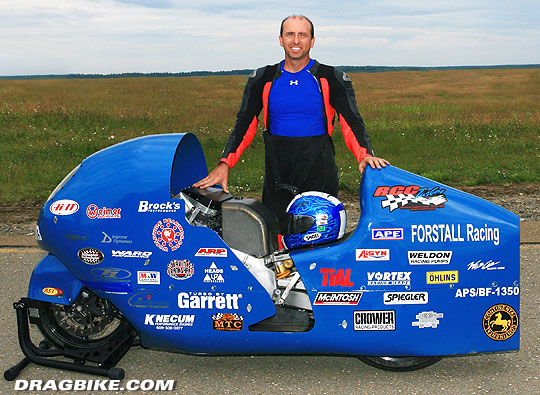 Bill Warner and his
record-setting motorcycle

Here’s what Dean Sabatinelli, who holds a class record at 269.7 mph, had to say: “I don’t see anyone getting close to this record in the next five years, even if they started right now and focused intently on the task. Bill approaches land speed racing like a scientist. There really are no words to describe his determination.”

Scott Guthrie, a fellow racer and team owner who has ridden to more than 200 land-speed records, said, “When Don Vesco set the record in 1975, he had a full-on factory effort, with everything paid for,multiple factory engines and plenty of world-record experience. Bill is a privateer in the truest senseof the word, building his bikes at homewith help from friends and associates. While Bill is always short on cash,he is very long on brains, will power and the desire to be the best in the world.”

A list of specifications follows. For more information on BST wheels, Brock’s Performance products and other sportbike performance parts, go to BrocksPerformance.com .

About Brock’s Performance: Brock’s Performance leads the way in sportbike innovation for acceleration addicts. From exhaust systems to wheels, this championship-winning company designs, builds and sells more than 3000 products that make it easier and safer for racers and street riders to reach record-breaking results through a never-ending process of research, development and track testing. For more information about BST wheels and other Brock’s Performance parts, go to BrocksPerformance.com