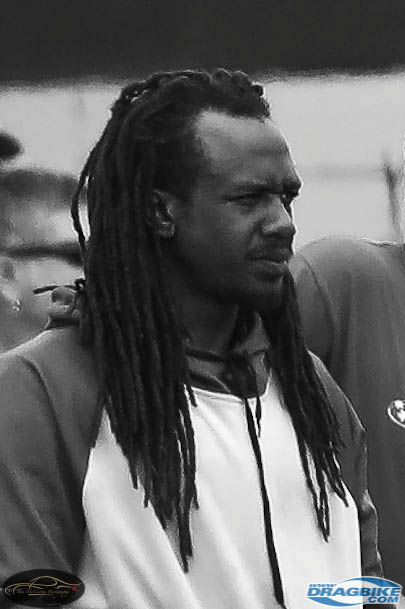 On a chilly morning at the 2021 Man Cup Exoticycle Nationals, I caught up with rising star professional drag racer Chris Garner-Jones for an interview on behalf of Dragbike.com. Busy as the man is, it was difficult to find time during a race weekend to sit down with Chris, as he’s a man in motion with places to go, planes to catch, and things to do, and none of that involves sitting around engaging in idle chatter. But as he said he would, he made time for this reporter to answer whatever questions I had that Dragbike.com readers might find of interest.

Chris was busy changing a tire on a big Pro Extreme bike when I showed up to interview him and it was bad timing on my part. Whenever a drag bike is apart, it’s time to step back and let the racers do what racers do. Because in the pits and on track: racing comes first – that’s what we came there for. Interviews and comments are for later or at best, between rounds. Racing always comes first, we are racers and that’s what we do, we live to go racing. So after waiting around a bit, I departed and knew I’d return when the time was right. 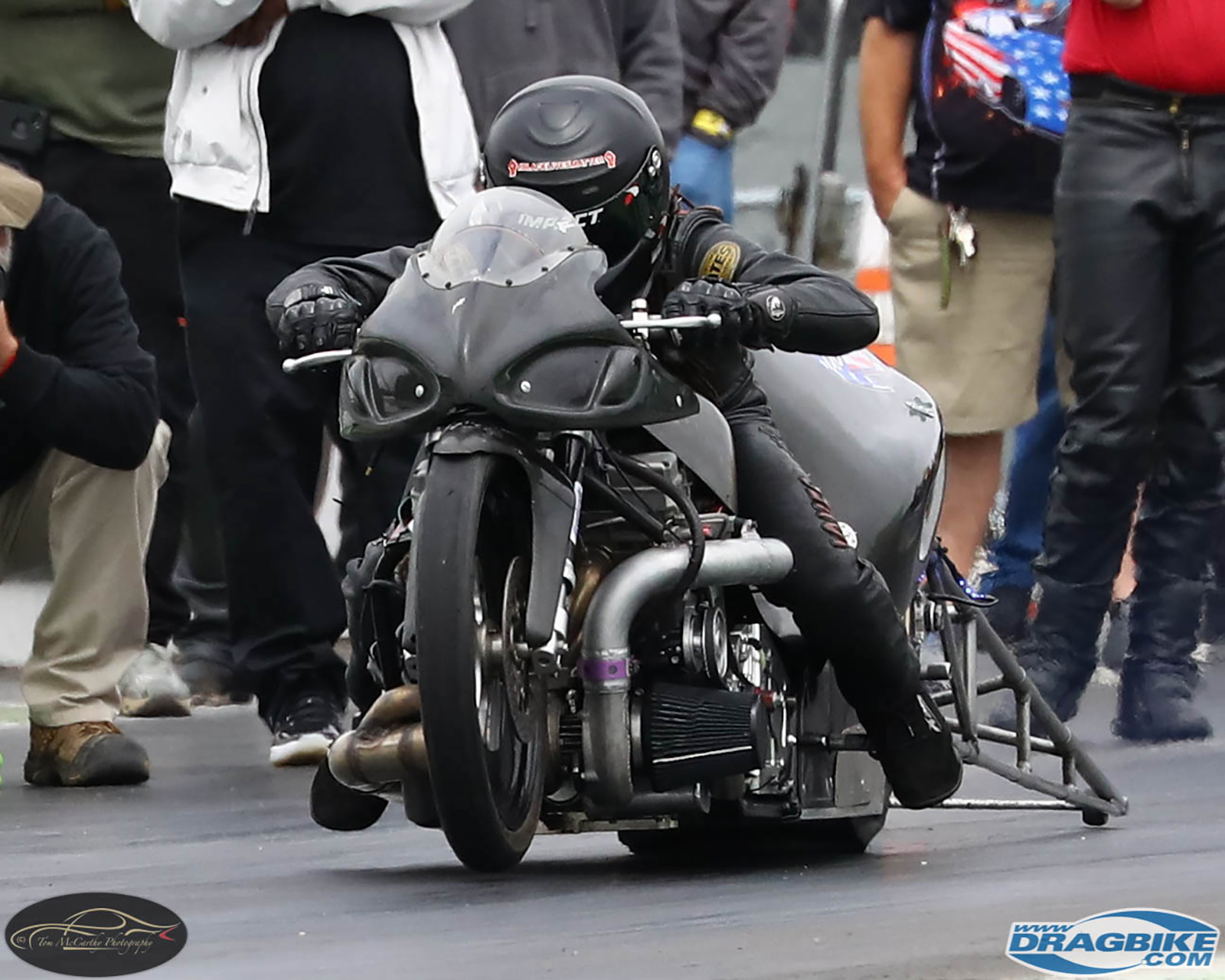 About an hour or so later, I got a text from Chris letting me know he had some time. I responded with “be right there,” saved my work, then headed from the tower to the pits. When I arrived outside the Dan Wagner Racing trailer – where the Warp Speed Racing GSX 1400cc Pro Extreme bike was sitting, quietly awaiting its turn to go dominate the Man Cup, Pro Open class – hired gun dragbike pilot Chris Garner-Jones was there waiting for me, bundled up in his hoodie, waiting for the Florida sunshine to warm things up. 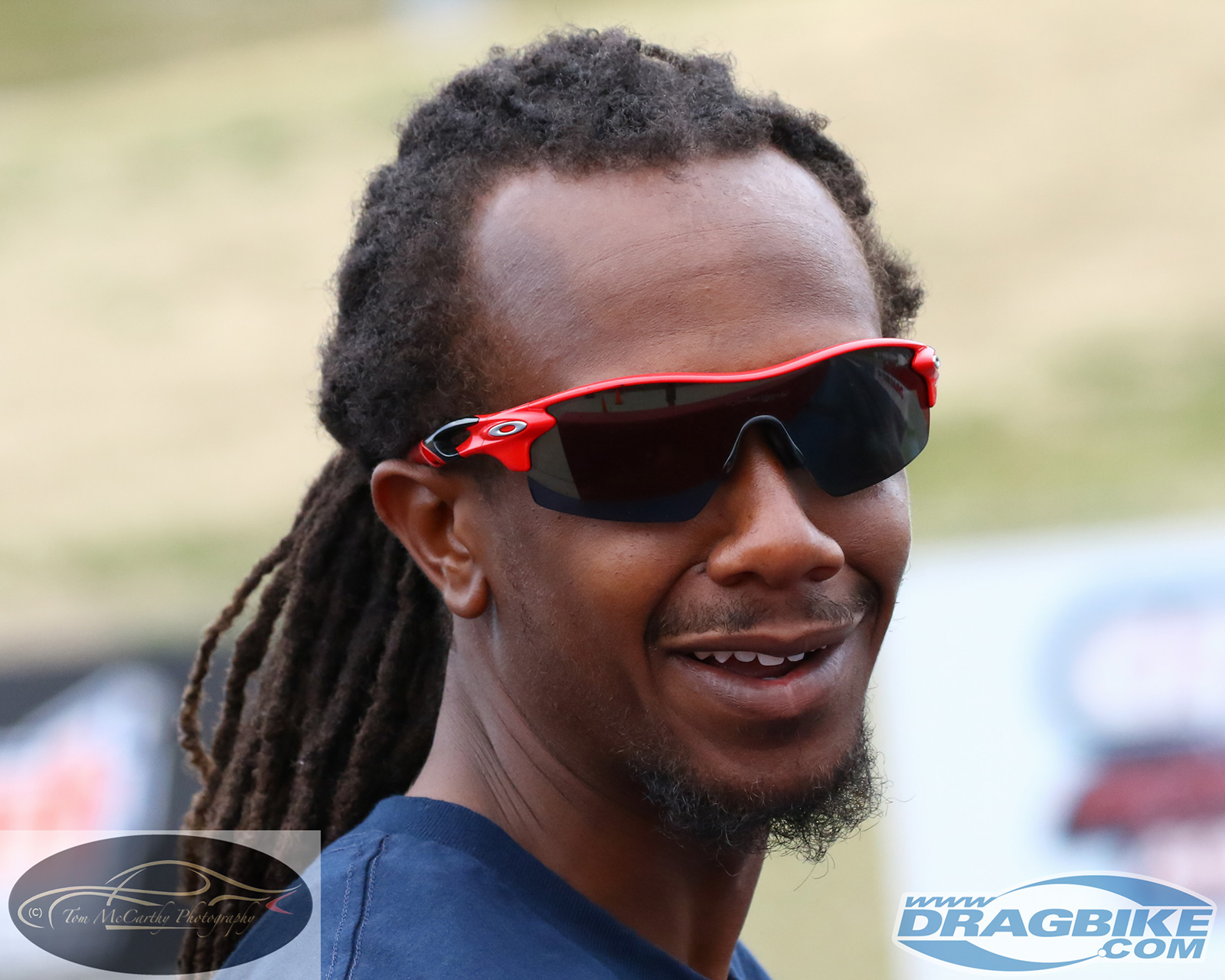 CGJ as I often refer to him first caught my eye about three seasons ago when I noticed him consistently running 4.0’s in Man Cup Pro Mod competition out of the Jones Racing stable. Of all the Jones bikes present, Chris was constantly churning out 4.0 passes like a Pro ET racer. Every pass, didn’t make a difference if it was a test shot, a qualifying run or an elimination effort: every pass Chris made, he chopped the tree and ran the bike to its tuned potential, 4.0-whatever. So as the announcer for Man Cup, I began referring to him as 4.0 Jones. It was obvious, this man can DRIVE a high horsepower drag bike! No dancing around out there, no sudden shifts L or R, just right down Broadway, like a Pro Stock Bike pilot. 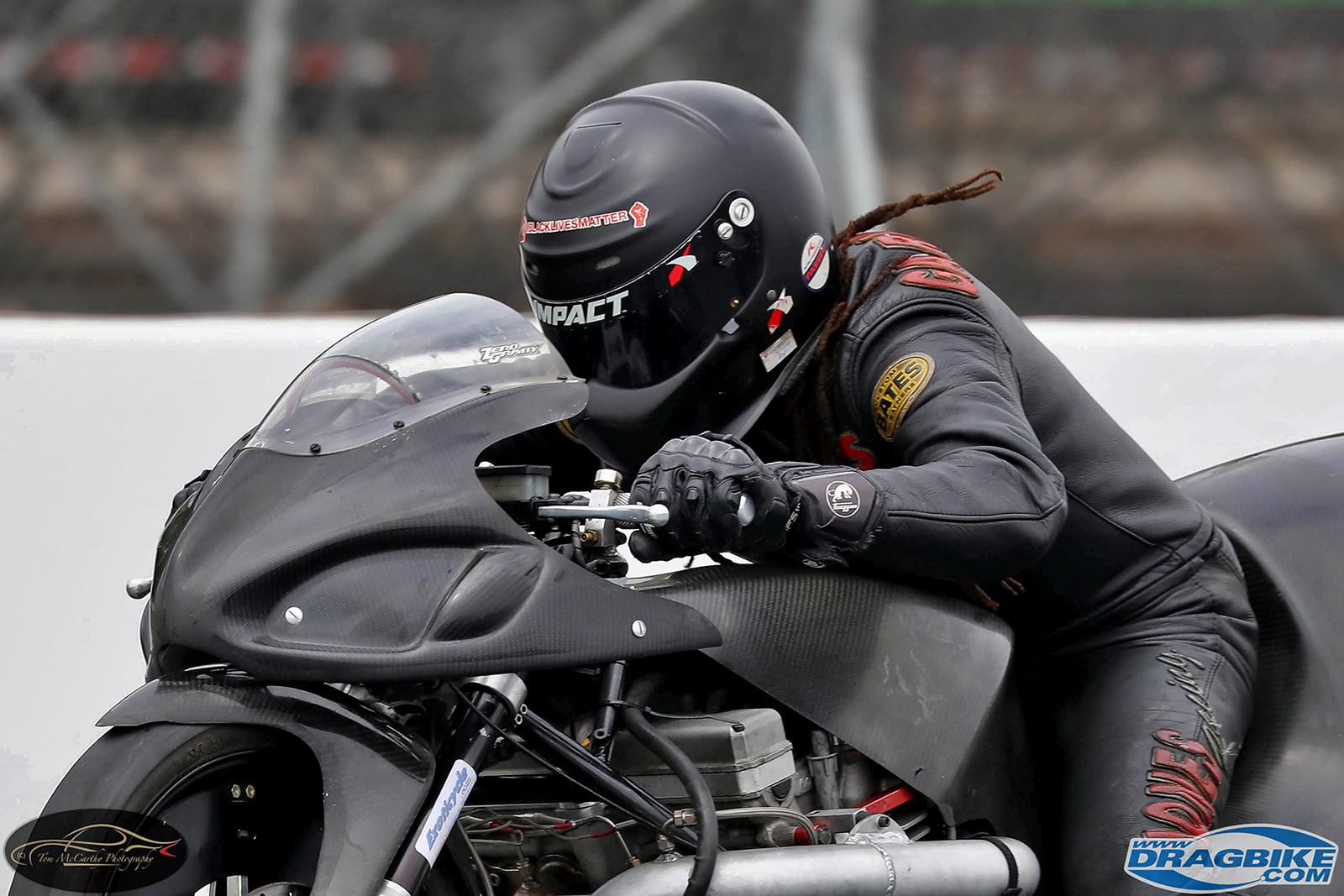 I found out later during my interview, exactly why that’s his style.

31-Year-old Chris Garner-Jones is the chief starter on staff with Huntsville Dragway, in Harvest, Alabama. Chris runs the starting line and is also a utility man at the track, doing what needs to get done to keep the facility and racing events running smoothly. But beyond that, who is Chris Garner-Jones?

“I am the son of TT Jones a man who had a passion for life and of Angie Jones, they raised me right. And I love racing.” Chris is single, has a 3-year-old daughter he adores, she is the center of his universe.

“I started drag racing for real, about 7 years ago, 2012-ish, but I’ve been involved in drag racing on many levels, all my life.”

Chris laid it out like this in speaking about his time in drag racing, “My dad was an outstanding drag bike pilot, so I’ve been in and around the sport since I was born. I have a lot of my dad in me. I was riding four-wheelers long before I got on two wheels. Back when I was younger, I raced my kiddie-type cars (battery-type) and things like that around the yard. When I was five or six, that’s about when I really started to take an interest in motorcycle drag racing.” So this has been in his blood from his earliest years. 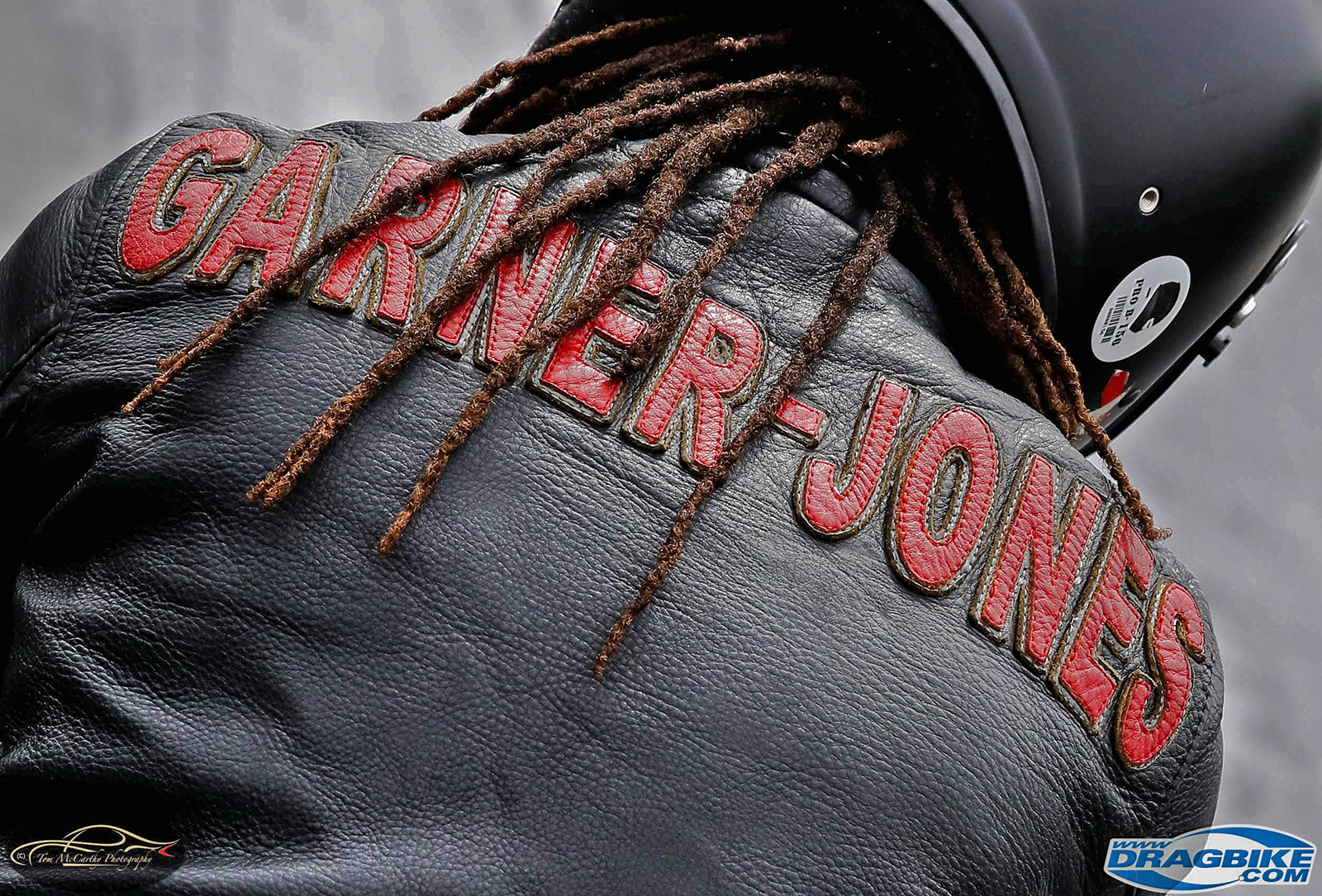 From watching his dad and his dad’s friends racing, he came to form an interest in watching NHRA drag racing, and of course, he knew who the best of the best were during his formative years. “The racers I looked up to from my youth were guys like Antron Brown and John Myers in NHRA Pro Stock. They were two of the best from that era. Later, as I got older, Eric McKinney and Ashley Owens; man they caught my attention. Guys like them, Bill Vose and of course, my dad, TT Jones, they are all giants in my eyes.”

Chris Garner-Jones is a very talented drag bike pilot who could really drive the heck out of anything he chose to throw a leg over, so why race in Pro Xtreme Motorcycle or Pro Mod? “Like my father before me, I’ve always had a thing for the big bar-bikes. Pro Mods, Funny Bikes, Pro Stock motorcycles; the big powerful wheelie bar bikes were my thing. So I gravitated to that from the start. I have all the respect in the world for the fuel bikes, like Top Fuel – but it seems to me, that’s for big guys. Larry McBride 6’4”, Sam Wills, you know, big guys, that’s not for me.” 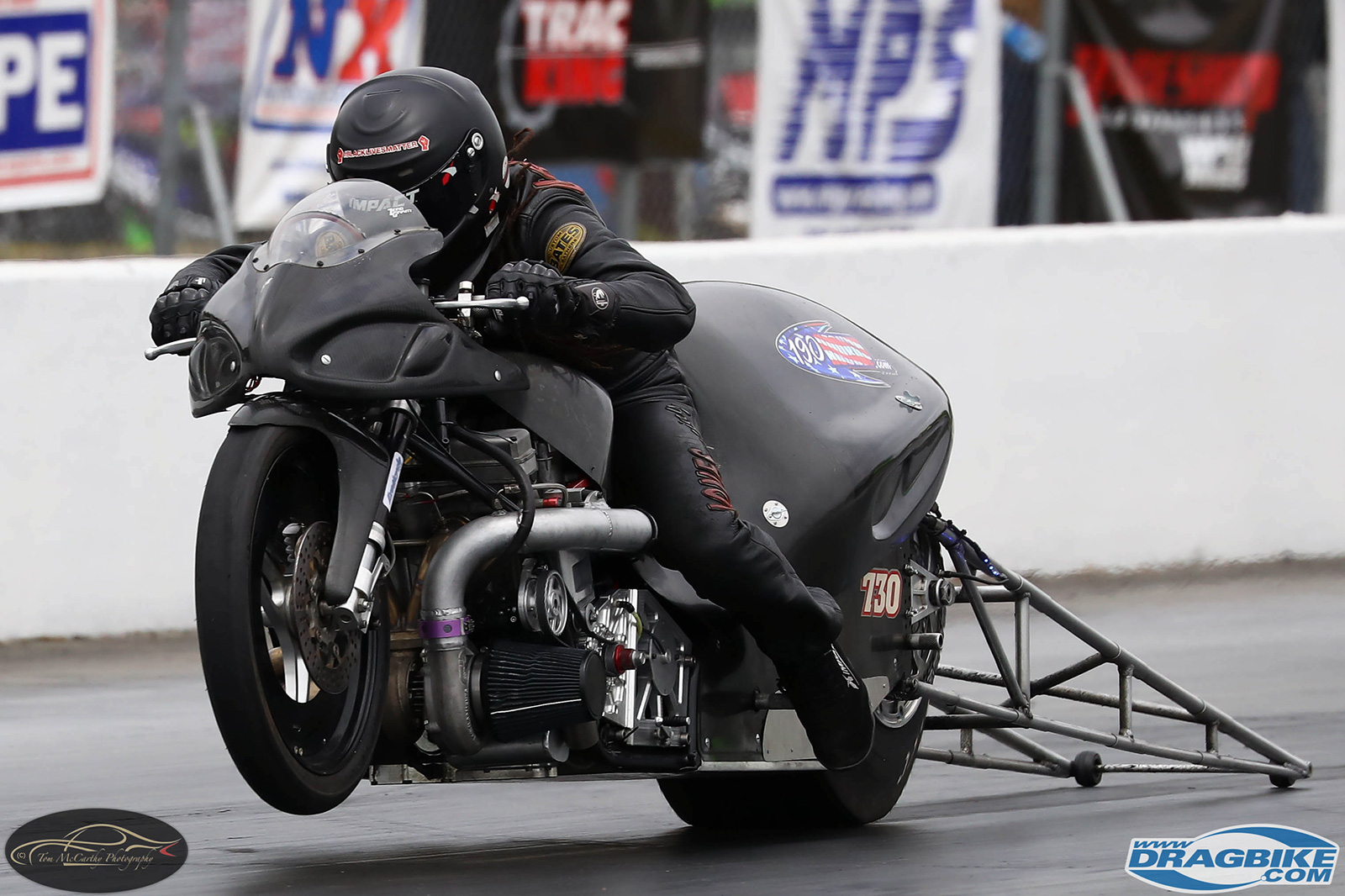 Chris could race any series he wants to and when asked which he preferred this is what he had to say: “I like the PDRA, Man Cup, Qatar Racing League, they are all good. I love Man Cup, but PDRA, I get to watch the big cars run between rounds and it’s just a different show with a different feel. But I like ’em all.” 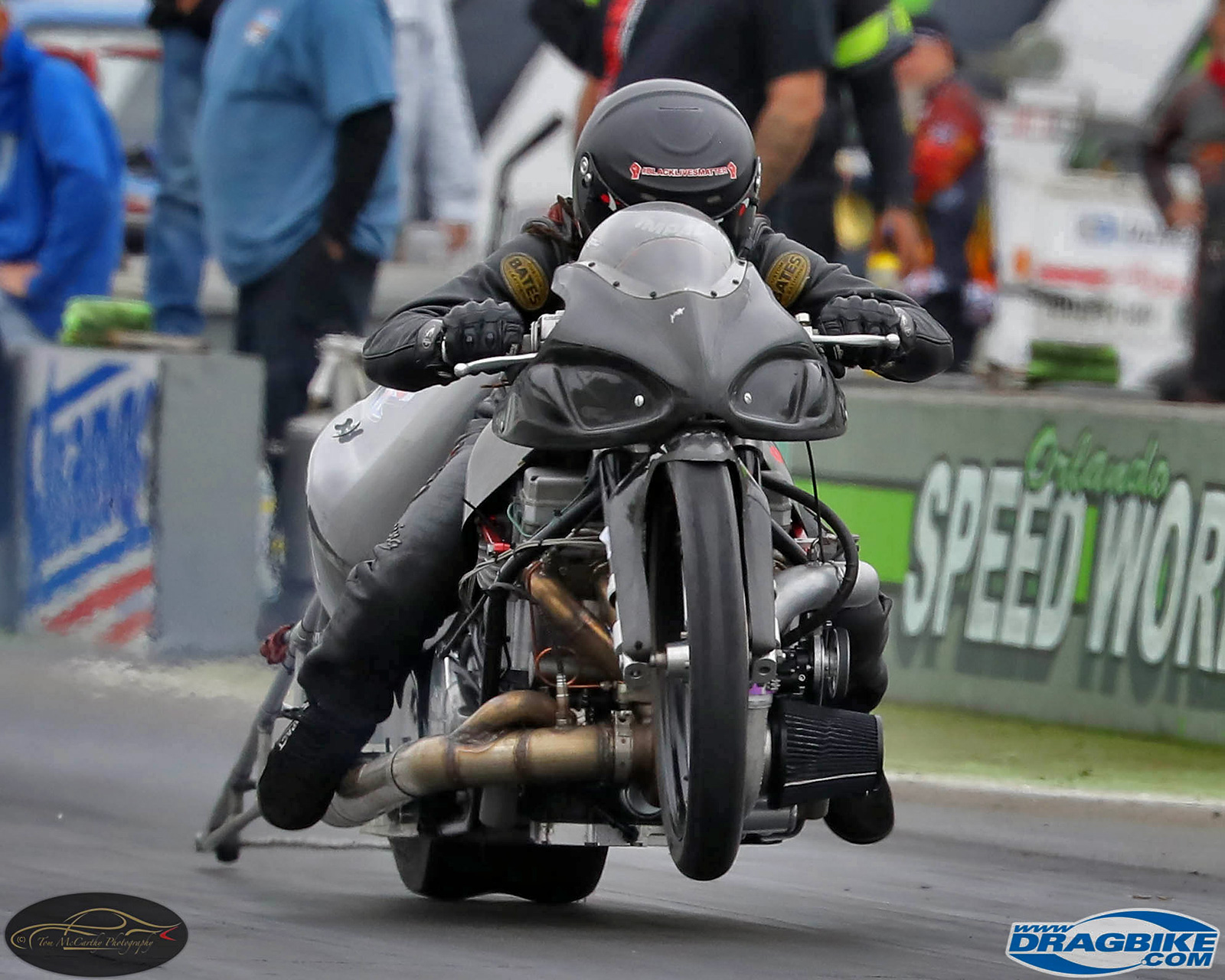 Chris is a very talented drag bike racer and he is his father’s son.

Who was TT Jones?

Chris Garner-Jones had this to say about his dad “TT Jones was as passionate and loving as they come. Very understanding and by far the best dad in the world. He always smiled and would help anybody that was in need. He was dedicated and committed to the things he loved! When it came to racing he was one of the biggest guys out there, also one of the best. He’s definitely a legend in this sport in my eyes! Without him, I wouldn’t be where or who I am today! 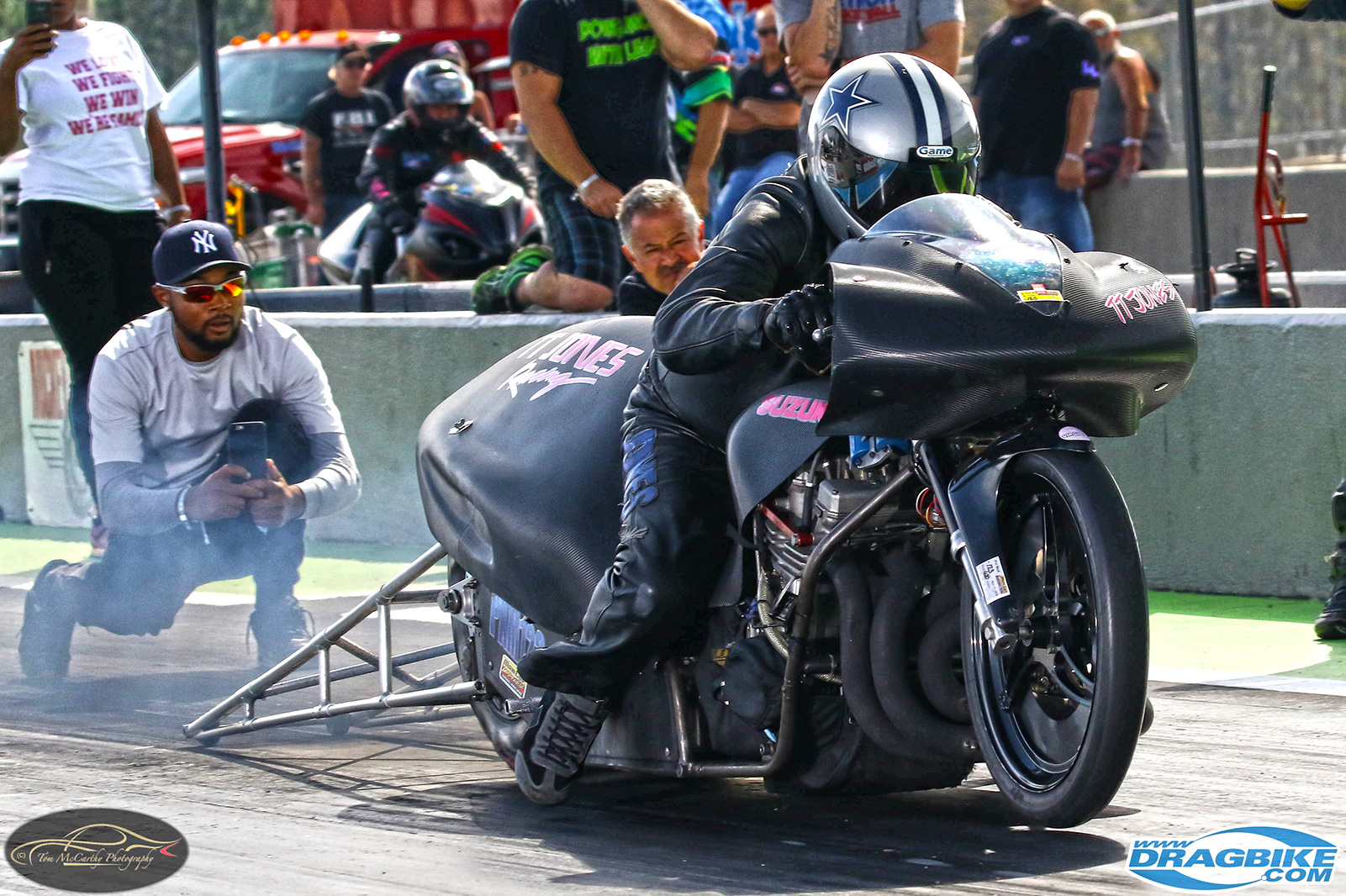 Chris would like to give a big thank you: to God, my parents TT and Angie Jones. My Tuner Big William Garner. Dan Wagner, Ashley Owens, Richard Gadson, Muhammad, and Bader Alawaad. Paul at FBG. Tommy and Judy Franklin from PDRA, Man Cup, and the entire organization. The XDA and its entire organization, Bay Bay Yarbrough, Mantez Thompson, my brothers Brandon, Jerrell, and Tyrese. THANK YOU ALL! 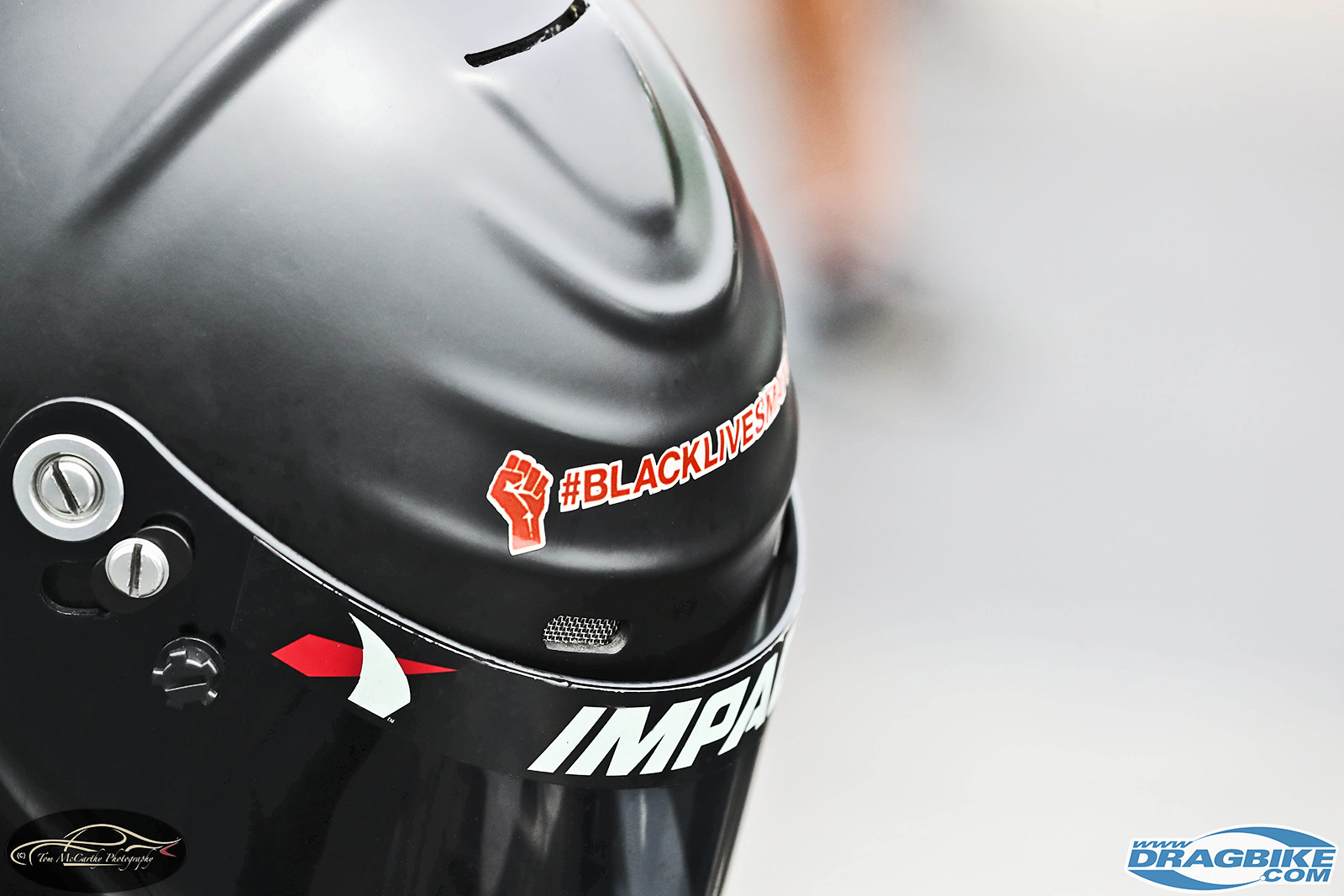