Aaron Deery is no stranger to very fast cars, but a switch to two wheels left him ‘shocked’ by the experience and ready for more ahead of the January 2 Nitro Slam at Perth Motorplex.

Deery is a veteran competitor in Top Alcohol, where his dragster has covered a quarter-mile (402m) in just 5.48 seconds, in which time it reached 412kmh. And yet nothing could prepare him for the first time he rode a Nitro Bike last season.

“It feels like you are going twice as fast for some reason,” he said. “The dragster is fast, but it is two different kinds of speed applications. On the bike you are out in the open air and there is all this noise, the wind is blowing your leathers around and you are trying to tuck in and stay out of it all. Muscling the bike is a completely different experience.” 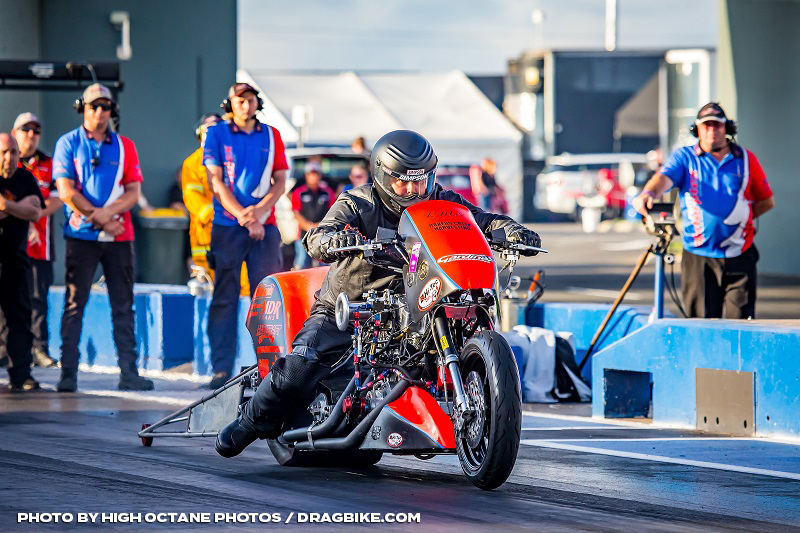 Deery has spent some time tuning Nitro Bikes across his drag racing career. When team owner Benny Stevens made an offer to ride one, Deery could not have been more keen.

“We had talked about me riding the bike for years and the timing was right,” he said. “I said hell yeah, let me have a go! Everyone has known me as a dragster guy and I wanted to step outside the box and show I can do other stuff too.”

Deery commenced licensing runs and found himself deep in a totally different drag racing experience to what he was accustomed to.

“The first pass was a massive shock to the system,” he said. “But I really enjoyed it once I hit the throttle. I was amazing and I wanted some more.

Deery will be a part of the strongest Nitro Bike field so far this season, with eight riders hoping to take the win at the Nitro Slam. Among the field are former national champion and track record holder Jay Upton, as well as Wayne McGuinness, Greg Durack, Benny Stevens, Les Holden, Justin Voadanovich and Ricky Wood. Deery is optimistic his first 6sec. pass could be on the cards.

“The bike was showing really good early numbers last time I rode it,” he said. “The main thing is making sure we line the bike up really straight, as they are difficult to steer at speed, and that takes a lot of concentration on my behalf.”

The January 2 Nitro Slam at Perth Motorplex will also feature round two of the BME Nitro Championship, round three of the Summer Slam and round four of the WA Drag Racing Championships. Sportsman qualifying begins from 10am with features from 4.30pm. For more information, visit www.motorplex.com.au