Top Bike rider Adam Layton had a huge weekend at Sydney Dragway during the Santo’s Summer Thunder on January 19 & 20.

Not only did he run into the sixes for the first time, but his nitro-burning Top Fuel Harley-Davidson also recorded a personal-best ET of 6.49 seconds, smashing his previous PB of 7.01 seconds.

Layton then topped it off with a runner-up finish that moved him into second place in the 400 Thunder Top Bike championships!

Leading up to the event, the Panel Show TV crew dropped into the APL Performance Bikes shop for an exclusive interview. It was lights, make-up, cameras and action with host presenter Rob Oberg interviewing Layton one-on-one. Then on Thursday morning it was another appearance on the show as a prequel to the Santo’s Summer Thunder event. Head to wwwthepanelshow.tv for more info or www.facebook.com/ThePanelShowTV

Later that night it was time to burn some nitro at Sydney Dragway’s Bike Night when Layton and Mark Drew paired up for a grudge race. 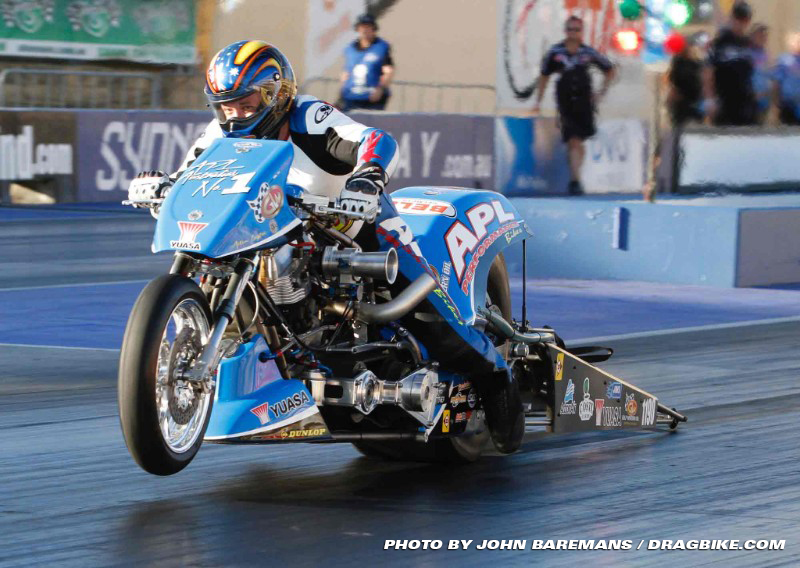 “This was a good promotional opportunity to showcase our nitro-burning Top Fuel motorcycle to the crowd,” said Layton. Many of them have never seen a nitro H-D, let alone sniffed nitro, so it was a win-win for our sponsors, the track, the sport and us.

Friday was Day 1 of the Santo’s Summer Thunder. The first test run saw the APL Performance Bikes Harley head towards the right hand lane wall, leaving Layton with no option but to shut off early and roll through in16-second. The next run was slightly better recording an 8.74 timeslip.

On Saturday Layton came out around midday for a run and stunned everyone with a 6.499 ET at 187.70 mph [302.07kph]. This not only moved him up into second place, but it was his quickest pass ever, and his first six-second run.

“Wow”, said a happy Layton. I’ve always known the bike had the performance potential, but to go that quick in these hot conditions is a testimony to my crew and the effort they put in.

“In the deep end it felt quick and I rolled off the throttle early. I was thinking maybe a high six, but this just blew me away. It took a bit of muscle to pull the bike up, ending up just short of the sandpit.

“I had no idea of the time but I sure saw a lot of stunned looking officials. IHRA Australia manager Maurice Allen came up and said what do you think you just run. I said no idea. He then told me and I just about fell off my bike! I’ve always known this bike has the potential to run the numbers but I sure wasn’t expecting a .49!”

Layton’s first pass in the three round All-Run format was a solo when Mark Drew wasn’t able to start his bike. The APL Performance Bikes Harley carried the front wheel but then dropped a cylinder and slowed to a 6.978 at 168.94 mph [271.88kph] for the win.

The second round was messy when Layton rolled the beams going into stage. He was pulled back for another shot at the tree, while Barchet’s nitrous Suzuki stalled and was out.

Layton left on the green and went through in 7.13 seconds but had a wrestle on his hands as the bike moved close to the centerline. Unfortunately he lost the battle and took out the timing blocks, so neither rider receiving any points.

Moving into the A Final, the pairing featured Matheson and Barchet, when it should have been Layton. An error in the points tally was the cause thus mixing up the pairings.

As such, Layton took on Drew for the B Final. On the green Drew was out first with a .060 reaction and looked to have the race in the bag until his bike crossed the centerline and took out the timing blocks. This stopped Layton’s clocks early handing him a fake 6.292 ET at 184.90 mph. Drew’s 6.57 was disqualified.

“It was not the way I wanted to finish the weekend as it would have been great to line up against Chris [Matheson],” said Layton. In the end when the dust had settled I still picked up championship points and my second silver 400 Thunder trophy, so I’m happy with the outcome.”

“On behalf of Adam Layton Motorsport I would like to thank my crew, family, and all our awesome sponsors including Gulf Western Oils, Yuasa Century Batteries, Polaris, Dunlop Tyres, Autolite Spark Plus, Sydney Custom Spraypainting. I really appreciate your support!

“Can’t say enough about the fans. I had a great time meeting you all during the autograph session on Saturday. It had a blast and appreciated your kind words of support. Means a lot to me!

“Special mention to the Sydney Dragway officials for their hard work and giving us a great track despite the extreme heat. Speaking of heat cheers to Actron Air for keeping me cool with their fantastic Aussie product,” grinned Layton.

Chris Matheson leads the 400 Thunder Top Bike Championship points after three rounds with 287, followed by Adam Layton on 169. Coming in third is Chris Porter on 150. The next round will be held at Perth Motorplex on March 3-4 with the Mac Track Westernationals.