Day one of the 48th annual Goldenstates, featuring the latest rounds of the Burson Auto Parts Australian Top Fuel Championship and the Australian Drag Racing Championships for Top Doorslammer and Top Fuel Motorcycle, has concluded with the top qualifiers in each class celebrated ahead of racing tomorrow.

Following qualifying in bitterly cold conditions this evening, Damien Harris (Top Fuel), John Zappia (Top Doorslammer) and Benny Stevens (Top Fuel Motorcycle) will lead their fields to racing here at the Perth Motorplex tomorrow (Saturday 12 November) – with the main show to kick off from 4.00pm in a reschedule from the original 5.30pm time.

Also celebrated today were the winners of the postponed Alice Springs finals for Top Fuel and Top Doorslammer.

In the Top Fuel Championship, Damien Harris took the Alice Springs A-Final win over Phil Read with a 3.77 second pass – a new track ET record. Wayne Newby won the B-Final against Peter Xiberras, shutting off early after Xiberras encountered wheel shake and shut down off the launch, while Phil Lamattina – who blew a diff in the previous pass – absolutely pushed his Top Fuel Dragster down the track to ensure he took the C-Final win over team-mate Shane Olive when both cars encountered issues off the hit.

For the Rapisarda Autosport International team, the result for Harris and crew chief Santo Rapisarda Jnr was a prefect start to their weekend.

‘For Jnr and Damien it was a great result, they ran a 3.77 with a 4 in that final round and it was the quickest run of the day as well as the session. Where the other cars seemed to struggle where they were just cruising around setting track records! It was a great way for them to win the Alice Springs finals, and also claim the record,” Rapisarda Autosport International’s Santino Rapisarda said on behalf of the team.

“For the team as a whole, there is room for improvement with the car that I am on for Wayne Newby, and hopefully Damien and Jnr’s success can continue into tomorrow and we can try and get ourselves into a good position for some more high-performance runs.”

In ADRC Top Fuel Motorcycle, Benny Stevens rode through for the top qualifying spot ahead of tomorrow’s racing.

“When we came to the track everything seemed all right with the bike, but we went out for the first lap and we melted the clutch on the startline,” Stevens explains.

“We then went back to the pits, turned everything around, assessed all the conditions and put a tune in which we had for similar conditions, and it went 6.60 which we were really happy about.

“We made a few more adjustments as the night went on, and we finished up with a 6.54, so we were pretty happy with that!

“We are feeling good ahead of tomorrow, we will go out with the same attitude again, make a few changes, and hopefully we can creep up on it.”

In ADRC Top Doorslammer, John Zappia claimed the Alice Springs A-Final victory, taking the win over round one winner Kelvin Lyle while also claiming the top spot on the time sheets ahead of tomorrow’s three round of racing for the Goldenstates. He also claimed a new ANDRA record thanks to his 5.668 second pass. 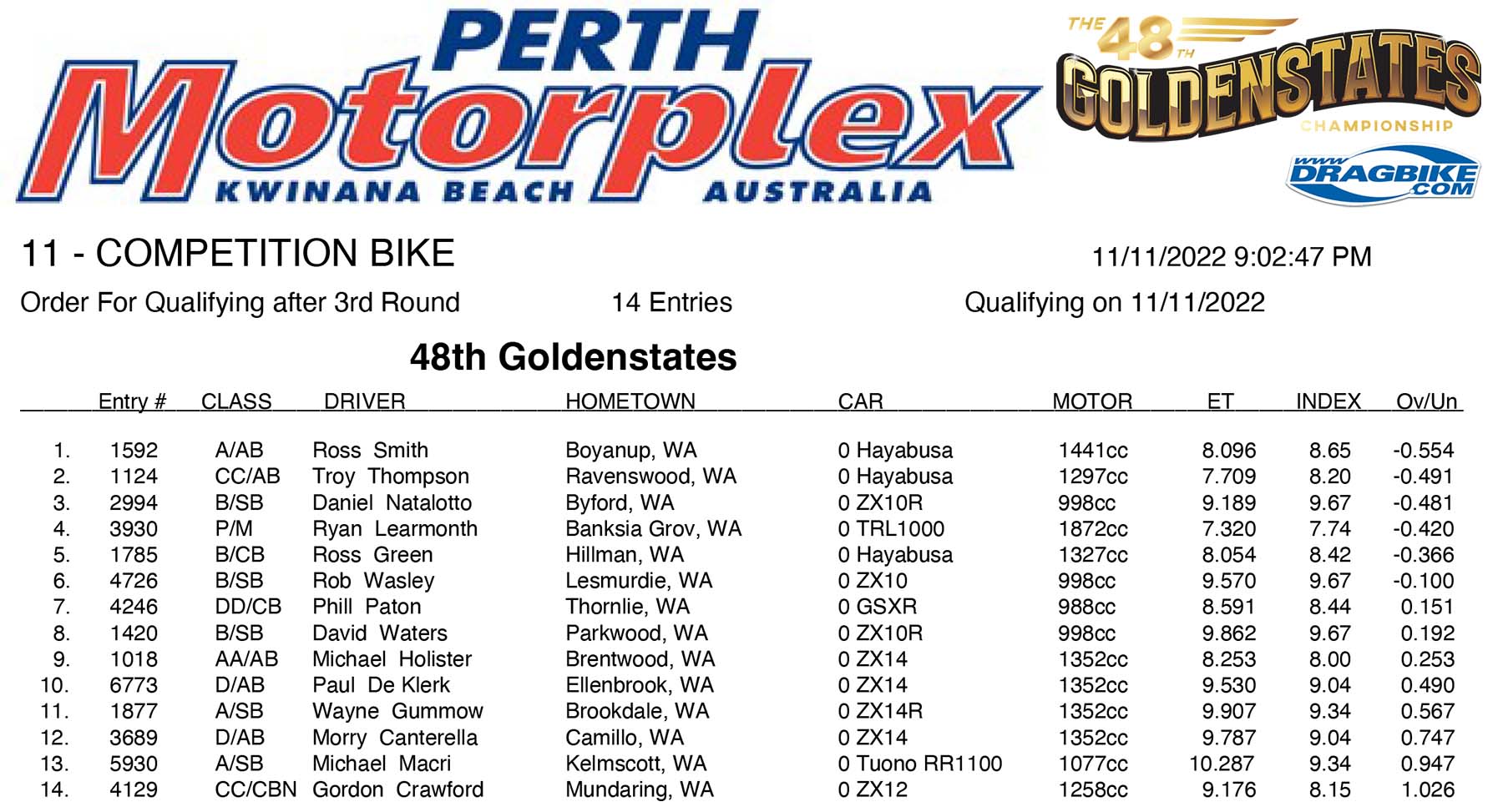 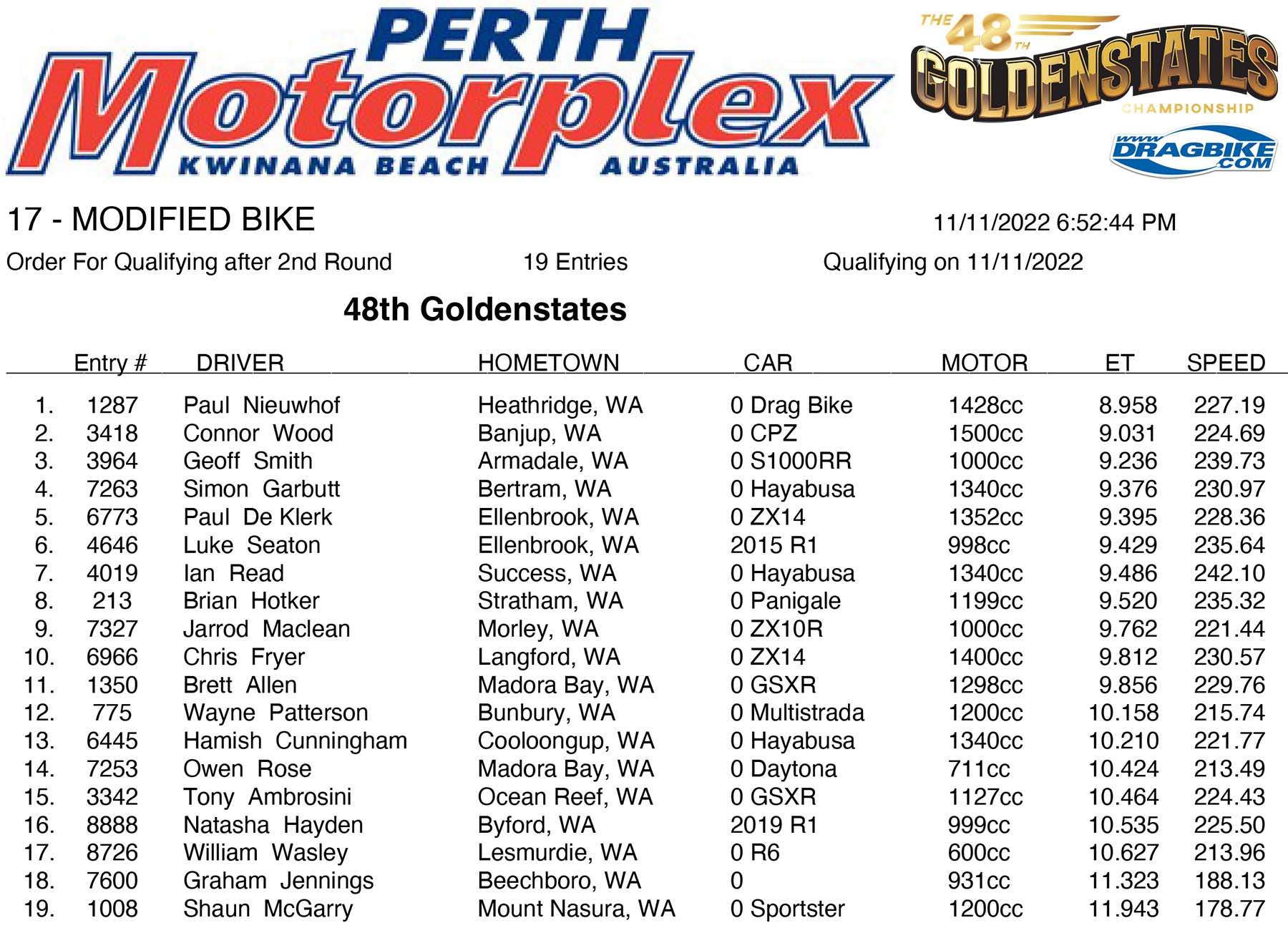 Full time sheets from today’s qualifying action can be viewed online at https://motorplex.com.au/drag-results/

The Top Fuel, Top Doorslammer and Top Fuel Motorcycle action at the Perth Motorplex will continue tomorrow, Saturday 12 November, with three rounds of racing starting from 4.00pm (all times local and approximate). For event information including full schedules, entry lists and more, go to www.motorplex.com.au – please note, an updated schedule will be posted in the morning of Saturday November 12.

The Goldenstates will be held across November 11 and 12. For full event information, schedules and more, go to www.motorplex.com.au