If asked to describe his dream season before this year, American Drag Racing League (ADRL) Pro Extreme Motorcycle rider Eric McKinney might have struggled to find the perfect description.

But after a 2012 ADRL season that ranks as one of the most impressive in the organization’s history, McKinney now has that answer.

In a season that saw one dominating performance after another, McKinney’s season became more magical by the race. When it came to its incredible end, McKinney had seven victories, nine finals appearances in 10 races, a world championship and the 2012 ADRL Driver of the Year word.

In other words, it turned into a dream season that he could have never imagined. 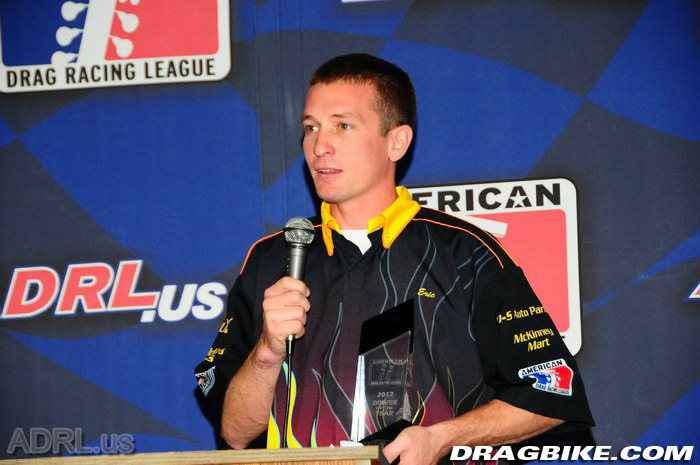 “This entire year was a picture-perfect season. We couldn’t have drawn it up any better,” McKinney said. “We had a couple engine problems early in the year, but the next thing you know, it was win after win. I don’t know how to explain it. This has just been amazing. Behind the scenes, we were working really hard and it kept getting better and better.”

With each passing event, McKinney somehow found a way to top himself, jumping into the points lead in May after winning his first event in nearly three years at the Northeast Drags II presented by Penske.

Despite a hard charge from Casey Stemper to kick off the summer, the points lead never left McKinney’s side. He won in St. Louis in June and then McKinney and his team, which includes his father, mother, uncle and former PXM world champion Ashley Owens, took it to another level over the final five races.

From July to the final brushstroke at the World Finals VIII presented by CarSafe in October, McKinney never lost a round, going an unbelievable 18-0 in the process.
Included in that five-race winning streak to conclude the year were the quickest times of the year – 4.02 and 4.03 – the fastest run of the year – nearly 177 mph – and the best reaction time of the year. 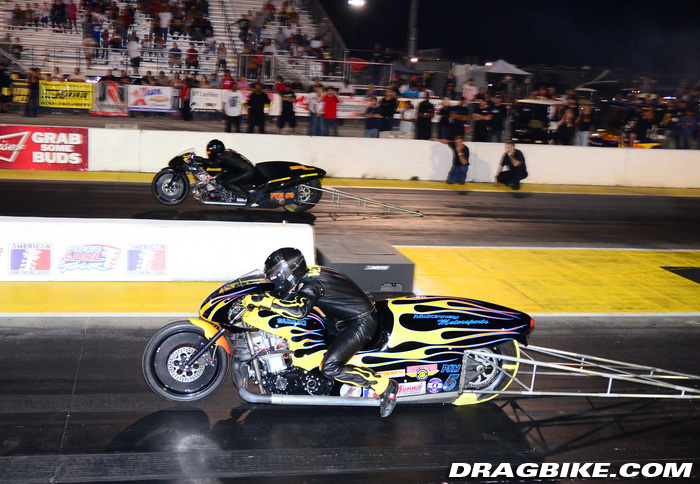 In the process, McKinney racked up more than 5,000 points, which made him an easy selection for the 2012 ADRL Driver of the Year.

It’s an award that surprised McKinney when it was announced and continues to leave him in awe, but it’s one he undoubtedly deserved after his marvelous 2012 campaign.
“To me, that was as big or bigger to me than the world championship,” McKinney said. “We just feel fortunate to be able to have this class in the ADRL. It just blows my mind that I even got that.

“All these drivers in the ADRL, they’re just the greatest. To me, I never thought I was at that level. This year has just been nothing but great for us. It’s an awesome feat and I’m in awe of being Driver of the Year. It’s just a great thing.”

As the winning streak grew McKinney said he “started thriving on the pressure,” and he delivered one clutch performance after another.

But perhaps the two the stood out most was going 4.08 to beat Stemper in front of a huge crowd at zMAX Dragway for Dragstock IX, and winning the Summit Racing Equipment Ohio Drags VI presented by Mickey Thompson at Summit Motorsports Park.

That was McKinney’s closest race to him and the victory, which came in front of a massive following of family and friends, clinched his first ADRL world championship.
“I was surprised at how many people showed up to support me. That really meant a lot to me. That’s where we wrapped the championship up, and it all just kind of played out like a fairy-tale,” McKinney said.

After figuring out crank issues that bothered the bike early in the season, McKinney and the team kept progressing, even going to a new engine program for the final race in Dallas. 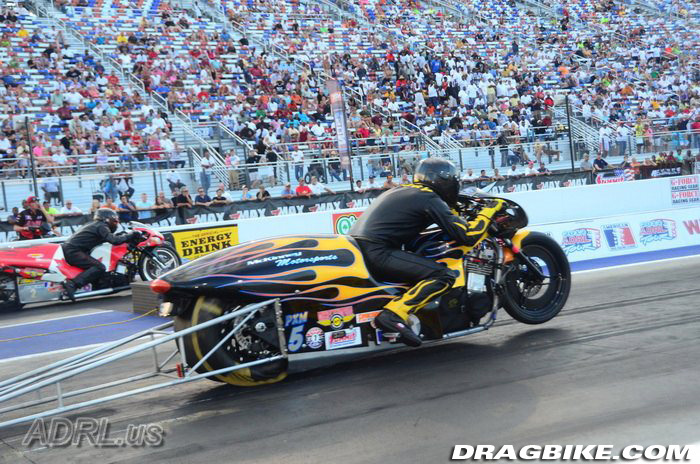 There, McKinney posted an impressive seven runs between 4.03 and 4.08, giving a glimpse of what may be in store for 2013.

“It’s a smaller motor and a new engine program we’re going to try next year. We put that in and kept hitting it harder and harder, and it kept taking more power,” McKinney said. “This new program has already showed a lot of potential.”

But no matter what happens in the future, McKinney knows that 2012 will be a year he will never forget.

“This year, from the way it started with getting Ashley on the team, to the whole season, it’s just been incredible. There was never anything out of our comfort zone and it just made it that much easier for me,” McKinney said.

“I’ll never forget this year, winning Driver of the Year and winning so many races. It’s always going to be remembered as a special year.”