The American Drag Racing League (ADRL) concluded its 2012 season with its annual Racer Appreciation and Awards Gala at the Champion’s Club at the Texas Motorplex on Sunday, one day after it completed the World Finals VIII presented by CarSafe.

The ADRL also announced its special award winners, naming PXM’s McKinney its 2012 Driver of the Year, Extreme Pro Stock standout Todd Hoerner its 2012 Rookie of the Year and zMAX Dragway in Charlotte, the host of Dragstock IX, its 2012 Track of the Years.

McKinney entered 2012 with championship hopes, but it turned into much more than that during one of the most dominant seasons in ADRL history.

McKinney won his first race of the season in May at Maple Grove Raceway, but really turned it on down the stretch, winning the final five events of the year, including Saturday’s World Finals.
Overall, he finished with seven wins and nine finals appearances, running as quick as 4.02 in a thoroughly magnificent season.

“This whole team is incredible. If it wasn’t for them I wouldn’t be here. They definitely work their tails off, and that makes me more comfortable on the bike, and that’s what it’s all about,” McKinney said.

“When we come to race, we’re here for one reason and we do everything we can to win, but we could have never imagined having a year like this. It’s incredible and it is just overwhelming.” 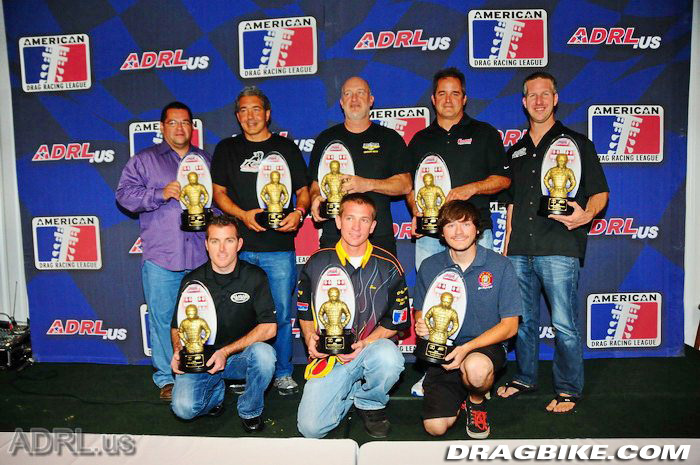