Sunny skies, over 300 competitors and thousands of eager fans were on hand for the AHDRA’s season finale at The Strip at Las Vegas Motor Speedway, October 19th & 20th.

Riders from the east and west tested their skills Saturday when the 2nd Screamin’ Eagle High Stakes Shoot-out was held, with over one hundred riders chasing the $12,000 grand prize. Bob Larish of Harrisburg, PA conquered the monster field, taking home the cash with AHDRA veteran racer, Junior Pippin landing the $3,000 2nd place prize.

A beaming Larish says, he not only thanks his wife, but also owes a huge amount of gratitude to AHDRA racers and friends, Bruce and Susie Wevodau. “I actually came to Vegas to haul their bikes out for them”, Larish explained. “Then, Bruce said, what the heck, why don’t you enter this race? And now, here I am. I’ve never won this much money before, so I am ecstatic.”

After a day of mechanical turmoil for many, Saturday’s qualifying left full 16-bike fields in a hand full of AHDRA’s 14 classes of competition.

In the JIMS Top Fuel field, a whopping thirty-two nitro powered entries fought for a spot in Sunday’s show. Nailing the much sought after #1 spot was Japan’s, Tak Shigematsu, who finished the day with a 6.796 at 200.20 miles-per-hour. Foreigners followed suit as Canadians, Ken Kent and Ron Houniet rounded out the top three respectively.

Raising eyebrows in the field was Top Fuel newcomer, Brian Jernigan of Spring, Texas. Jernigan held the #1 spot in round one of qualifying with a 6.981 at 202.64 before he was knocked into the #4 position in the final round, but he prevailed in Sunday’s elimination’s when he made his way through the top guns of Top Fuel to face Canada’s Kent, and took home his first JIMS Top Fuel win in AHDRA competition. 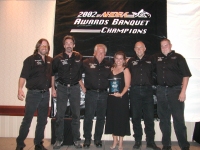 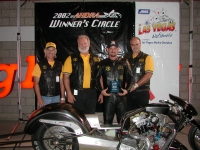 Mission, B.C.’s, Ron Houniet entered the Vegas event with the Championship wrapped, but problems with the Fastlane Racing machine ended his final victory quest in the semi’s, but Houniet was plenty happy to accept the $10,000 JIMS Top Fuel grand prize for his efforts during the 2002 season. Fellow Canadian rider, Dave O’Hara took the #2 National spot, followed by Tak Shigematsu in third.

Tim Kerrigan of Novato, CA also entered Vegas with the Championship secured, and sealed a tough 2002 season with a win in HD Afterparts.com Pro Fuel. Kerrigan, (#1 qualifier) faced #2 qualifier, Chris Streeter of Cleveland, OH in the finals for the victory. After a three-way battle for the Championship between Kerrigan, Streeter and Mike Lehman of Palm Beach, FL, Kerrigan took home the back-to-back Pro Fuel title, with Lehman finishing 2nd and Streeter third. 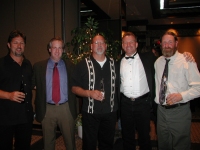 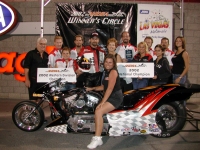 In Pro Stock, Tom Bradford layed down doubles, finishing the season with a win in Vegas and a repeat National Championship. Bradford won seven out of seven in AHDRA outings for 2002 that included a chase to capture the title with Tulsa, OK’s, John Hammock. 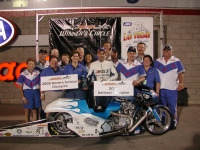 “It feels just as good the last time”, was Kresto Pro Drag Champion Scott Truett’s reaction. Truett won the title in 2000 and after taking a yearlong break, he was back in form for 2002. Truett (#1 qualifier) faced Portland, OR’s, Steve Dorn (#2 qualifier) in the Vegas finals for the win and the 2002 National Championship, which he dedicated to his father, an icon in the sport, Bonnie Truett. 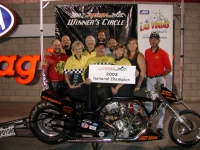 Vegas was the place for Pro Gas competition, as 14 bikes showed up for a spot in the 8-bike field. Rick Maney of Phoenix, AZ grabbed the #1 spot, but was on the trailer early after the bike broke in Round One. Frank Dove (#2 qualifier) should have been stress-free with the championship in the bag and racing at ‘The Strip” for one more win, but after blowing the transmission, his 2002 season ended in the semi’s. Dove of Hughesville, MD took home the 2002 National and East Coast Championship. 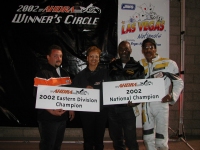 Michael McDole of Bonita Springs, FL was the winner in Vegas after defeating Lee Uhrich (Abbotsford, B.C.) in the finals. McDole finished 2nd in the National standings. 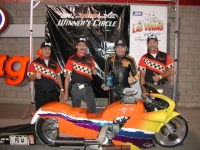 The Lozano-Dwy duo came face to face once again in Joker Machine Pro Modified action. Mike Lozano of San Antonio, TX came on strong early in 2002, with numerous wins, and capturing a few records to boot. Mid-season, with the points weighing heavy in his favor, Lozano sold the bike and would sit back to await his championship title. Enter in the picture. Cliff Dwy of Madras, Oregon, who says it was his wife that did the math, and informed him he had a shot at taking the title from a relaxed Lozano. Dwy’s Sasquatch Racing team set out on their journey for the title, traveling to east coast venues such as Bristol and Rockingham. Not to be ousted so easy, Lozano headed back to the track quickly, with fellow competitor, John Hammock’s bike in tow and a mission to keep his title. Although Dwy pulled out several wins in a battle to the end, Lozano’s consistency kept him on top and the LSB Team finished with the win in Vegas and the 2002 Championship. Dwy finished #2 in National standings and 1st in the Western division line-up. 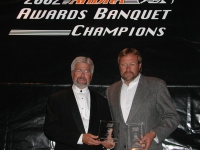 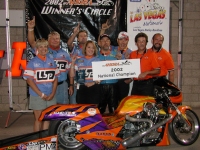 The Championship outcome was not the highlight of the weekend for the Gene Lummus Harley-Davidson team. They had the title clinched early for a third year running.

It was the win in Vegas for Travis Lummus that seemed to bring his father Gene off the ground. “We’ve never gotten past the first round here in Vegas “, the doting Dad commented. “We finally have that off our backs with a win here.” Lummus faced Nicholas Gonatas of Youngstown, OH in the final round for the win. 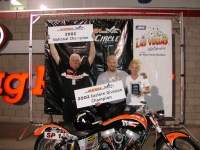 Every round counts, and that could not have been more true for Frederick, MD’s Shawn Vantucci and Ohio’s Dale Miller. Vantucci entered the Rivera-Primo Super Gas competition 20-points ahead of Miller for the National title, but after an upset for Vantucci in round one, Miller advanced two more rounds for the 20-point advantage, landing him the Championship. It was Dan Dalke of Salem, OR that handed Vantucci the round one loss and Dalke’s reign on “The Strip” carried him all the way to the finals against, Willits, CA’s, Rod Cavanaugh, who broke, giving Dalke the win. 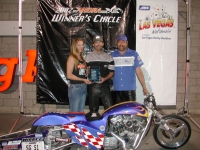 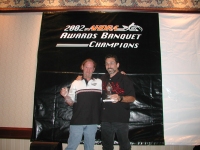 Allen Nusbaum made the trip to Vegas from his Bunker Hill, WV home to collect his Nonpareil Super Sport Championship winnings and elected to spectate at the season closer as a petite Lynda CC Lanier and Jeff Konnoff rounded out the final two. Lanier of Maricopa, AZ was absent from AHDRA competition for most of 2002, but the pint-sized Lanier came on big with her Buell entry, taking the win over Konnoff of Santa Rosa, CA. 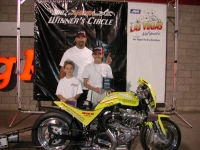 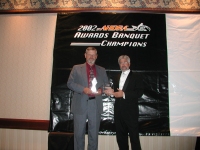 John “The Juggler” Burdynski juggled his way through the Performance Corner Super Eliminator category for a back-to-back National Championship, and after a round one loss the Houston, Texas rider was able to take in the competition from the side-lines as Jon Perry of Toledo, OH made his way through the field for a win over Eric Rodgers of Aurora, CO. 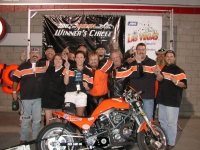 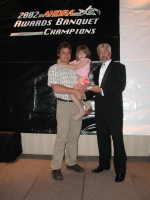 John Henderson of Upper Marlboro, MD says he’s looking for a “three-peat” in 2003 after landing a 2nd Screamin’ Eagle Performance Parts National Championship in Vegas. Henderson was closing in on the competition for a final 2002 victory, before being taken out by Pat Doyle of Davenport, FL. Doyle came away with the win in the finals over John Martin of Mason, OH. 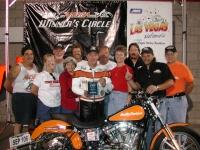 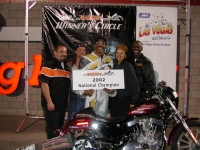 In one of the few Championships riding on the Vegas outcome, the Andrews ET category came down to a round by round battle for points between top contenders, Junior Pippin, Bruce Wevodau and Dan Degood. Pippin of Conyers, GA had already scored a 2nd place finish in Saturday’s Screamin’ Eagle High Stakes Shoot-Out, and following seven rounds of ET competition, it would be another 2nd place finish at The Strip with a loss to Jody Davis of Mesa, AZ, but Pippin’s finish was good enough to take the 2002 National Championship. Wevodau of Harrisburg, PA finished 2nd in the National standings and Degood of Mountain Top, PA finished with the top spot in the Eastern Division. 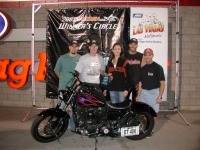 Drew Proffitt of Bristol, CT proudly thanked his crew for putting the “Blast in his Buell” that blasted his way to another National Championship in the Hayes Jewelers Junior Senior competition. Proffitt competed in Vegas for another trophy for the shelf, but was taken out in the semis. Joey Talbott of Forest, VA came away with the win over Brendon Griffin of Cibolo, TX. Proffitt also landed the Eastern division title while Jacob McMillin of South Beach, OR finished first in the Western standings. 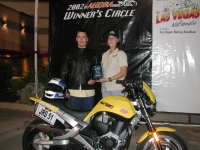 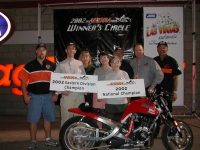 Kaylee Raudenbush of Old Zionsville, PA made her Dad, Dale Raudenbush plenty proud with a win over Isaac Jordan Percy in the Blackfoot Racing Junior Junior Vegas competition, but it was a double dose of smiles for the Danford family of Akron, OH when sons Clayton and Travis took the #1 and #2 spot in the National standings. Clayton took the National and Eastern title in a close chase with brother, Travis. Percy of Blackfoot, ID finished in the top spot in the Western Division. 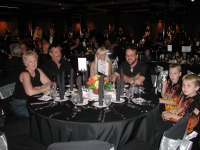 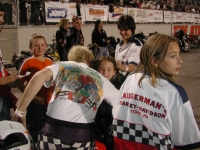 The JIMS Las Vegas Nationals presented by Las Vegas Harley-Davidson was the biggest event yet at the premiere facility and fans were drawn in by a host of pre-event activities that included a gigantic Kick-Start party at the World’s Largest, Las Vegas Harley-Davidson. A visit from Evel Knevel, HBO series star, Chuck Zito, of “Oz” and numerous race bike displays added plenty of excitement for the hundreds of fans on hand. Friday night’s JIMS Rolling Bones party at the Harley-Davidson Café drew the largest crowd ever for the annual celebration; with a nitro sampling onlookers will not soon forget.

There is plenty more to come on the JIMS Las Vegas Nationals presented by Las Vegas Harley-Davidson and the 2002 Championships in upcoming issues of Speed Magazine or visit www.ahdra.com.