Report by Tim Hailey with photos by MotoLenz and Tim Hailey

All-American motorcycle drag racing series AHDRA is keeping it hot with some serious action in the Sunshine State. October 17-18 saw AHDRA’s MTC Engineering Sunshine Nationals at Florida’s Orlando Speed World, which will be followed up by the MTC Engineering World Finals at legendary Gainesville Raceway on November 6-8.

The Orlando race apparently generated enough heat to set off Sunday showers that rained out all of eliminations other than Saturday, when some serious qualifying and eliminator action threw down under partly cloudy skies.

The Pro Dragster class was so enthusiastic that they alone lobbied to run their Orlando eliminations during Gainesville qualifying. Jim Martin qualified number one in the carbureted nitro class with a 7.312 at 170.17 mph, leading a very tight field that saw Florida’s own Preston “President” Bartlett qualify number two with a 7.370 at 174, Atlanta number one qualifier Sam White third at 7.374 at 162, and veteran Rocky Jackson fourth with a 7.57 at 164.

There’s nothing small about Top Fuel, which outdrew NHRA’s seven-bike Dallas field by one. Numidia winner and NHRA Top Fuel Harley record holder Bob “Opie” Malloy qualified number one in Orlando with a blistering 6.29 at 214 mph on his iconic, high-gear only, nitro Buell. 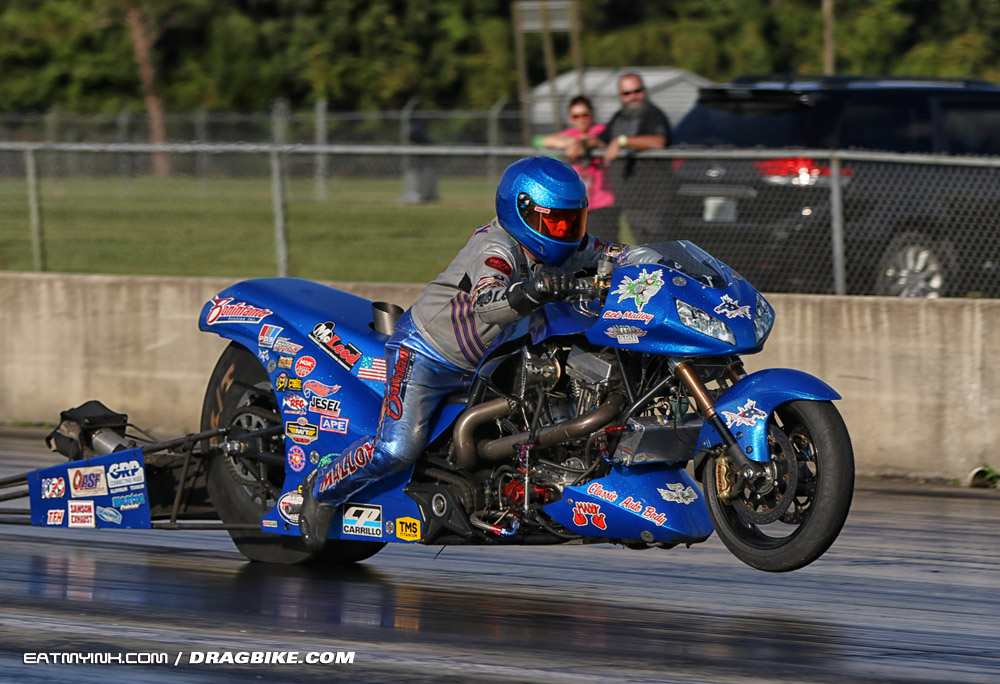 Atlanta number one qualifier Tracy “Bad Apple” Kile was number two in Orlando with a 6.51 run early in the day before slapping the wall on his pipe side in the third round. Kile—whose bike made a hard move due to a bad tire soon out of the gate—was uninjured and the bike repaired in time to race on Sunday. 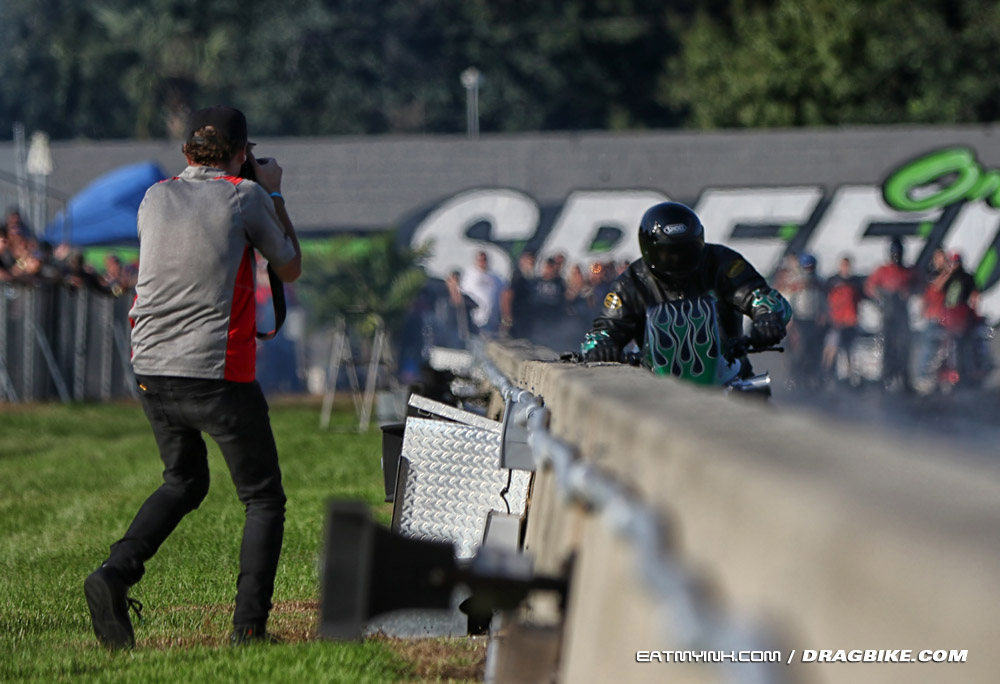 Kile wasn’t the only TF rider to contact Orlando’s concrete, as Floridian Don Becker scraped the opposite wall as Tracy and much further down the track. Becker qualified seventh, and he and Kile were slated to meet in the round one that never happened.

Cordova winner Rich Vreeland qualified third with a 6.77 and was laddered to meet Jim McMillan, who qualified sixth and represented himself well in his first-ever nitro outing.

Expect an even bigger, more competitive filed when fire hits the hole in Gainesville.

Eliminator ran eliminations on Saturday and local hero Mike “Big Train” Terry took the win, expertly piloting his show-stopping chopper in the final round against Vance Houdyshell, who redlit by -.033. The Train chugged down the track to consistent laps in the 12.25 range. 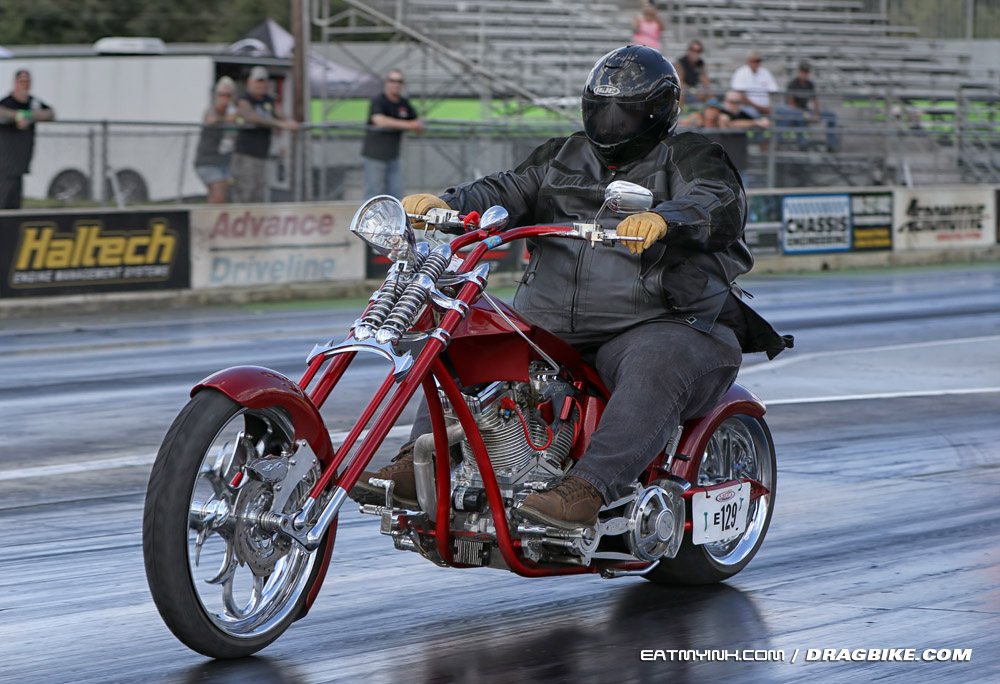 Diesel locomotives trains actually drive their wheels with electricity, and so does the Harley-Davidson Livewire. Donnie Huffman is the best marketing vehicle The Motor Company has for their electric bike, which draws a constant, curious crowd around it in the staging lanes and as it silently moves around the facility. And then it goes out on track for the Trophy class and knocks down steady 11.55s (give or take) for the win. His Orlando runner-up was Tennessee’s Loren Potter. 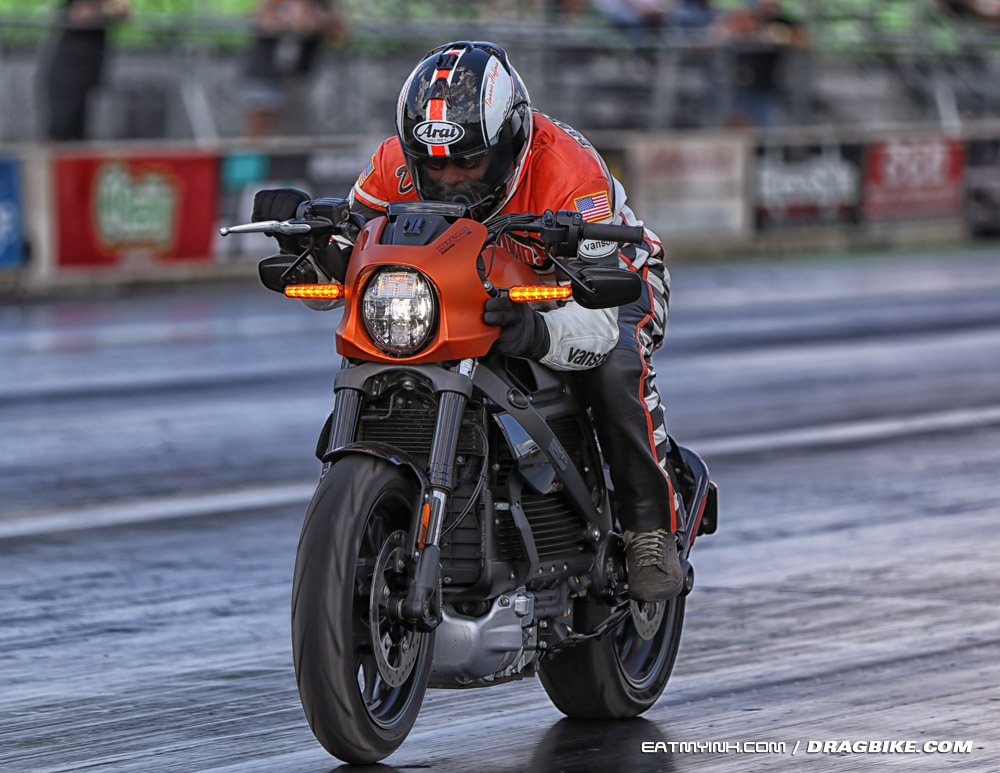 Atlanta Zippers Performance Modified winner Gary Douglass followed that success up with T-Man Performance Pro Mod number one qualifier in Orlando with an 8.75 at 135. 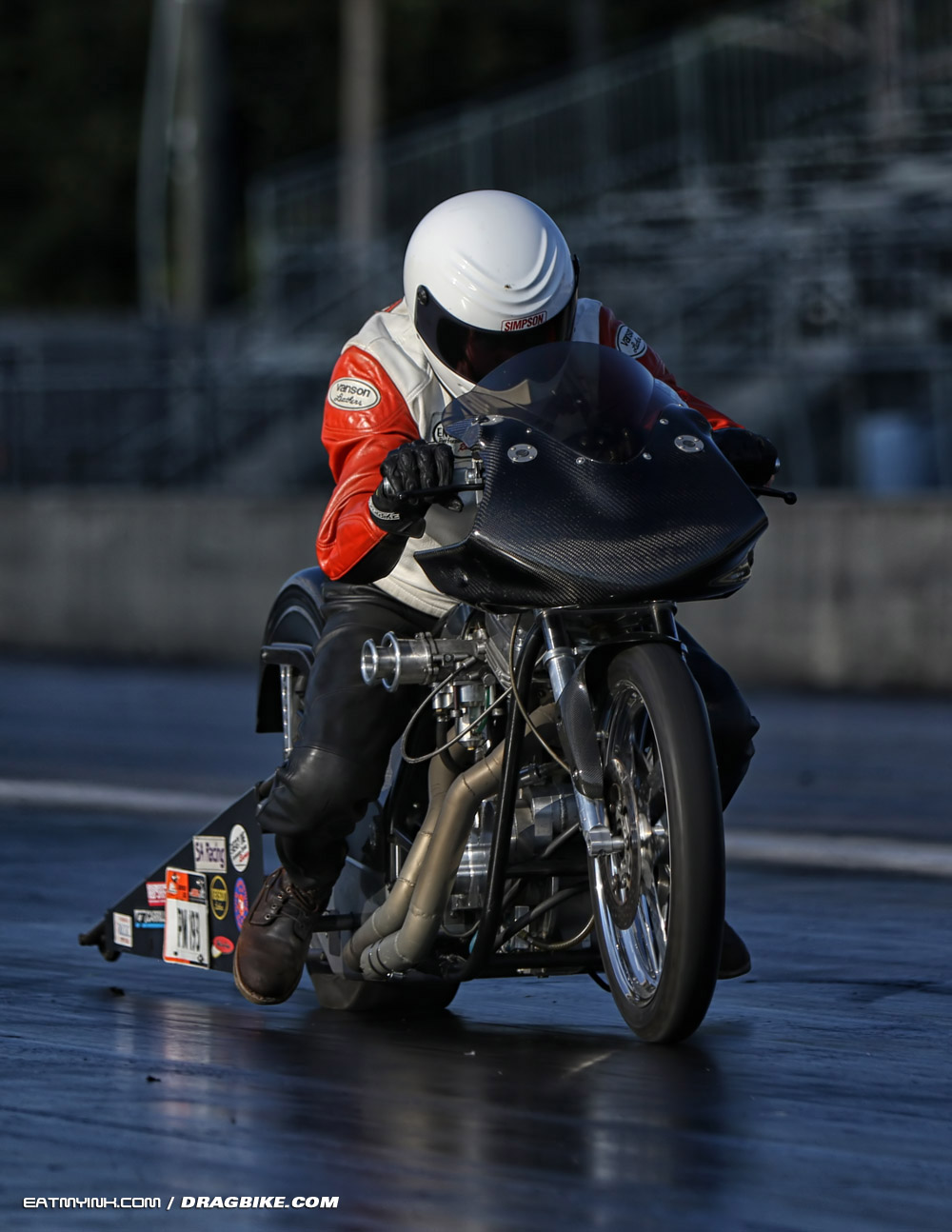 Modified number one honors went to Jeff Workman with a 9.33 at 141. 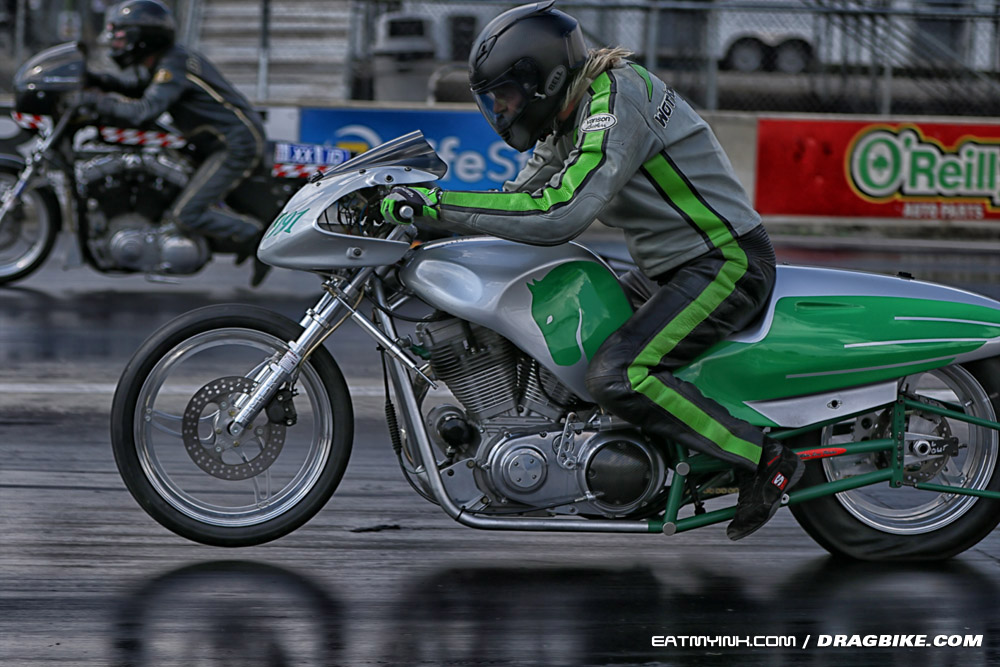 FuelTech racer Mike Motto won GMS Racing Engines Extreme Gas and Outlaw Street at Numidia and Atlanta, and qualified number one in both classes at Orlando—an 8.39 at 156 in X Gas and 8.31 at 160 in Outlaw. 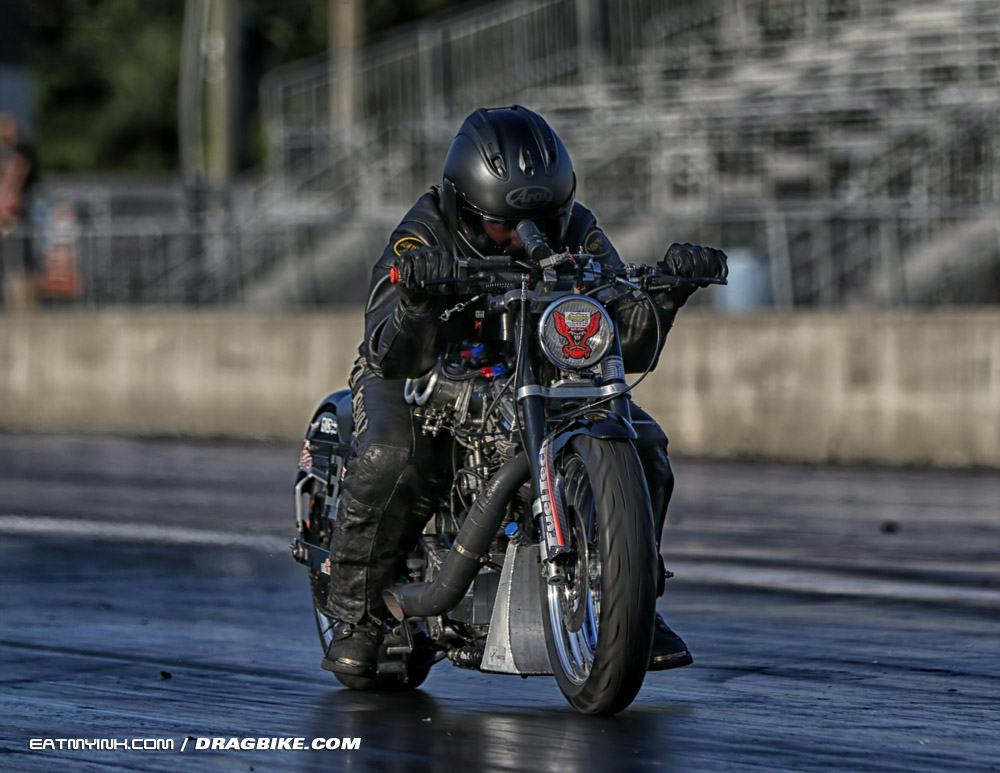 Horsepower Inc. Hot Street number one qualifier went to Rockingham winner Scott Schenkel with a 9.93 at 131, just a smidge ahead of Numidia and Atlanta winner Charley Douglass’ 9.94 at 132.

Numidia Mad Monkey Motorsports Draggin’ Bagger winner Branon White qualified number one in Atlanta, then did it again at Orlando. This time around, White set the class record with a 9.615 at 140.24 mph. 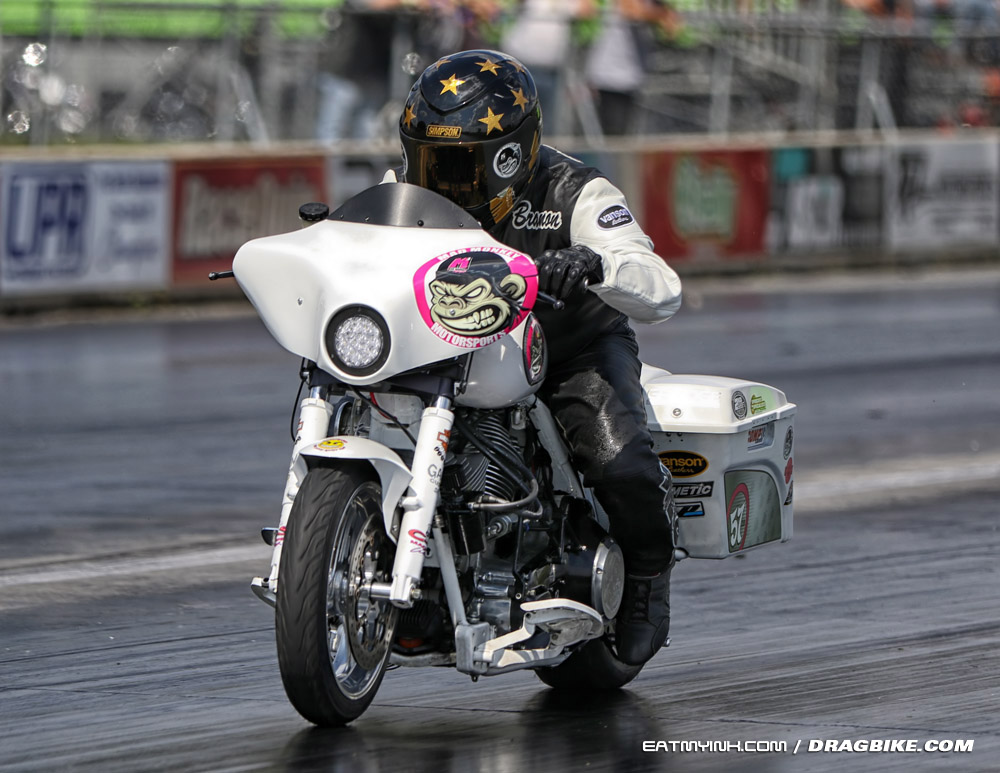 “We made a gear change the week before Orlando,” reported White. “Round one of qualifying I made a mistake and held the clutch too long. To our surprise that was a new record! The clutch was welded together, I could not even grab the ticket—there was no way to stop!”

Bagger racer Greg Quinn stopped considerably more quickly than he intended in Q3 when his ProCharged, former Tii Tharpe bike flipped to 12 O’clock and over backwards on launch. Quinn was OK and his bike will buff out. 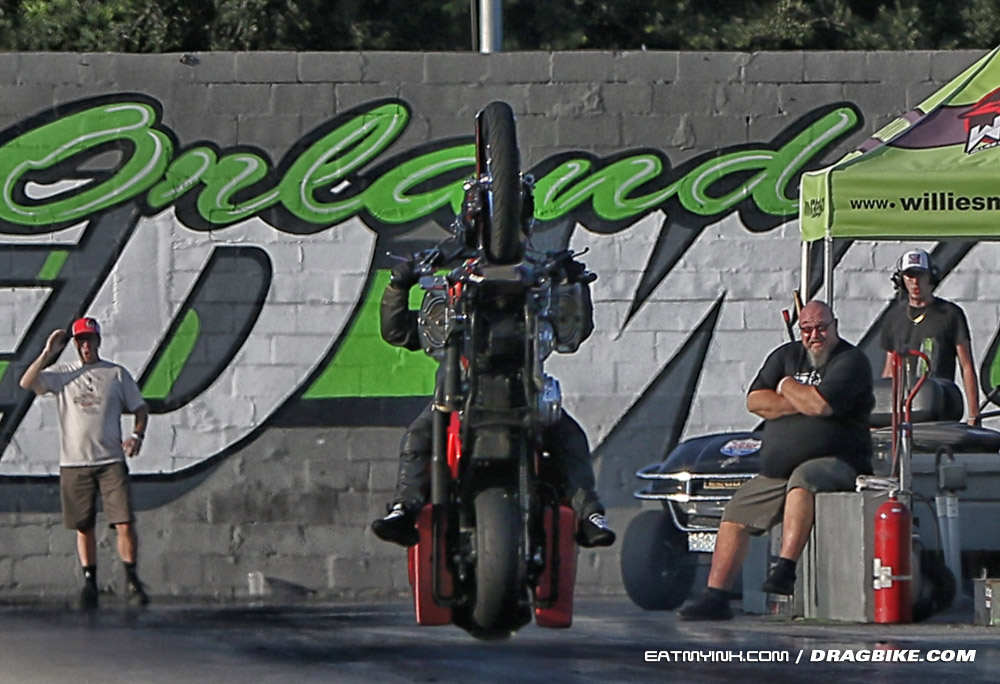 “We do have the 2020 Draggin Bagger Championship sealed,” continued White. “My teammate Travis Groff is second in the points race but is not safe, so our concentration will be on him.

“Gainesville will be epic! It’s been a great season, and going into Gainesville we have two bikes with a championship sealed. The Wild Child Ryland Mason, as a rookie, has won the Pro Street championship. This guy had never rode a dragbike before this year!”

Crosby Blair has ridden a dragbike or two, and runner-upped in multiple classes in Atlanta, but was numero uno qualifier in Vreeland’s Harley-Davidson 9.70 Super Gas at Orlando with a 9.719. 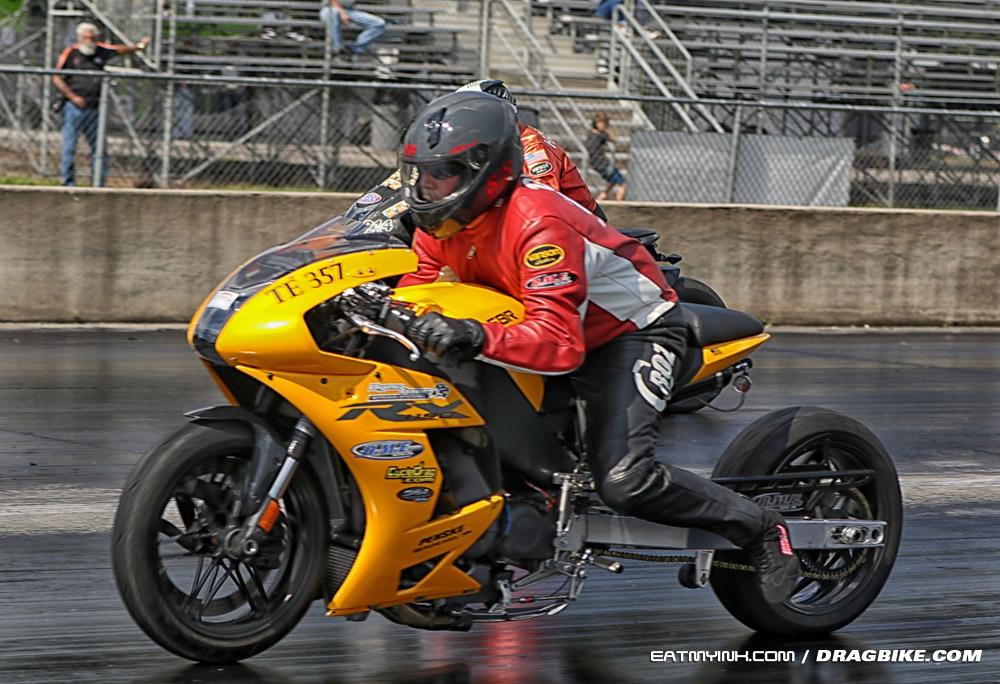 The Atlanta Pro Eliminator 10.90 winner Stoney Westbrook qualified number one in Orlando with a 10.913. 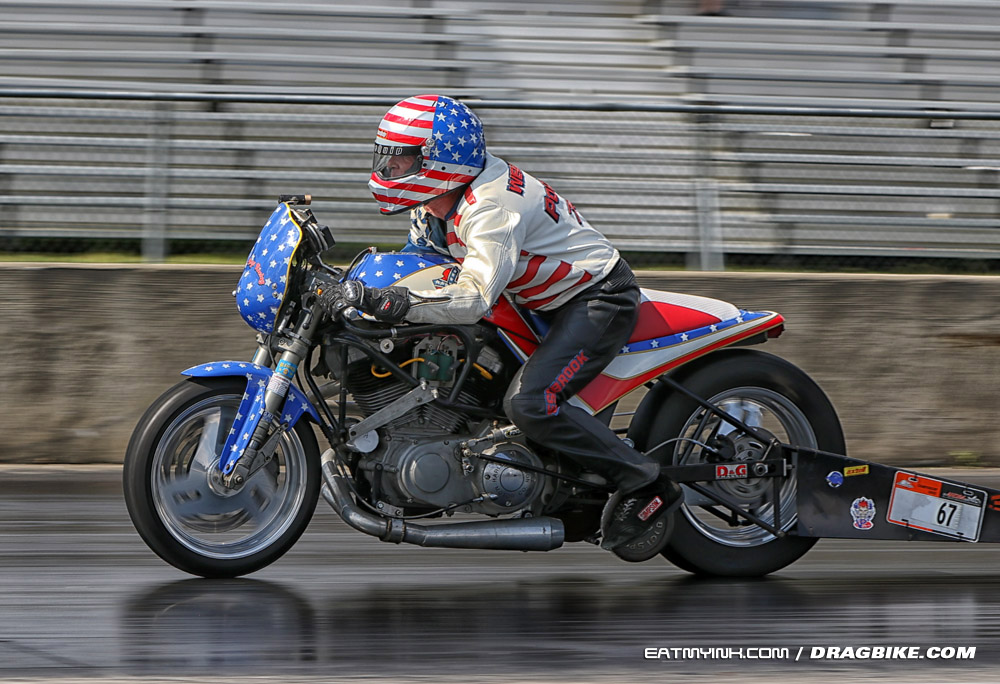 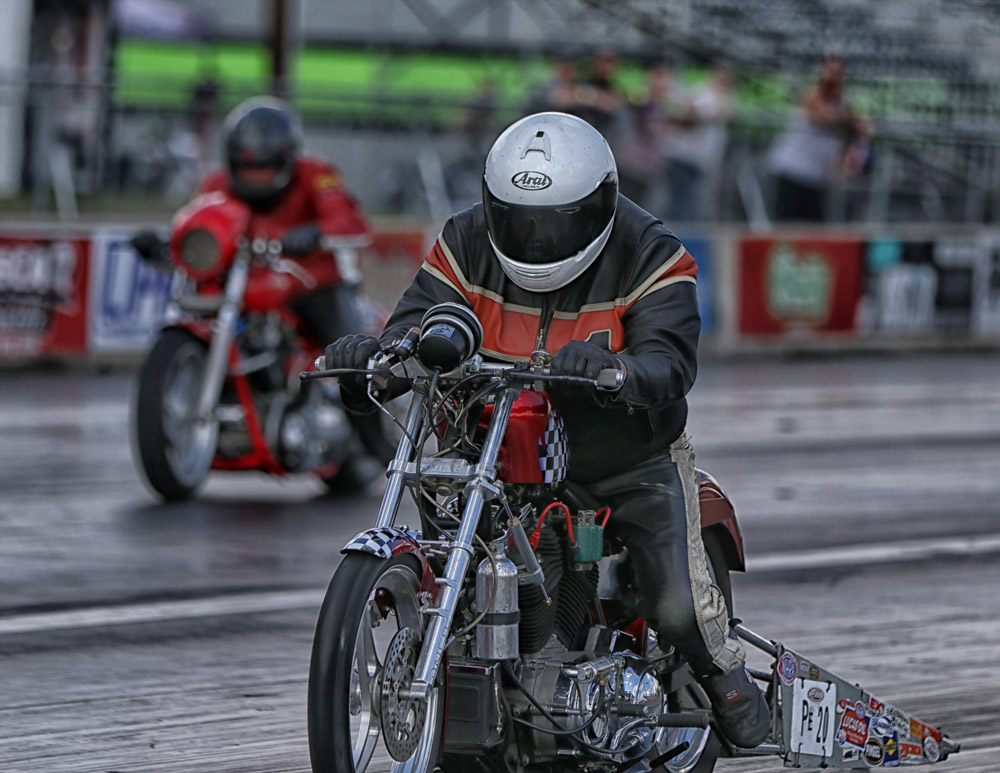 As the Mad Monkey said, Gainesville will indeed be epic as the finest facility in all of drag racing welcomes the hardest working, All-American motorcycle drag racing organization in the business.

And the best tracks aren’t the only thing AHDRA has to offer, there’s Big Money as well. AHDRA will have a $5000 ET shootout on Saturday after qualifying, so get in there and get that cash!

AHDRA’s Bill Rowe and his family, crew, and sponsors—especially MTC’s Eric Hochstetler—look forward to welcoming all the racers and fans to one last race in Florida sunshine before everyone settles their bikes in for the winter.

Championships will be awarded in all categories at the AHDRA Banquet at host hotel Best Western Gateway Grand, located right behind Gainesville Harley-Davidson. Ask for the raceAHDRA room rate.

Don’t miss the chance to stage your bike and race down the hallowed Gainesville Raceway 1320 on November 6-8. This is what the racing life is all about, so trailer up and live the dream!