AHDRA’s final elimination rounds drew red-light fouls in seven out of fourteen final rounds at the Rucker Performance Lone Star Nationals, April 17th and 18th. But for Mike Romine of Sturgis, MI, it was a ride to victory lane on his red Nuclear Tomato over local Texan Mark Revels, who smoked the tire off the line.

This was Romine’s third consecutive appearance in the Screamin’ Eagle Nitro Harley finals since the AHDRA 2004 season opener. This time, he came out on top with a 4.304 at 181.41 mph in a race that was cut to the eighth-mile during Sunday’s eliminations after Orangeburg, S.C.’s Bill Furr suffered a horrific crash following a rear tire explosion. With uncertainty surrounding the cause of the disintegrated tire, AHDRA officials and fuel class riders agreed to cut back to 1/8-mile racing for the remaining rounds. 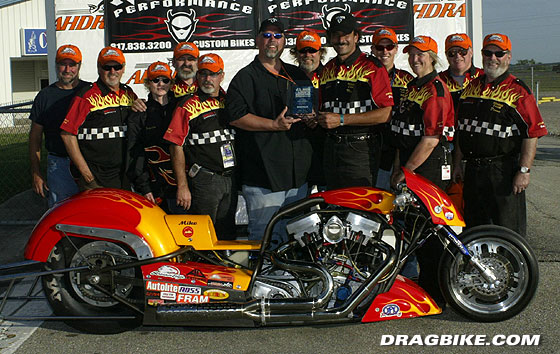 Furr’s crash came after a tremendous 6.54 at 215.00 mph run against opponent Steve Stordeur of Goshen, OH. Several hundred feet past the finish, Furr’s tire exploded into pieces, throwing him off as the bike came down and continued its course down the track, until it finally landed in the sand traps. 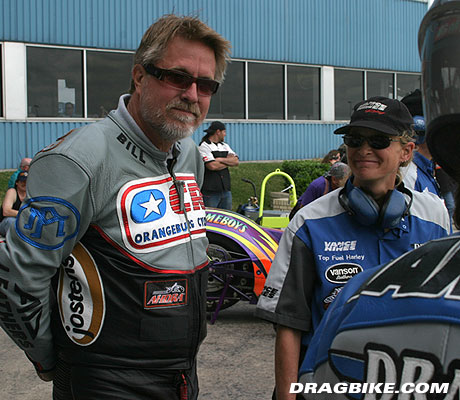 Furr was airlifted to Baylor Medical Center in Dallas, where at press time he had been upgraded to a regular room and out of I.C.U. He suffered broken ribs, a collapsed lung, a broken finger, multiple lacerations, and extensive bruising. Fans can follow Furr’s progress on his website, www.billfurr.com. He entered Sunday’s eliminations in the #1 qualifying spot with a 6.448 at 217.02 mph.

In JIMS Pro Fuel, Mike Lehman of Palm Beach, FL, and Arizona’s Jack Romine (Mike’s younger brother) appeared to be destined for a face-off in the finals. Romine was the #1 qualifier with a 6.697 and boasted top-speed honors with a 202.83, but Lehman had six-second numbers of his own and continued his victory quest in Sunday’s 1/8-mile contest, taking out tough contender Mark Conner in the semis along the way. Perhaps the anticipation kicked in for the pair, as both lit the red-bulb, Romine with a -.234 and Lehman a -.040. It was Lehman winning the showdown with his 4.582 at 155.33 mph over Romine’s 4.540 at 165.88 mph.

In Kresto Pro Drag, there were no red lights, but #1 qualifier Scott Truett (Wichita, KS) was a no-show in the final against Florida’s Chuck Jones. Truett set a 4.541 1/8-mile E.T. record before the Truett and Osborne Pro Dragster locked up on him prior to what would have been good side-by-side racing in the final. Jones and the Freedom Racing team made an 8.743/110.17mph solo run for the win in Texas. 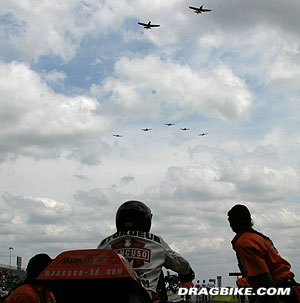 John Burdynski provided the heat all weekend in Dragmasters Hot Street, with record numbers. The Houston native landed new records in the class across the board, with a 10.3588 at 130.92 in the quarter-mile and a 6.530 at 107.24 in the eighth before going to the finals against Mike Roberts of Akron, OH. Roberts left early, drawing the red light, and Burdynski made his quickest pass of the meet for the win with a 10.248 at 130.92 mph.

More from the “red-zone”: Ohio native Dirk Higgins lit the red-bulb in the S & S Pro Stock final against Rick Maney of Phoenix, AZ. Maney and Higgins were the #1 and #2 qualifiers, respectively, and Maney’s final pass, 7.496 at 170.90 mph, was his best of the weekend.

A tree of red in Joker Machine Pro Modified when champion Cliff Dwy (Madras, OR) met Junior Pippin (Conyers, GA) in the final. Dwy left early, but Pippin held the performance advantage in Texas and finished with an 8.367 at 152.61 mph. Pippin had the low E.T. of the weekend with an 8.334, while Dwy provided the top speed at 153.42 mph. Keep your eyes on this pair in the ‘04 points chase. 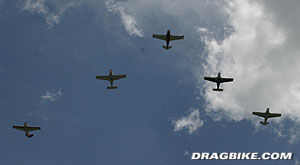 Opening ceremonies at the Rucker Performance Lone Star Nationals were dedicated to 19-time champion and 9-time AHDRA champion Jim McClure. Following a moment of silence in his honor and the national anthem, a fly-over formation was provided by the Coyote Squadron of the Commemorative Air Force as the opening pair of Screamin’ Eagle Nitro Harleys fired up. A special thanks to John Asley of the C.A.F. for helping to honor the memory of a hero.

Next up for AHDRA’s 2004 Screamin’ Eagle Performance Parts National Championship Series is the S & S Cycle California Nationals presented by Drag Specialties, May 1st and 2nd, in Bakersfield, CA.