Only a legend like the late Don “D.J.” Johnson could bring out the Top Fuel Harley-Davidson community like what is expected at the AHDRA season opener at Gainesville Raceway. Named in honor of the man known worldwide as the “Nitro Santa,” the inaugural Don “D.J.” Johnson Nitro Spring Nationals sponsored by MTC and Gainesville Harley-Davidson will be a historic event in nitro Harley drag racing. 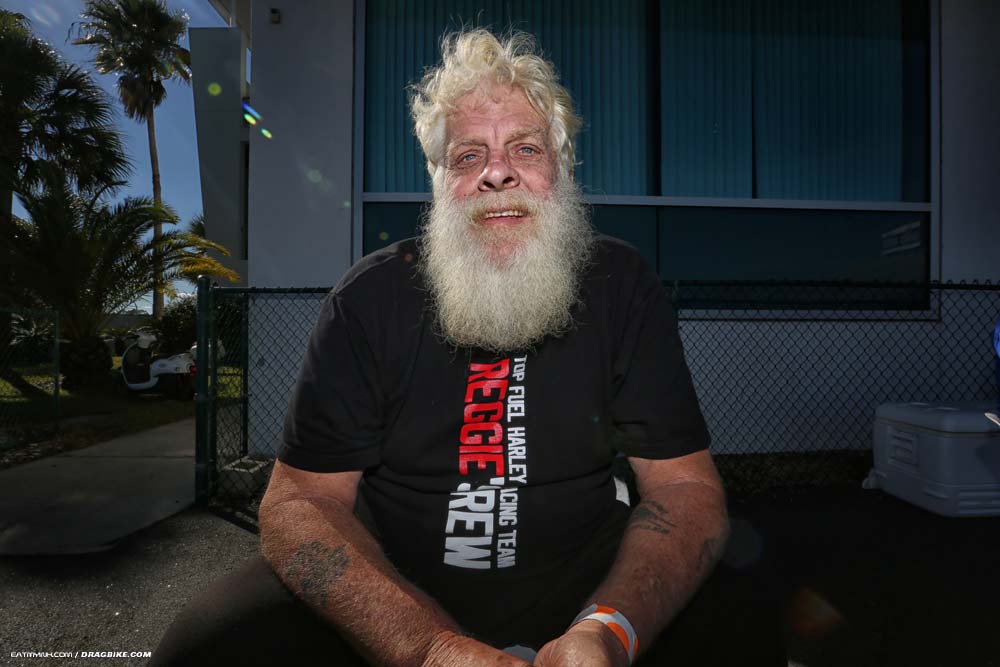 So defending AHDRA Top Fuel champion Ryan Peery will have his hands full at this event, and the whole year as well. The thundering, flaming, nitro Top Fuel bikes are expected to flock to AHDRA races this season like never before.

And when memorializing the legend that was D.J. headlines the event, you can expect racers from all over the world to come pay high-peed homage. 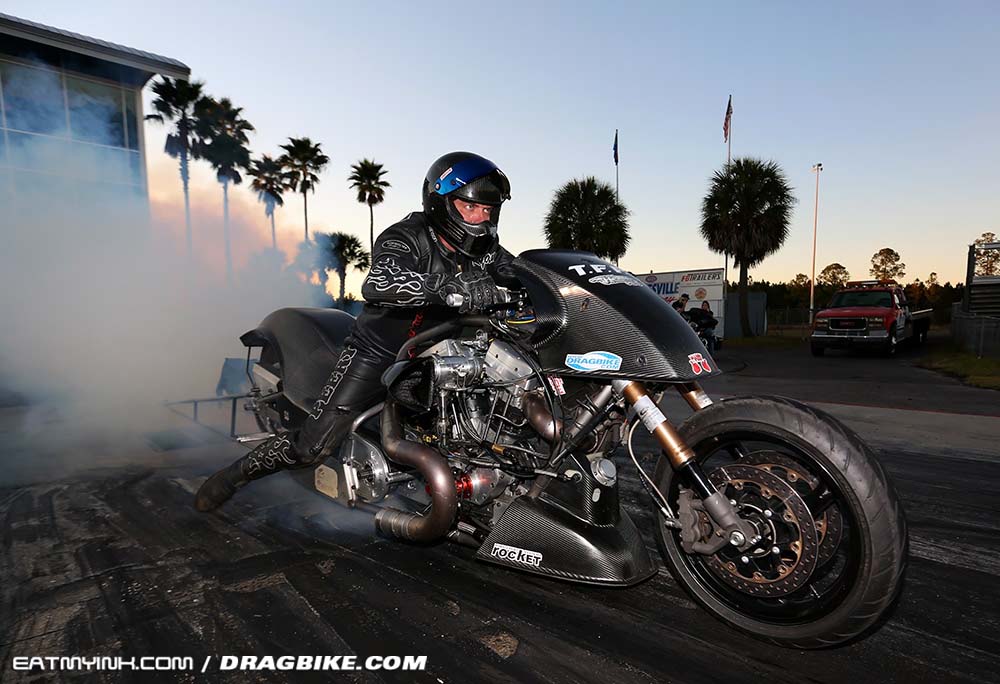 That includes Japanese H-D dealer Tak Shigematsu—famous for his record-breaking kamikaze attacks down the quarter-mile aboard D.J.’s supercharged monster.

Two-time NHRA champs Randal Andras and Tii Tharpe will be there, both riding alongside their team boss Jay Turner—a multi-time, multi-sanction champion himself.

2020 AHDRA champ Rich Vreeland will be in the house, along with Bad Apple Racing’s Tracy Kile and Dr. Jimmy “Mac” McMillan.

Tim Kerrigan will be there to get his and teammate Frank Velasco’s beautiful bikes in the winner’s circle.

Chris Smith, Billy Jackson, and Dean Communal will be back on track, and Rebel Glover will again be on Jake Stordeur’s Knucklehead Racing bike.

So while Peery will have to be on top of his game, he proved what he can do by winning both the AHDRA and AMRA championships last year and damn near winning the NHRA title as well.

Hawaya Racing Nitro Funnybike champion Michael Balch got so inspired by his success last year that he bought his title-winning machine from Red Rhea, who will still be on hand in Gainesville offering his tuning wizardry. 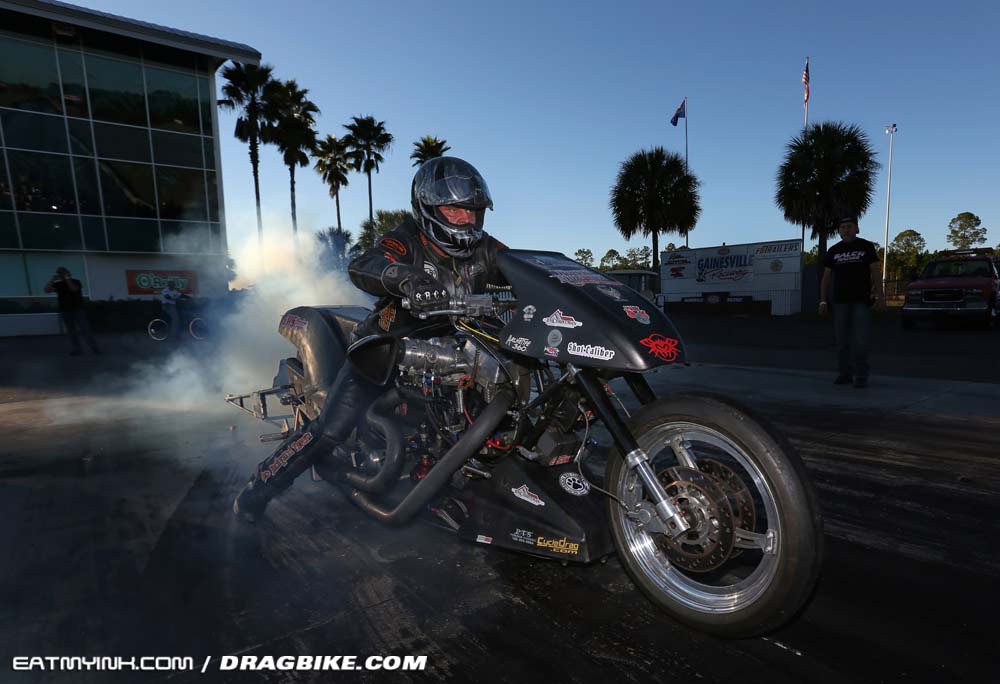 Like Shigematsu, Tadoshi “Reggie” Saito will be making the trip from Japan to offer up some nitro respect to his mentor D.J.

Peery’s Funnybike has been rebuilt and will hit the 1320 with either Buddy Johnson or Chris Smith in the seat.

World Finals winner Armon Furr will be defending the Gainesville winners’ circle with his dry wit and confident throttle hand, and Rocky Jackson will be his usual bad self. 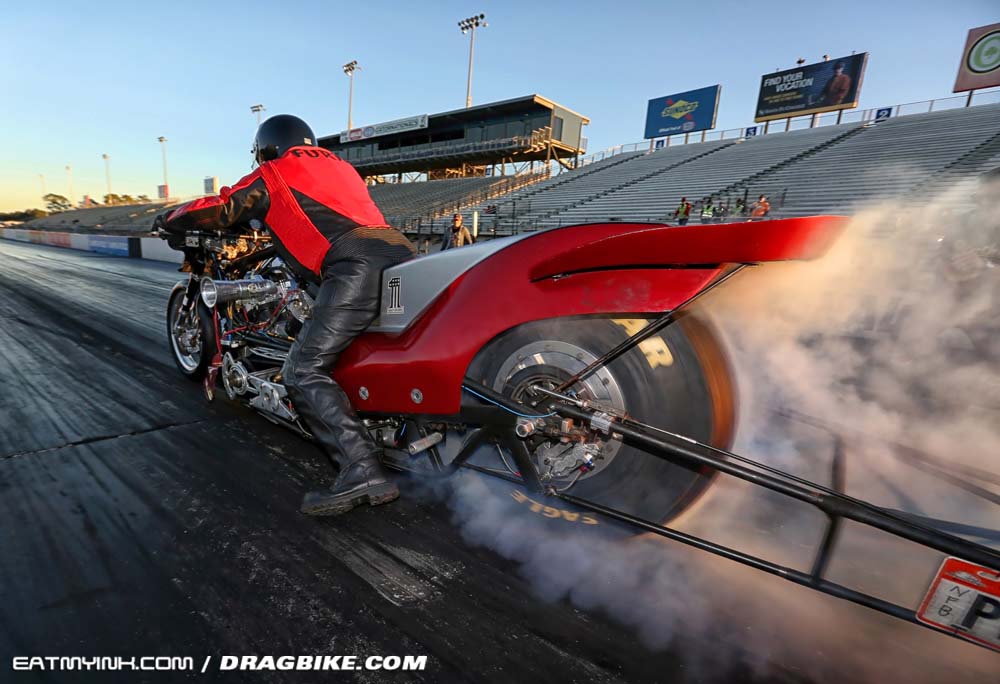 New Funnybike rules allow for 135 cubic inch with transmission, single throttle body, small pump, bikes to compete. “There are a lot of them still around just sitting,” said Furr. “A few of us got together and figured the rules in order to bring more to the class.”

Hawaya Racing Pro Fuel champ Preston “President” Bartlett has decided to release his grip on the class and step out of racing. That move opens the doors for others in the growing carbureted nitro class, with new builds and riders coming online in 2022. 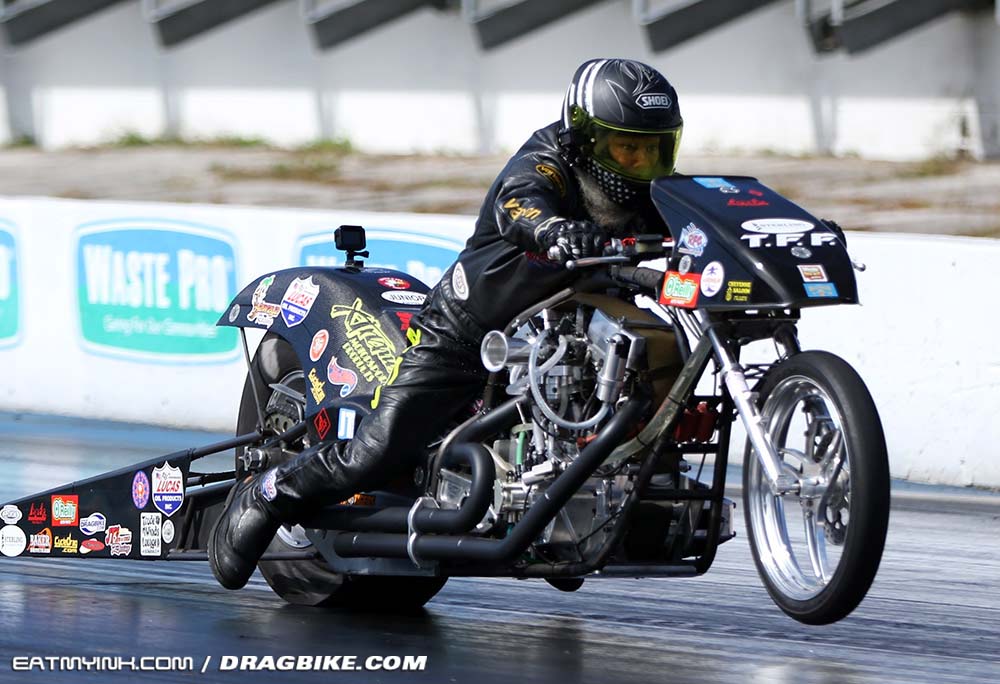 Rocky Jackson, Sam White, Jim Martin, Darren Brinkman and more will be putting these machines through their paces in order to take over Bartlett’s reign. 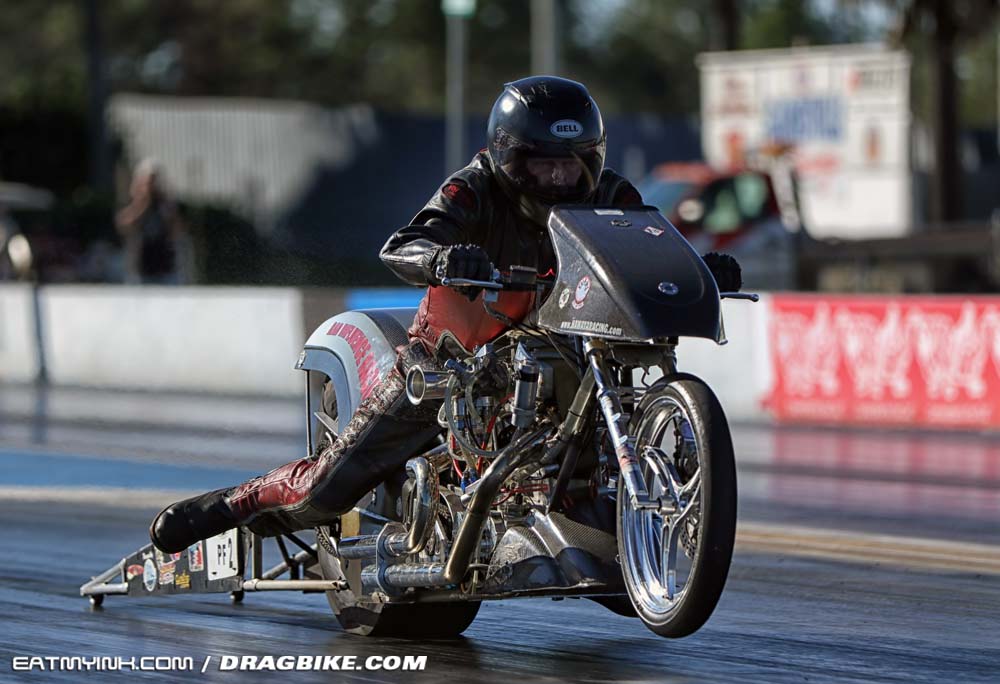 With or without saddlebags, GMS Racing Engines Xtreme Outlaw no-bar bikes use power adders such as nitrous, turbos and superchargers to push the limits of street tires, aluminum, steel, and any fuel but nitro or propylene oxide in American-made V-Twin engines.

Former AHDRA champion Mike Motto is aiming to grab the spotlight back from record annihilator Andy Simon Sr. They’ll both have to face new players, including Charley Douglass. 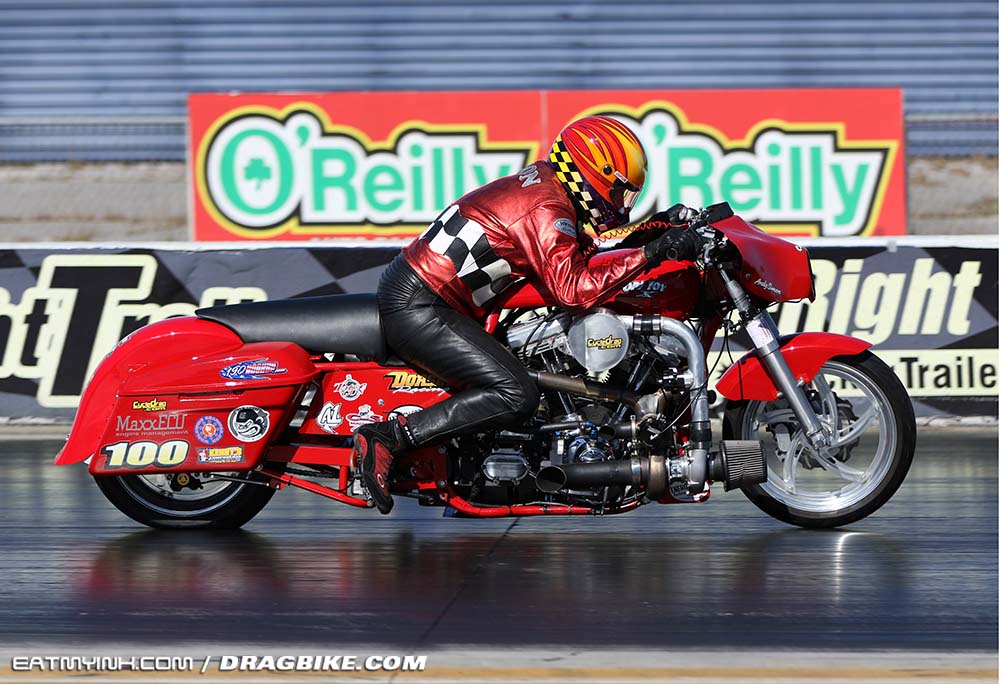 Richard Gadson will take over the seat of the Pro Outlaw Bagger championship-winning 187 Custom Cycles bike, but Victor Gotay will be on hand with a ride of his own to put up a fight—as will many others. 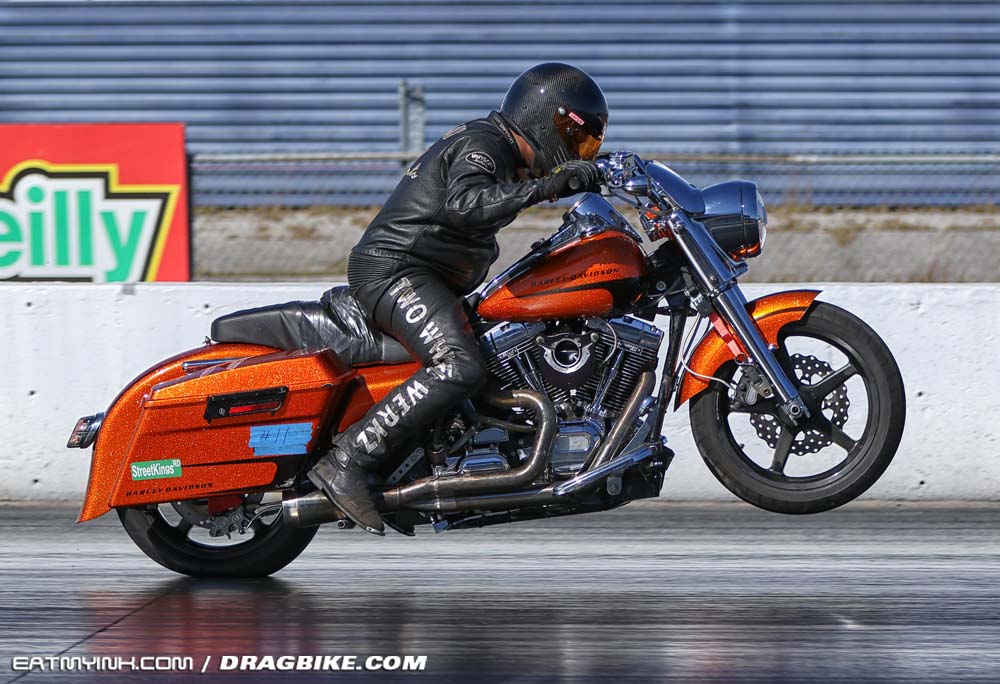 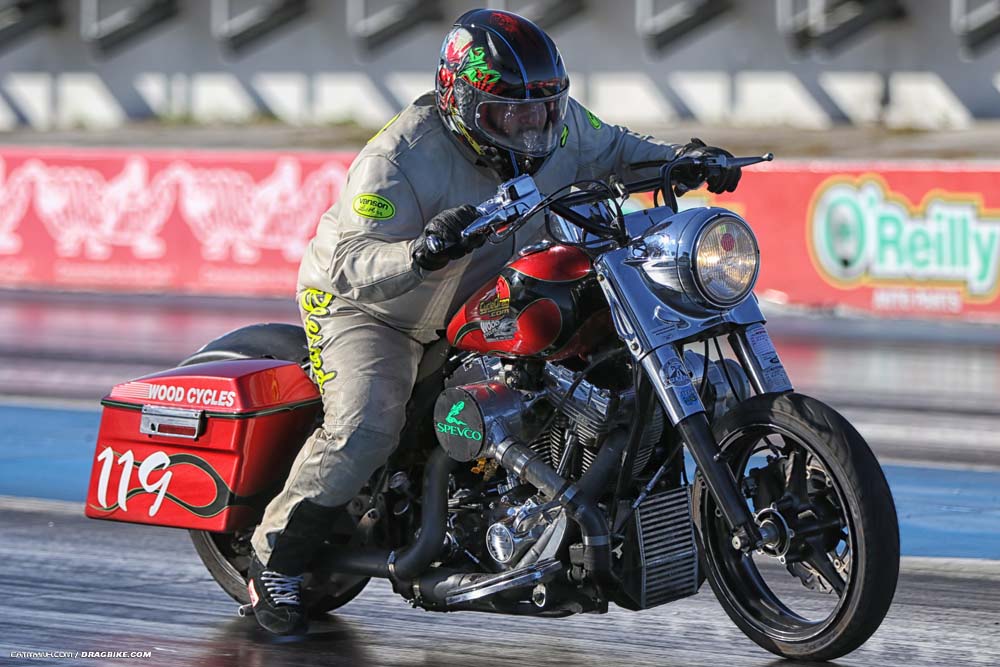 Tennessee plumber Shane Pendergrast will be defending the Zippers Performance Pro Modified title on his Buell dragbike. Also expect to see NHRA Pro Stock Motorcycle racer—and recent upset round one winner over champion Matt Smith at the Gatornationals—Lance Bonham, and many more in this high-performance gas-and-wheelie-bars class. 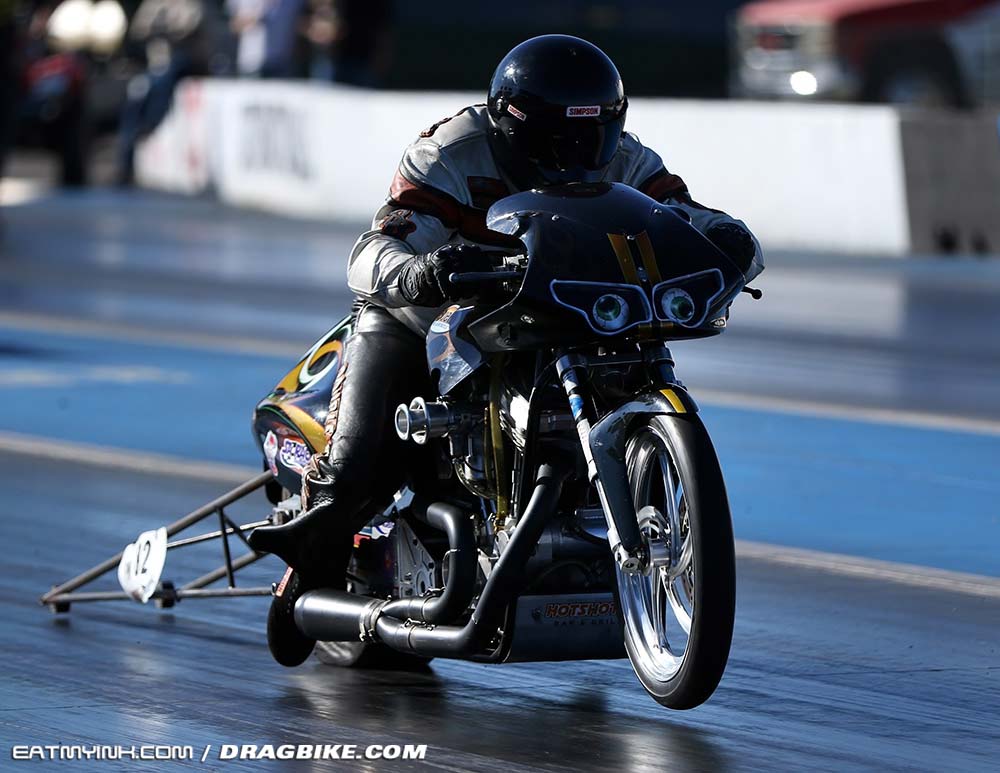 Pingel Pro Modified champion Gary Douglass will have a tough time against Jeff Workman and many more as he seeks to repeat. 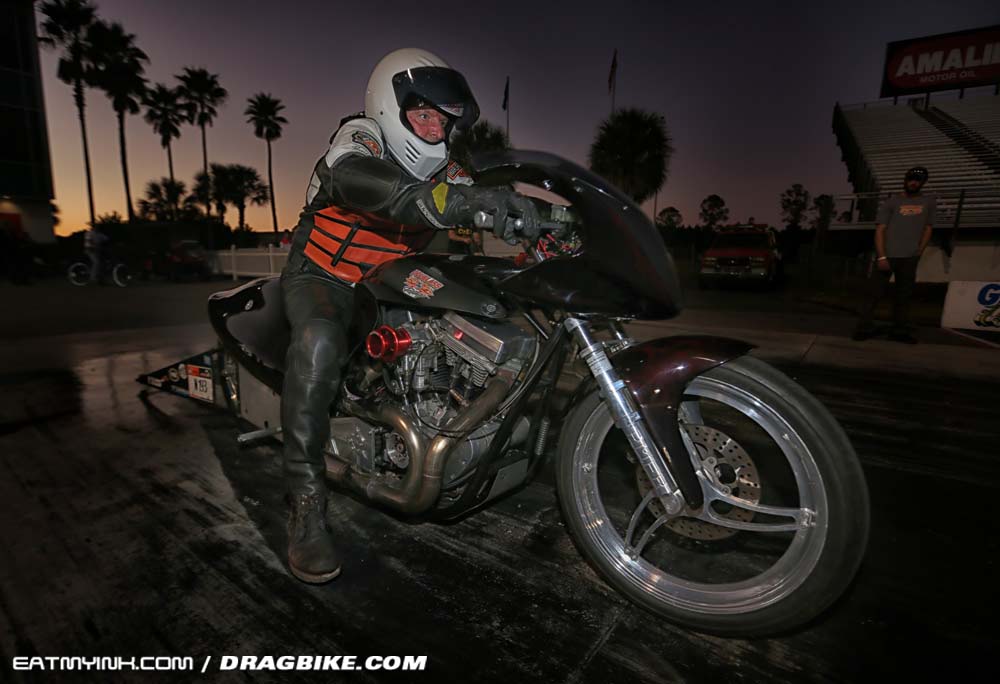 Index and bracket classes form the backbone of AHDRA and there are plenty to choose from. 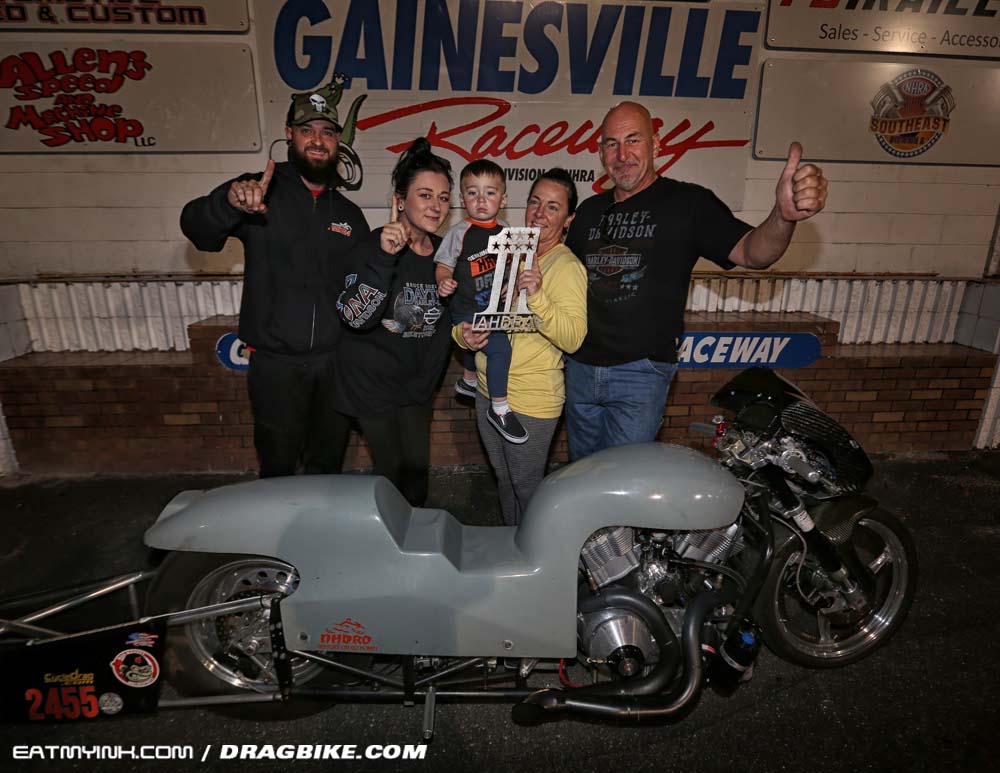 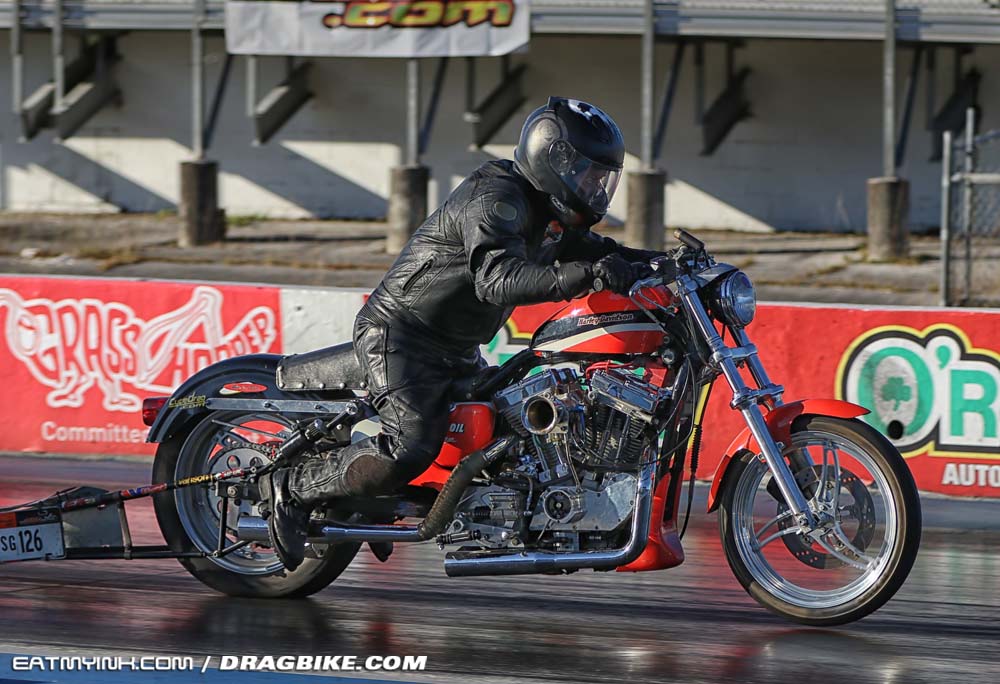 The Super Pro 10.30 championship is Nate Carnahan’s to retain or lose. He’ll have competition from Reiss, Gary “Busey” Burkley, and more. 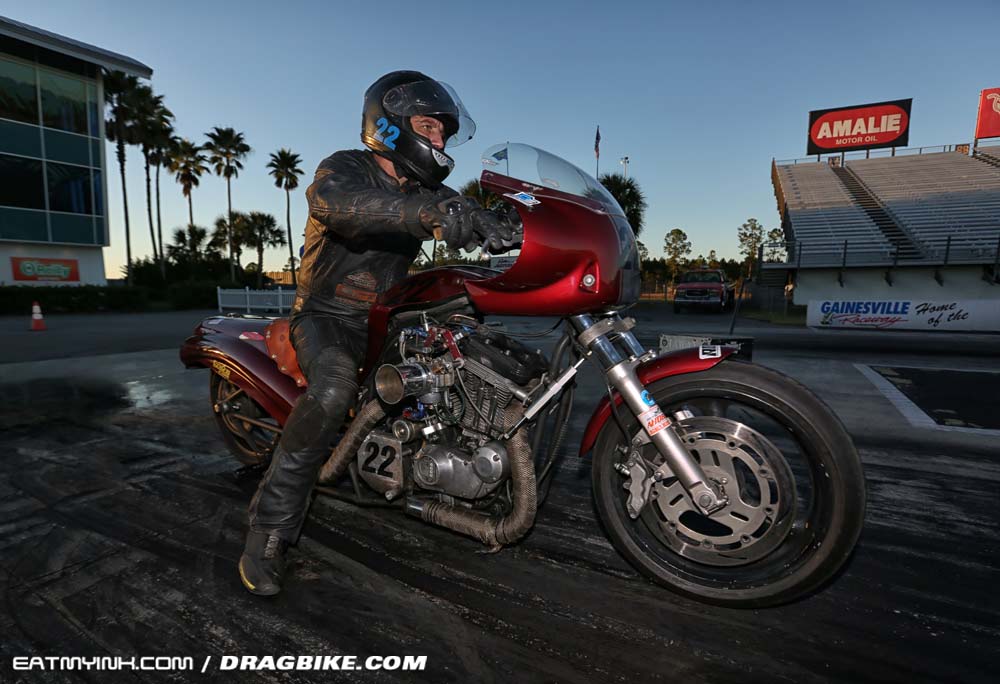 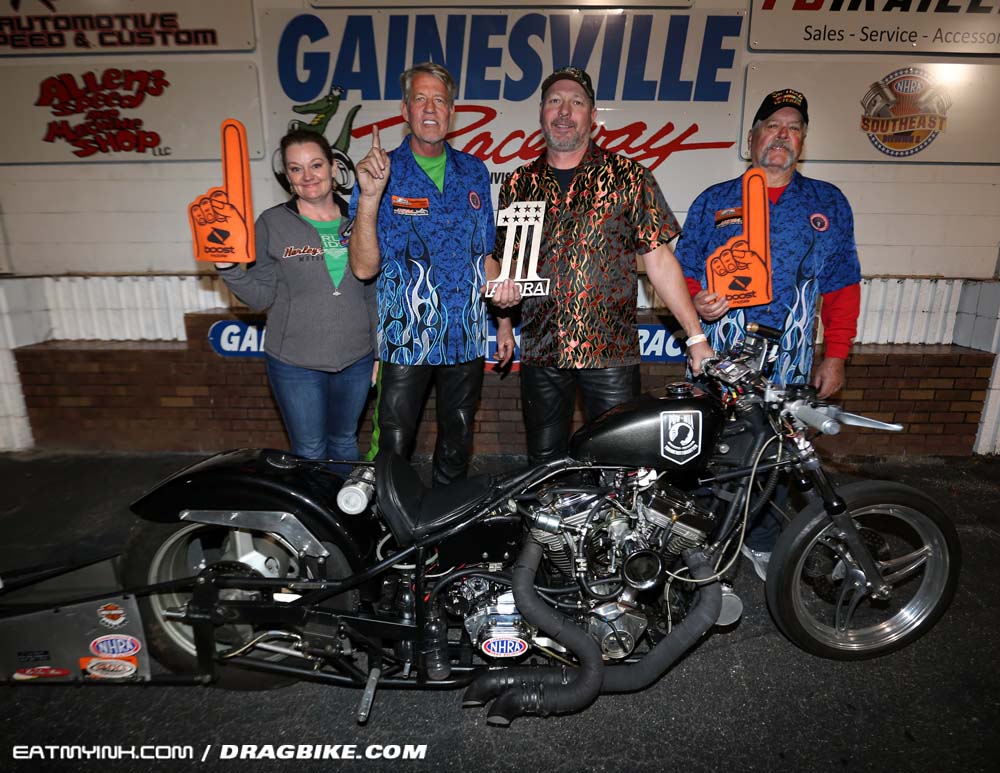 Instantly recognizable by his tall Mohawk, long goatee, and matching dog “Buell,” Tennessee plumber Loren Potter can also be recognized by the two number one plates on his motorcycle—for Universal Fleet & Tire 10.90 and Eliminator. 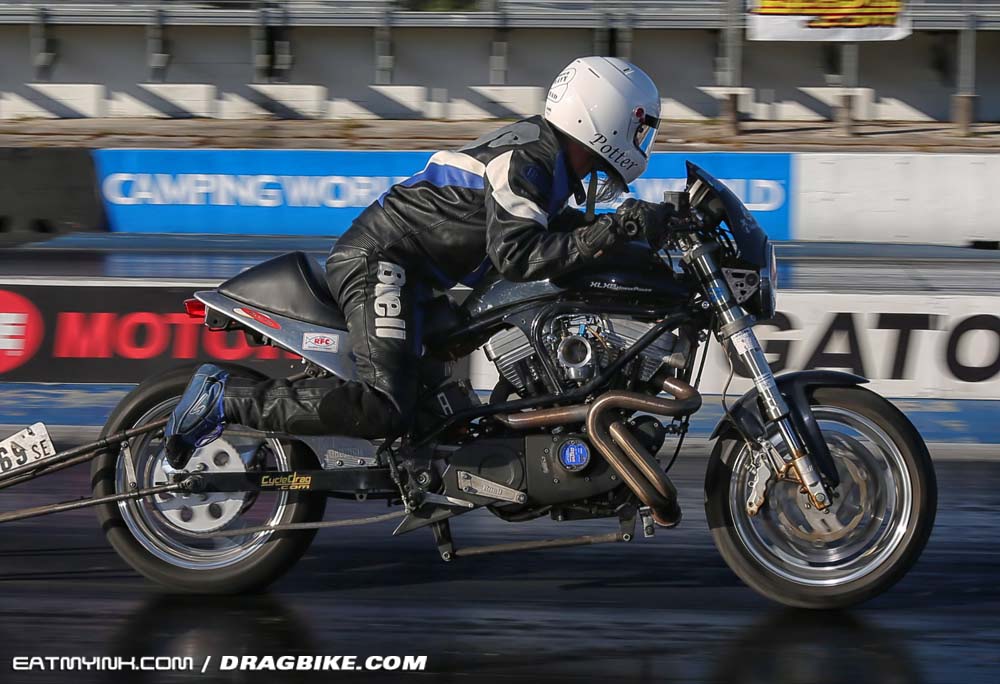 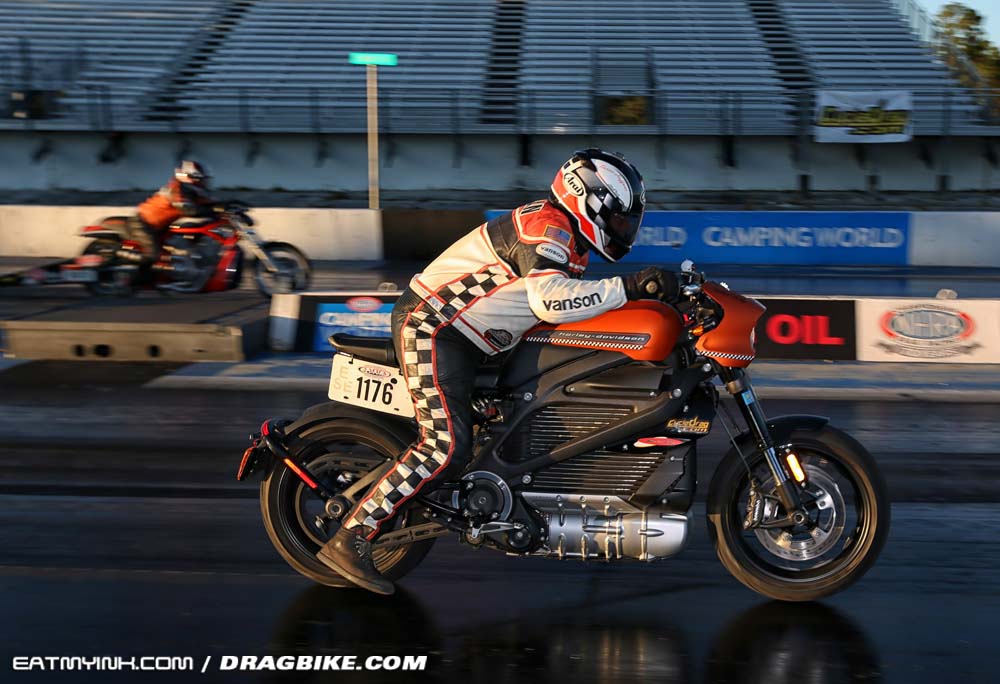 11.50 index champ Jason Leeper is one of those who’s made plans to take the nitro leap into Pro Fuel, while leaving much of his index racing to son Jordan—who’ll have to deal with challenges from Huffman and many others. 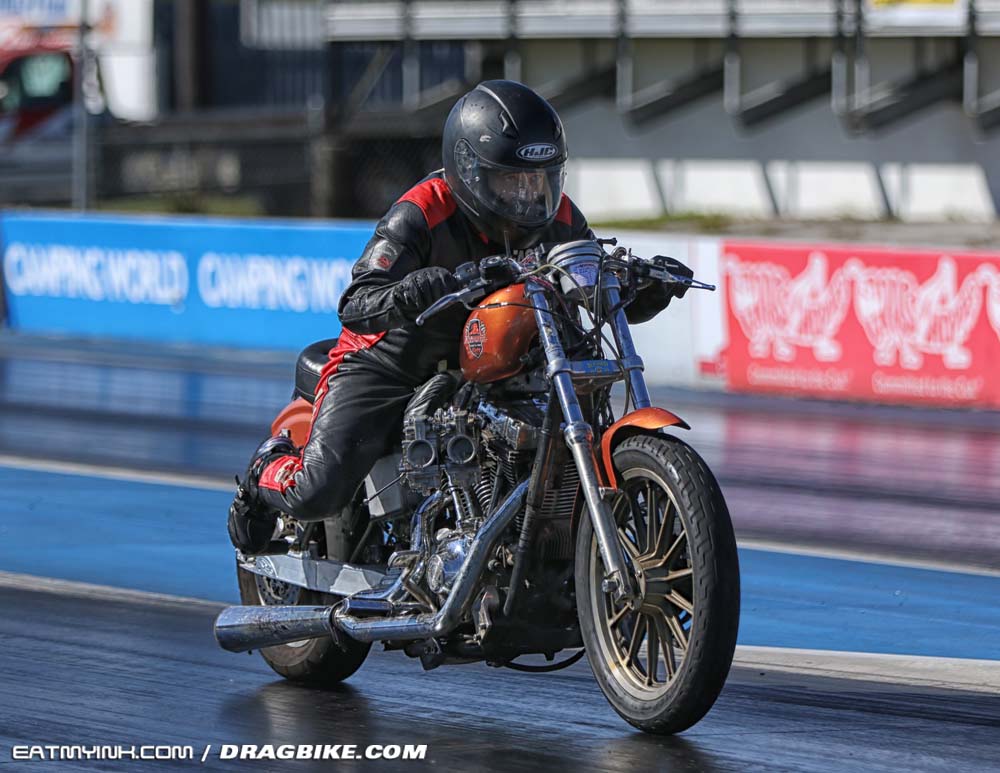 Daryl Coffin Motorsports Trophy is the perfect beginner’s class. Bring your safety equipment and race YOUR bike on the famous Gainesville quarter mile.

And one more thing—wait for it—the return of Jr. Dragbike later this season!

The off-season is over and it’s time to race! Friday night will see a special memorial celebration of the life of D.J. at the track, complete with a BBQ sponsored by Johnny Mancuso and Mancuso H-D, and live music by the Local Traffic Band. If you know anything about D.J., you know he’d want you there and telling stories about him and his dirty jokes.

Bill Rowe and his family welcome the whole AHDRA community of racers and fans back for a fast and fearless 2022 season. This one will be remembered forever and you will not want to miss it!