ADHRA HEADS TO LAS VEGAS FOR THE FINAL SHOW OF 2002 WITH CHAMPONSHIPS AT STAKE AND THE LARGEST PURSE IN AHDRA HISTORY AT THE JIMS LAS VEGAS NATIONALS PRESENTED BY LAS VEGAS HARLEY-DAVIDSON!

The stakes are high as the AHDRA prepares for the final event on the AHDRA 2002 National Points Tour, October 19th & 20th. The Strip at Las Vegas Motor Speedway will be the place to witness tire smoking, fire breathing 200 mile-per-hour nitro burning Harleys conquering the quarter mile. 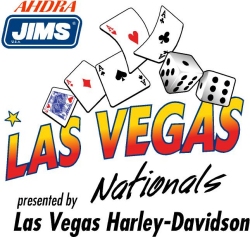 On Friday, October 18th, JIMS USA is back with the Annual JIMS Rolling Bones Party at the Harley-Davidson Café. AHDRA race bikes will be on display and ready to fire up right on the strip! The fun starts at 8pm.

Saturday, the Screamin’ Eagle High Stakes Shoot-Out leads off the racing action at high noon. Harley riders, meeting AHDRA requirements can enter for a chance at the $15,000 purse. The lucky winner will take home a cool, $12,000 cash, and runner-up takes $3,000. Interested participants should call the AHDRA office to register or sign up on site, no later than 9am Saturday morning.

Racers take the track at 3pm for qualifying at the JIMS Las Vegas Nationals presented by Las Vegas Harley-Davidson as racers from the East and west compete for a spot in Sunday’s eliminations.

Friday, Gates open at 2pm, for test and tune beginning at 4pm. Saturday and Sunday, gates open at 8am, racing starts at Noon.

Admission to the JIMS Las Vegas Nationals presented by Las Vegas Harley-Davidson is $35 for the weekend and one -day passes are $25. H.O.G. members receive a $5 discount at the gate and children under 12 are admitted free.