“This class was created in response to the tremendous growth and popularity of cruiser motorcycles in the U.S,” said AMA/Prostar’s President Keith Kizer. “This is virtually an untapped market and we know owners of this class of motorcycle are anxious to go racing. Further enticement will come from Yamaha contingencies posted at each event, including a final year-end championship payout.”

“The 98 cubic inch Road Star is the perfect platform for this class” said motorcycle product manager Derek Brooks. “The fact that it’s air-cooled, push rod, and features a belt final drive system make performance modifications simple. We’re also excited that AMA/ProStar took this initiative and are proud to be the presenting sponsor.”

The 2001 racing season kicks off on the weekend of March 2, in Gainesville, Florida with an eight race series. 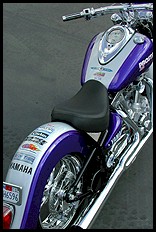