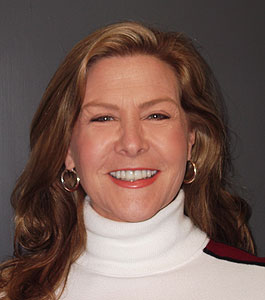 Carrie Seifert Tate a.k.a. “The AMAZON” went to the Winner’s Circle at the AHDRA Jim McClure Nitro Nationals in Rockingham, NC, October 14, 2012. She is currently Number 2 in the AHDRA Pro Drag Nitro Harley Class points. After this weekend she is within striking distance of Steve Pier with Bad Apple Racing with only 13 points separating the two. The championship will be decided at the Cajun Nitro Nationals in Belle Rose, LA, October 28th. With a huge smile Carrie says, “This is an awesome opportunity for us to win the AHDRA Championship! We knew we had to win this event and Steve had to go out early or we wouldn’t have had a chance with only one race remaining in the series this year. We’re stoked!”

“Saturday morning started with a disappointing first qualifying pass of 8.013 at 156.6 mph, said husband and Crew Chief, Kerry Tate. “With 10 teams trying to get into the 8- bike field we weren’t even in the show at this point. Our luck got worse in the second qualifying pass. We banged the motor and broke the chain. After returning to the pits we discovered the motor was unhurt. We replaced the chain and thought we were good to go. We started the bike it just quit”, said Mr. Kerry. “About that time they were calling Pro Drag to the staging lanes and we thought we were finished. Then we heard there was a delay due to oil on the track. We took advantage of this break in the action to try and find the problem.” Tate continues, “Johnny Vickers, our bike builder, heard we were in trouble and rushed over to help diagnose the problem. After installing a new ignition module we got to the staging lanes just in time for round three. We ran an unimpressive 7.73 @ 159.01, but it was good enough to bump two riders and qualify in the number 8 spot.”

The Amazon was up against the No. 1 qualifier, Steve Pier, in the quarter-finals. The only chance at winning the championship was this race. They tear down the track and the win light illuminates on Pier’s side after he ran a 7.43 @ 166.9 to Seifert Tate’s 7.811 @ 158.6. But wait! Within a couple of minutes Stevie in the tower announced that Pier had crossed the centerline and was disqualified. The Amazon was advancing to the next round!

Amazon Racing is up against Rich Vreeland of Vreeland’s Harley-Davidson Racing. The smoke cleared from the burnouts and they’re staged. The pressure is on. The Amazon gained a little edge over Vreeland with a .124 light to his .131. “I got Rich off the line, but he was out-pulling me up to the 1/8th mile. Then Brutus started coming on strong and we got past him by about a foot at the finish line. We ran a 7.46 and Rich ran a 7.47. Talk about a drag race! The Vreelands are a tough team to beat and great competitors. We are looking very forward to racing in Louisiana! We intend to bring home the AHDRA Championship”, said Seifert Tate. 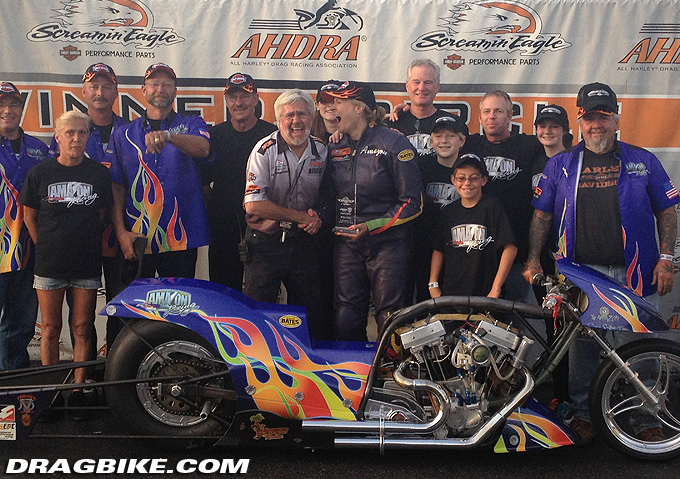 We appreciate our sponsors: Hawaya Racing, Bates Custom Leathers, Engineered Performance Tooling, Beene’s Baggers, Conway Collision and Superior Interiors. Thanks to Johnny Vickers of Hawaya Racing for sharing his wisdom and technical support between races. Thanks to Leanne Purvis for keeping the faith. Thanks to Billy Jackson for helping us in the pits between rounds. We also want to thank Rich, Ray and Patty Vreeland of Vreeland’s Harley-Davidson for sponsoring this race. We thank the passionate Harley drag racing fans who come out and support our wonderful sport.

For more information go to www.amazondragracing.com