During the first round of Top Fuel eliminations, Tii Tharpe turned in a straight as a string 6.37, while Tyler Wilson suffered problems and was a no-go. Tracy Kile and Armon Furr had a great drag race to half-track, then Tracy Kile just pulled away on the Bad Apple Racing bike, winning the round with a 6.54 @ 215 to Armon’s slowing 7.0 effort. When Randall Andras and Robert Stewart lined up, Randall was off the line first and he stayed there, as Stewart’s bike faltered and slowed. During the Kerrigan – Perry match up, a problem developed after Tim Kerrigan’s burn out and they had to shut the bike off. Ryan Peery then thundered off to a 6.18 elapsed time and he will face Randall Andras, next round. Tii Tharpe will square off against Tracy Kile. 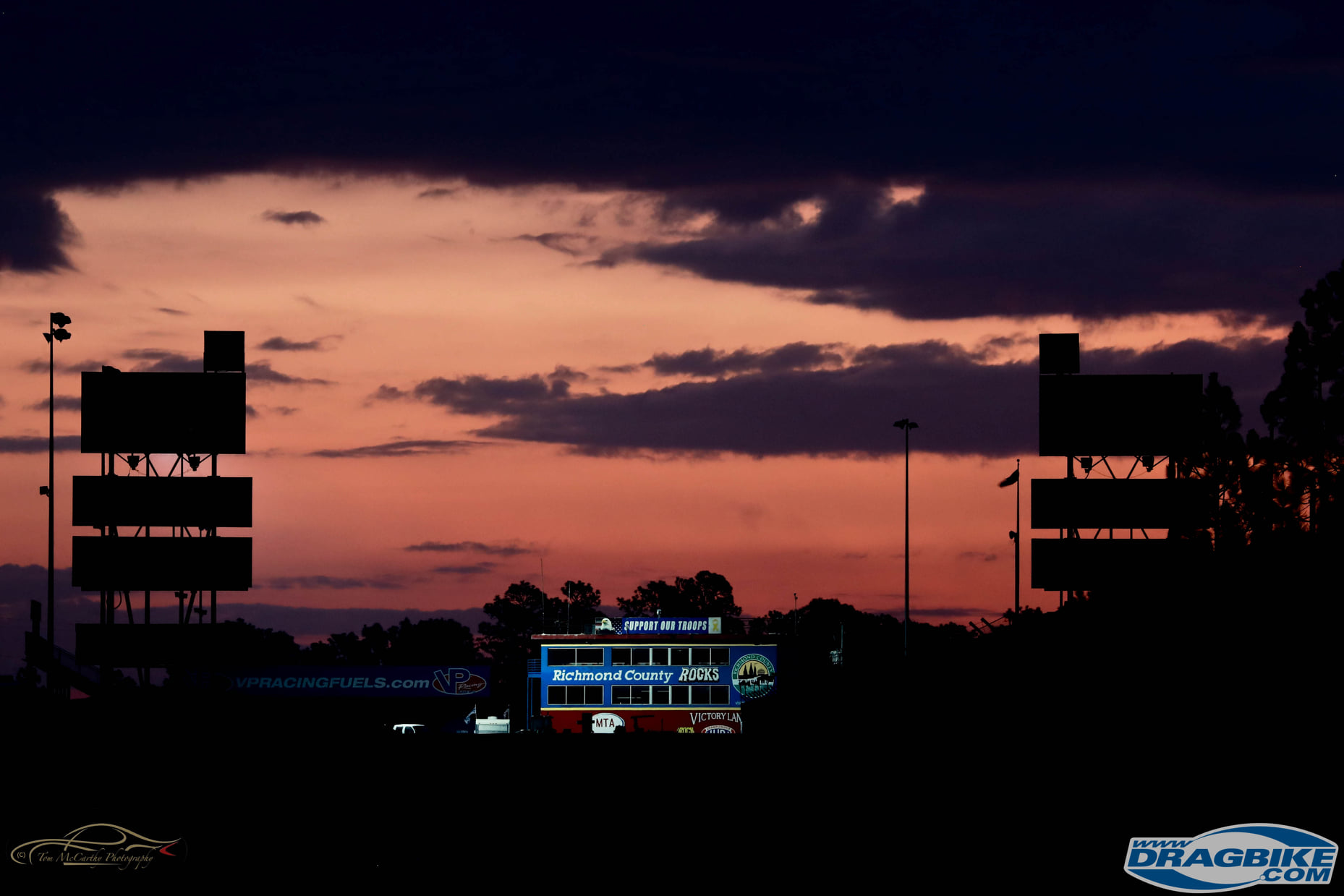 In Nitro Funny Bike (NFB), Chris Smith started things off with a bye, run and then Jimmy Doyle had a competition solo as Sam White was not able to make the round with his NFB. Tadashi Saitou made quick work of Michael Balch, 6.93 to 9.32. And to close out the round, Keith Brown was set to have a great drag race with Rocky Jackson, but the Browne Racing Turbo bike stumbled shortly after launch and The Rock Stone ran off to get ready to meet Reggie (Tadashi Saitou) in E-2. Chris Smith will face Jimmy Doyle. 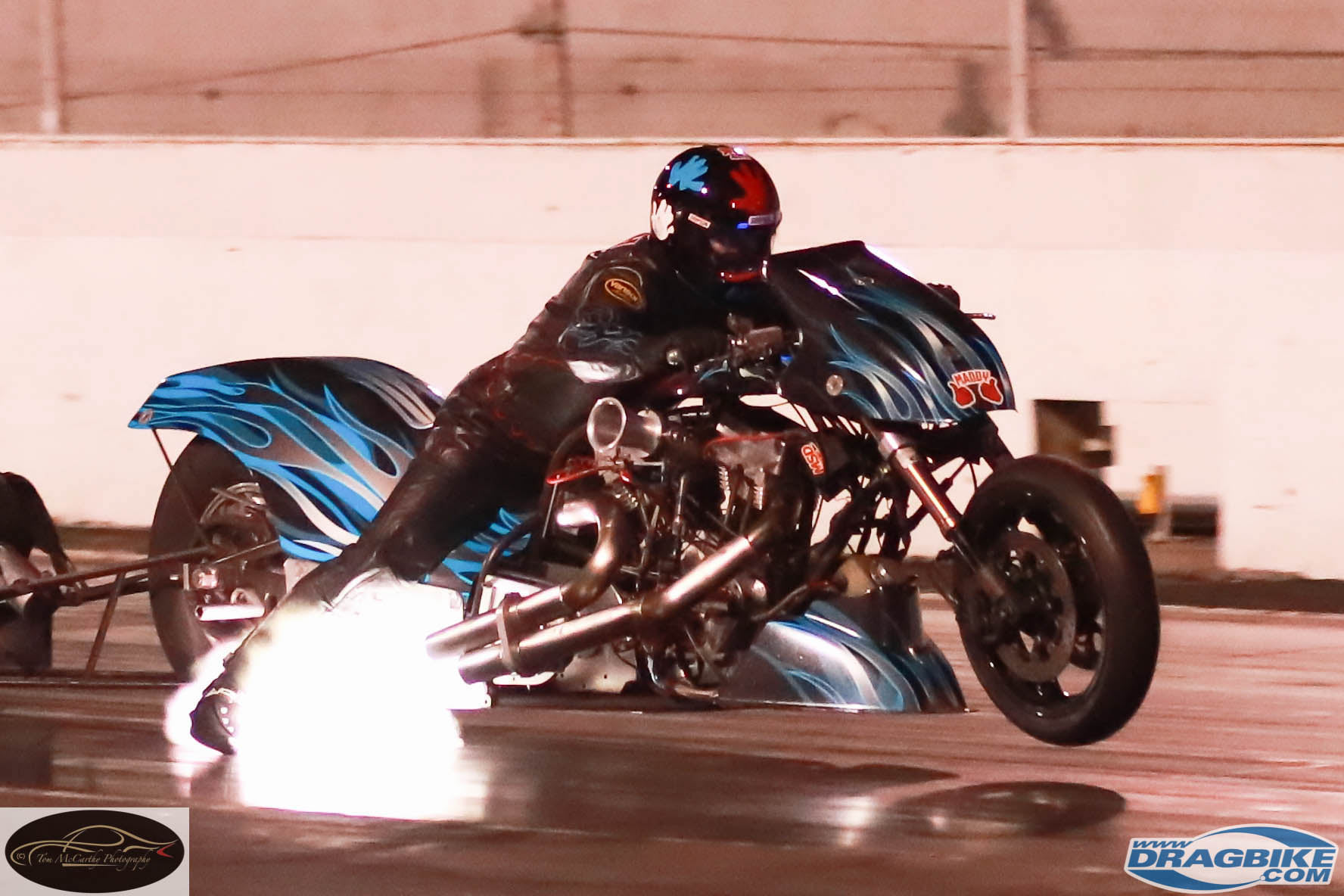 In the Pro Fuel class: Sam White, the #1 qualifier was ready to match performance with the always tough, Tyler Wilson, but Tyler developed a problem shortly after fire up and Sam made a solo pass, posting a 7.72 @ 166. Jay Beasley and Jay Urban were ready to go next, but Mr. Urban’s beautiful blue bike was backed out of the water box and Mr. Beasley traveled A to B under power and he will face Sam White next round. Jim Martin then performed a competition solo as Mr. Greenwalt was not able to compete. In the final pair of the round, Preston Bartlett got out quickly on Kersten Heling and when she lifted, Preston thundered off to t 7.60 elapsed time. Preston will duke it out with Jim Martin during E-2. 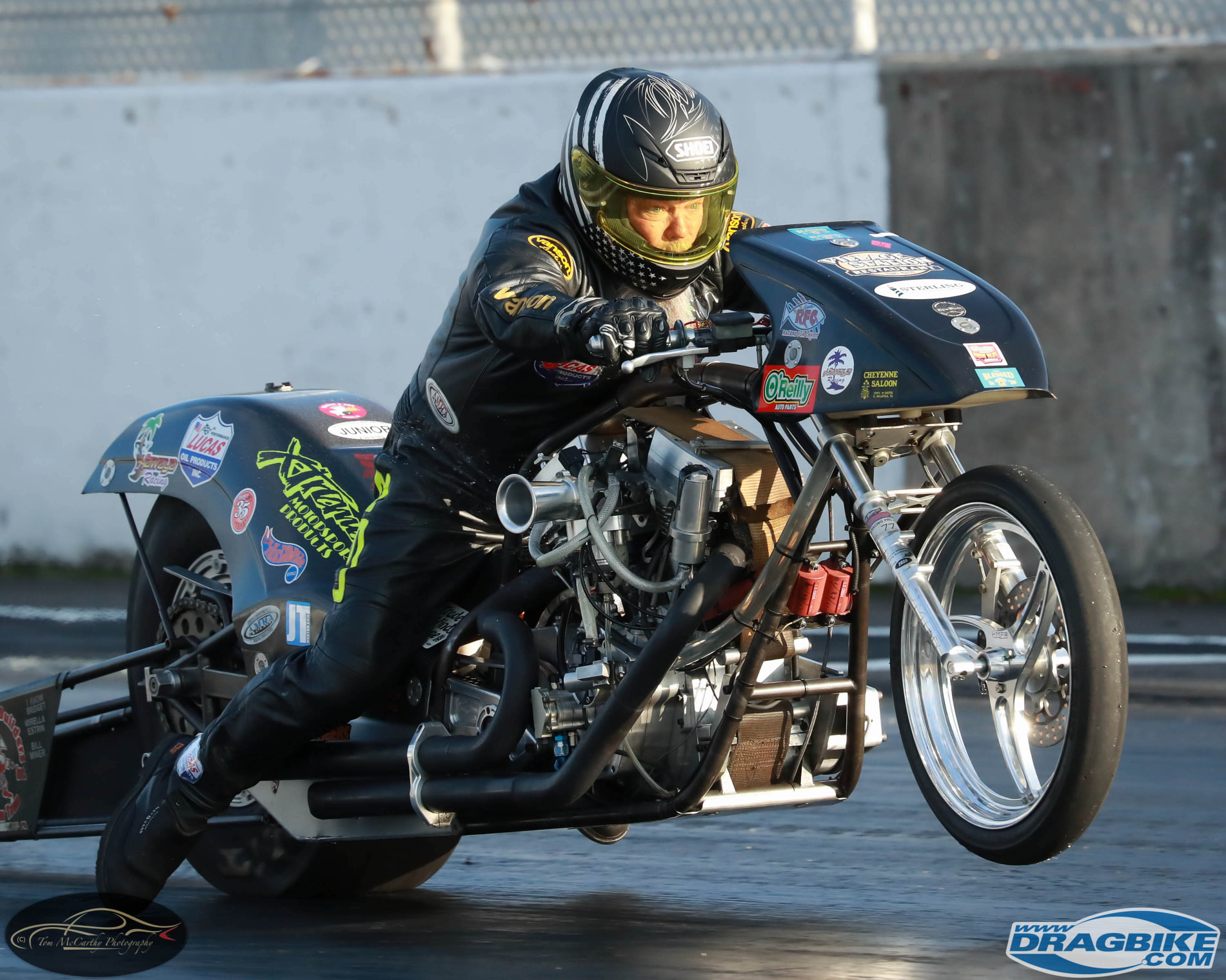 AMRA Pro Mod action: Billy Doherty posted a solo 8.34 to start off the round, J. Price defeated R. Boone, F. Frazier defeated Mr. Douglas. Frazier Vs J. Price next round and Billy Doherty will solo into the final round.

Top Fuel motorcycles led the way for E-2 at close to 1PM, EST, Tii Tharpe and Tracy Kile came out swinging! T.K. leapt off the line first with a .086 RT followed closely by Tii, who countered with a .105 reaction to the tree. They looked close in a classic Top Fuel bike battle down the track glued near side-by-side. Only the score boards could tell us on the starting line area who won. And it was Tii, with a 6.39 to Tracy’s 6.50. Considering Tii was the #1 qualifier with a 6.287, followed by his 6.37 in round one, his latest 6.395 makes for a mighty consistent Top Fuel motorcycle! 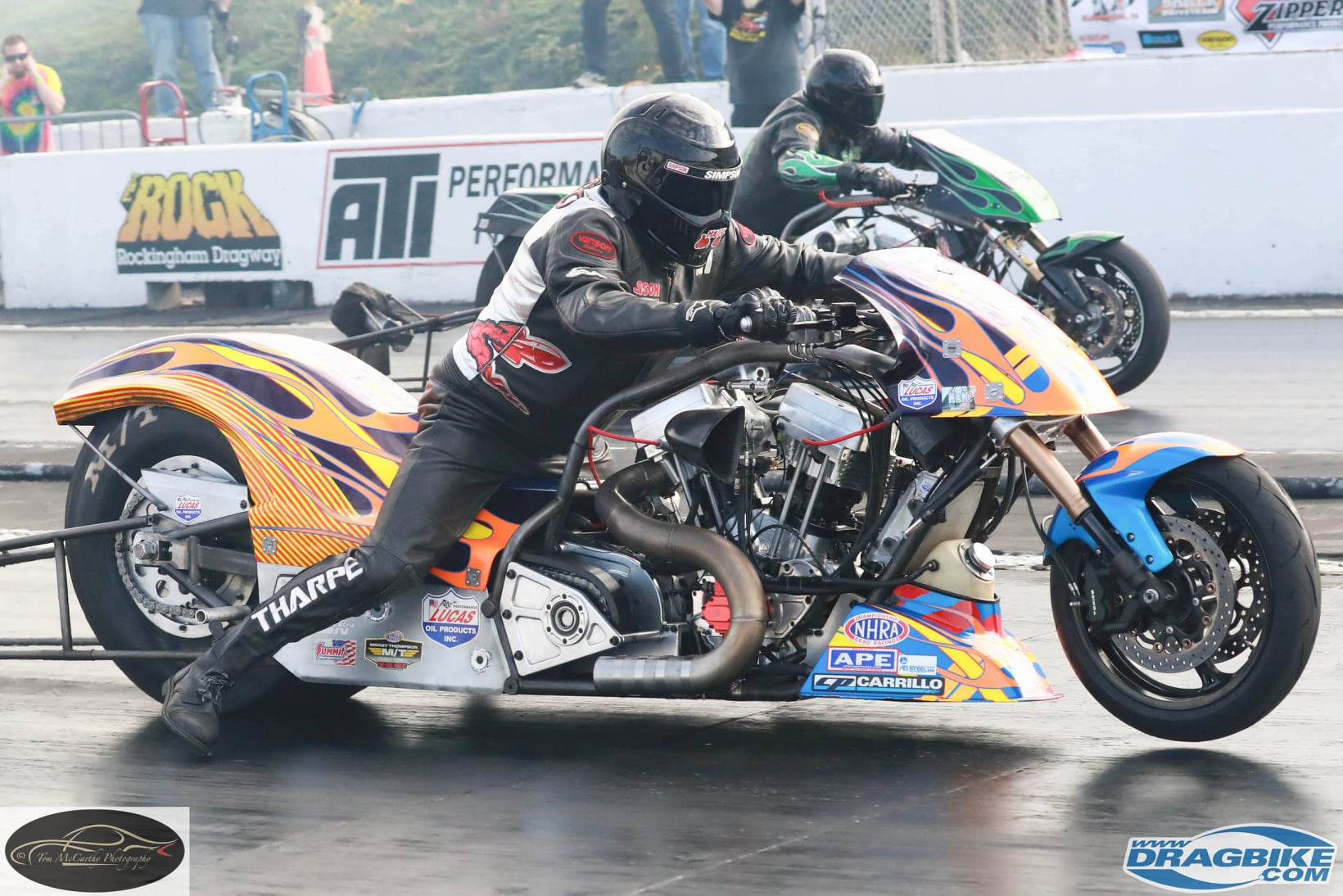 In the other E-2 pairing for T/F, Randall was ready for Ryan Peery, but his motorcycle was off pace with a 7.61 and Ryan thundered off with a 6.85 to earn the right to face Tii Tharpe in the last TFH race of the day.

In Pro Fuel, Sam White led the second round of eliminations with a solo as Jay Beasley could not make the run. Sam performed a 7.52 elapsed time. Then came the big match-up of the day for P/F with Jim Martin and Preston Bartlett both coming guns-out on this one. Jim wanted this one and was a little early on the tree with a -.179 RT, ending the match before it really began. However being the steadfast Nitro Pilot he is: Jim and Preston went wheel’s up, throttles to the stops, 7.98 by Jim and 7.55 for Preston.

The Final Rounds of Nitro Harley & Wrap up:

The last stanza of this race was one for the books. Top Fuel Harley was won by Tii “The Champ” Tharpe. His 6.49 ET was well ahead of contender Ryan Peery’s 7.98. Nitro Funny Bike was looking good for strong contender Tadashi Saitou for a storybook ending, but his last pass hurt the bike and he was not able to fire. Chris Smith soloed to the winner’s circle with a 6.92 pass. And to close out the nitro Harley’s, Preston Bartlett and Sam White went at it in the finals for the nitro bikes and they did indeed battle well. They were close to half-track, but Preston’s 7.53 was too much for Sam’s 7.61 as the two old nitro warriors did their class proud. 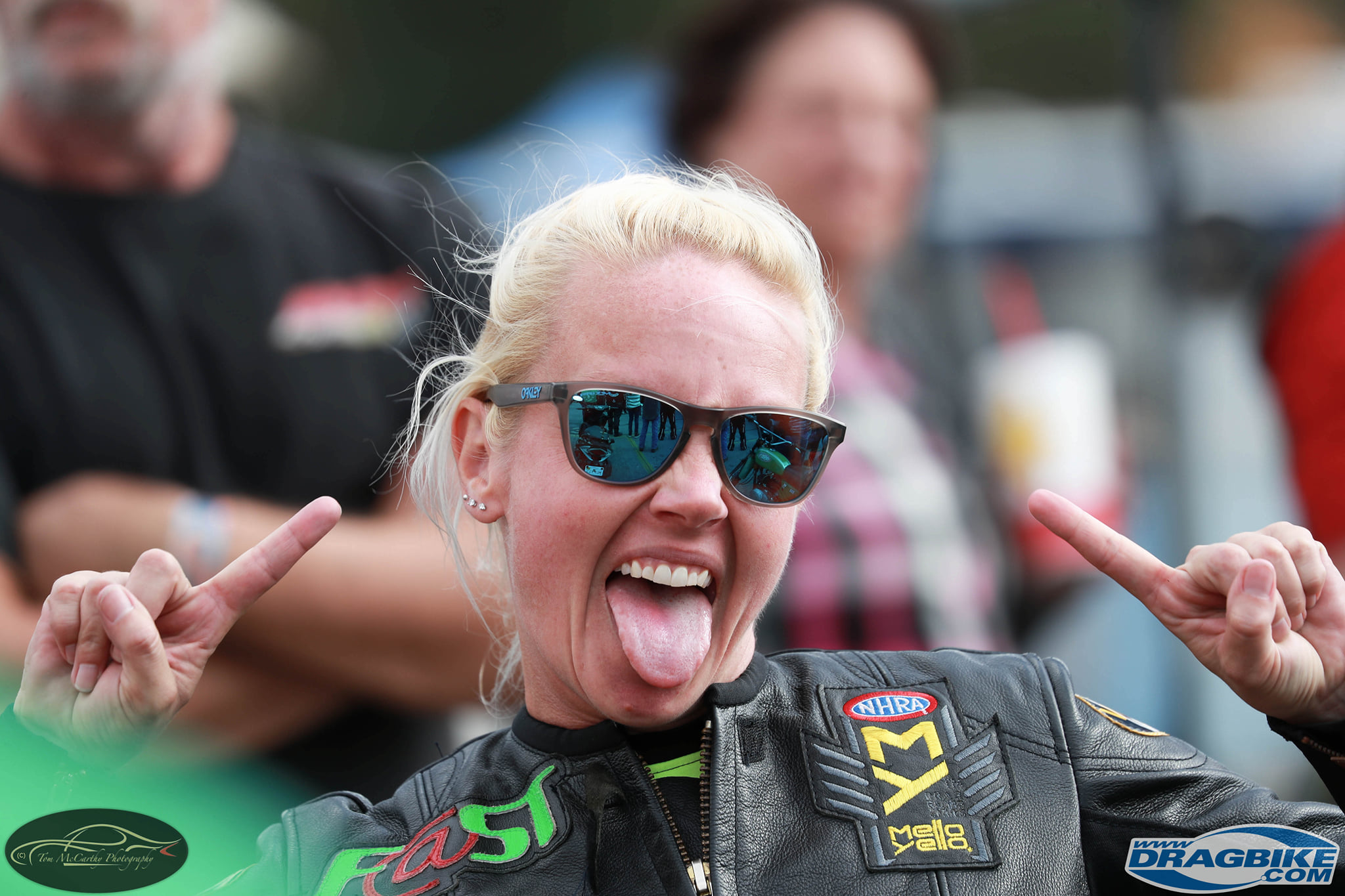 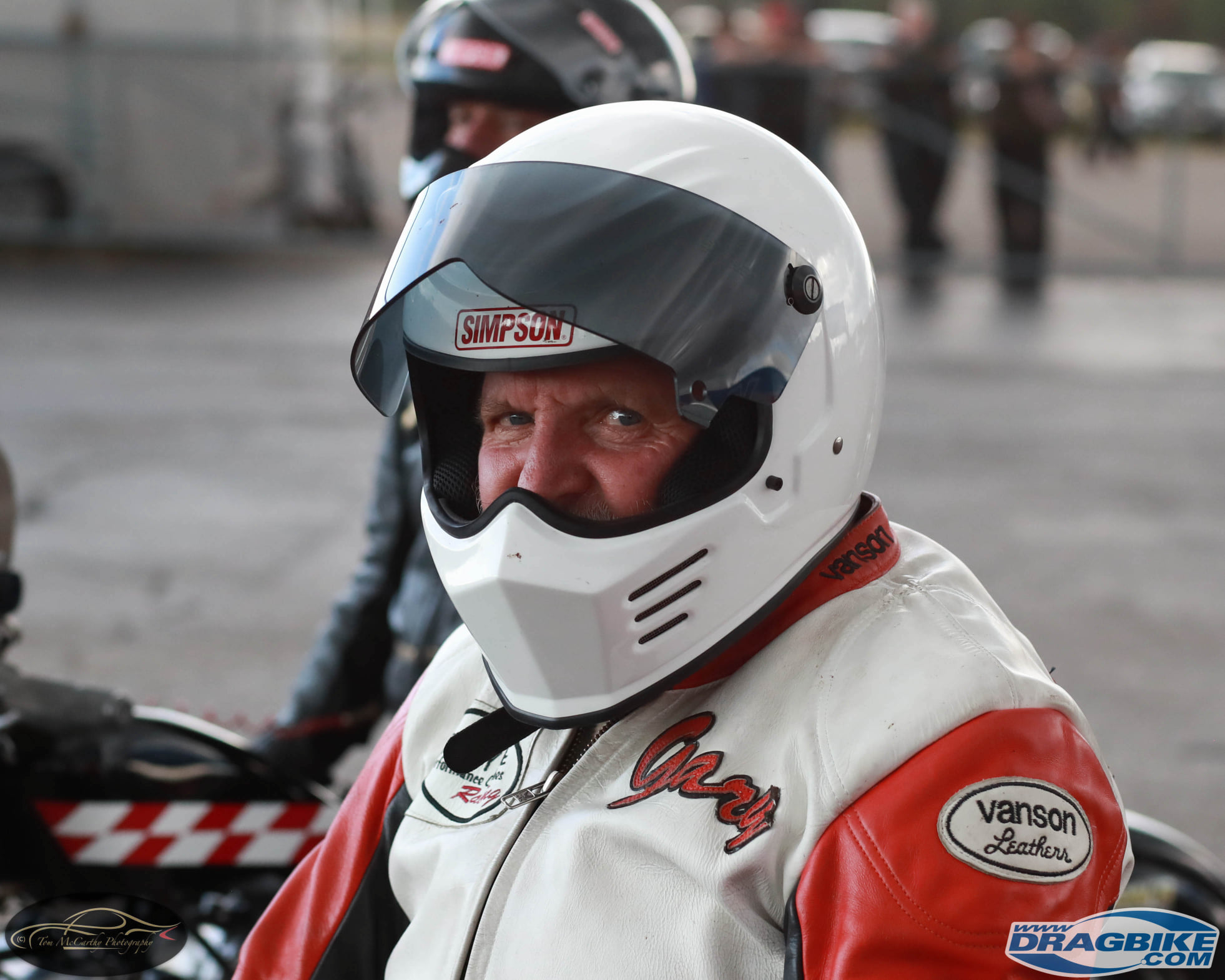 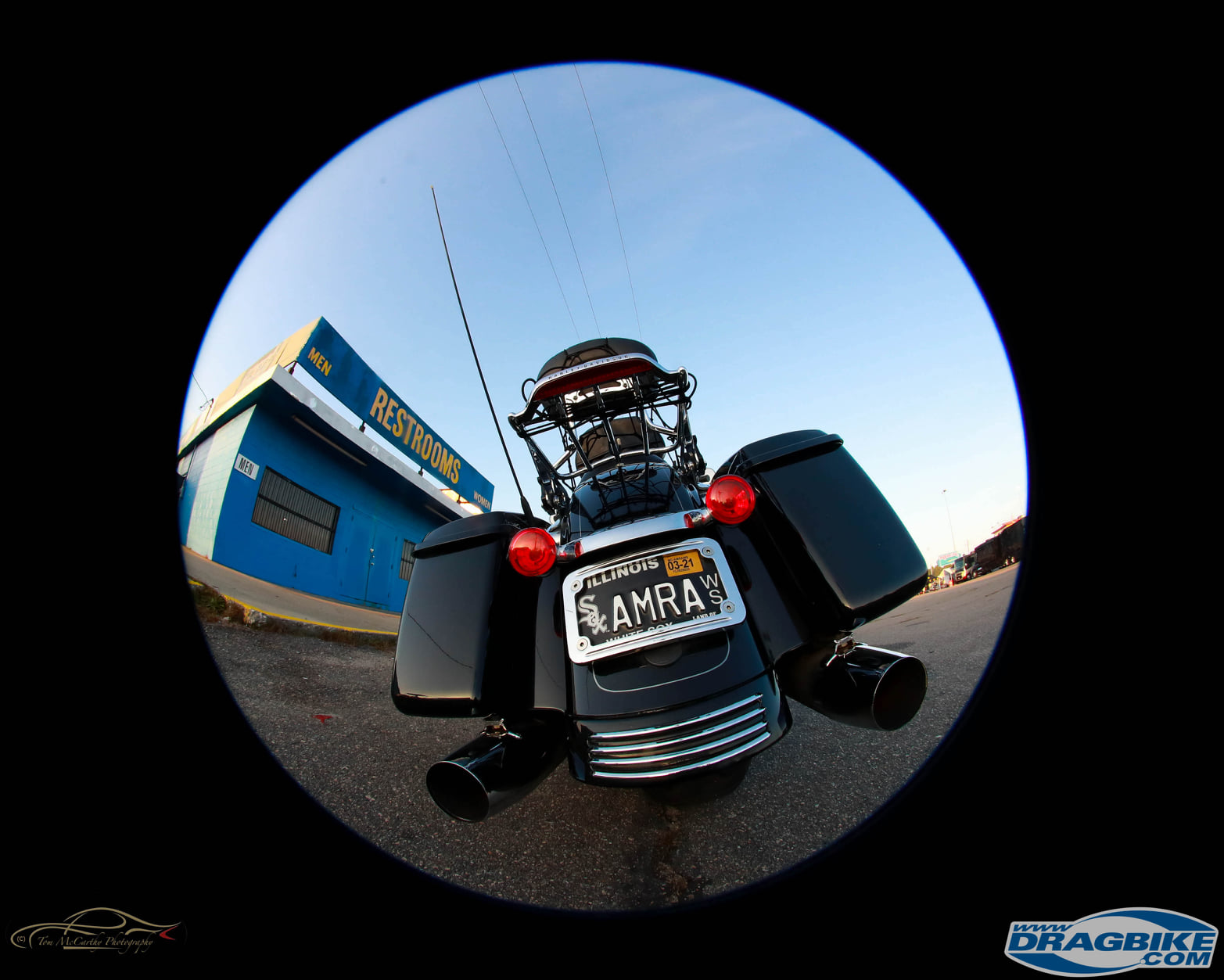 On Friday the 13th, 2020, Greg Baugh commented “If not for a missed email, this race might have turned out very differently than it will” he revealed to Dragbike.com, “I had an email early in the week and the weather projection was just ugly. But by the time I saw it on Wednesday, the weather pattern had improved dramatically and well, here we are.” Indeed the weather projections from Sunday through Tuesday were downright depressing for the Rockingham, Dragway area. But overnight, Tuesday into Wednesday, the whole weather pattern shifted and on Wednesday afternoon Greg said, “This race is a GO!” Who say’s Friday the 13th is bad luck?

So on Thursday afternoon, the AMRA motorcycle drag racing sanction trailer rolled into Rockingham Dragway’s staging lanes and was parked where it’s been parked for decades now and racers from across the USA began making their way to “The Rock” for the, 29th Annual AMRA, Jim McClure Top Fuel World Finals. Thursday was a check in as set up day only. Early birds like Jim Martin set up in the quiet afternoon and by dinner time, Jim was out with his clutch resurfacing grinder making sparks and enjoying a quite evening with friends as he prepared for Friday’s preliminaries.

On Friday morning the race-rigs began coming in, one right after the other and the pits began filling up quickly. This brought a big smile to the faces of Greg Baugh and Johnny Toth as AMRA was all set up ready to receive racers. Billy Weeks of Rockingham Dragway, under the watchful eye of Steve Earwood, was right in the thick of it all, directing the parking of the Top Fuel teams as a good turnout for this race is expected.

As for Friday’s test and tune session, it was your average T/T session with many racers doing test hits from various classes. The top fuel motorcycles of Tyler Wilson, Tim Kerrigan, made test hits for short duration. The Nitro Funny Bikes of Sam White, PTS Racing made hits and from the Pro Fuel ranks, Preston Bartlet lit the board up with a 7.58 @ 168. 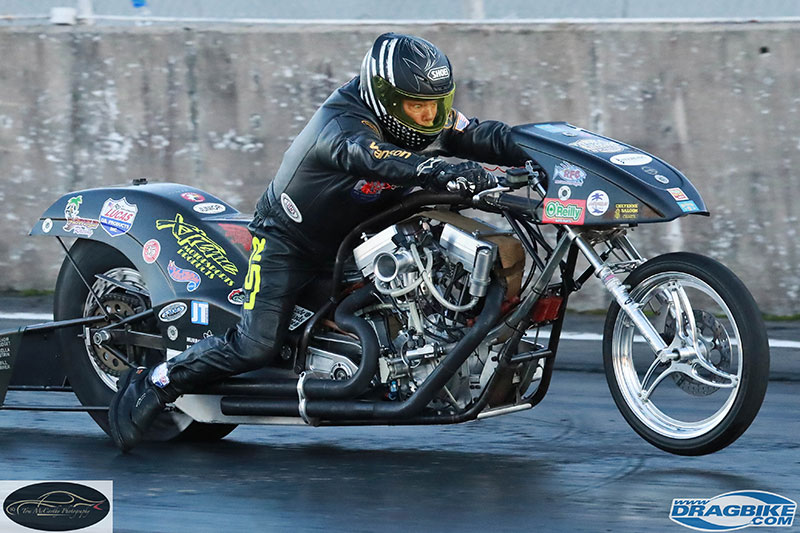 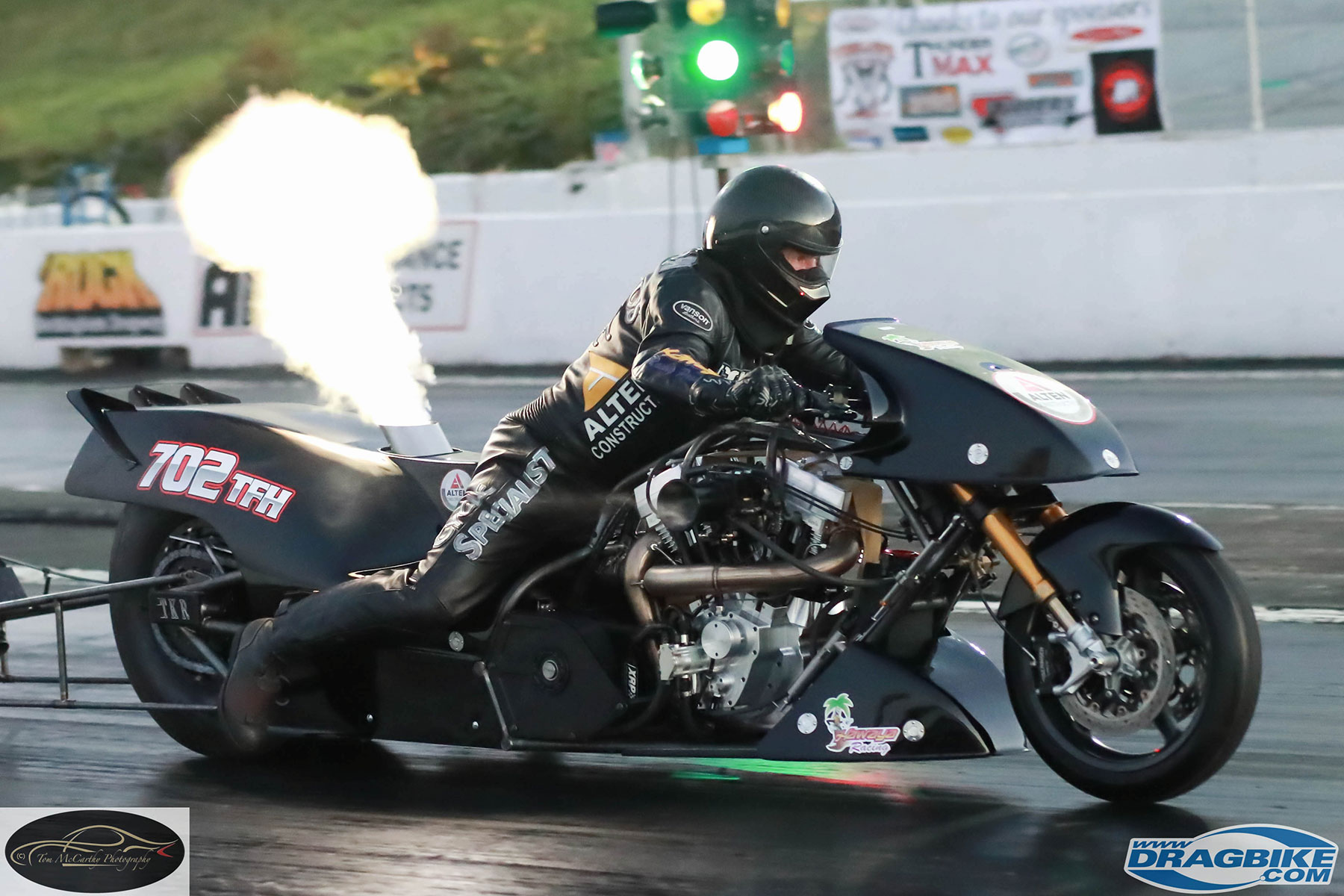 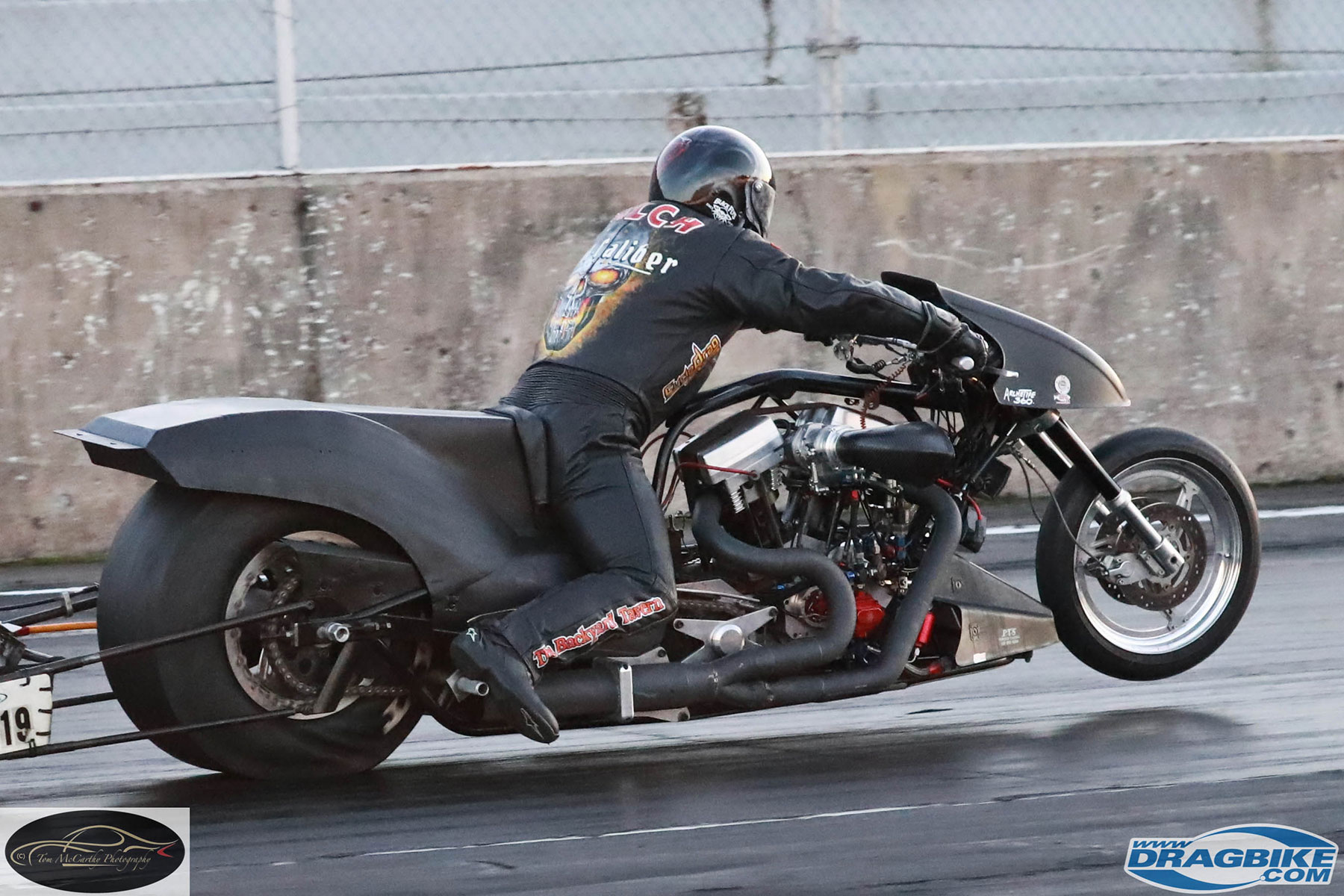 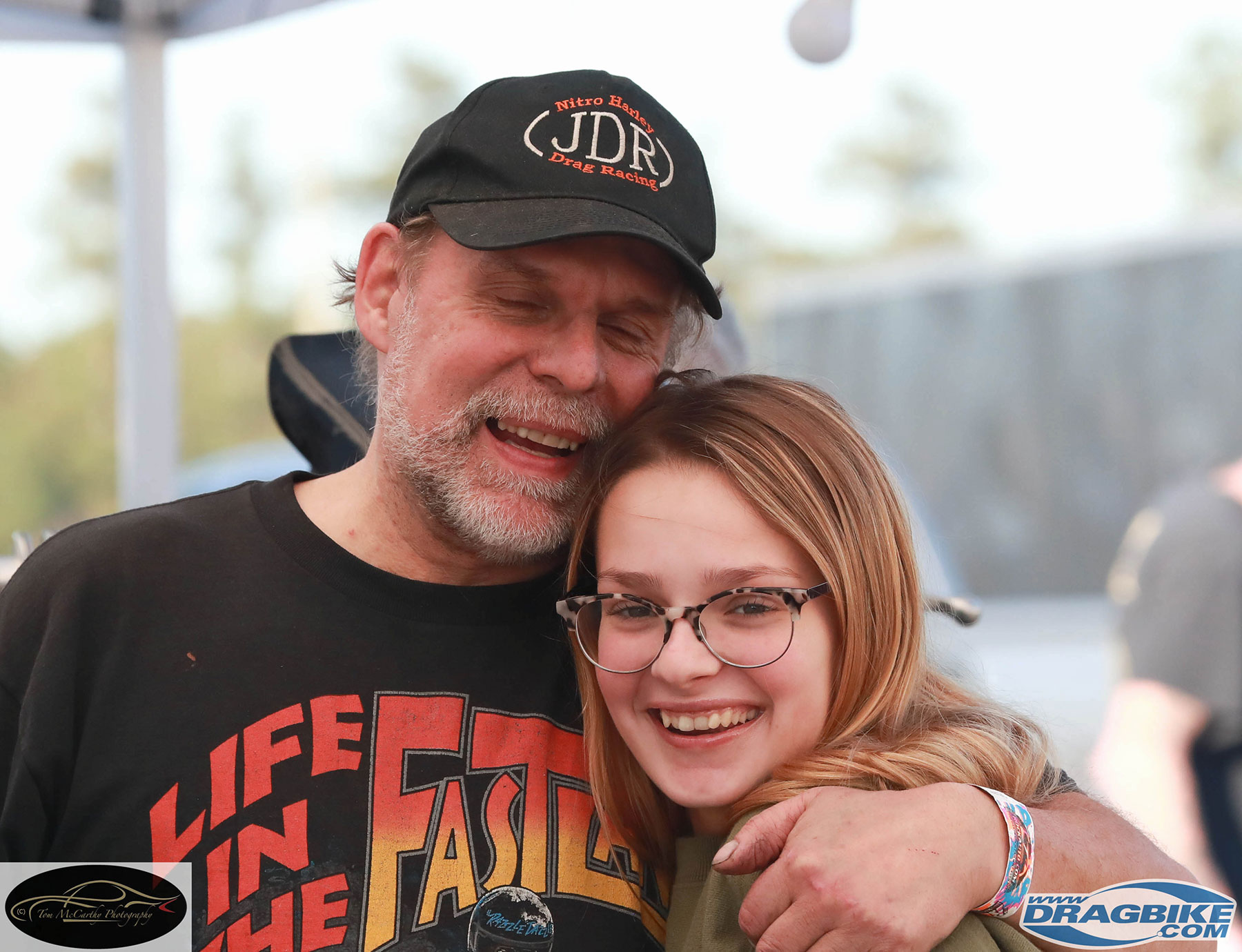 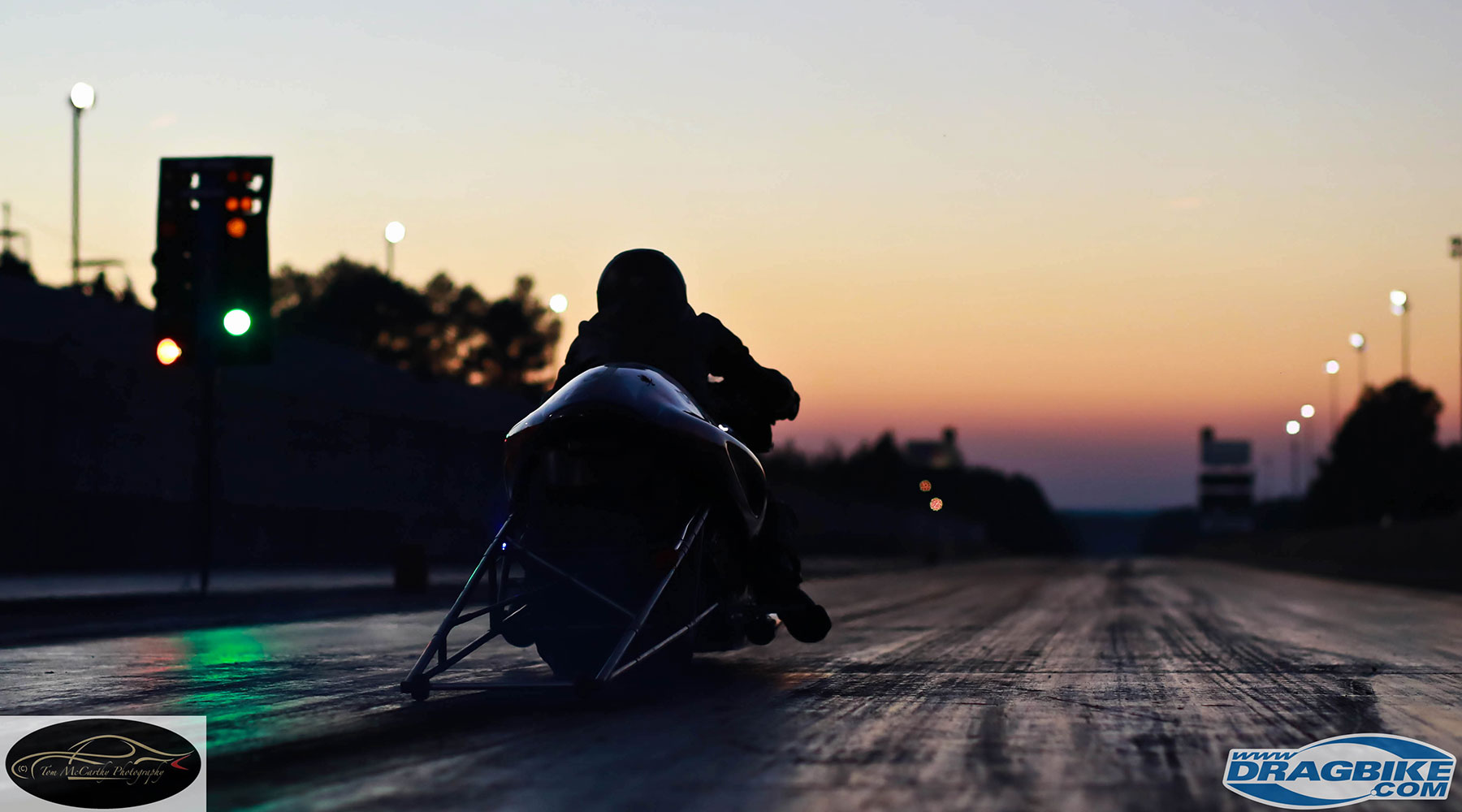 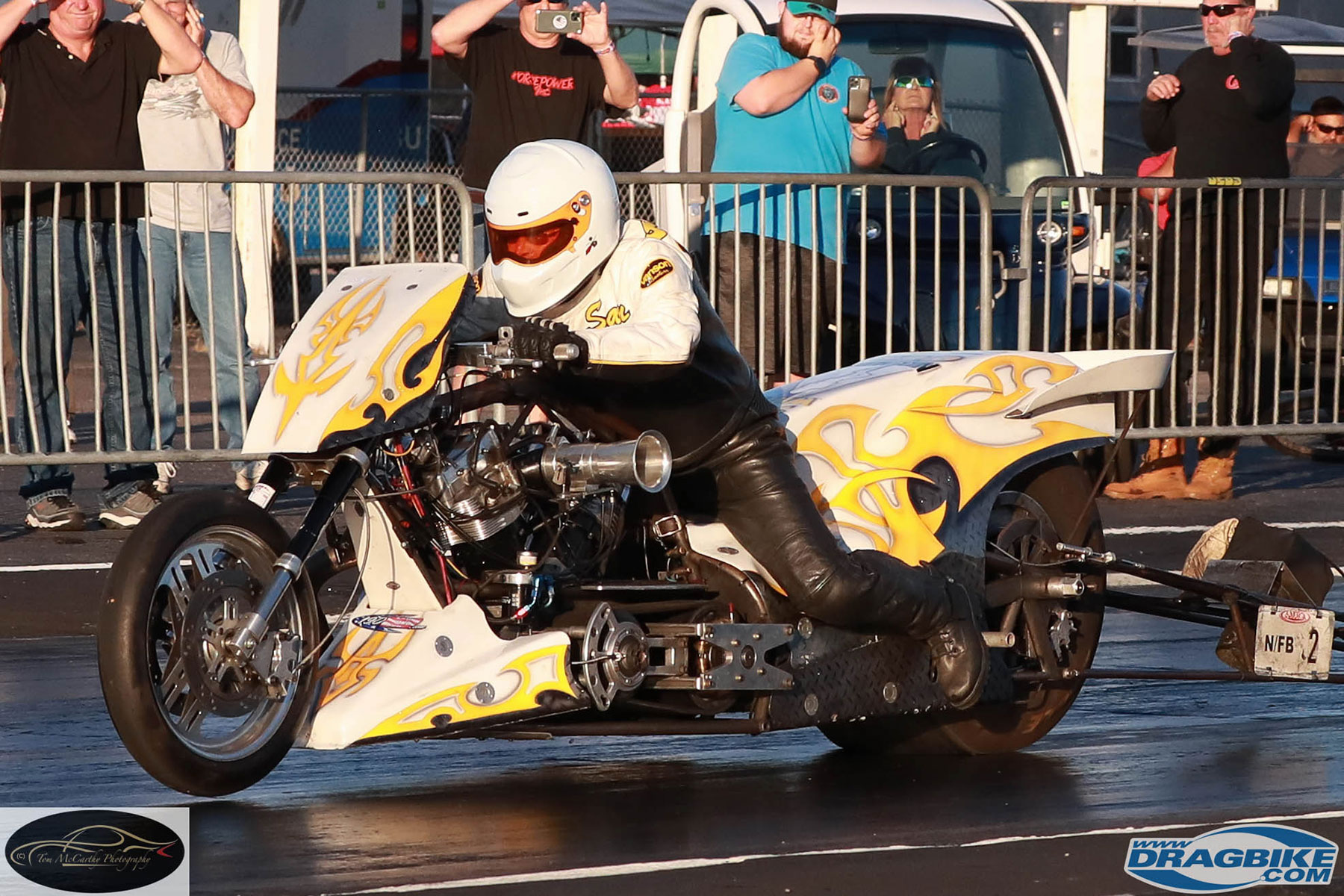 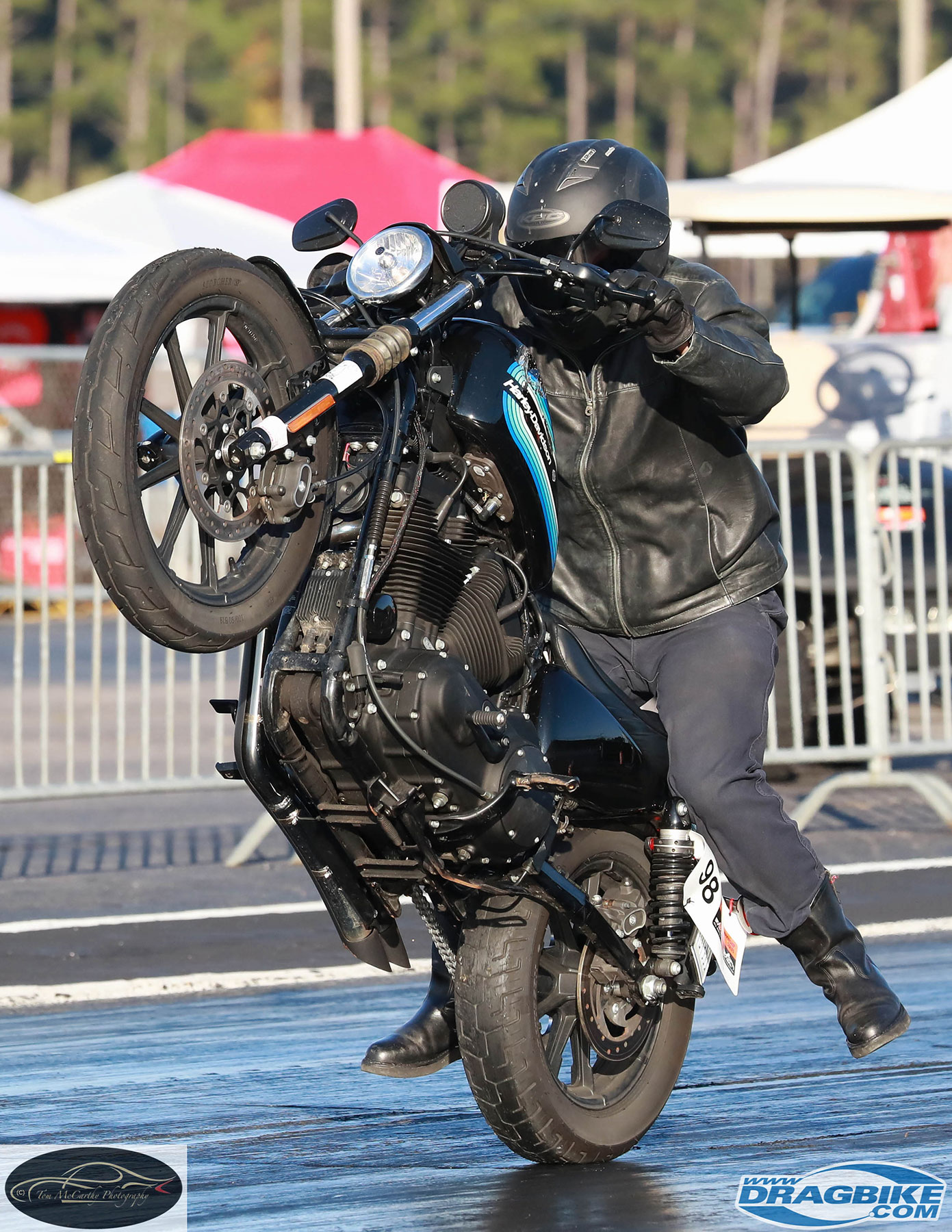