Current motorcycle drag racing fans, racers, and tuners need to make a few adjustments in the way they see V-Twin racing. V-Twin racing is actually the intellectual drag racer and money can’t buy you wins. This article is my opinion and doesn’t reflect thoughts from any racer or sanction.

All motorcycle drag racers are very creative people and strive to be the fastest of their class. Some achieve this through the amount of money they can afford to spend. The other group has been reduced to relying exclusively on their mental abilities, to make machines do things they were never designed to do. Both groups are always searching for the most power and speed they can achieve from the four-cylinder Suzuki’s and Kawasaki’s and finally down to the two-cylinder V-Twin Harley design. 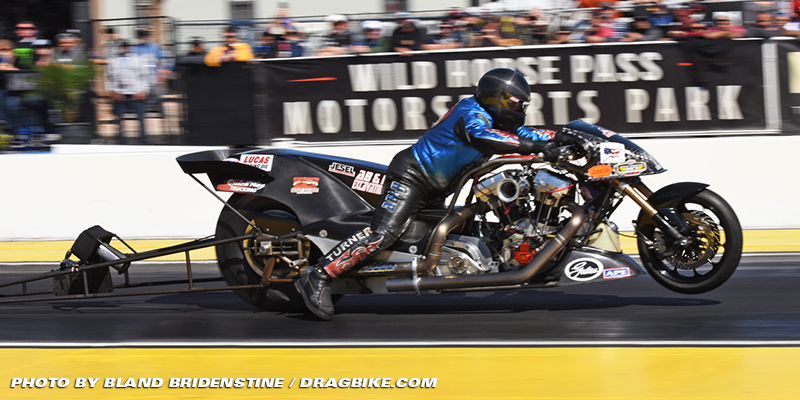 The four-cylinder Suzuki and Kawasaki groups seem to get all the attention for their speed and ET’s, which is sad, because everyone thinks the V-Twin group is mentally slow.

Some fans and less knowledgeable racers are always making comments like, “why would anyone struggle to try and drag race with the V-Twin? Don’t they know you can buy a 900 Kawasaki or a Suzuki Hayabusa to go fast, then tell every one of their speed accomplishments?

Let’s relate this to car drag racing for a moment. What would you think if someone brought out a 1918 four-cylinder Model T Ford, known as the Tin Lizzie, to drag race against a Top Fuel Funny car? People would tell this guy, “Look, just go buy any car with a 1967 MOPAR Hemi motor to drag race with.” This racer doesn’t understand anything about drag racing. He must be mentally slow and a wannabe. 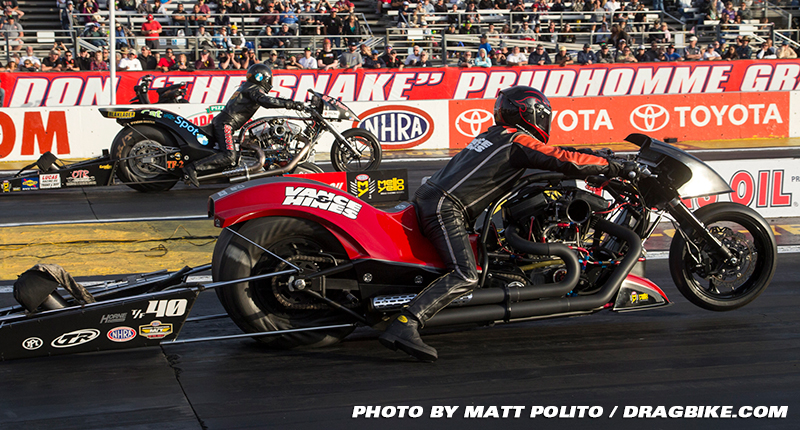 What would fans be saying, if after explaining all the racer’s mistakes in using such an old motor design, the 1918 four-cylinder Model T ends up running speeds close to the current class? People might think who or what is this racer? How is this hundred-year-old car capable of running almost as fast as the modern race car? This racer must be a genius or have some magical powers.

Everyone should know this feat is astounding and impossible. It takes a lot of smarts to trick and outsmart a 1918 four-cylinder motor, to make it run that fast. Look at the motor changes since 1918. They have come a long way from an inline four-cylinder to the 1967 V8 Hemi.

Well, V-Twin drag racing is exactly like the above Model T racing against today’s Top Fuel Funny Car.
The V-Twin was first designed in 1889 by Gottlieb Daimler. The basic V-Twin design has been used by all manufacturers since. That original 1889 V-Twin motor produced 17 horsepower and a top speed of 85 mph. In 1969 the big inline four-cylinder motorcycle motor came out as Honda’s premier motor in the CB750. The design was later improved upon in 1999 by Suzuki’s Hayabusa.

The V-Twin motor has had about all the design improvements possible within its two-cylinder design. The current V-Twin racers have to outsmart and trick the motor to get them to run any faster. These racers, and tuners have become like the current computer hacker geniuses. Who make the computers and gadgets do things they were not created to do, things other people can never make them do, or ever even imagine making them do. 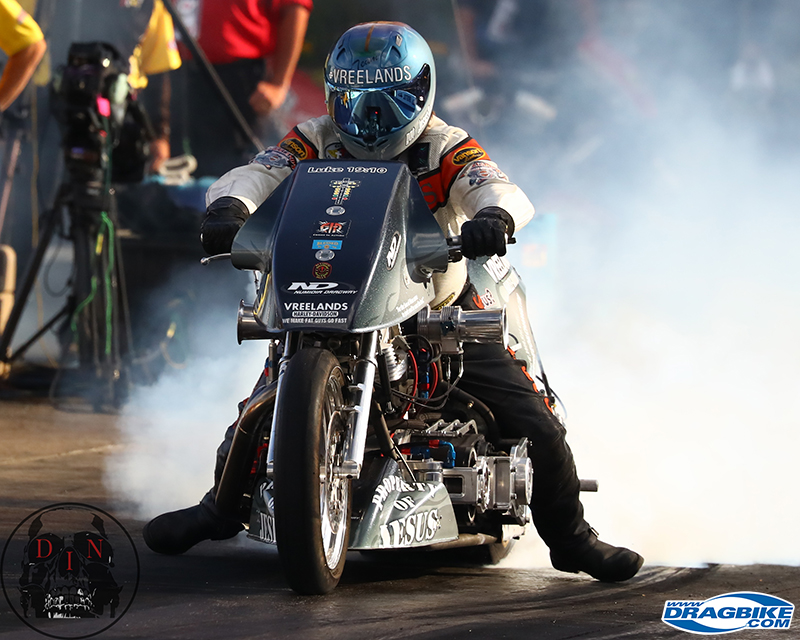 The inline fours motorcycle motors make so much more power by producing high RPMs. The motors can survive being spun as high as 14,000 RPMs. The inline four motors are much more balanced than a V-Twin design could ever imagine. The V-Twin is always out of balance with only two cylinders to produce the power. The V-Twin can maybe survive 8,000 RPMs in a gas carburetor bike and only 6,000 RPMs in a Nitro Fuel Bike before it self-destructs. Making the hundred-year-old motor design perform even within 25% of the current inline four Suzuki should be unthinkable and unbelievable. Just like if someone told you that Model T was going to run an ET and speeds within 90% of the Nitro Top Fuel Funny Car. You would call that crazy and a bold-faced lie.

The V-Twin racer and tuners aren’t in this for the accolades, just their own satisfaction. They enjoy figuring out how to make the 100-year-old motor run faster. These guys are like the alchemist of the Middle Ages, computer hackers, or the scientists of today. Working their magic experiments to find that ever-elusive speed and power. Most work alone or with maybe just one helper. Just like the alchemist, metallurgist or hackers from the days past and today.

They learn on their own and seldom teach someone else all their tricks. They are fearless people to ride these crazy things, using their thought experiments on the V-Twin motor that might explode from under them like a stick of dynamite. They do it just for the pride of being able to say they have done something very few people alive can do. This is what drives the V-Twin racers to succeed.

There are several racers, tuners, and owners I could list here such as Mike and Patty Romine, Jay Turner, Ricky House, Rocky Jackson, Gregg Dahl, Donnie Huffman, John “JT” Toth, Janette Thornley, Rich Vreeland, and Charley Douglass. One racer I appreciate as a genius and almost an icon is Kirby Apathy. He has always worked by himself to come up with his ideas. He is a solitary person with really no sponsorship, but he continues to be on the cutting edge of his Nitro Pro Fuel class.

So are these guys Geniuses hacking the V-Twin motor or are they immortals with special magical powers? If you disagree, please watch them, think about what they are doing. Also, think about this article and get involved.

If you feel you are smarter than the V-Twin racer or think it is really easy, please show us.

Even John Force gets it. He has all the sensor data and engineers around him to run as fast as he does. He knows the amount of skill it takes to make these things run almost as fast as he does in his Nitro Fuel Funny car. 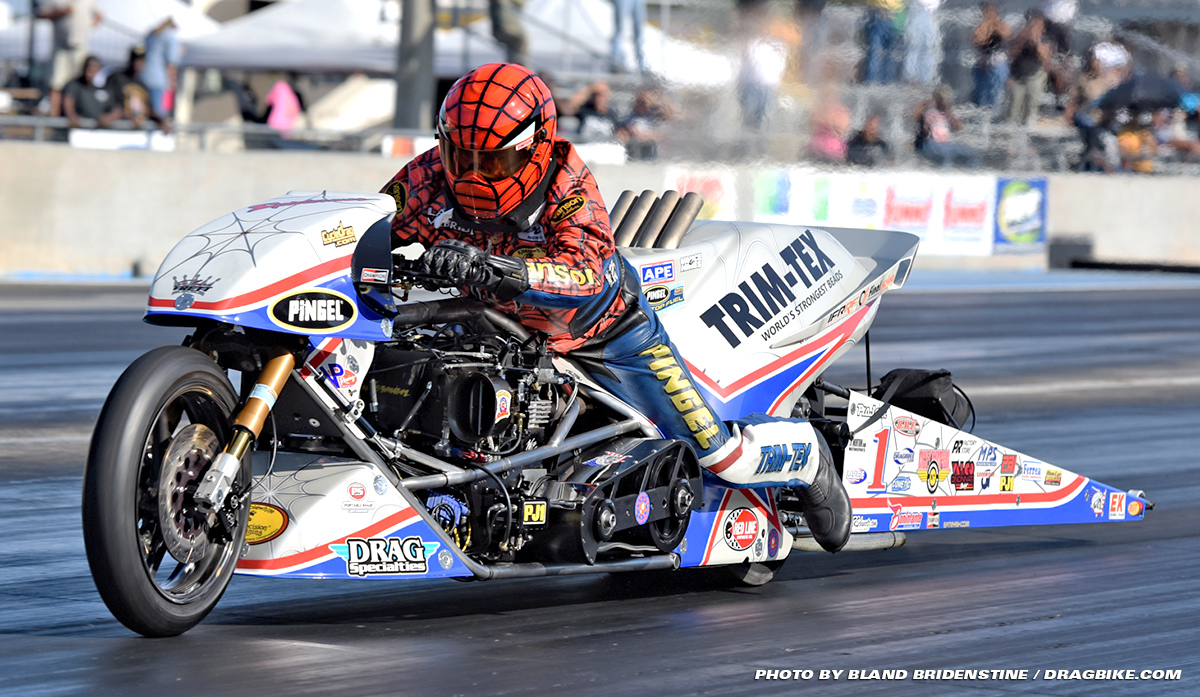 On March 28, 2018, Jack Korpela interviewed the famous Larry “Spiderman” McBride, where Larry was showing Jack a Nitro Top Fuel Harley he was putting together for a friend. Jack asked Larry if he was ever coming back with a Nitro Top Fuel Harley again. Larry said it had been over 20 years since he had been on a Harley. Jack said you wouldn’t have any trouble riding it, would you? Larry said no problem riding it, but it takes an awful lot of testing to become competitive on those bikes.

Jack asked, what by the end of the year? Larry replied that it may take two years. Now here is the top man riding an inline four-cylinder in the Nitro Top Fuel Motorcycle Drag racing telling you how tough these things are to make run.

I rest my above case, about which you have to be a smart racer, tuner to campaign these bikes. Remember these V-Twin guys are running within 90% plus of Larry McBride’s current records.

V-Twin motorcycle drag racers, or tuners, are humble, respectful people who have the same type of mentality as Apathy. The V-Twin racers are just like the medieval alchemist using their thought processes, trying to get some gold out of these motors. Each one of these racers and tuners are amazing people and have accomplished some great things.

The following is just a small list of the AMRA V-Twin Racing member accomplishments: 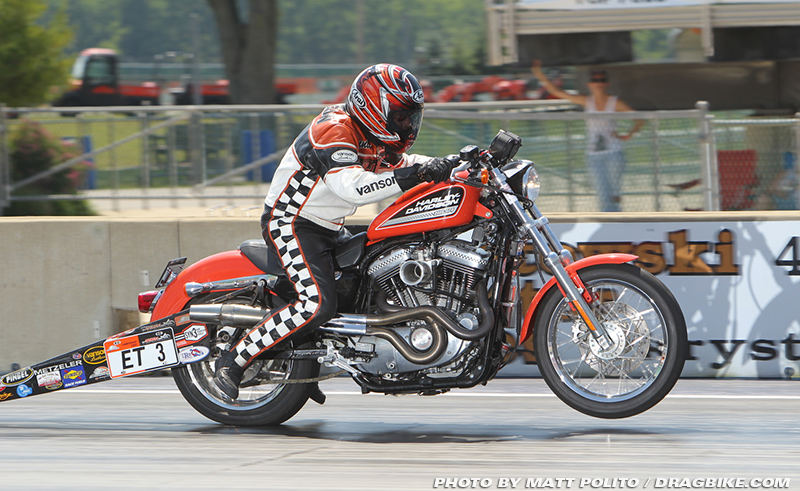 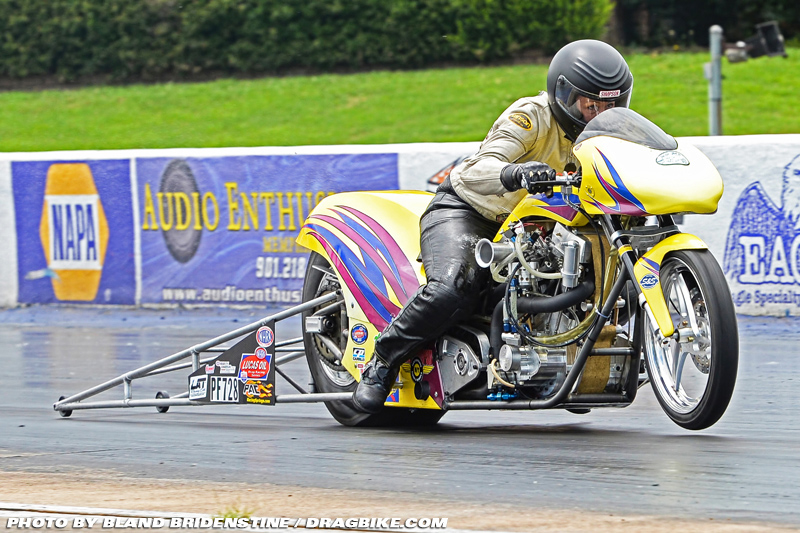 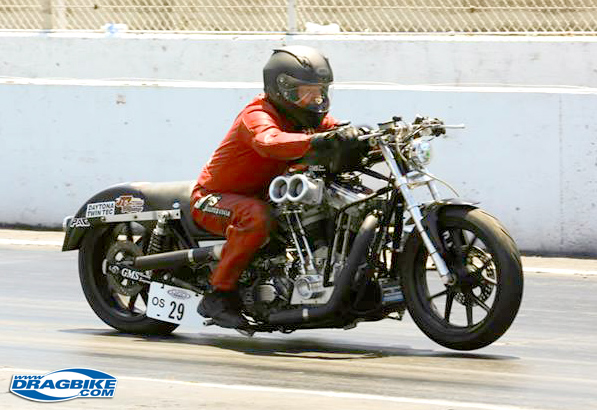 Gregg Dahl: Owner of GMS Racing Engines. AETC Engine Builder of the Year in 2017. AETC is Advanced Engineering Technology Conference. Gregg was also the key speaker for the event. 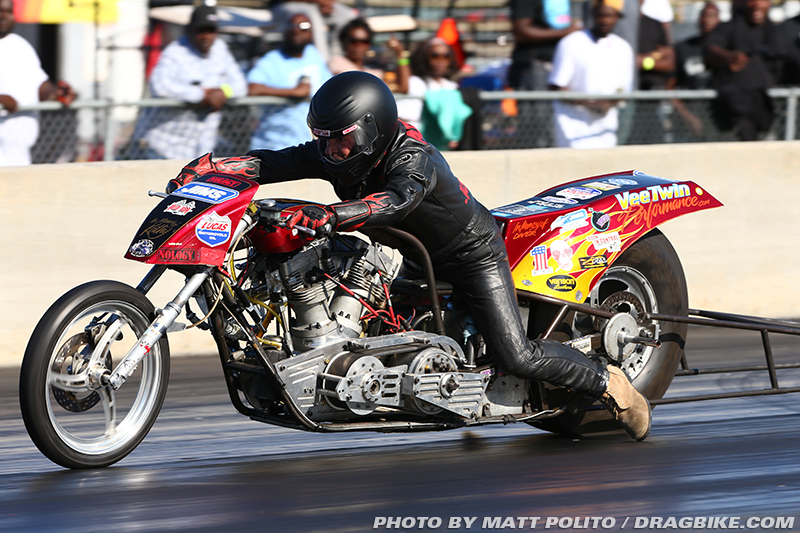 All classes of V-Twin racers and tuners deserve your highest respect as an intellectual racer.

Anyone can buy the newer speed, but very few can outsmart a 100-year-old motor design. They are not at all slow thinkers, and they don’t let themselves fall for the easy path of just buying speed. They should also get the public’s admiration and attention for their abilities. So come on out and watch motorcycle’s elite intellectual drag racers and get to know them. Talk to them in the pits before or after race time. Look at their amazing machines and watch your favorite racer at any of the following events: