Congratulations to Jeremy Williamson of Evansville, Indiana! Jeremy is champion of the Energy One Clutches Dressers Class at the AMRA, Michigan All Harley Nationals this past weekend! He is also recipient of $50 from Samson Exhaust for his win. When asked how he won the race, Jeremy replied, “A lot hard-work and dedication.”

Although Jeremy is not new to drag racing, as he has been racing since he was young, this was Jeremy’s first AMRA event ever! He took #1 in the qualifiers, won the first round and took the bye into the finals. Besides his hard-work and dedication, when asked what he contributed specifically to his winning he stated that he went to the event early, on Friday night before the race, and did a few test runs. He then made some adjustments to the gear change, took a few more practice runs and was happy with his performance and time. He stuck to what he knew worked, and it worked for him! 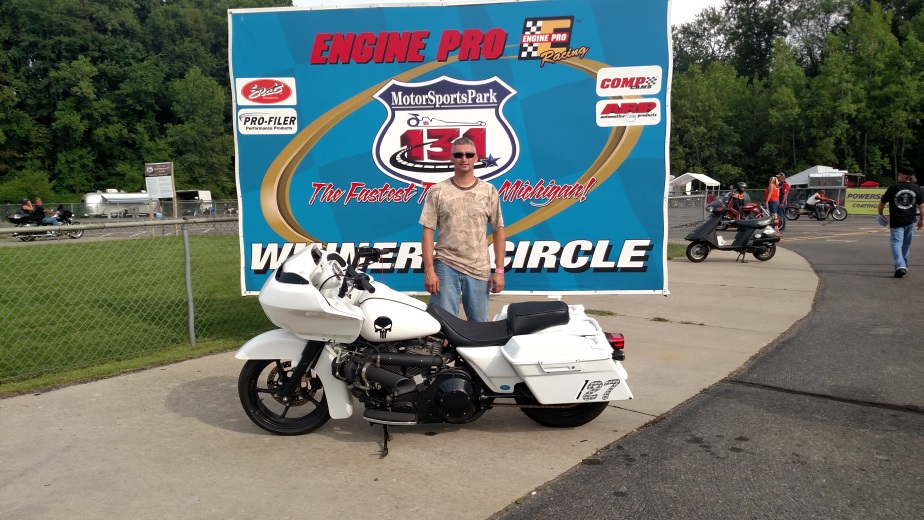 Jeremy is very open and proud of his 2005 Harley Twin Cam Road Glide. When asked how he’s feeling about winning, Jeremy stated, “It’s pretty rewarding!” Even though he broke 3rd gear transmission during the final race, it was worth the win. This was a new build and he was proud of the performance of his bagger, so much so that he was willing to share a few changes he made which he believes helped him win the race.

Jeremy’s bagger is a 2005 Harley Twin Cam Road Glide that is a true street bagger. Here are the specs and a few of the mods Jeremy made in building his Draggin’ Bagger winner:

The rods, crank and cylinders are stock Harley. Cylinders are bored to 98 CI and use CP forged piston. The stock heads have been ported and used 1.9”/1.61” valves. The clutch basket and transmission are stock, and since 3rd gear was broken, Jeremy may re-think the use of a stock tranny! An MPS air shifter kit is custom mounted for those lightning fast power shifts. An HPI 55mm throttle body feeds the 98” motor with all the fuel it can burn. The intercooled turbo kit was designed and fabricated by Jeremy (nice workmanship!). A Thundermax auto-tuner ECM handles the fuel mapping chores and finally a chain conversion from the stock belt drive was necessary with the additional horsepower the turbo generated, and finally, Jeremy modified the swing arm to make chain adjustment manageable. This is what Dennis “The Nitro Menace” Fisher calls, “One bad-ass street bagger!!!”

This was an amazing race for Jeremy at the age of 42 fulfilling a dream. Jeremy hopes to be at the Bowling Green race in September, as long as he can get his transmission fixed and operational. Knowing the dedication of Jeremy, and his hard-work ethic, I have no doubt he will do his best to be at Bowling Green. Congratulations again to Jeremy Williamson of Evansville, Indiana! 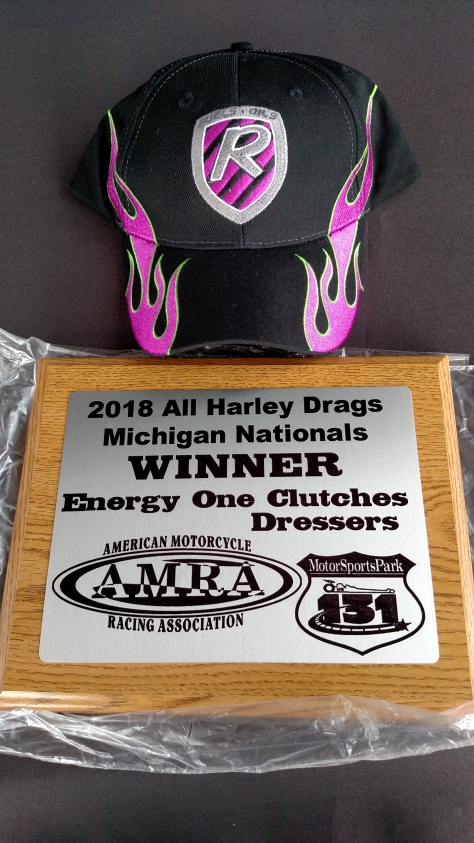