This past weekend was filled with excitement, drama, and some intense drag racing action at the legendary Beech Bend Raceway park located in beautiful Bowling Green Kentucky. The ProMod class was pleasantly surprised to hear the new of rider that would enter the class, and was then blown away to find out it was going to be super star, Rickey Gadson. Larry Pratt of Iron Eagle teamed up with Rickey Gadson to add a serious competitive edge to their program and totally surprise this already impressive class.
Saturday’s qualifying was nothing short of spectacular for the ProMod class. Flyin Ryan Oehler took charge and laid down some early impressive runs and sat in the number one spot on the ladder with an ET of 8.485 at 153.77 mph, until the very last pass of the day. Ryan and crew chief “Bad Brad,” decided to sit out third round of qualifying to save on parts and to their surprise, Rickey Gadson laid down low ET of the day on his final pass, putting him on top with an ET of 8.477 at 156.99 mph. The excitement was unbelievable! 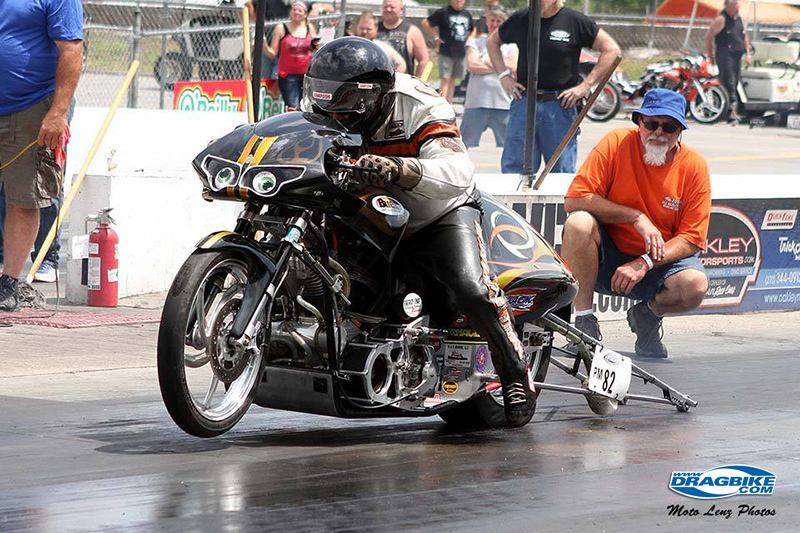 Shane Pendergrast and John Arnold were right there all weekend and showed that their team “Double Trouble Racing,” was not going down without a fight. Shane made several great passes on Saturday and took the number three spot on the qualifying ladder with and ET of 8.546 at 154.65 mph. However, during round two of qualifying Shane’s bike shut off just short of the finish line and severally damaged his motor. Shane was forced to also sit out round three and begin to disassemble his motor. Shane and John worked late into the night and were able to install new rocker arms and get their motor back in service. Gary Douglass took the number four spot on the qualifying ladder with an ET of 9.22 at 151.66 mph. However, Gary’s run was cut short much like Shane’s and suffered a catastrophic failure to his ProMod power plant. Kyle Leblanc would round out the qualifying ladder and take the number five spot for this ProMod class with an ET of 9.389 at 141.06 mph. Kyle had his bike in total pieces just days before this event and was still trying to sort out several gremlins. 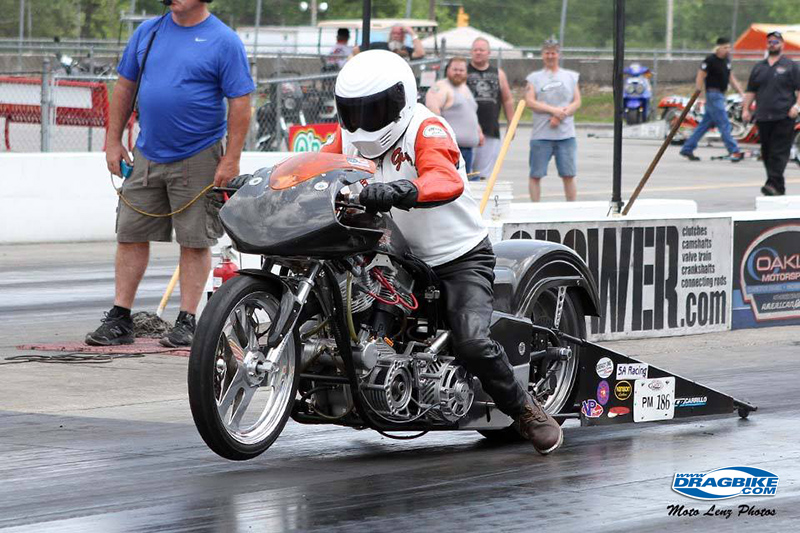 Sunday, much like Saturday was filled with excitement. The air was slightly better but dark clouds surrounded the area. Round one would move both Shane and Rickey on to the semifinals with both riders having solo passes. Gary Douglass was unable to make his repairs giving Shane a bye run. Flyin Ryan and Kyle Leblanc would face off in round one, and both riders duked it out like a street race. Ryan was out first but spun the tire hard and also had problems shifting into third gear. Kyle was chasing him down but didn’t have enough to overtake Flyin Ryan. 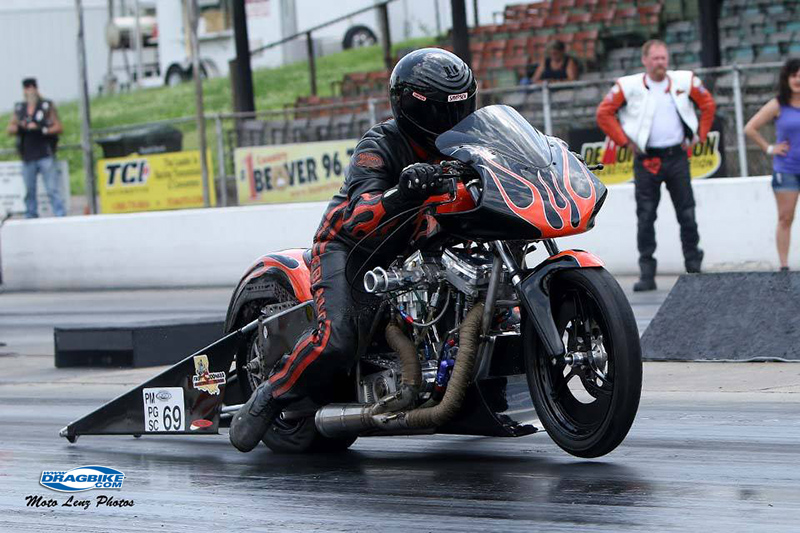 First to faceoff in round two was Shane Pendergrast and Rickey Gadson. As both riders began to stage, Rickey turned on the both bulbs and caught Shane off guard, and to add drama and a spin to this exciting weekend Shane timed out on the tree giving Rickey a free pass to the finals. Rickey Gadson laid down the quickest ET of the event on his solo pass, running 8.43! Ryan lined up for his bye run, and was unable to get his bike into third gear. After shifting through the gears a few times, Ryan got his bike fired up and pulled up to the line. The green light dropped and Flyin Ryan was off. Ryan was unable to make clean shifts and feared the worst for his transmission. Ryan finished the pass with and ET of 8.87 at 151.77 mph. This is when things got very exciting. Ryan has blown third gear out of his transmission. Ryan and Bad Brad race back to the pits and began to completely disassemble the bike. The crew worked frantically to get the tranny out of the bike. Fellow ProMod competitor, Kyle Leblanc heard the new s and rushed to his trailer to get a spare tranny for Ryan. The team was able to remove this damaged transmission, use the gears from Kyle’s trans to repair theirs, and in 45 minutes had the bike back up and running. 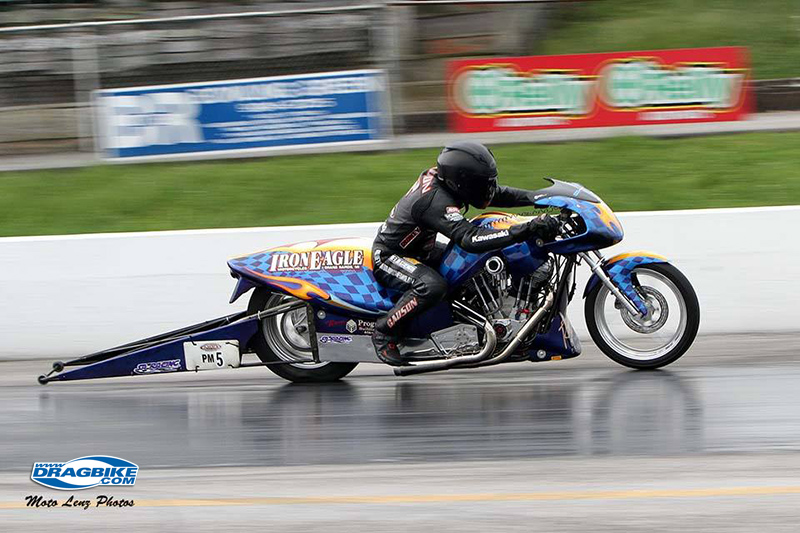 If that wasn’t exciting enough, Rickey and Larry Pratt patiently waited for Ryan and Brad as rain drops started to fall. The team flew up into the staging lanes just seconds before Rickey was about to run. With a quick check of the tire pressure, Flyin Ryan and Rickey Gadson pulled into the water box for the ProMod final round. Both bikes light up the tire in the water box and quickly pulled up to the line. Rain drops are just seconds from hitting the track. Both rider’s stage and…Bam! The green lights drop and the riders were out! Flyin Ryan is out first with a .020 reaction time to Rickey .071. Flyin Ryan was off like a rocket, both bikes roar down the track, Flyin Ryan makes it to the finish first with an ET of 8.502 at 154.49 mph to Rickey’s 8.659 at 157.36 mph. This was without a doubt the most exciting final of the day! Flyin Ryan takes home his first win of the season and does it with sheer determination! 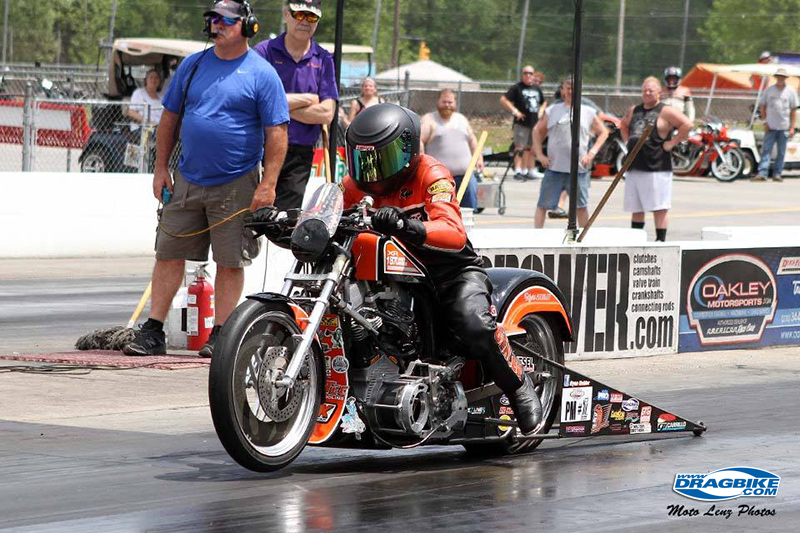 The Pro Mod class continues to wow crowds in the AMRA circuit, don’t miss them next month when they head east to Mason Dixon Dragway in Hagerstown Maryland on May 19-20 for the Harley Davidson of Williamsport Gas Nationals. 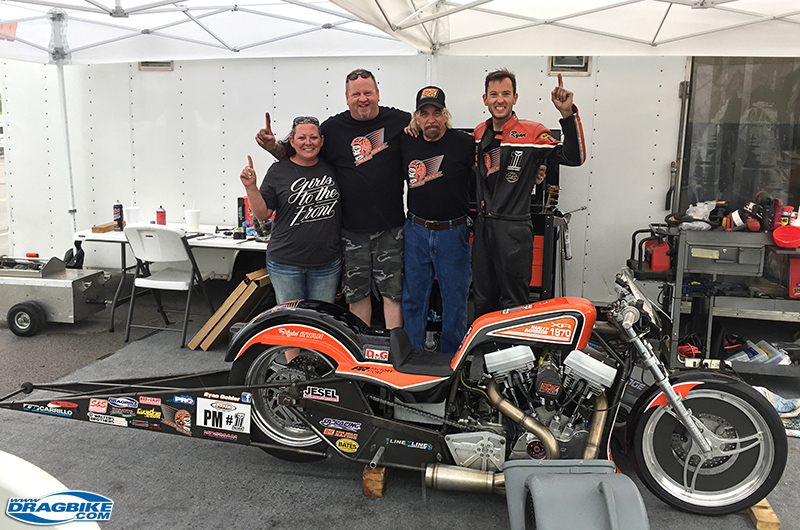