Winter is over and the AMRA Pro Mod’s laid down some serious rubber this past weekend at State Capitol Raceway’s AMRA 6th Annual Cajun Blowout. Weather is always a cause for concern when traveling into Cajun country for the spring season opener. However, it would probably take a tsunami to keep these Pro Mod guys at home after a long winter. Weather did play a major factor in this weekend’s performance. Heavy rain and storms early Saturday morning delayed the entire weekend. Qualifying was limited to only two rounds over Saturday and Sunday.

Flyin Ryan Oehler took the number one spot with an ET of 8.43 at 151 mph. Ryan struggled to make a clean pass during qualifying, but was able to get from point A to B and get the job done.

Shane Pendergrast qualified number two with and ET of 8.56 at 155 mph. Shane and crew chief John Arnold built a complete new motor and did several other top secret mods during the winter and were shaking their machine down all weekend. However every pass was quicker and quicker, which showed some serious potential for elimination on Sunday. 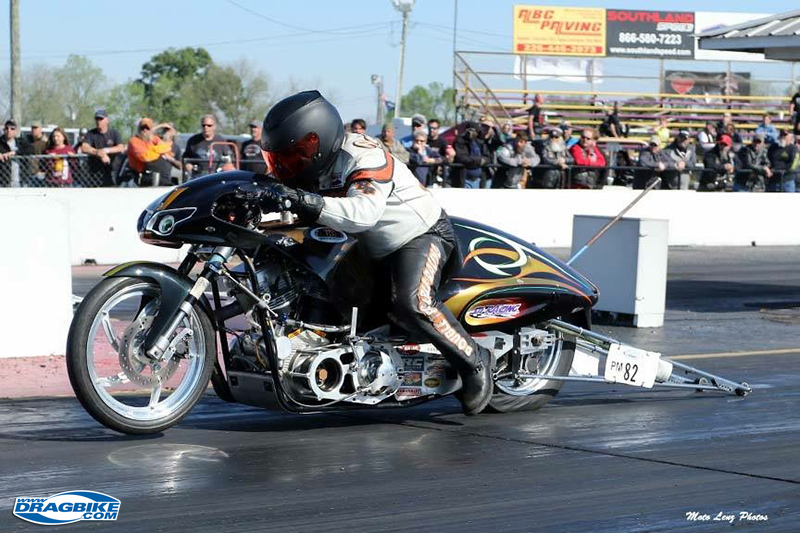 Kyle Leblanc took the number three spot for the Pro Mod class and was running his butt off all weekend. Kyle rounded out the class with an ET of 9.02 at 148 mph. Kyle was working out some gremlins and hopes to have them eradicated by Sunday.

After the fog dissipated Sunday morning, qualifying was wrapped by noon and elimination were under way. Flyin Ryan had a bye run for round one of elimination and nearly flew off his bike when his handle bars broke in half at the 60’ marker. Ryan was able to get control of the bike and coast to the finish line and to complete his pass. 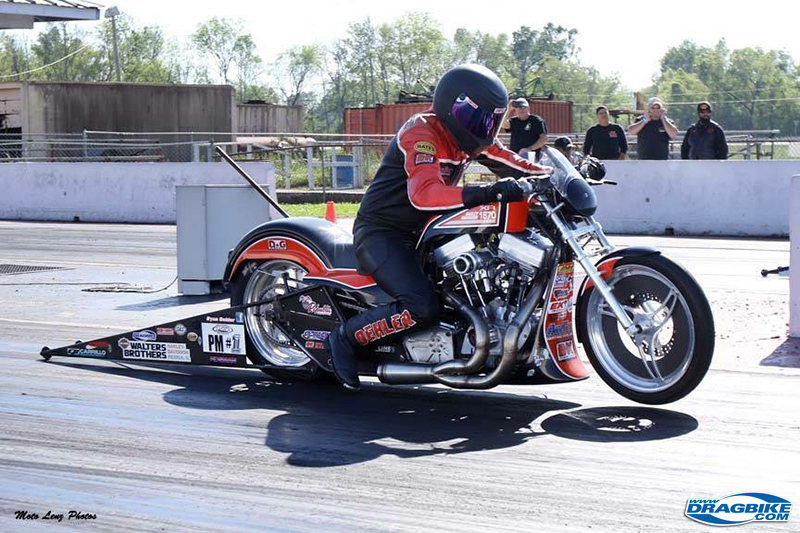 Shane Pendergrast lined up with Kyle Leblanc to face off for round one. Shane laid down a solid pass with and ET of 8.61 at 153 mph and took home the win. Kyle ran his best time of the weekend with an ET of 8.90 at 151 mph, but it was not enough to take down Shane.

In preparation for the finals it was time for Flyin Ryan, Bad Brad and teammates Doug Miller and Tyler Finley to go into action and make the repairs to their handle bars and controls. Luckily with the help of fellow racer John Toth of JT’s Cycles they were able to get a section of 7/8 chrome molly and with a torch and vise they were able to fabricate a replacement handle bar. 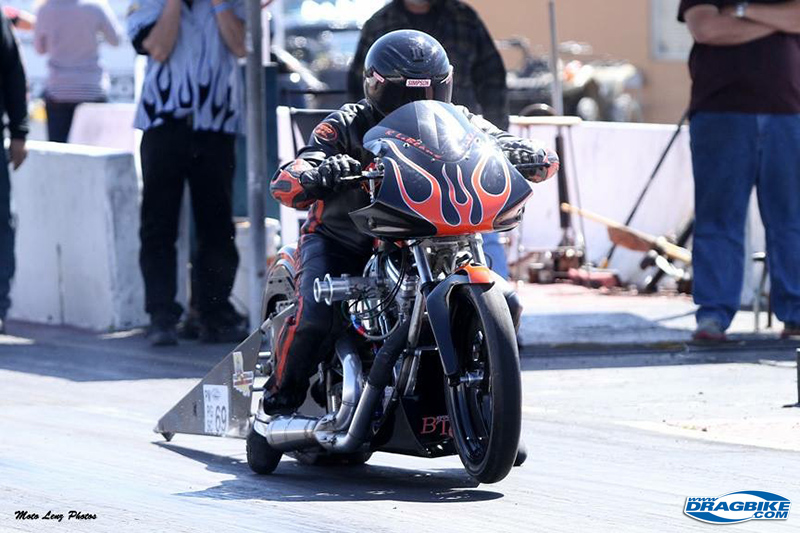 “Calling all bikes and riders to the finals,” rang over the track PA system. Shane would have lane choice of Flyin Ryan and decided to put Ryan in the Lane that he had seemed to struggle with the most all weekend. Both bikes came alive and roared out of the water box. When the green light dropped, Shane was out first, Ryan ripped through the 60’ and passed Shane, the bikes were neck and neck at the 330’. Shane was able to pull past Ryan at the 1/8 mile and that was that. Ryan watched Shane truck right on by him and take home the big win. Shane run’s his quickest time of the weekend with an ET of 8.53 at 155 mph to Ryan’s 8.58 at 153 mph. It was one of the best side by side races all weekend. 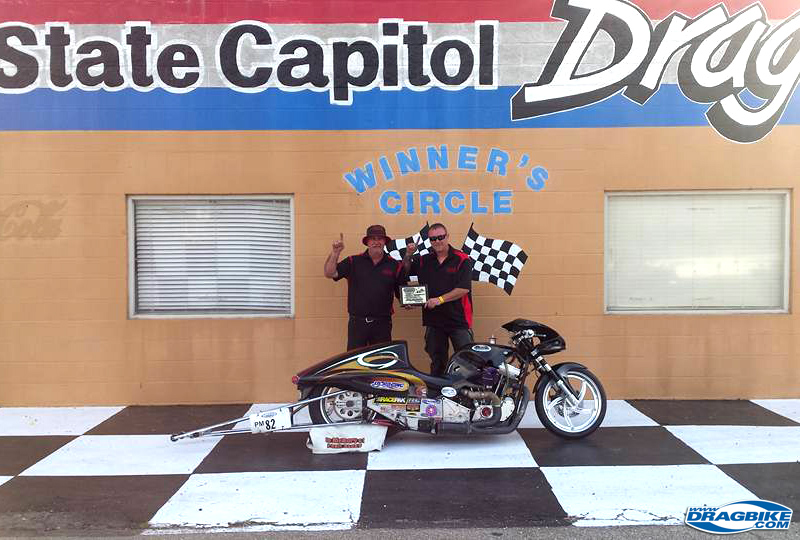 The Pro Mod class has been very fortunate to have such great sponsors who continue to support the class year after year. Randal Andras of K&K Marine, Frank Capone of Bad Apple Racing, Ryan Oehler of Flyin Ryan Racing, and Michael Davis of Motor lenz Photos have made the purse in this class the largest purse of any of the professional gas class. Be looking for these Pro Mod guys to battle it out again next month at the AMRA Spring rally from Beech Bend Raceway in Bowling Green, Kentucky on April 29-30. 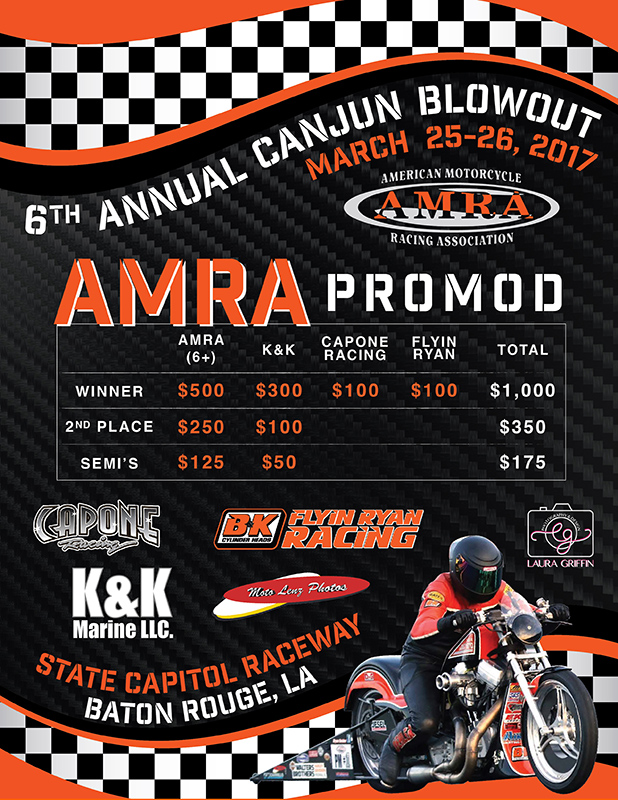