The Pro Mod class continues to show its strength with over half the qualifying field competing with in one-tenth of a second.

Saturdays qualifying sessions were very exciting for several of the riders. Shane Pendergrast and crew chief John Arnold went two for two, taking the number one qualifier once again for this Pro Mod class. Shane laid down several great passes and secured the number one spot with and ET of 8.53 at 153.16 mph. Ryan Oehler struggled during qualifying and kept the crowd on their feet as he ran inches from the wall on nearly every pass. Ryan held down the number two spot with and ET of 8.55 at 150.88 mph. The man to really watch in qualifying was Jerry Lee Cloyd. Jerry was very consistent on the tree as well as riding his Pro Mod machine like it was an ET bike. Jerry’s reaction times for qualifying were .008, .007, and .000! Wow, did I mention Jerry is 70 years old.

Jerry took the number three spot with and ET of 8.60 at 151.24 mph. The competitors of the Pro Mod class have a serious new threat to keep their eyes on. 22-year-old Clayton Danford has teamed up with Iron Eagle’s Larry Pratt and made his very first passes on this new top secret Pro Mod. Larry Pratt has reinvested into his program and with the help of Steve Allstaedt. Clayton made several great passes and took the four spot with an ET of 8.62 at 142.5 mph. Gary Douglass stayed very consistent all weekend and secured the number five spot in the qualifying ladder with and ET of 8.63 at 153.95 mph. Gary’s bike was running very strong and showed he ready to put another Pro Mod win on the wall this weekend. Taking the number six spot was Henry Stanton.

Henry has been struggling with carburetor issues so far this year and hopes to get it figured out soon. Henry ran 8.98 at 119.86 mph and hopes to improve on race day. Justin Collier made the long trip from sunny Florida to show his support for this Pro Mod class. Justin damaged his motor during qualifying and took the number seven spot with an ET of 11.12 at 96.87 mph. Rounding out this eight bike field was Kyle Lablanc. Kyle also damaged his motor during qualifying and worked his butt off to get his new Pro Mod machine down the track. Kyle would launch hard but have to coast down the track on nearly every qualifying pass and took the number eight spot with an ET of 14.71 at 64.27 mph.

Now wake up!!! It’s race day and these Pro Mod competitors were ready to throw down and see who be the last man standing. Round one started with Ryan Oehler making a solo pass due to Justin Collier having and engine failure. Ryan lined up and dropped the hammer and showed that his horsepower was nearly unmanageable as his bike burned the tire 150′ just inches from the wall with and ET of 8.61 at 153.79 mph. Next, up we have Shane Pendergrast vs. Kyle Lablanc. Kyle had worked all night and made some serious improvements to his Pro Mod machine.

This is when it gets really tense for these Pro Mod riders. Everyone is stacked on top each other and it’s anyone’s game at this point. Round two started with Ryan Oehler vs. Jerry Lee Cloyd. This was a repeat of the season opener and Jerry really wants some payback and hopes to put Ryan on the trailer. Ryan and Jerry lined up and bam! It was over when the lights dropped. Jerry was just too quick on the tree and goes red. Ryan cuts a good light at .034 but runs right next to the wall again running and ET of 8.61 at 152.81 mph. Jerry was right there and runs 8.66 at 150.63 mph. Next, up we have Shane Pendergrast vs. Clayton Danford. Shane really wants to send this Iron Eagle racing time home early. The two riders line up and the green light drops. Shane is out first with a reaction time of .074 and runs his best pass of the weekend with and ET of 8.50 at 154.32 mph, but it wasn’t enough to take down Clayton. Clayton runs an unbelievable pass with and ET of 8.40 at 155.67 mph and shows that this new engine configuration will be very competitive for this rookie rider.

Attention Pro Mod bikes to the staging lanes range out over the PA system. Ryan was thrashing in the pits just seconds before this final round. Knowing that they really needed to make their bike go straight and run the numbers in order to compete with this new Iron Eagle machine of Larry Pratt, Ryan and Bad Brad had to throw everything they had into their tune up. Ryan and Clayton push their bikes into the water box. Both bikes light up and sound very mean. After the burnout and these riders wipe the sweat from their heads and roll up to stage. This is Claytons first Pro Mod final and everyone is watching with anticipation. The green light drops and BAM! Ryan is out first, both bikes are running straight and suddenly Ryan’s bike goes hard to the right nearly crossing the center line, but he hangs on and keeps banging the gears. Clayton is right there and just didn’t have enough to catch Ryan. The incremental for this pass was awesome. Ryan cut a .038 light to Claytons .184, both bikes ran nearly identical ET’s. Ryan ran and ET of 8.625 at 152.24 mph to Claytons 8.627 at 154.79 mph. What a spectacular final round for this Pro Mod class.

More and more Pro Mods are showing up to duke it out in this amazing tight class. The class has been blessed by tough competitors and great sponsors. Full season sponsors include Capone Racing, Moto Lenz Photos, Ryan Oehler Racing, and B&K Cylinder Heads. Keep your eyes on this class, if you don’t they just may pass you bye. The next AMRA race is the Junior Pippin Nationals in Reynolds Georiga, May 21-22. Come check out the world’s fastest Harley drag bikes. 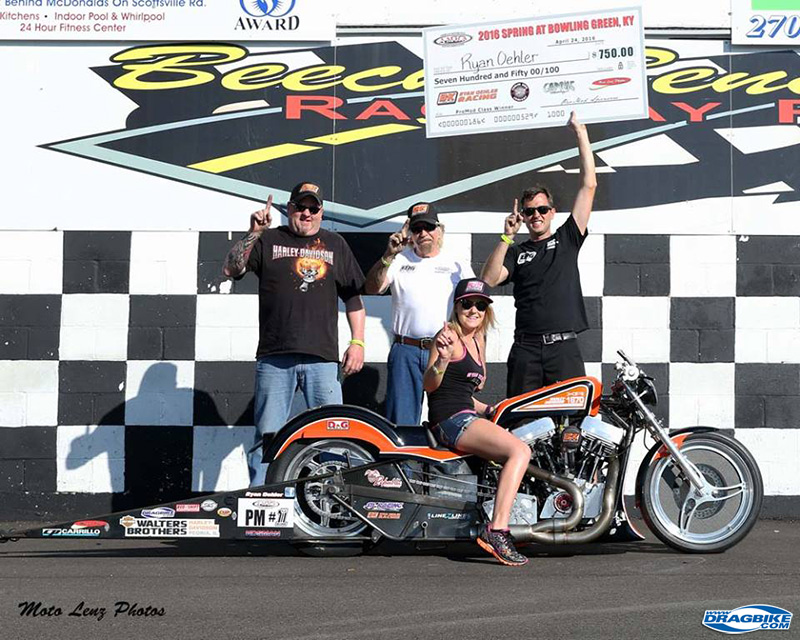