Congratulations to Steve Matthews, winner of the Super Gas Class of the AMRA at Michigan All Harley Nationals! Steve was also the recipient of a set of Samson Exhaust’s pipes which he says, “It was icing on the cake and will go on my Harley Road Glide.”

When asked how Steve was feeling after the race, he said, “Fantastic!” He said this was his second win since he began racing four years ago. He tries to hit up all 6-8 races throughout the year and it has always been tough competition. Even though this class has the majority of racers, he likes the competition. He said it is always a close race within .2 seconds or closer. That’s what he likes. That is why he stays in this class plus, most of the racers are his friends.

When asked what contributed to his win, Steve replied, “Everything worked out.” Although he was 7th out of 16 in the qualifiers Steve said, he adjusted shift points and RPMS which did the trick. Steve said, “I was happy with my performance,” also stating, “No one is going to do this on their own.” 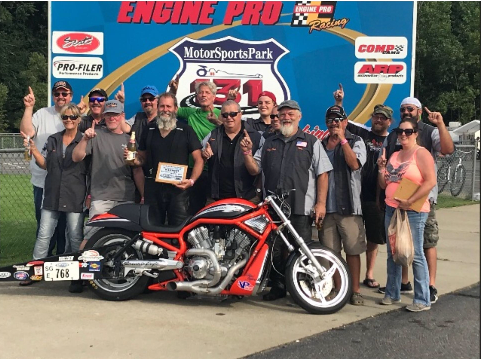 Steve said that last year he was #2 to Andy Horn who took 1st place. Steve said that getting 2nd place gave him a taste to win it – for the entire year. He said it often comes down to his buddy Andy and himself and he feels they are both at their best when they race each other. They might be friends, but the are both in it to win it!

Steve said it was his dad who gave him the fever to race when he was growing up because his dad was a drag racer himself and Steve used to watch his dad race cars. Although his dad tried to steer Steve away from motorcycles, Steve bought his first bike at age 19. Steve later went to races with his buddy, Jeff Workman and that is how he caught “the bug.” He eventually bought one of the 650 VROD Destroyer drag bikes built by Harley Davidson. Steve said he wanted the best and he believes his Harley Davidson Destroyer is the best.

Steve is not shy about giving credit where credit is due. For instance, he gives a lot of credit to Vreeland’s who built the motor and states not only is his motor reliable, but Vreeland’s gave it a little more magic. Steve also credits his local shop, Valley Racing of Beecher, Illinois. He says co-owner, Brian Conley, is a past champion in AMA Road Racing and champion in AMRA Drag Racing. He believes Brian is the best dyno tuner around. 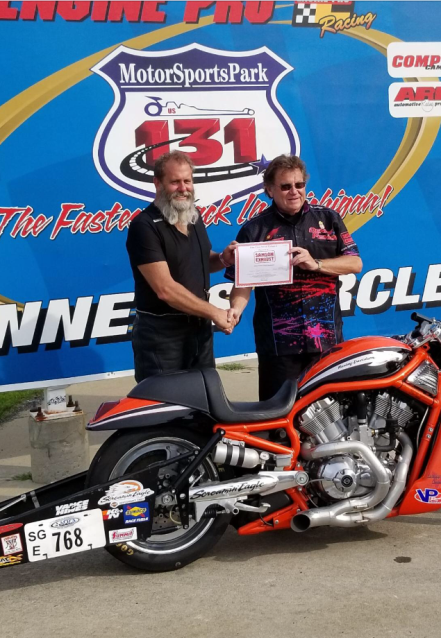 Steve said that everyone in the Super Gas Class category are willing to help each other out even if they need a part to run the next race. The camaraderie is felt by everyone and they always have each other’s backs. Everyone helps and supports each other to be and do their best. Steve said, “Even though I was happy with my performance, no one is going to do this on their own.” He gives credit to all of those who he says has helped him become his best including Andy Horn, Dennis Waldron, Jeff Workman, Tony Curtis and Rickey “Griz” Lee – just to name a few.

Steve said this was a great race to win because there were neighbors, friends, family and his Dad in the stands cheering him on. Steve likes to hit up all races so we will see him again in Pennsylvania. Great job Steve! Congratulations on a job well done!