Words and Photos by Charlie Wieland

Well, the AMRA fifth race of the eight-race series held at US 131 Motorsports Park in Martin, Mi. is finally in the books. Just like the previous four out of five races it was a question of rain. Again the gods were kind to us, and we were able to perform all the race functions promptly. Test and tune completed on Friday night, letting the racers know they would be dealing with moisture-ladened air all weekend. The storms moved out early Saturday morning, with qualifying to start at noon. 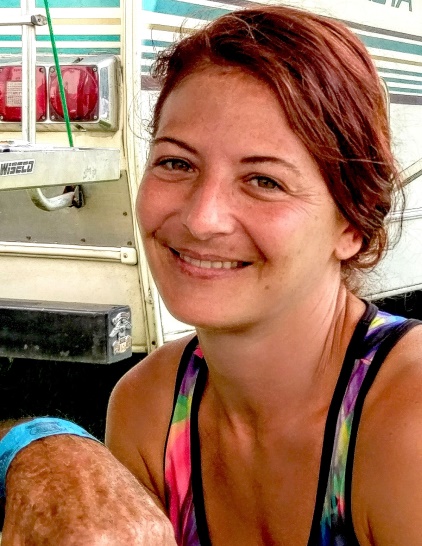 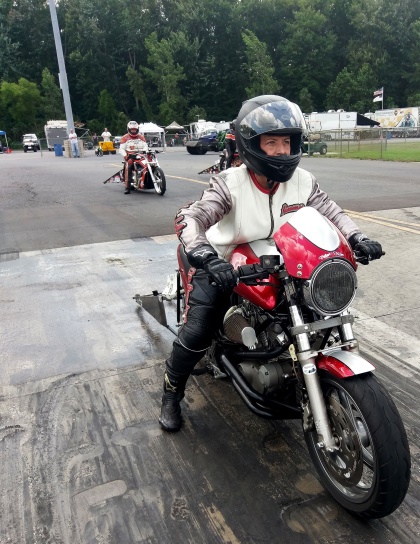 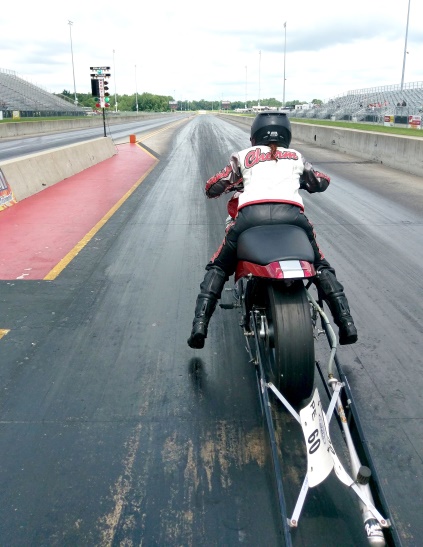 It was Kimberly DeShields’, first time out since her accident where she broke her fingers on her throttle hand at Mason-Dixon Dragway on May 20, 2017, and she managed top qualifier in Pro Eliminator. 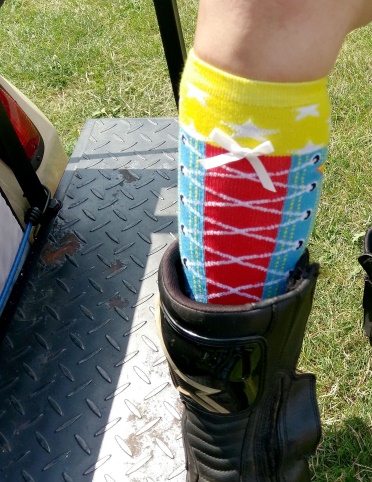 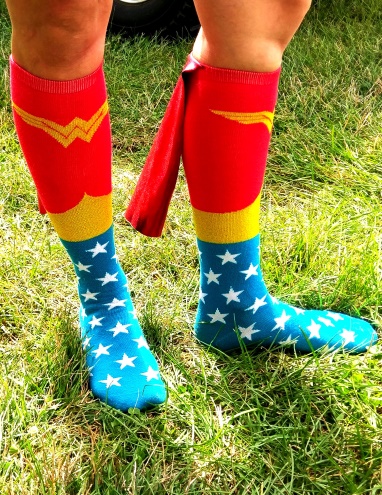 Kimberly was wearing one of her two favorite pairs of race socks as added support for a comeback weekend win. 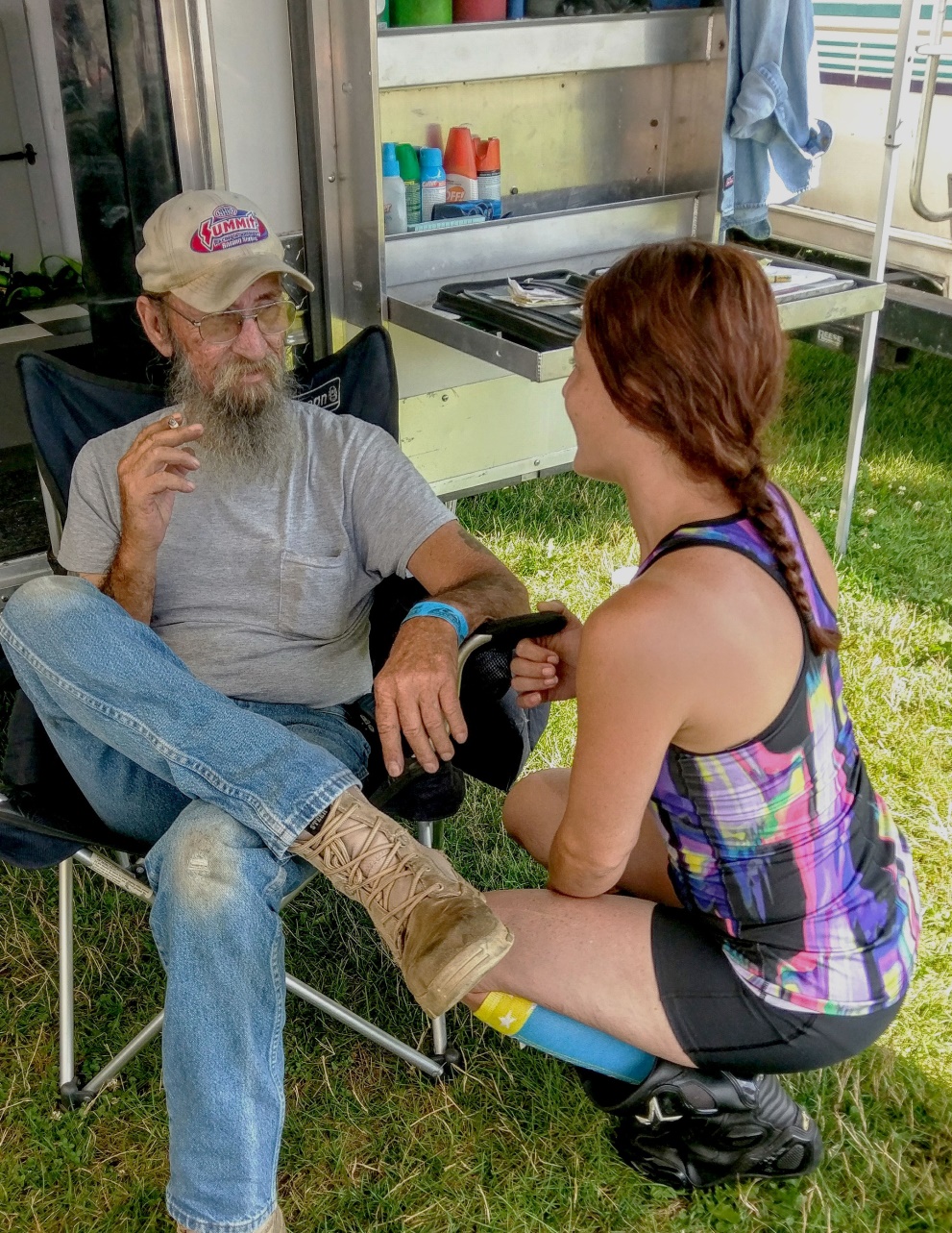 Kimberly and the bike tuner Chuck Newman had discussed race strategies for the elimination rounds. She was super excited about being back and won the first round Eliminations but she became overly aggressive and red-lighted out losing the second round and ending her comeback class win.

Missing two races and going out in the second round has dropped her from first to second behind the very tough racer Kevin Winters in the standings. Kimberly, who was leading the class, is now 140 points behind Winters. 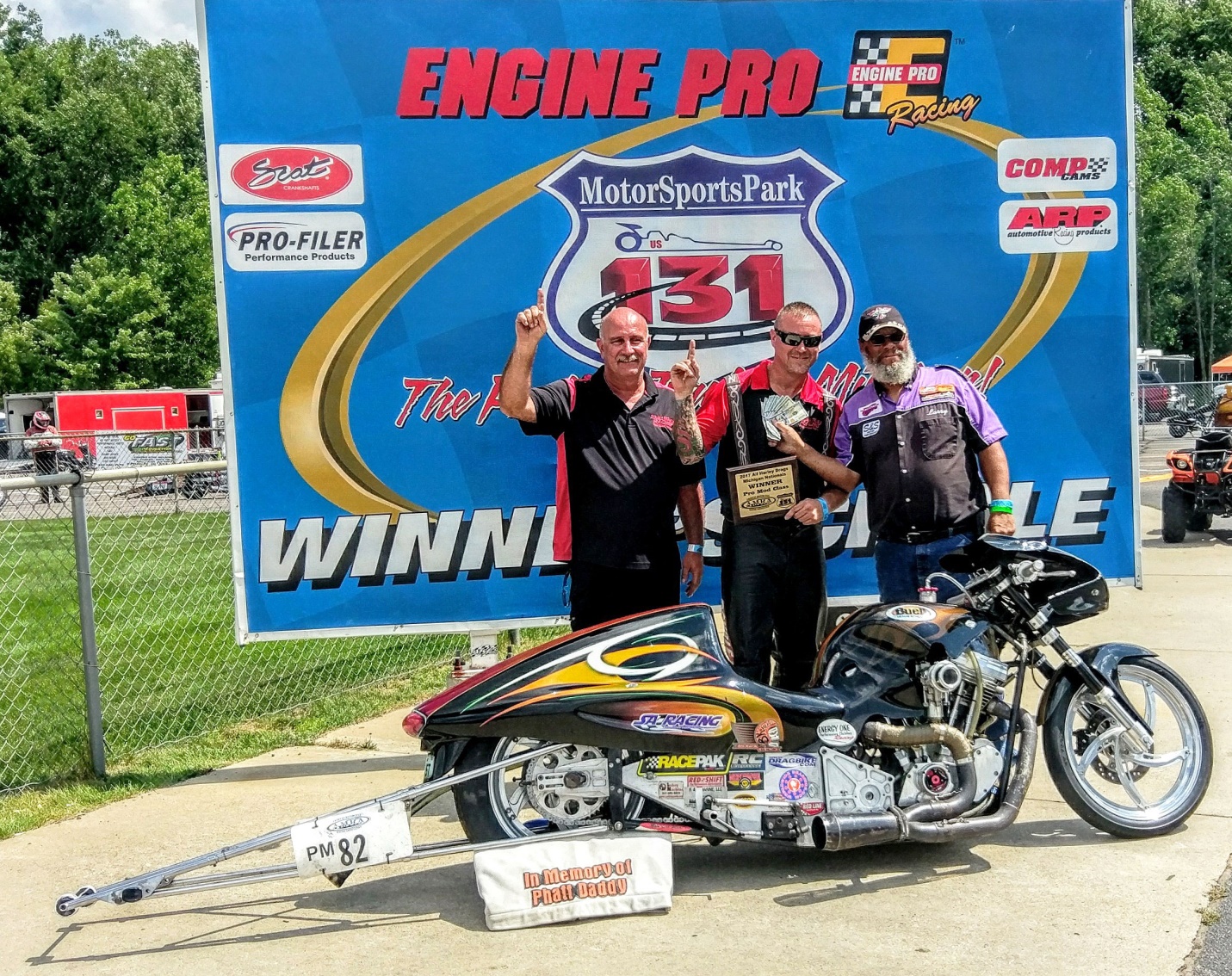 Congratulations to Shane Pendergrast and John Arnold of the Double Trouble Race Team on their win and first place in the class standing this weekend. Thanks to Iron Eagle Motorcycle and Larry Pratt putting up an additional $2,000 to the class winner, made it a great weekend for Shane and John.

Rest of the Event Winners

Nitro Funny Bike: Rocky Jackson had one of his best runs of the year on the Dragon bike with a 6.908-second ET pass at 182.82 MPH. Congratulations Rocky Jackson. The Nitro Funny Bike finals came down to Rich Vreeland and Dennis Fisher. Vreeland won the class with a 7.065-second ET at 195.06. Remember, these time were under some terrible atmospheric conditions.

Pro Fuel: Janette Thornley, was the top qualifier and running strong all weekend. Thornley made the finals only to be beaten by Gary Stroud, the number three qualifier. Stroud ran a 7.483-second ET at 162.45 MPH for the win.

Open Gas: Don Ratliff was number one qualifier and the eventual class winner against Billy Doherty. Ratliff ran a 9.362-second ET at 134.97 MPH for the win.

Modified: Gary Douglass the number one qualifier and the class winner beating Don Leslie Jr. in the finals. Douglass ran a 9.626-second ET pass at 135.91 MPH for the win.

Pro Mod: Shane Pendergrast was number one qualifier and went to the finals against a new rider, J. Jobbe on the Iron Eagle motorcycle of Larry Pratt’s. Pendergrast won the finals when Jobbe red-lighted. Pendergrast ran an 8.678-second ET pass at 150.80 MPH for the win and an additional $2,000 purse added by Pratt of Iron Eagle Motorcycles. Congratulations on the ProMod win, Pendergrast, and Arnold of the Double Trouble Race team.

Super Comp: Don Ratliff was the number one qualifier and the class winner beating Keith Richner when Richner red-lighted in the finals. Ratliff ran a 9.151-second ET pass at 131.54 MPH.

Top Eliminator: David Doremus was the number one qualifier only to be beaten by Paul Lowe in the first round setting up the finals for Billy Doherty against John Toth (JT). JT ran a 9.451-second ET pass at 141.38 MPH beating Doherty. The win is one of JT’s two class wins this weekend.

Super Gas: Curt Stuckenschneider was the top qualifier but had mechanical problems in round, two, setting up a Paul Lowe and Andy Horn final. Horn beat Lowe with a 9.906-second a class record ET pass and only .006 from a perfect ET of 9.900, turning a 134.93 MPH.

Super Pro: Mike Houser was the fast qualifier and made it to the finals against a tough Don Doremus. Doremus ran a 10.447-second ET with a 120.90 MPH to beat Houser.

Pro Eliminator: Kimberly DeShields was the fastest qualifier. She retired herself with a red-light against Kevin Winters in the second round letting Winters progress to the finals against Terry Mason seventh qualifier. Mason ran an 11.016-second ET pass at 116.88 MPH to beat Winters at the tree. Winters had a .065 reaction time to Mason’s .055 reaction time with the ETs of Winters’ 11.015 to Mason’s 11.016 giving Mason the win.

Street Eliminator: Sandra “Sam” Barkley was the fastest qualifier only to get beat in the first round. Darrel Smith and Chip Sutinen Jr. were in the finals with Chip winning on an 11.654-second ET pass at 105.78 MPH. Chip is retiring and wanting to sell his race equipment. Chip Qualifying sixth and winning the class, should give any new racer a step up in becoming an AMRA drag racer with proven equipment.

Eliminations: The finals were between Bill Rowe Jr. and John Bradley with Bradley being the class winner.

Outlaw Street: Charley Douglass was the top qualifier and eventual class winner. The finals were between Douglass and Mike Motto. Motto’s motorcycle had broken and was unable to make it to the line, leaving Douglass, as the class winner.

Hot Street: John Toth (JT) was the fast qualifier and eventual class winner in the finals between JT and D. Dennis. JT had a 9.568-second ET pass at 141.02 MPH to beat Dennis’ 9.585-second ET. It was JT’s second class win of the weekend.

AMRA’s next race is in Numidia, PA on August 19-20, 2017, at the Numidia Dragway. Please remember the track gates will not open until noon on Friday, August 18, 2017. The entrance is a public road with nowhere to park, and you can not park on the road, or you will be ticketed. If you come early, please check out and make reservations at a couple of the area campgrounds near the track.