The Australian National Drag Racing Association has released its calendar for 2013, with a raft of new venues coming on board, expanding the ANDRA Pro Series and Rocket Allstars Racing Series to reach 10 venues and making a return to Melbourne.

The release of the calendar at such an early date is unprecedented, but required given the changes and planning occurring as the national championships shifts from split years to a calendar year season.

The new management of ANDRA has been working with venues around Australia to achieve significant goals for racers in the 2013 calendar including ANDRA Pro Series events in Victoria and the Northern Territory for the first time since the early 2000s.

ANDRA CEO Greg Humphreys said the calendar is a transition as many new events are sorted out and new venues come to grips with running ANDRA championship drag racing.

“We’re going from three ANDRA Pro Series venues in 2011 to six in the 2013 calendar with Adelaide coming on board this season and Hidden Valley and Calder Park being welcomed to the fold,” he said.

“This is a massive achievement in a very short time frame and we are looking forward to working with these new venues, as well as our fantastic venues in Sydney, Willowbank and Perth, to build great events.

“There’s areas we need to work on as we head towards 2014 including eliminating a few of the bottle necks and spreading out our events, but we need to walk before we can run and just getting into these new markets is a major accomplishment.”

ANDRA Drag Racing championships will now visit every state and territory except Tasmania and the ACT, making it a truly national series for the first time in a decade. It is a tremendous expansion.

Mr Humphreys said the new events would need time to build but the future continues to look bright for the health of Australian drag racing.

“Most venues have worked with us in the transition to a calendar year which is something the racers, our members, requested and which we have already had a very positive response from in regards to sponsors for next season,” he said.

“Having new markets to take ANDRA Drag Racing into is very exciting. We are really looking forward to working alongside the venues on behalf of the racers to build these events in coming years.”

ANDRA is continuing negotiations and more rounds could be added to the calendar in coming months. 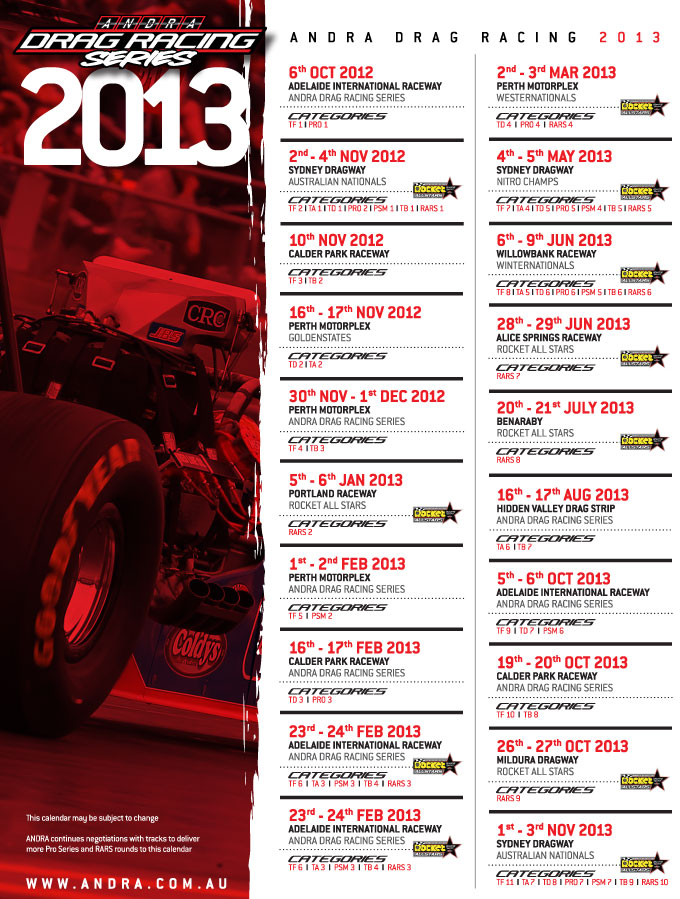