Nitro is back at Perth Motorplex this weekend with the opening rounds of the ANDRA Drag Racing Series featuring national championship racing for both Top Fuel and Top Fuel Motorcycles.

Western Australian Terry Burnett won the round of Top Fuel Motorcycle last season at the Motorplex but his lead up to this year’s version has been anything but smooth.

In testing last weekend, Burnett’s motor had a bolt come loose in the bottom end, which got caught up in the camshafts and caused a dangerous nitro ‘hydraulic’, which lifted the cylinder head off the motor and was so explosive that it bent the top chassis rail of his nitro Harley. 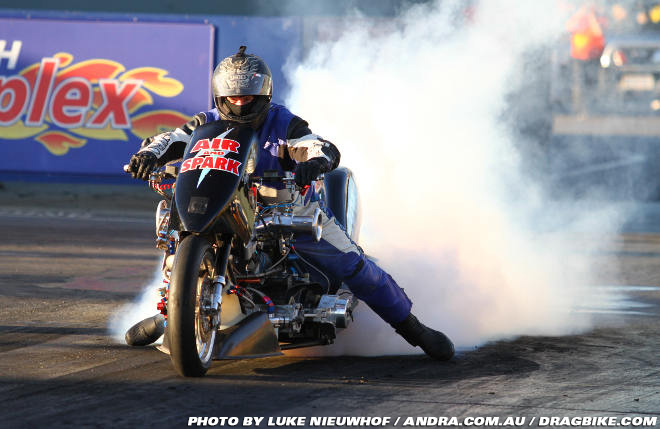 But Burnett said he never considered missing this weekend.

“I always do whatever it takes to make it, even if we have to go 24 hours a day to get there I will do it,” he said.

“This is our only national points event for Top Fuel Motorcycle in Perth this season and I want to prove that last year’s win was not a fluke.”

Burnett worked together with Bravo Resources to rebuild the bike and estimates over 100 hours has been put in so far.

“Clyde Carstairs at Bravo has been amazing; the blow up did a horrendous amount of damage,” he said.

“The bike is mostly back together, we’ve still got to build the engine up as we are waiting for parts from the east coast, but we will be there, no matter what.”

Top Fuel Motorcycle has seen a return to strength for its opening round with ten teams to front the starter across two individual championship rounds over two nights.

Burnett said he was excited to see the big field set to race.

“This is the best race meeting Top Fuel Motorcycles have got in WA this year.,” he said. “I’m very very happy with the field. I’ve worked too hard all year not to be there.

“Our goals for this weekend – go rounds on both days and win them.”

Top Fuel and Top Fuel Motorcycle begin from 6pm on both Friday and Saturday nights.

The event also forms the second round of the Aeroflow Sportsman Drag Racing Championship.