The ANDRA Drag Racing Series and Aeroflow Sportsman Drag Racing Championship got off to an early start this morning as the sun began to shine and the track came around but the full race program was unable to be completed.

Similar to Friday night, safety concerns were raised as a result of rapidly dropping track temperatures.

Pro Stock Motorcycle completed one round of eliminations but did not stage a semi final though the action came thick and fast.

But the drama came when Maurice Allen (NTR) defeated Tony Hinkley (NTR), after Hinkley took a tumble off the bike taking out the finish line cones. Safety crews reacted while Maurice Allen immediately pulled up his bike and ran to the aid of Hinkley who was okay and walked away.

As the night progressed racers would not get to see another green light once track and ANDRA officials deemed the surface to be unsafe due to the cold conditions.

Qualifying for the Southern Nationals presented by Fiat Professional & Essendon Chrysler Jeep Dodge got off to a promising start today but ultimately weather dictated proceedings at Calder Park.

In the end the weather rendered the track unsafe and the decision was taken to call it a night as the rain began to fall.

ANDRA Competition Manager Brett Stevens said the decision was made in the interests of competitor safety.

“The track was becoming colder and at the time of the decision to call the event we were two degrees from the dew point,” he said.

“We felt it was best to call off the rest of tonight’s schedule and move tomorrow’s schedule ahead by an hour and a half to ensure all brackets are able to complete the qualifying programme in a fair manner.”

The Southern Nationals is set to awaken the state of Victoria when the ANDRA Drag Racing Series returns to Calder Park with a massive hit of action this weekend. With Top Doorslammer, Pro Stock and Pro Stock Motorcycle on the bill, Melbourne fans haven’t quite seen that kind of show for sometime.

For Pro Stock Motorcycle racer Scott White, he has quite a lot of fond memories of the famed drag strip.

“I can’t wait to get back onto the track and meet all the fans that Melbourne is so famous for. I remember seeing huge crowds back in the days when Calder Park was the home of the Australian Nationals”, said White. “I had some great times in the early days of Pro Stock Motorcycle right here.”

“I was qualifying in fields that included Perth’s Ray Easson and the great Les Donnon, both who no longer compete in Pro Stock Motorcycle. However Phil Howard who is another legend of the sport is still racing and entered this weekend. I always qualified which was satisfying as the bracket back then was always oversubscribed, and around 1993 I finished the season with the No. 5 plate which at the time, was my best result.” 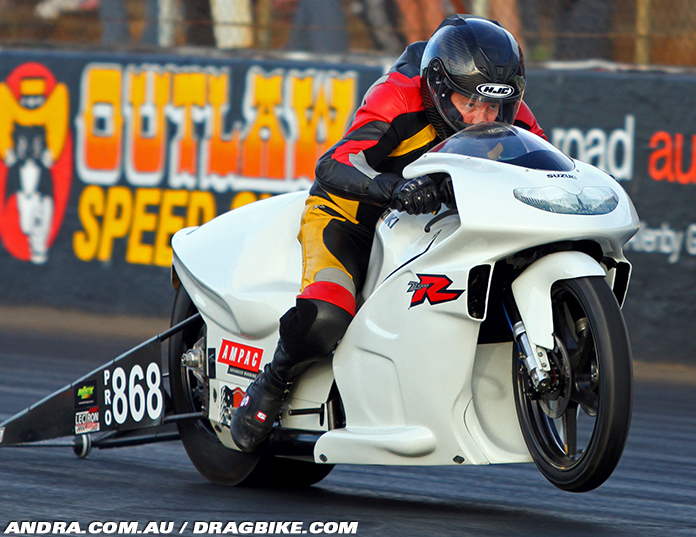 “We raced here last October for a round of the championship and I top qualified for my first time. While there was an issue with first round seeding, that was then and this is now. It’s a new season and I believe with that top qualifying time, we are still the quickest Pro Bike to ever run down that track!”

White’s last ride on his Suzuki was in November at Sydney Dragway for the Australian Nationals in 2013. He finished third in the ANDRA Pro Stock Motorcycle Championships and he’s hopeful that 2014 will be even bigger and better.

“I’ve been away from my home in Darwin for about a month working on a new bigger engine. With the assistance of Jim Hanlon at Superbike Performance, we nearly completed it, but sadly have run out of time. So we will be running our old motor which having run 7.32, remains competitive.”

White has also launched his own racing website – www.scottwhite868.com which has been put together to not only showcase his racing to the world but also hopefully spark some interest from the corporate world.

“We have a marketing manager onboard now who is pushing hard looking for some corporate support. We are also on Facebook so please drop in and like to follow our adventures.

“This season Superbike Performance is our main sponsor and they have provided me with great support and assistance with the engine program. We are keen and rearing to go. I don’t believe the lack of seat time will affect me. As soon as the team fires up the bike we’ll be back in the flow and will know exactly what to do.

“Winning one of those silver ANDRA Christmas Trees would be nice to take back home for sure and show the family.”