Rob Cassar’s little engine that could

Rob Cassar (Delahey, VIC) is making a return to Top Fuel Motorcycle for the first time since his frightening high-speed incident at Sydney Dragway in May 2014.

Following that accident, Cassar first returned to Modified Bike and then Competition Bike culminating in an Australian Nationals victory in January.

At the ANDRA Championship Grand Final at AIR April 9-10, Cassar will take on the might of three Top Fuel Motorcycle Champions in Chris Matheson (3 titles), Mark Drew (2 titles) and Chris Porter (1 title) all racing to add another Championship to their record. 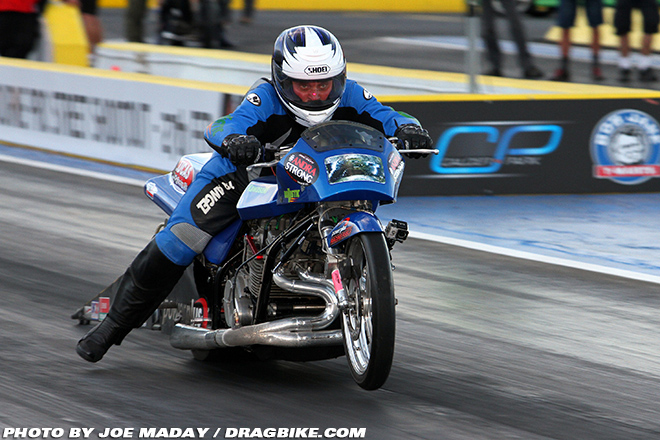 Cassar calls his 1500cc Kawasaki engine “the little engine that could” and will put it to the ultimate test against the men who between them, own the previous seven Top Fuel Motorcycle Championships.

“Since the last outing we have just fitted a Racepak data logger and went out to do some testing at the Doorslammer meeting at Calder in March to see if everything is working with further help from Dan Wagner,” said Cassar.

“Dan is a top Pro Mod tuner who runs in the PDRA and has some of the fastest bikes come out of his shop.”

Cassar is coming off a Competition Bike win at the Australian Nationals in January when he teamed up again with Igor Krasnowsky 20 years after Cassar was crew chief for Krasnowsky back when he won Pro Stock Motorcycle at the Nationals.

Since winning that Gold Christmas Tree three months ago Cassar is hungry for more and is waiting to pounce should Matheson, Porter or Drew struggle.

“Since winning our first gold tree I have spent time reflecting. Now it’s time to step back up to Top Fuel Motorcycle again and give it another shot.

“But this time I want that ANDRA Gold Tree!”

The 2015/2016 ANDRA Championship season will come to a close April 9-10 at Adelaide International Raceway featuring side by side Top Fuel passes between Darren Morgan and Wayne Newby plus Championship showdowns in both the professional ANDRA Drag Racing Series and Summit Racing Equipment Sportsman Series.

The Grand Final will also stream live (start time to be advised) on Sunday April 10 completely FREE and available in ALL locations including South Australia.

Just log onto ANDRA.com.au and visit the Live Stream page on the homepage on April 10 to watch on your computer, smartphone, tablet or smart TV.