Top Fuel Motorcycle action for the Australian Drag Racing Championship will fire up at the Perth Motorplex’s Goldenstates next weekend, November 26/27.

Amongst the TFM field will be local racer Greg Durack, who is hoping to break through for a maiden Goldenstates victory and valuable ADRC points with what he refers to as a ‘Frankenstein’ set-up.

“I think it is great that we are moving back to a competition which will be more unifying across the country with the ADRC,” Durack said. 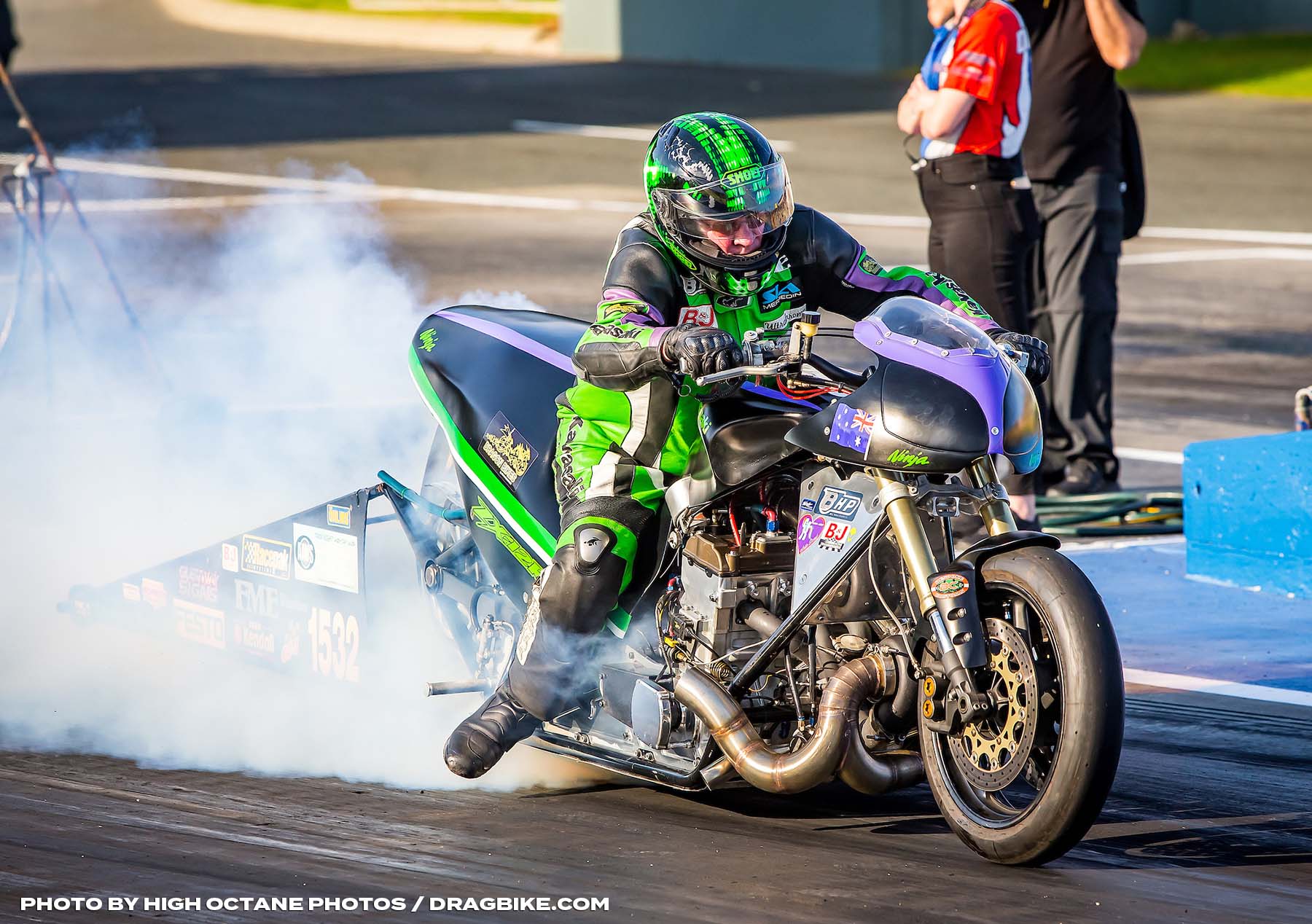 “Of course, once life returns back to normality, the opportunity to travel more and compete will be welcomed by all competitors.

“As far as our local pursuits go, our season is off to a good start – we did the PowerPalooza event, and at the WA season opener we won the event with three passes in the 6.60s, a personal best 60-foot time, and also a PB to the half track with a 4.29, so the bike is really starting to come around now.

“Over the off-season we modified the turbo, putting in a larger turbine and compressor wheel as we ran out of turbo last season.

“It is a real Frankenstein turbo that has somehow come together! Essentially, it is a larger frame turbo but in the previous frame and I am pleased that it is working as intended.

“Hopefully it will continue to perform at the upcoming Goldenstates. It is always a great two-day event and sees more entries in the Top Fuel Motorcycle class. I haven’t won one yet, but I will be trying hard this time around!

“While hunting a win, we will also be focusing on continuing to improve the bike and become more consistent now that we have sorted out a couple of issues. Continuing down this development path, I will be racing at as many events as I can, and supporting the ADRC as the opportunities present.”

Durack’s bike is one of a kind with plenty of smart minds behind the unique build.

“The bike is purely bespoke; it is the third one I have built and has been developed from my previous experiences of running turbocharged drag bikes,” he explains.

“It is turbocharged with an alcohol methanol fuel injection, running a primary drive belt off the crankshaft to a computer controlled pneumatic dry clutch which transmits the power through a three speed B&J Transmission.

“The engine is based on a Kawasaki ZX12R motorcycle, a ZX12R head – which is now billet and was made by Lou Cotter – on top of a Kawasaki Jetski STX15F bottom end which has provided a strong platform for the engine development.

“With these changes our capacity has been increased to 1570cc and the bike also boasts JE Pistons, CP Carrillo Con Rods and Web Camshafts.

“It is modelled on what we call Turbo Funnybikes and is the only one of its type in the world running on this configuration, a so called ‘New Age Funnybike.’

“Most Funnybikes are based on complete motorcycle engines with integral gearboxes and clutches in the crank cases. Consequently, on a weight basis I am at a disadvantage if you compare it to the Funnybikes we are seeing in the US and Europe at just over 1,000lbs compared to 700lbs.

“However, what I have built is a much stronger platform in the engine development, clutch and transmission and so it can handle a higher level of power.

“These projects always take a lot of effort and contribution by others, so I have quite a list of people I need to recognise for their efforts.

“Firstly, I would like to thank my family for their support – my wife Kimberley, sons Cameron and Scott, and younger brother Jeremey, who all are part of the Crew. Unfortunately, we lost Terry Godley, Jeremey’s father-in-law earlier this year due to a long-term illness, who was also an important crew member for over 15 years who loved to go racing and is sorely missed.

“I would also like to thank the people who have been involved in the build of the bike over the years, including Clyde Carstairs from Bravo Resources for the fabrication and his motorsports knowledge; Gavin Forbes from FME for all the engine machining work and perfection; Grant Bojanjac from Per4manz Turbochargers who has built the custom turbos over the years on the quest for more power, including the latest ‘Franken CP4’ which is looking good so far! There is nothing Grant doesn’t know about turbos, with Franken having gestated over a few sleepless nights. And finally, also Lou Cotter for designing and having fabricated a billet ZX12R head that flows substantially more than the OEM.

“I also want to mention the Perth Motorplex and its team – the Motorplex truly is a great facility; it is the best in Australia as far as I am concerned, and we are truly fortunate to have it here in Perth. It has great management and staff to make the racing operate and run as smoothly as possible, supporting all the racers in their endeavours.

“As we get ready for the Goldenstates, I would like to wish all of my fellow racers well, and if there are any other Top Fuel Motorcycles out there parked up in sheds, I encourage their owners to blow the dust off and bring them out and let’s go racing!” he grinned.

The Goldenstates, featuring a round each of the Summit Racing Equipment Sportsman Series and the Australian Drag Racing Championship, will be held at the Perth Motorplex across November 26 and 27. For more event information, visit www.motorplex.com.au