At this weekend’s EGT ANDRA Grand Finals, 13 national titles will come to an epic conclusion across the 2021/2022 Summit Racing Equipment Sportsman Series (SRESS) and the Australian Drag Racing Championship (ADRC).

In the ADRC, the Top Fuel Motorcycle bracket will come down to Greg Durack and Ricky Wood, with 58 points between the pairing ahead of the April 8-9 Series decider at the Perth Motorplex. 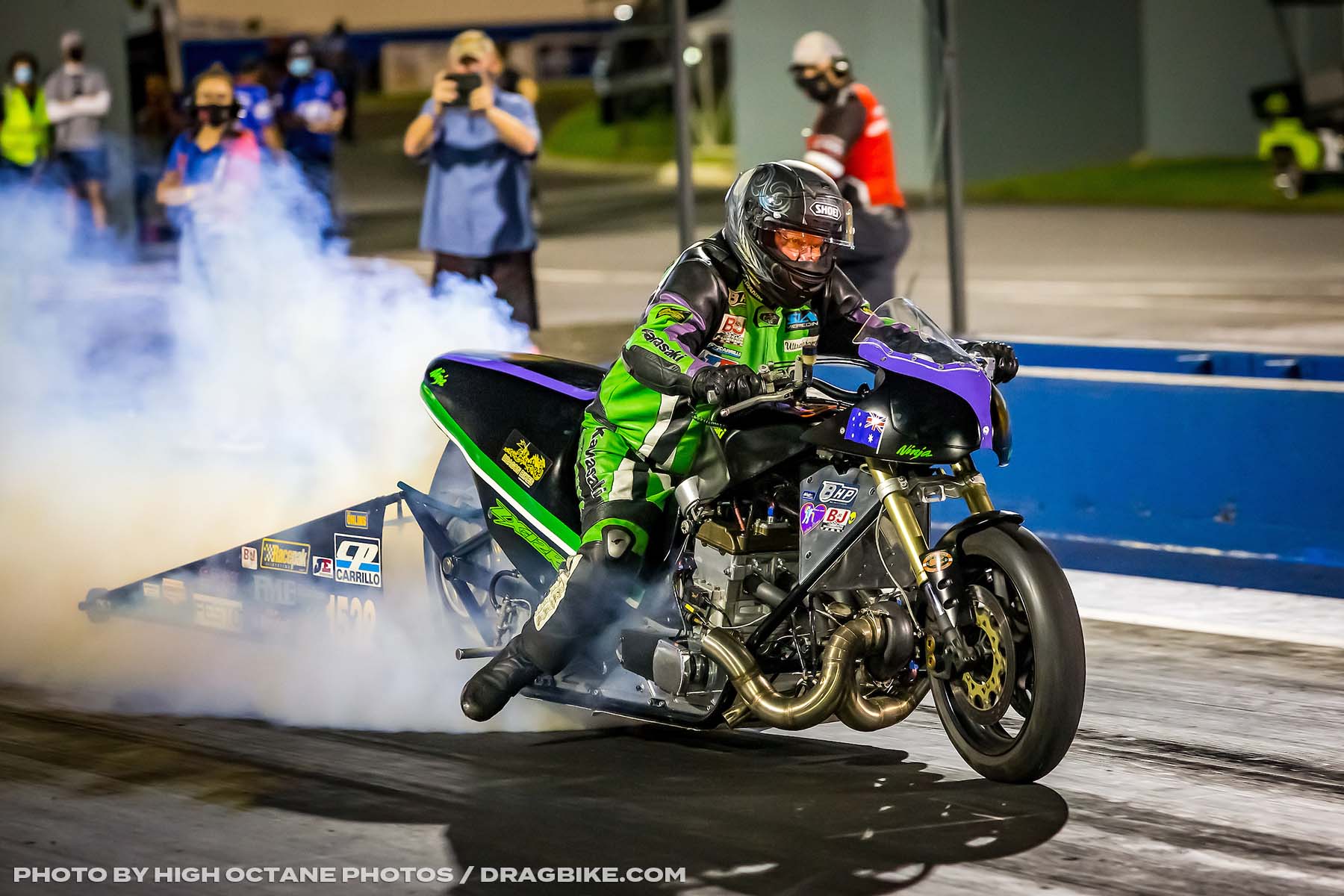 A full field of Top Fuel Motorcycles will contest the finale, which will also host the last round for the 2021/2022 WA Drag Racing Championships.

Durack is feeling quietly confident ahead of what is set to be an action-packed two days and nights of racing, leading both the ADRC points standings and also the WA State Championship for the Nitro Bike title.

“I am feeling pretty good. It is really pleasing to see a big field of eight entered after a full year of pretty good fields,” Durack said.

“It is great to be leading the points, and I am really looking forward to testing myself against the tough competitors that have entered for the Grand Final – with racers like Jay Upton, Chris Matheson, Wayne McGuinness and more, we are going to have some of the hardest hitting guys out there this weekend, so I am going to have to have my wits about me!

“We have had a few issues with the bike at the last couple of events, but I think we have pretty much addressed all of those now and we are looking forward to going out and running some good numbers – hopefully we can get back to the six-sixties that we were running before and perhaps even improve on that, that is what we will be aiming for.

“When it comes to the title, you can never take anything for granted in this business! We will be trying as hard as we can of course and hopefully the cars will fall our way. There is no doubt Ricky will be doing the same. He can be a wily old fox sometimes so we will have to be on our game,” he grinned.

“It would be absolutely fantastic to take it out and an amazing reward for all the hard work we do behind the scenes and all my crew does. We will certainly be tested though with the field we have lined up.

“In the meantime, thank you to my brother Jeremey who has been with us for a lot of years now, my sons Cameron and Scott, my wife Kimberly and our sponsors and supporters Clyde Carstairs from Bravo Resources and Dragon Bikes; Gavin Forbes from FME; Grant Bojanjac from Per4manz Turbochargers; and also, Lou Cotter.

“Thanks also to the Perth Motorplex team who have always been great supporters of Top Fuel Motorcycle, to Ray Treasure and his team, and to all of my fellow competitors – I am looking forward to seeing you all in the other lane this weekend.”

Durack isn’t the only one who has been battling bike gremlins lately, with Ricky Wood now racing against time to have a new engine ready for the big decider. 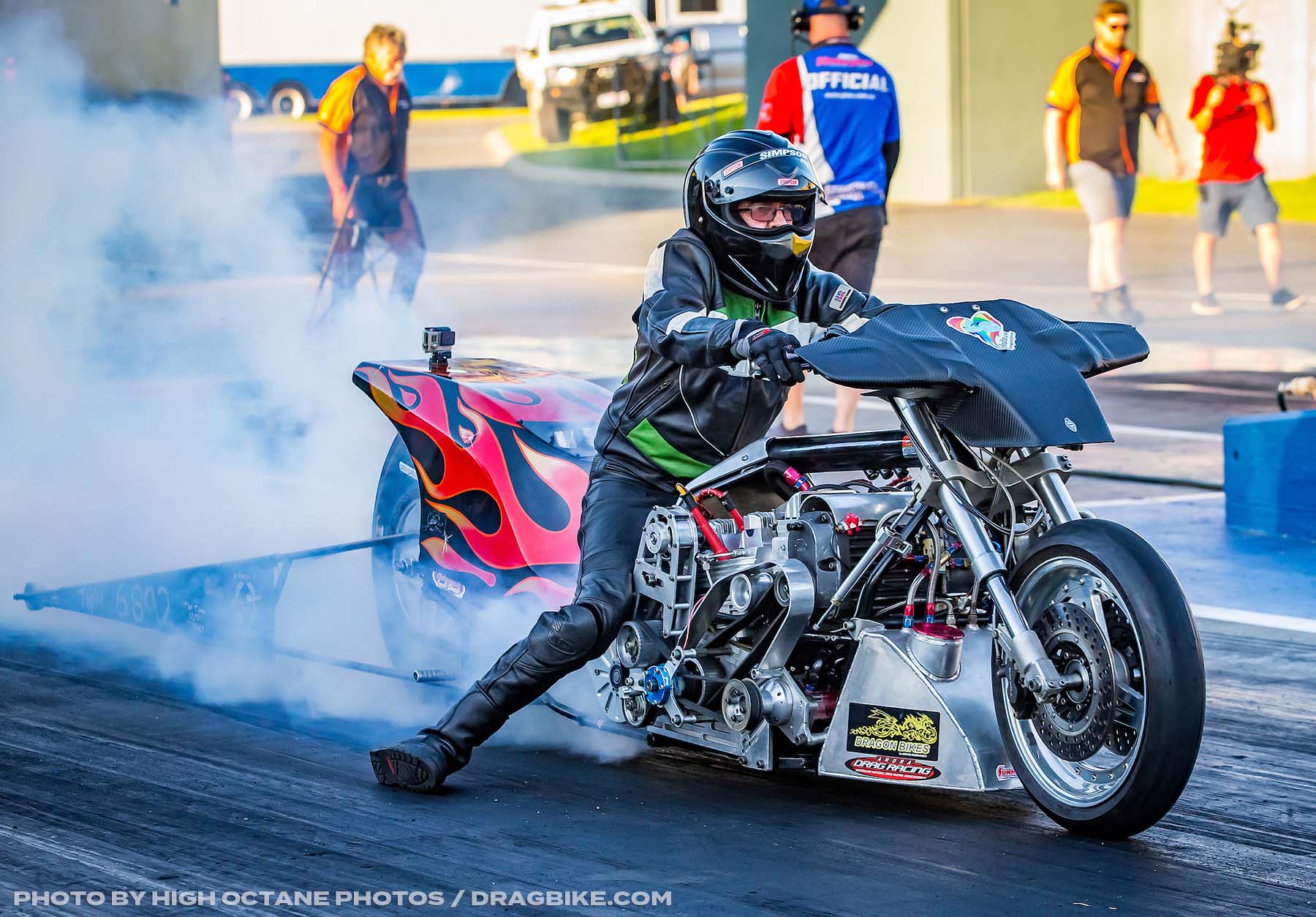 “Mathematically it is definitely possible, but we have been hurting the motor lately breaking conrods, so we are operating at an absolutely frantic pace at the moment to build a new engine, even taking two weeks off work to concentrate on the bike,” explained Wood, who added his Team Wood Transmissions clients have thankfully been very supportive of his pursuit of the title.

“We are putting together a whole new motor for the Grand Final. We have been using the late Steve Murray’s bottom end that used to race in Top Fuel Motorcycle in the Ravenswood days, but we have worn the crank out so now we are putting in a new Puma crank and building new crank cases for it.

“To come second would be awesome; to win the title would be just unthinkable, it would be like a dream.

“Thank you to Galloway Engines for helping with the machining, to Team Wood Fabrication for making the new sump and crank case and welding, Rory Taylor for helping us out with fuel and oil, Matt Abel, Dicker’s Speed Shoppe, Team Wood Transmissions, and my crew – Ralph my crew chief and Neil, Connor, Tony, Stewie and John.

“It is going to be great having a full field of eight bikes, even Ian Ashelford has entered on his Harley, and he hasn’t raced for years. It is just great to see him bringing his bike out and I can’t wait for the weekend.”