The final round of the 2018/2019 Summit Racing Equipment Sportsman Series at the Perth Motorplex brought to a close an intense season of racing at the weekend (April 6/7).

At the end of two big days of on-track action, both season champions and event winners were celebrated with plenty of ANDRA Christmas Tree Trophies being handed out along with the prestigious John Storm Memorial Trophy.

In Modified Bike it was Chris Moore who took out the event win over Bruce ‘Budgie’ Jones, after enjoying a bye run in the semi-finals and earlier victories over Chris Morgan (quarter-final), Zoe Nieuwhof and Christopher Fryer.

Jones suffered a heart-braking failure on the startline in the final after having earlier emerged victorious from battles against Luke Seaton (semi), Tom Gartrell, Chris Allen and championship runner-up (and 2018 title winner) Bryan Finn. The bracket’s winner of the Top Qualifiers Medallion, thanks to TileCo-TheShowerPeople and KC Tools, Trent Anthony, enjoyed a bye to the second round where he was defeated by Seaton.

Championship getter Hamilton-Moderate made it through to the third round before being eliminated from the event proceedings, however you still couldn’t wipe the smile off his face as he had earlier been confirmed as the Summit Racing Equipment Sportsman Series Modified Bike Champion.

“There was a bit of hard work for us on Saturday, we had to change a clutch out, but it all came to the party on Sunday,” Hamilton-Moderate said, while thanking his wife, kids and family as well as sponsors Aus Dig, ModCon Civil and “everyone that makes the event what it is.”

“At the last ANDRA Grand Final my wife said to me, ‘you have to win me one of those,’ so it was good to be able to back that up.

“Saturday was a bit of a nightmare, but it all came through when it counts and it definitely means a lot to take the championship out.”

It was a troubled run to the top for Rob Cassar, who took out his first Summit Racing Equipment Sportsman Series Competition Bike championship on a tie break with runner-up David Willis.“We broke the motor in the pits before the first round,” explained Cassar. “We warmed up in the pits and broke the engine, we had David Willis in the first round and I had an hour to put an engine in. We had never run that motor before and we said, ah well, let’s send it!

“In that run it sort of creeped through the water, and I thought that was going to be it, championship over. In the next round I said I am not doing a burnout, and it surprised me! In the next pass I thought I wouldn’t do the burnout again and we went 7.43s at 170-something mile per hour and I thought, wow!

“I have to than my crew and everyone that chipped in, my wife, and everyone for coming over. I would also like to thank Ballistic Performance, Denso Auto Parts Australia, PowerPlus Racing Fuels, Shinko Tyers Australia, Nolan Helmets Australia, Lectron Carbs Australia and Lucas Oils. And also all the guys in the US who helped us out when I broke what felt like everything on the bike at the last round!”

Brett Ghedina took out the event victory following his top qualifying performance the day before, and also reset a national record in the process (further details to be released later this week).

Also recognized at the ANDRA Grand Final presentations was Tasmania Supercharged Outlaws competitor Mike Evans, who was awarded the ‘Longest Distance Travelled’ trophy while Brett Ghedina received the Crow Cams Best Engineered Award. Special mention was also given to the Summer Slam (won by John Zappia), Nitro Bike (A final won by Benny Stevens, B Final by Wayne McGuinness) and Top Alcohol racers who also put on a fantastic show this weekend. 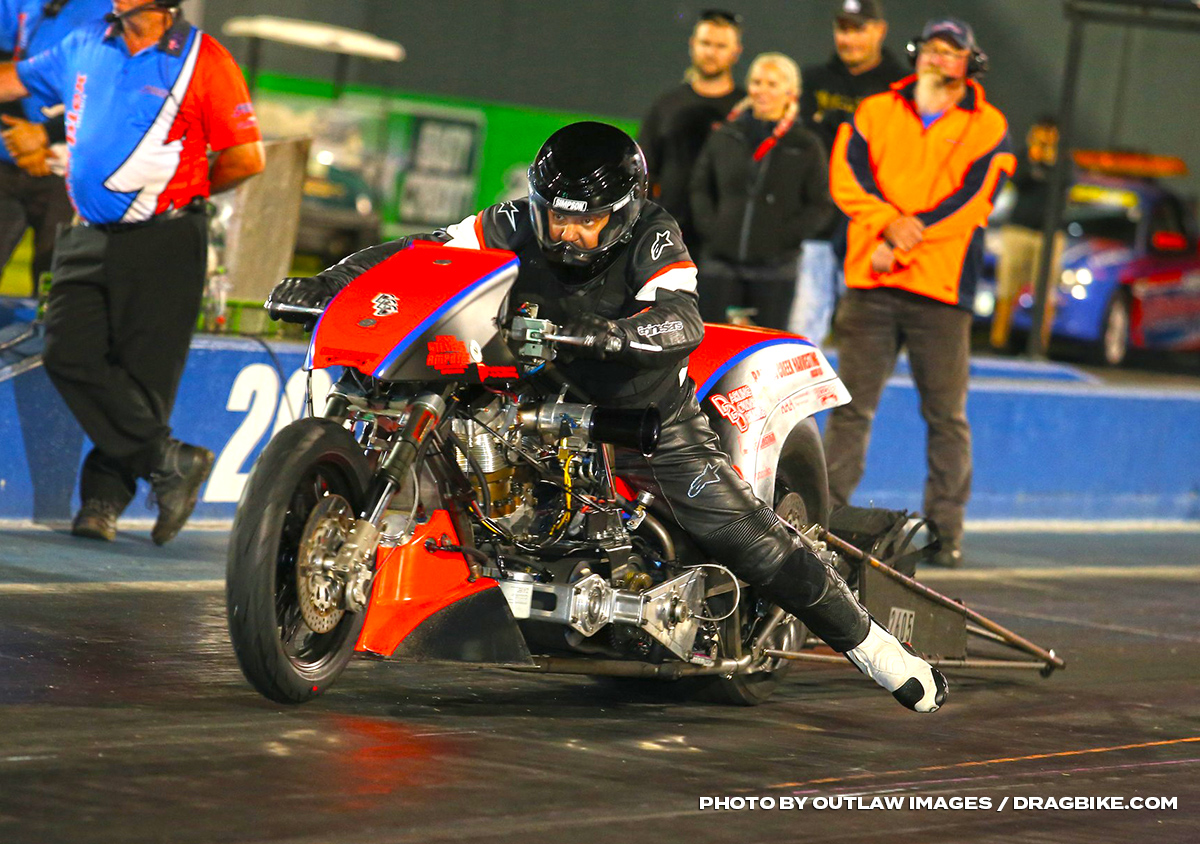 Just one day of racing is all that remains for the 18/19 Summit Racing Equipment Sportsman Series, following the conclusion of day one of the ANDRA Grand Finals event at the Perth Motorplex this evening.

While a number of racers will have their eyes on a championship tomorrow, for Putland it is all about chasing a national record, and maybe an event win while he is at it.

“Today went spectacularly well – we thought it was going to go fast, but not that fast! Sometimes you win and sometimes you lose, so that was a very good win!” said Kalamunda (WA) racer Ghedina.

“Tomorrow it will most likely come down to the person that makes the least mistakes will win, it is often the case for our level of racing! If you don’t make a mistake you will be pretty well set, you just have to make sure you make less mistakes than the person you are racing.

“We are feeling reasonably confident having the top qualifying spot, but we are still doing a lot of testing with this motorcycle so I haven’t really been focusing on my start line reactions. So even though I top qualified by a massive margin, I kind of give that advantage away on the tree at the moment. We will just see how it goes tomorrow and keep turning it up to make it go faster!

“In the meantime I have to thank my dad Guido for picking up a simple problem with the bike which we had overlooked for four race meetings – we made an adjustment on what he saw and hey presto, it works! My thanks also goes to Trev and Jason for their help on my crew – without these guys this doesn’t happen.”