Brian Hotker is currently fourth in the 2019/2020 Summit Racing Equipment Sportsman Series Modified Bike standings following victory at the Goldenstates and a runners-up result at the Westernationals.

The 65-year-old Fellow of CPA Australia and CAANZ member started his drag racing career just over 11 years ago. Now, the recently retired accountant is eyeing off a move to the Competition Bike ranks while he anxiously awaits a return to racing.

“In 2009 I had just purchased a bike after having not had one for 30 years and my good mate, Wayne Patterson, suggested I join him at an All Bike Day at the Perth Motorplex,” said Hotker, who retired at the start of the COVID-19 pandemic.

“I had been a spectator a few times but had never been close to the track. I started out with a Ducati S4RS Monster and my very first burnout ever in my life came as I lined up for my first ‘lap’ down the track. 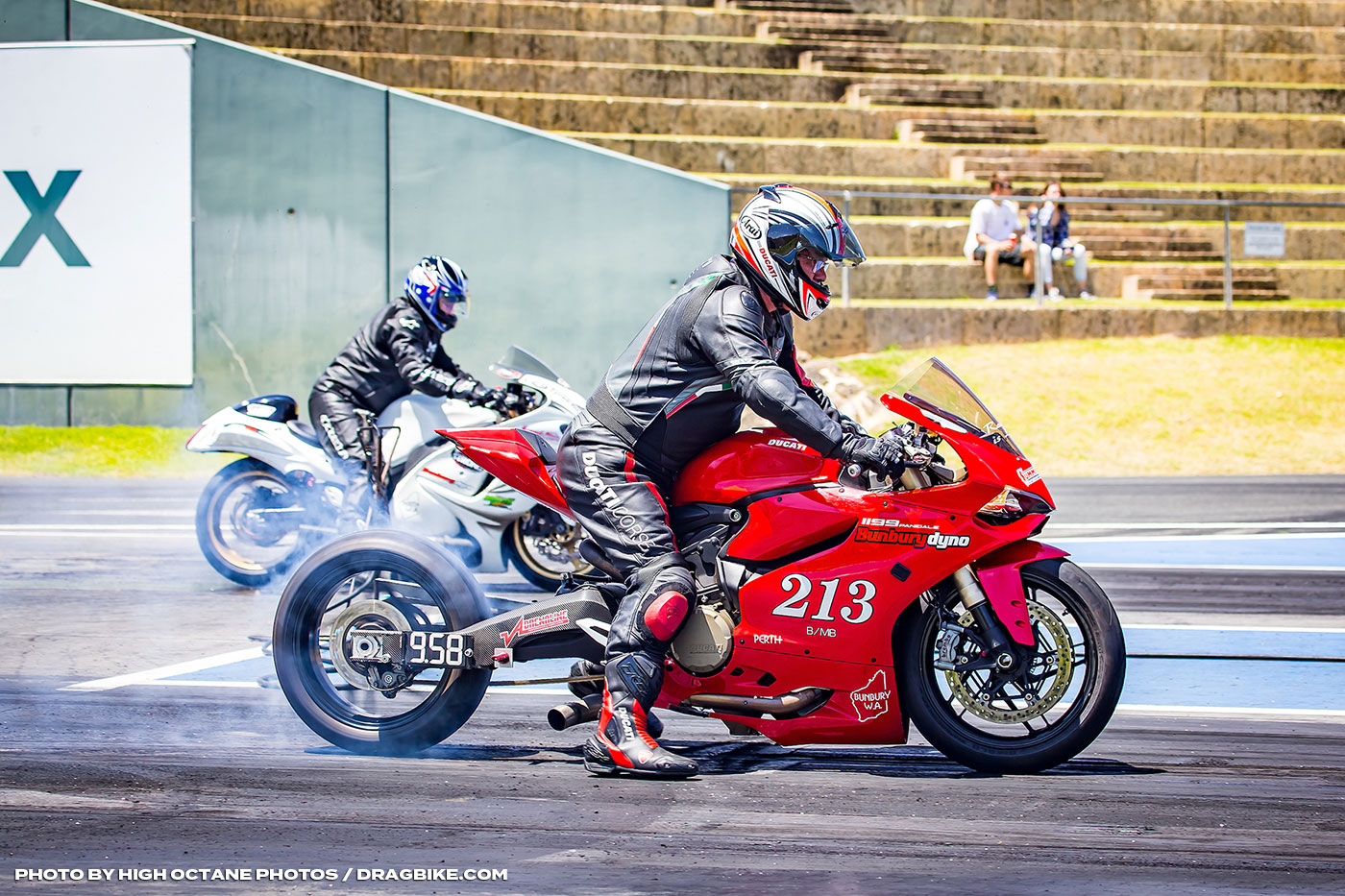 “It was such a buzz that I was instantly hooked and at the age of 54, I started my drag racing career!

“Over the enforced break my Ducati Panigale has pretty much just been sitting in the shed – it doesn’t require a huge amount of maintenance. However, Sean Arthur of Adrenaline Performance has been building me a pretty special Comp Bike to run in DD/CB, based around a Ducati 848 motor with a turbo in a wheelie bar frame.

“This project has admittedly been going for a few years, but he promises me that it will be on track for when the season starts up again. I am pretty excited about that!”

While he looks forward to joining the Competition Bike ranks, Hotker has plenty to say about his time in Modified Bike both this season and in seasons past.

“The Goldenstates was our first meeting of the year so I was chuffed to finish up winning that event. When it comes to the Westernats, it is the biggest event in the West where everyone comes out to play, including some of our friends from the other states. It is great to catch up with them each year and the extra competition is fantastic, so to finish that event as the runner-up was a huge thrill,” he reflected.

“To be sitting fourth in the points is unexpected and unplanned for as I really had not considered chasing the Australian rounds this year, especially as in previous years we had travelled to Darwin and Alice Springs and competed in National rounds without much success.

“My favourite moment this year would have to be being confirmed as the winner of the WA Championship at the Perth Motorplex and also being named the Motorplex’s Rider of the Year. I feel very honoured to have received these awards!

“There have been plenty of highlights over the years as well. The main ones would have to be the road trips we have taken – camping in our Fiat van and taking our time to get to our destinations so we can see a lot of the country and meet up with some interesting characters.

“The best trip would have to be from Darwin to Alice Springs, with a few rest days spent at the Mataranka Homestead, in the thermal pools. Another stand-out moment would have to be when we had the chance at Alice Springs a few years ago to entertain the Chief Minister, even getting him on the bike and firing it up for him!

“Group 3 racing is to me, the most even form of drag racing. It does not rely on who has the most money, basically anyone can compete and have a huge amount of fun relatively inexpensively. It does not matter how fast you are, instead it is all about how consistent you are. It is very competitive too with exceptionally close racing; I have been beaten by thousandths of a second and won by thousandths of a second.”

Hotker is primarily self-funded but he still has plenty of people he wishes to recognise for their support.

“My family are not really into drag racing but they are supportive; while Todd Patterson and Wayne Patterson of Bunbury Ducati help me out a lot with servicing and parts as well as encouragement,” he said.

“The Motorplex staff do a really special job, led by the extraordinary Ray Treasure, and they need to be recognised. It is truly the best place in the world to race because of their dedication to the sport.

“My thanks also goes to Brett Stevens and the ANDRA staff for their good work as well and the support of Summit Racing Equipment is also invaluable in keeping Sportsman racing alive and well.”

The ANDRA Grand Final is currently postponed due to COVID-19 restrictions. ANDRA hopes to host the event later this year on dates to be confirmed. For more information, visit www.andra.com.au