HomeSanctionsANDRA / 400 ThunderANDRA : Lamattina does it again in Stifling Conditions at Perth Motorplex

ANDRA : Lamattina does it again in Stifling Conditions at Perth Motorplex

It was hot tonight at Perth Motorplex, very hot! But despite the heat the ANDRA Drag Racing Series top fuel and top fuel motorcycle lit up the crowd while the Aeroflow Sportsman Drag Racing Championship competitors were just happy for dry conditions after the rain out at Portland last weekend.

Early on the Motorplex crew did their best to reduce the track temperature with an early evening spray from the water truck bringing the surface down to a nice and balmy 49.8°C by race time after recording of 62°C on the thermometer.

As the surface temperature slowly dropped, it was the Lamattina show once again with the Fuchs dragster powering to an impressive win for his second ANDRA Silver Christmas Tree in as many nights to continue his great run out West.

Lamattina said he was very happy for back to back wins, particularly in trying conditions, and a big lead in the ANDRA Drag Racing Series. 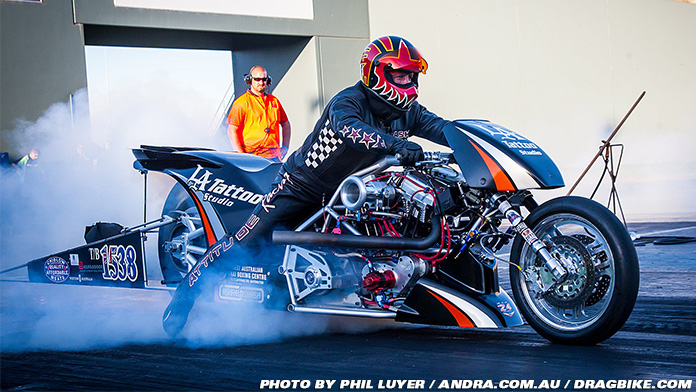 “What can I say? The car was running consistent again tonight and crew chief Aaron Hambridge showed that he can adapt to different conditions which is great for the Fuchs Top Fuel Dragster Team. And to come out with the points lead it’s great,” he said.

“The track itself, for how hot the day was, held up beautifully. But you’ve got to take your hat off to the Perth Motorplex crew. They manicure it, keep teasing it and have a look. It came up trumps.”

Martin Stamatis went into the fours during eliminations with a 4.830 defeating Allan Dobson who flamed out across the finish line and Phil Lamattina sent his Fuchs dragster down the track straight as a dart with a 4.666 in his solo run.

The final eliminator saw flames once again for Sheehan and Damien Harris but the 5.256 was enough to see Sheehan into a B final he would unfortunately never get to stage running out of bullets in a costly night.

The stage was then set for Lamattina v Martin Stamatis in the Top Fuel A final. Stamatis pedalled out and could only look on as Lamattina took the win with a pass of 4.74.

Unfortunately it wouldn’t be two in a row for Mark Drew as the A Final went to Mark Ashelford running a 6.58 while Chris Porter frustratingly crossed the centre line. B Final action ended in a solo run with Crawford’s bike spitting out two spark plugs in the start-up area resulting in a win for Kevin Gummow running 7.67.

Ashelford said he was more than happy with the win after finishing as runner up on Friday night that included his first two full passes after a recent hiatus. Tonight he went one better, dedicating the win to his mother.

“My dear old mum recently passed away so this weekend was for her,” he said.

“Last night I had a shakedown and it was my first two full passes in a couple of years. Tonight I had a hiccup in the seeding round and was lucky to get in the field. I faced Drewy again who I raced last night for the final and then Chris Porter, he’s not the Australian Champ for nothing so I really had to put my A cap on.”

Mark Drew continued his impressive form early in Top Fuel Motorcycle qualifying in first with a 6.726 while Ashelford shut down after the burnout. Terry Burnett also had trouble with the airline and unfortunately the problems would persist to put an end to his night during eliminators.

There was a hairy moment for Dennis Grant in the eliminators with a heavy lean to avoid the wall but he just kissed the concrete before the finish line earning a DQ. That left Chris Porter (6.905)and Mark Ashelford (6.908) to run a pair of sixes putting themselves into the A final leaving Kevin Gummow (7.641) and Gordon Crawford (7.358) to fight it out in the B final.

Fans also got to see Round 2 of the Aeroflow Sportsman Drag Racing Championship.

Ross Smith took the honours in Competition Bike running 8.59 on a 8.74 against a 10.54 on a 10.26 for Stan Lisle. Craig Gerdes found himself on the wrong side of the tree in the Supercharged Outlaws final with Greg James claiming victory with 7.35 on the 7.34.

Mike Lanigan was left sitting at the line and could only watch Sam Treasure take the Modified final with a very nice 7.67 on a 7.66. There was a long pre-stage duel in the Super Sedan final only to see Matthew Gullotto red light handing the win to Leigh Fallon posting 9.23 on a 9.25.

The Modified Bike final was won by the consistent Luke Nieuwhof running a 9.64 on an 8.45 from an out of sorts Justin Townson posting a slowing 15.26 on an 8.88. Nicholas Wroe fouled out in the Super Street final won by Craig Caton with a pass of 11.04 on the 11.19. Finally in Junior Dragster, Makenah Begg got the win over a red lighting Jasmine Slamar.