SMALL BUT MIGHTY: LES HOLDEN IS READY FOR WESTERNATS CHALLENGE

Les Holden might be riding the smallest cubed bike in the field at next weekend’s 2022 MacTrack Westernationals, but that isn’t stopping him from having big aspirations heading into the prestigious event at the Perth Motorplex.

The MacTrack Westernationals will host the latest round of the Summit Racing Equipment Sportsman Series (SRESS), as well as the Australian Drag Racing Championship (ADRC), and the Motorplex’s Nitro Slam series across March 5 and 6.

Holden has claimed the ANDRA Christmas Tree at the event before – in Modified Bike – but with his Top Fuel Motorcycle up for sale, a win in the group one bracket next weekend would be very special for the 61-year-old.

“It would be lovely to win, it would just mean everything for the team to win at the Westsernationals and take home an ANDRA Christmas Tree. The bike is up for sale and so this is probably the last Westernationals I will be racing, so a win would be very special,” Holden said. 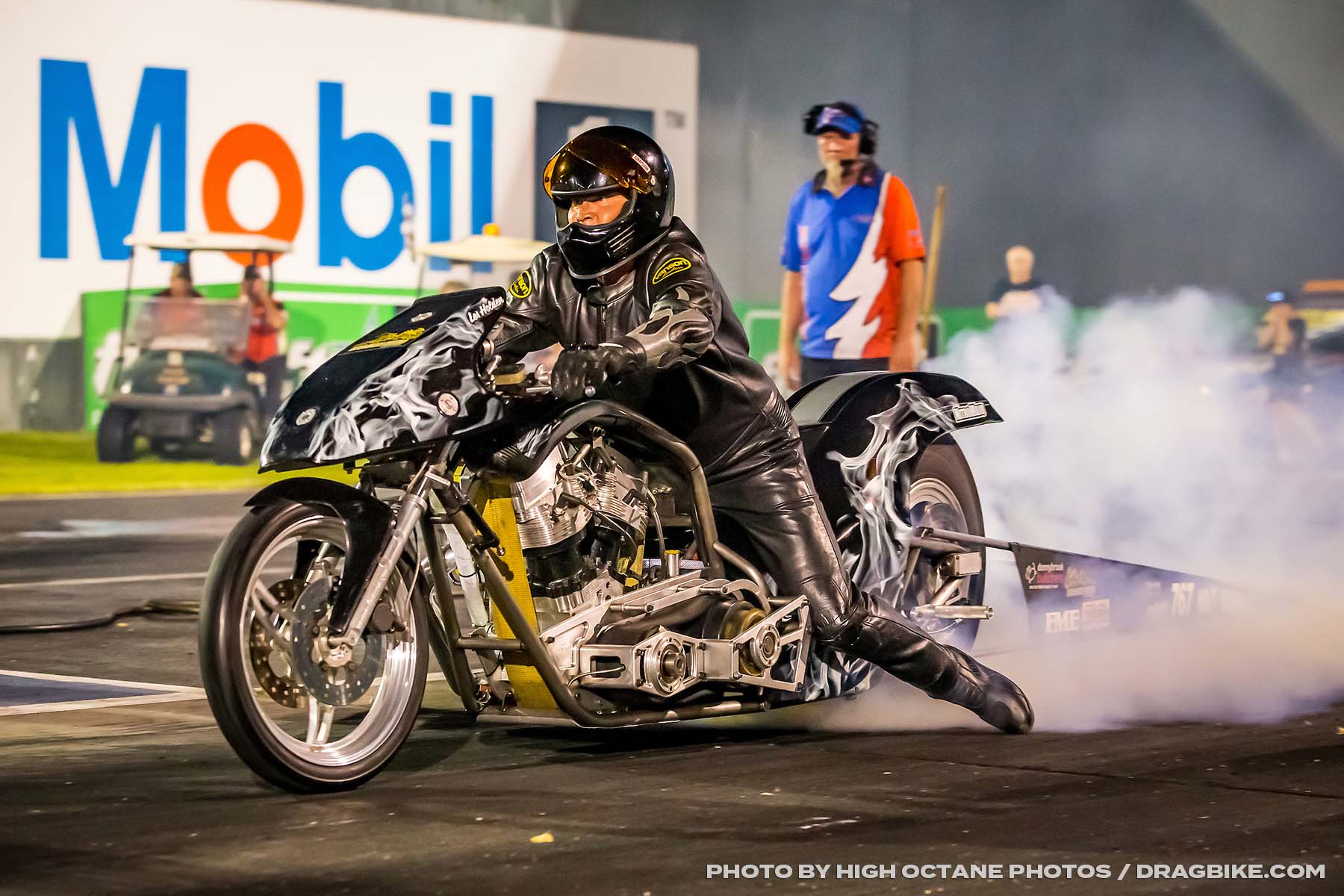 “Our first goal will be to get into the finals, and then we will go from there. There are five Top Fuel Motorcycles taking part, and it is always going to be tough being the smallest cubed bike in the field, so we will have to be on our game and make sure every pass is clean.

“I wanted to learn how to race Nitro, so choosing the 120-cubed carburetted nitro Harley as a stepping stone was the way to go. Racing with Nitromethane fuel can be dangerous and hit and miss on the tune so you must be able to take in the data and consult with experienced racers. I have just enjoyed the challenge so much and stayed with this combo because of the consistency of the racing.

“We also don’t damage too many parts each season, which makes it a little more economical – if that can be said of Nitro drag racing,” he chuckled.

“We are anticipating a good track and some good air at the event, so hopefully we will be able to make the bike a bit more powerful and see if we can challenge for a victory!”

The Westernationals event is a favourite for Holden and his crew.

“We really do like the two-day events. We camp out with my crew and have a great time, and having qualifying on a different night to the eliminations really helps you work for a good tune for the weekend,” he said.

“We haven’t gone too badly at the Westernationals in the past – in Top Fuel Motorcycle we have gotten through to the semis, but not to a final yet. So, we will be doing everything we can to be on our A game.

“This is one everyone wants to win, because it is the Westernationals, so we will be throwing everything at it.”

Holden has been racing since 1983, starting out at Ravenswood and going on to win the WA Modified Bike Championship in the Perth Motorplex 2005/2006 season and then the WA Top Fuel Bike Championship in 2015/2016, after getting his start in the group one bracket in 2013.

“It is time to pass the fun onto someone else now, so the bike is up for sale,” the Quinns Rocks (WA) racer said.

“I have really enjoyed the category – the difficulty of racing with nitro makes it a real challenge, and heads up racing is just great. I have raced group three and group two over the years, but heads up racing is something else entirely and we have had some success despite being behind the eight ball thanks to being consistent.

“It would be really good to see the Top Fuel Motorcycle category growing throughout Australia – there are a lot of bikes sitting in workshops that need to be dusted off and brought down the track and I would really like to see that happen around the country and especially at the Perth Motorplex.

“The Motorplex is the best drag racing facility in Australia as far as I am concerned, the track staff are awesome, and my thanks goes to them for all that they do.

“I also want to thank my crew – Guy, Martin, Graeme, Baz and Kim – and my sponsors, Ranch Automotive Engineering, Liberato Lubricants and Donnybook Butchers. The encouragement I have received from my family over the years has been great.”

The 2022 MacTrack Westernationals will be held at the Perth Motorplex across March 5-6. For more information, visit www.motorplex.com.au