Matheson who wowed fans last year at the same event said he was champing at the bit to blast down the track. 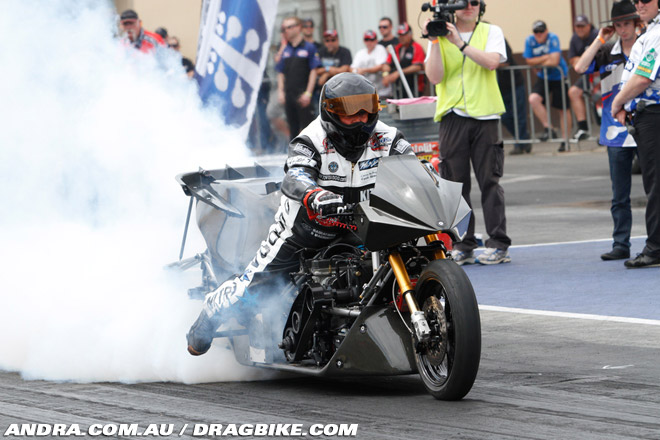 Matheson suffered multiple injuries, but not enough to dull his enthusiasm for the illusive 5 second barrier, yet to be achieved in Australia on a motorcycle.

“We have a new, improved Fuel Bike, which has the potential to break into the five second zone, we just need the moons to align to do it. We have run multiple six 0’s, but need to lean a little harder to achieve our goal. All the conditions including track surface, air temperature, wind direction all need to be right to give us the opportunity to run quick.”

Chris Porter of Bad Bones Racing will pair up with Matheson to maximise fan excitement. Porter, no stranger to Top Fuel Motorcycles is current Australian Champion on his V-Twin Nitro Harley and will be gunning for Matheson’s Santos Extreme 3 crown.

Porter dominated the 2013 Championship, with consistent fast racing throughout the season. His Fraser Motorcycle sponsored machine has undergone a series of upgrades for the 2014 season, combined with Porter’s killer reaction times, will be motivation for Matheson.

The Santos Super 3 Extreme Drag Race will be held at Willowbank Raceway, Ipswich on April 18-19, 2014.