Sydney Top Bike rider Chris Porter is fully engaged in nitro warfare with drag strip rival Chris Matheson as the season reaches its mid-point at the 2013 Nitro Champs at Sydney Dragway on May 3-5.

Porter is leading the points battle over Matheson but the Queensland is quickly closing the margin and recently recorded Australia’s quickest ever time on a motorcycle.

Porter is unphased though and is concentrating on making his own Fraser Motorcycles nitro Harley as good as it can be in preparation for the confrontation. First that means finding the consistency the team formerly had.

“We had a run of passes where we’d go good one and then terrible the next,” he said. “At the last round in Adelaide we got through qualifying, then blew a piston in the semis but got to the final where we launched with the lead but dropped a cylinder at 300 feet. 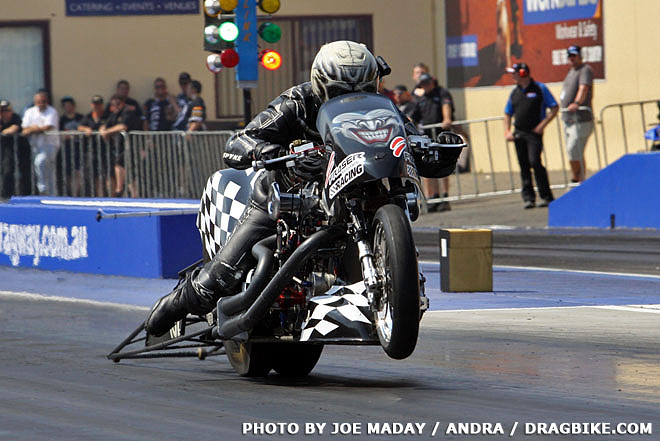 “For the Nitro Champs we want to be consistently in the sixes and our big target is 220mph (354kph). We’ve changed the gearing and have some new clutch plates from Nick Boninfante in the USA so hopefully that will produce the results we want.”

Despite the at times frustrating development of the motorcycle, Porter said the team are making moves forward and have some new equipment ready to go.

“We’ve made gains by learning more about the tuning of the bike, particularly in the clutch area, which has benefited our 60 feet (launch) times and our speeds,” he said.

“We have the same fuel system as the US guys so now it is just about finding a track that will hold it. Sydney Dragway has been the most consistent surface we have found so we are going to throw all we’ve got at it and see what it will hold.”

Top Bike will be one of three nitro categories at the Nitro Champs, backed up with Top Fuel and the wild Funny Cars.