Queensland’s Chris Matheson will be aiming for an impressive fourth championship in a row come this season with his Nitro Voodoo Top Bike team, which kicks off next weekend at Sydney Dragway.

Matheson is no new comer to high horsepower or speed, having competed at Bonneville in an ex-NASCAR Ford Thunderbird and closer to home at Lake Gairdner in South Australia on a number of occasions.

But he says nothing is like the 1500 horsepower nitro motorcycle he rides.

“The buzz you get from raw horsepower and big speeds is unparalleled in anything I have experienced in my life,” he said. “Nothing comes close to the kick in the tail that you get from the nitro bike as it fires down the track.” 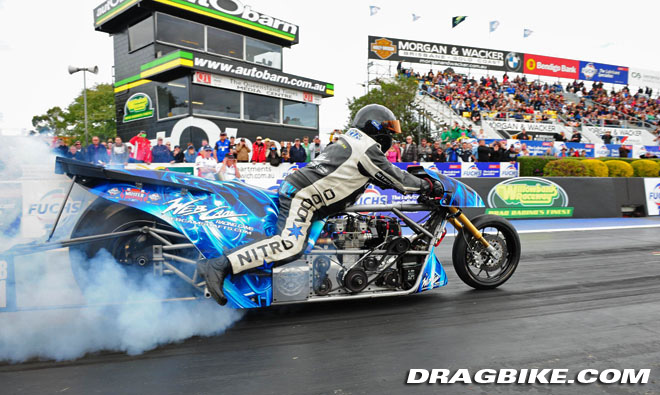 The Nitro Voodoo team have been busy in the off season, preparing the bike for a big year ahead.

“We have eight rounds this season, almost double what we had last year, with a couple of new tracks in the mix, which should be great,” Matheson said.

“We tested a few weeks back, chasing a problem with lazy launches that plagued us for most of last season, but we are confident that crew chief Roger Bloor has found the bug.”

Matheson is also growing more confident in the bike’s handling under braking, which had previously made for some nervous moments as he topped 350kmh.

“The bike is handling like it’s on rails and is a dream in the braking zone, which is being reflected in our increase in speed in our results,” he said. “We had handling issues for over a year, which was a tough time, especially knowing that the bike was going to be a huge handful in the second part of the run.”

Matheson and Bloor have just returned from two weeks in America, spending quality time with Steve and Larry “Spiderman” McBride, renowned as the world’s foremost authority on Top Bikes.

Matheson will be joined by Chris Porter, Phil Parker, Graeme Morell and the dangerous Gavin Spann in the opening round of the championship at the Australian Nationals at Sydney Dragway from November 2-4.