2013 Australian Top Fuel Motorcycle Champion Chris Porter was left feeling disappointed after round one and two of the ANDRA Drag Racing Series at Perth Motorplex.

The Aussie #1 sits third in the standings after winning the B Final to finish third overall in round one on Friday night before going all the way to the A Final and a runners up position in round two on Saturday.

Porter said the bike was feeling good all weekend until that final pass when the nitro Harley launched hard and veered to the right taking out a marker in the process.

“We still don’t know why, we’re waiting to see the TV footage,” he said. “But considering the heat the bike performed well and we only bent four pushrods.” 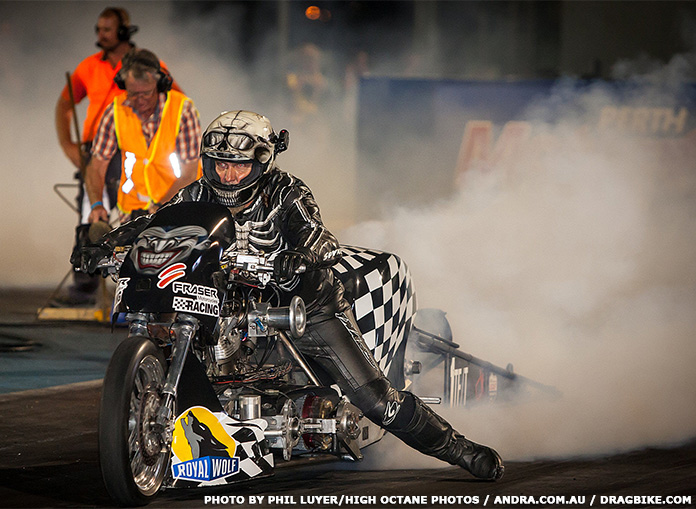 “I was really disappointed because at the time I hit the 660 marker in the final I’d closed the gap to .006 on Mark.”

“It would have been a good race as it was the first time we have run against each other.”

This season Bad Bones Racing welcomes three new sponsors to the fold as Lucas Oils Products, Royal Wolf Containers and Duncan Foster Engineering join Fraser Motorcycles for what Porter is hoping will be a great 2014.

The team is using a new M/T tyre and fixed a recent problem with the Motec so race fans can expect to see a lot more power coming from the nitro Harley when he next takes the track in May.

“We’re looking forward to the Nitro Champs at Sydney Dragway, our home track,” said Porter. “We want to run some low sixes there and get some more points to keep the number one.”

Round 3 of Top Fuel Motorcycle of the ANDRA Drag Racing Series will take place during the Nitro Champs at Sydney Dragway on May 2-4, 2014.