ANDRA: Racers Delight as Westernats Draw to a Close

Racers Delight as Westernats Draw to a Close

The 51st annual MacTrack Westernationals hosted more than 180 racers over its two days, with the Summit Racing Equipment Sportsman Series racers and The Australian Drag Racing Championship (ADRC) putting on a host of stellar performances in the pursuit of coveted ANDRA Gold Christmas Trees.

Jay Upton meanwhile persevered through niggling issues all weekend long to hold on for the ANDRA Gold Christmas Tree over Greg Durack. 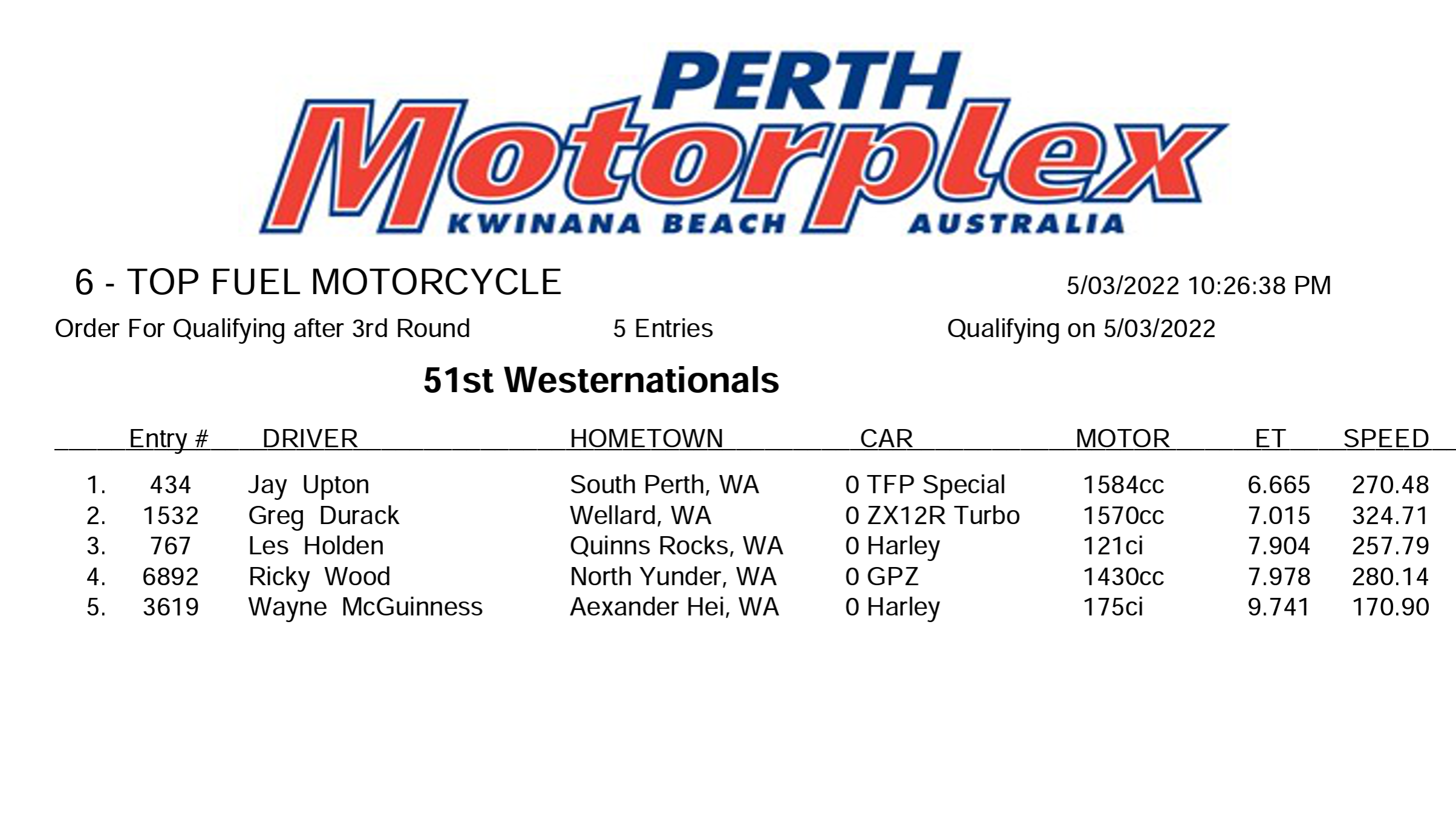 In Top Fuel Motorcycle, in the end Jay Upton – who also claims the Crow Cams Top Qualifier Award presented by Decoglaze Glass Splashbacks for the class – did enough to clinch the victory despite a number of obstacles throughout the weekend. He faced off against Greg Durack in the final after enjoying a bye run in the first round and having a solo in the semi when Ricky Wood was unable to front. Durack meanwhile raced Wayne McGuinness in the opening round ahead of a bye in the semi. 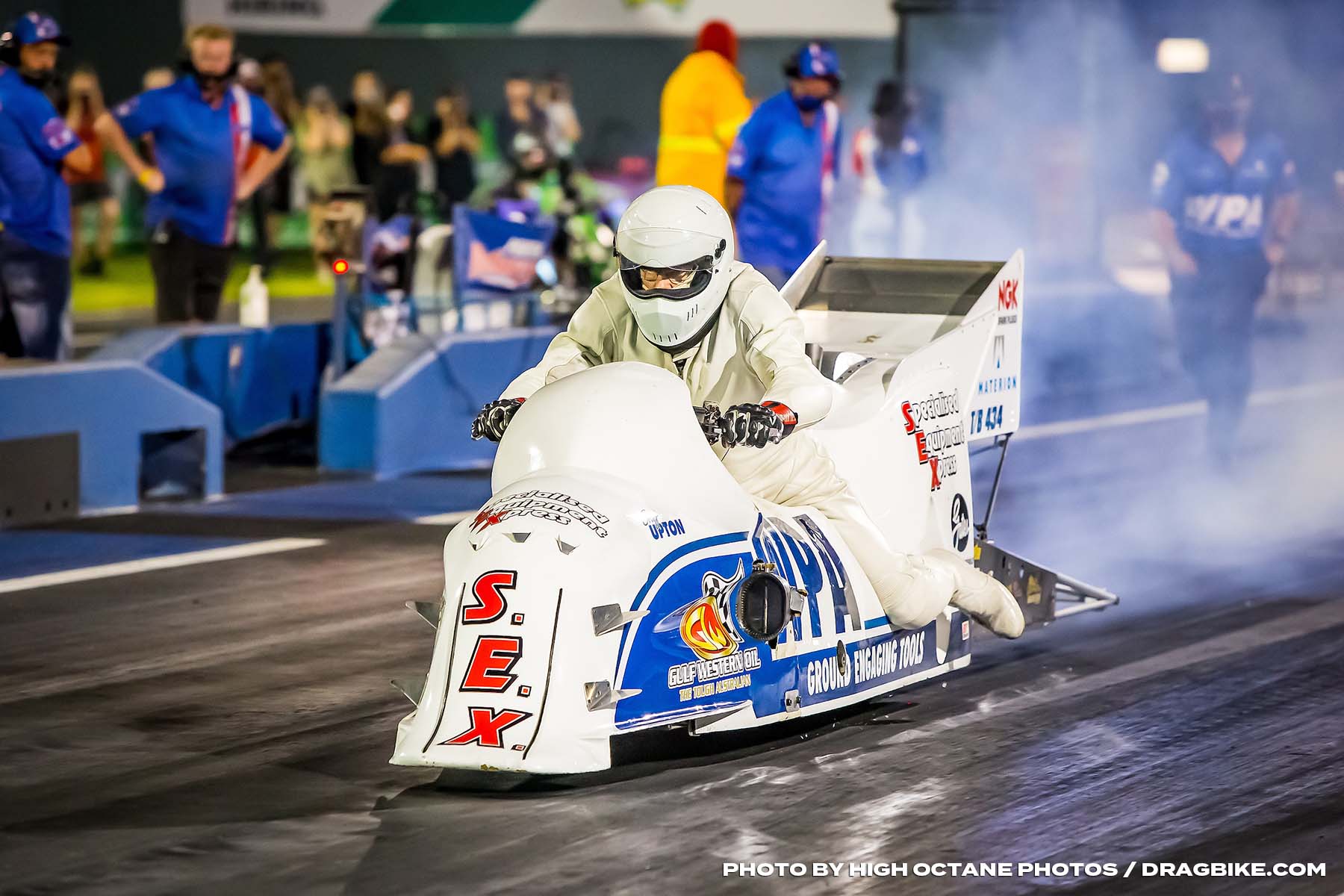 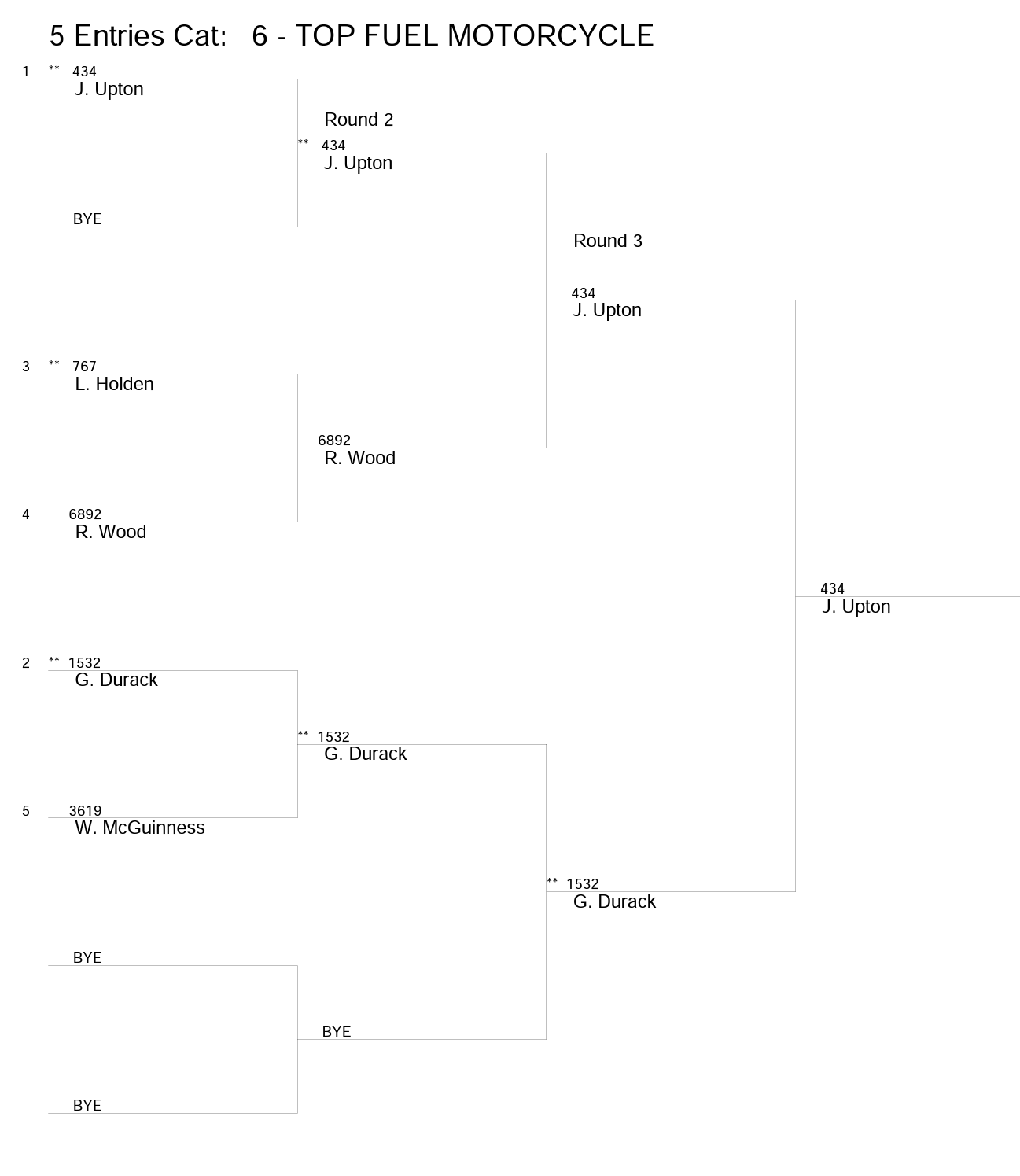 “That one was a bit messy, it was a bit of a Steven Bradbury win, but we will take it – and a holeshot at that, I didn’t even realise that until afterwards,” said Upton, who had the day before claimed the Crow Cams Top Qualifier Award presented by Decoglaze Glass Splashbacks. 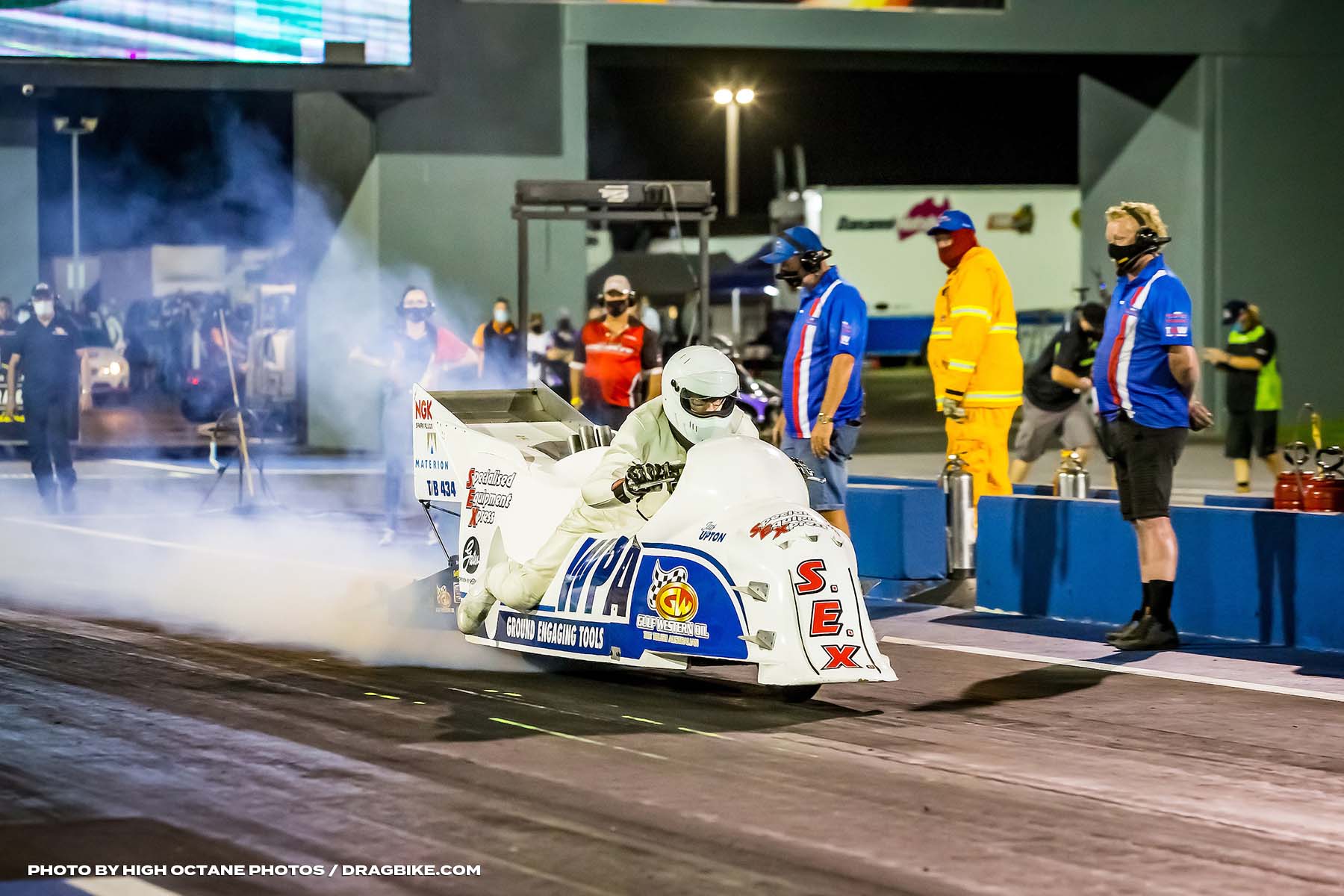 “The Westernationals is one of those really hard events to win, and we had a pretty torrid day with issues – we had a leaking rear tyre, we lost a blower belt in the second round, and we dragged the parachute in the first! It was a messy weekend, but even though it was slow we did what we had to do, and we got it done.

“I must say a very special thank you to my crew, they put in a really big effort today to get through the problems. We are building towards the ANDRA Grand Finals and hopefully now that we have learned where our problems are we can make some progress.
“Thank you also to our sponsors, Rare Parts Western Australia, Gates Belt and Hose, and Gulf Western Oils for their support; as well as the track staff and volunteers, and to all the race fans.”

In Modified Bike, Paul Nieuwhof snagged a lucky break when his opponent Luke Seaton broke-out after Nieuwhof had all but conceded the race with a breakage off the start line. Not realising Nieuwhof had struck trouble, Seaton pushed his bike all the way to the end of the track, breaking out in the process. 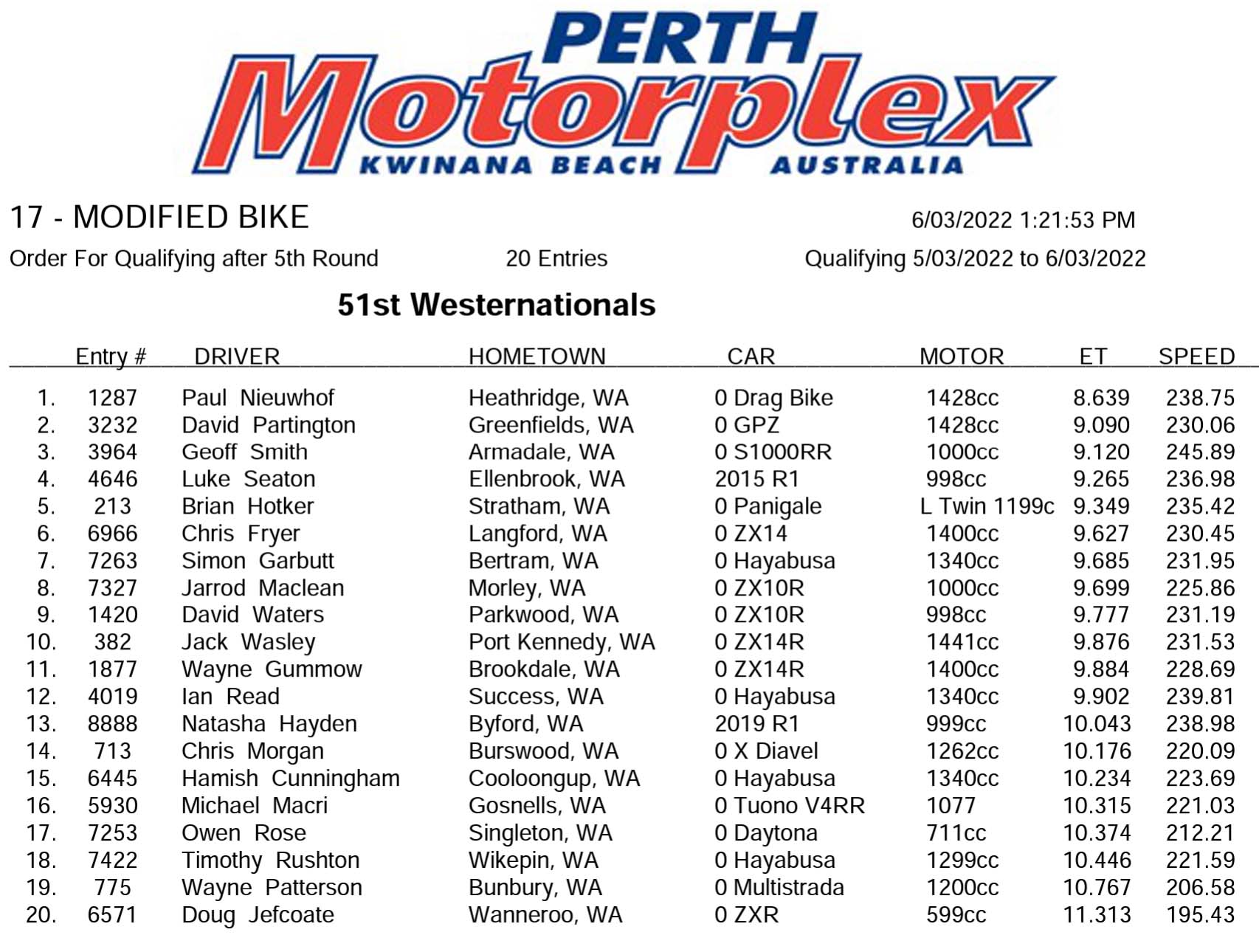 Nieuwhof – who was also the Top Qualifier for the bracket – went to the final against Luke Seaton after emerging victorious from battles against Wayne Gummow (round one) and Michael Macri before a round three bye, before defeating Brian Hotker in the semi-final. Seaton booked his place in the final with wins over Chris Morgan, Wayne Patterson and Ian Read before a bye in the semi-final. 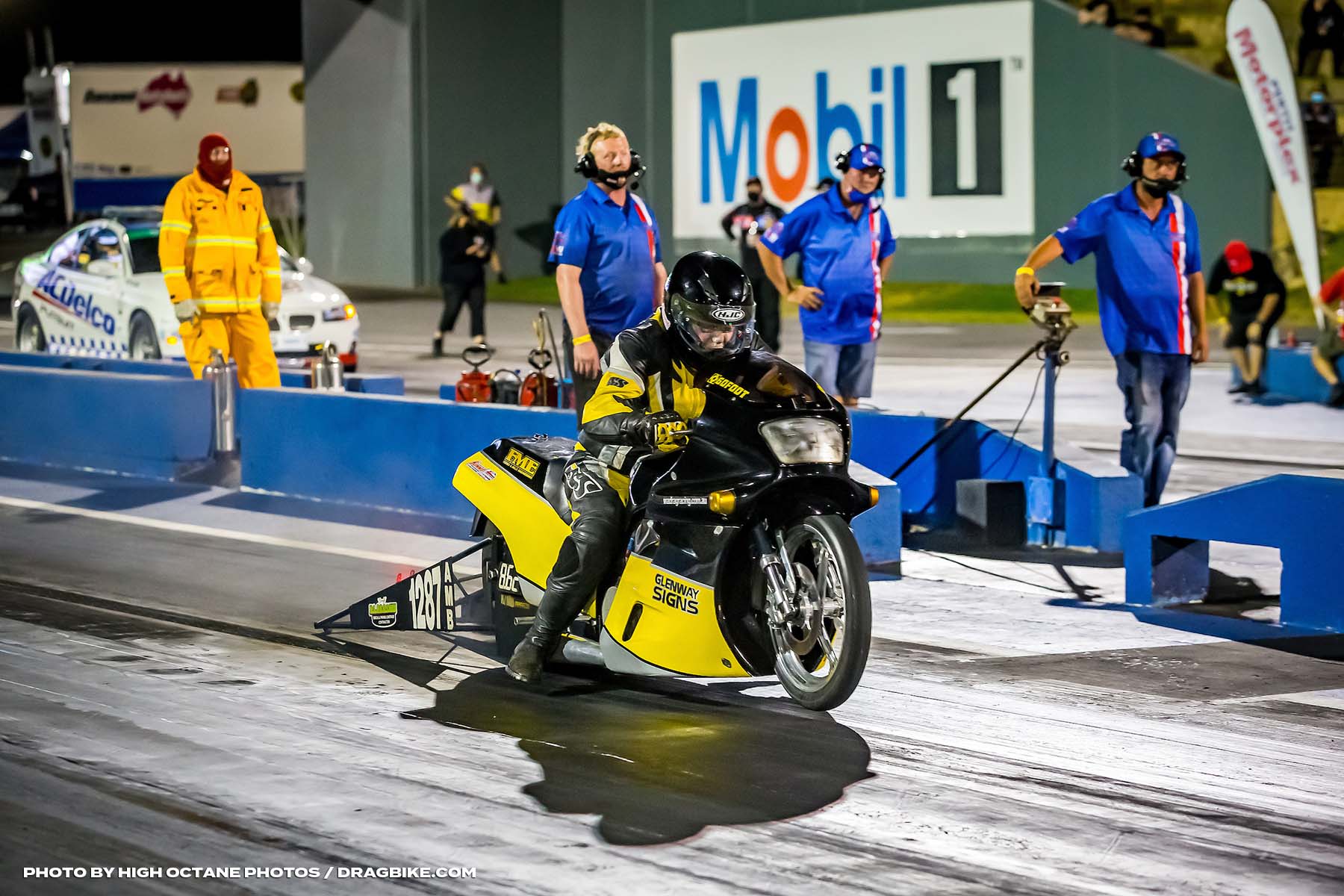 “We all know who the real winner is – poor Luke! How lucky was that for me, it is absolutely crazy,” Nieuwhof said.

“The bike has been running great all weekend and had good lights but in the last two runs, in the semi I had a half hour reaction time it seemed like but Brian broke a gearbox, and then in the final off the startline something went bang in the gearbox and the bike had no drive. So, there I was watching Luke sail off thinking that was that, and his handicap was on the board and I thought ‘bugger me dead’ – I was just gobsmacked. 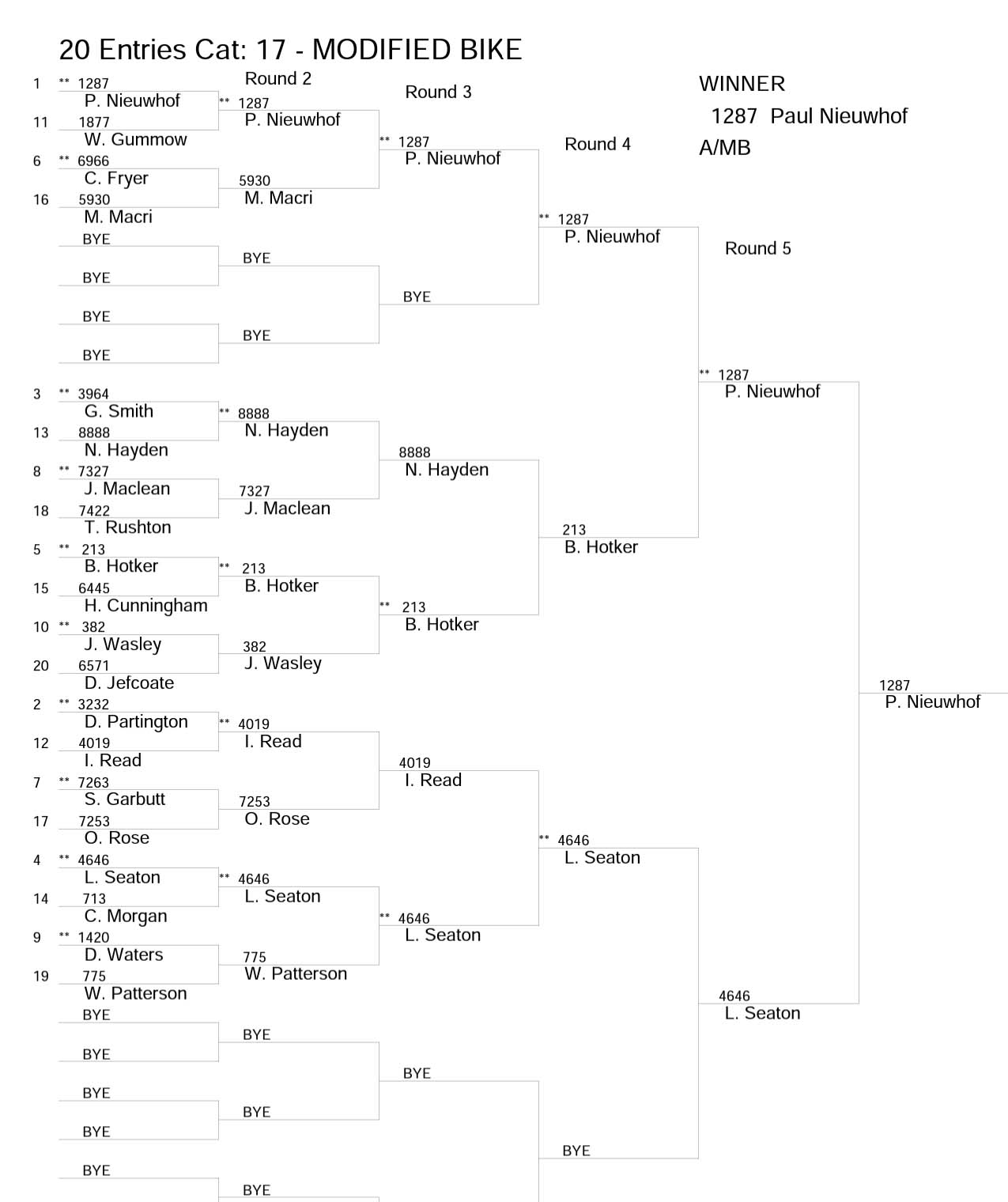 “You take the luck where you can get it, but I do feel sorry for Luke – he ran a great race and he deserved better. But that is the way it goes and I had to pinch myself – it has been a long time. I have had a good run at the Westernats in the past, over time I have won eight or nine, including three times in a row at Ravenswood, but it has been a long time between drinks.

“Thank you to FME, my wife Julie, my crew, and all the great people around the track. Who would have thought I would win the biggest event of the year with an 18 second pass,” he laughed.

The Competition Bike final came down to Top Qualifier Phill Paton and Ross Smith, with a red light from Paton handing the victory to Smith. The bracket is run as a three-round format, with Paton and Smith securing three victories each to claim their places in the final. 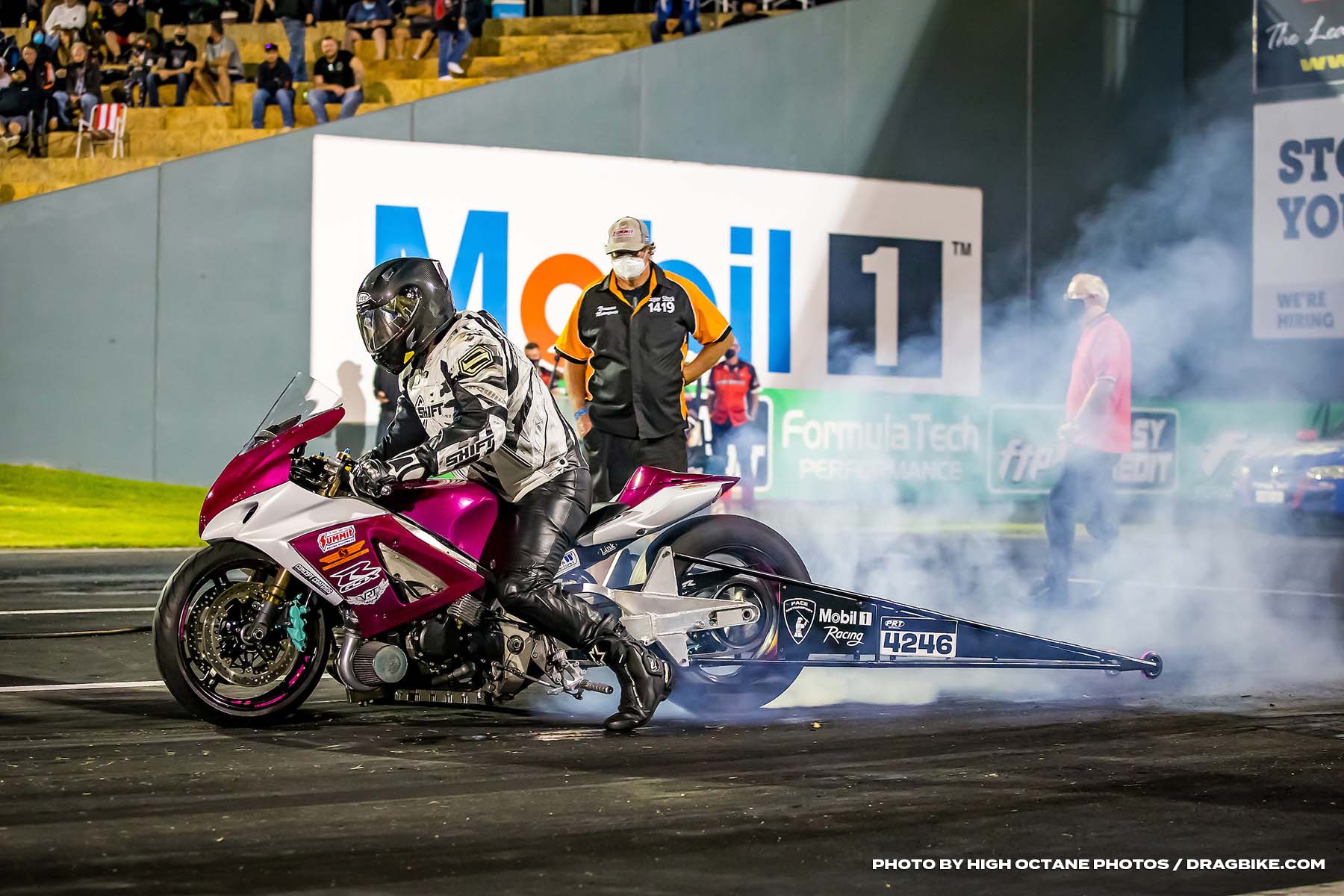 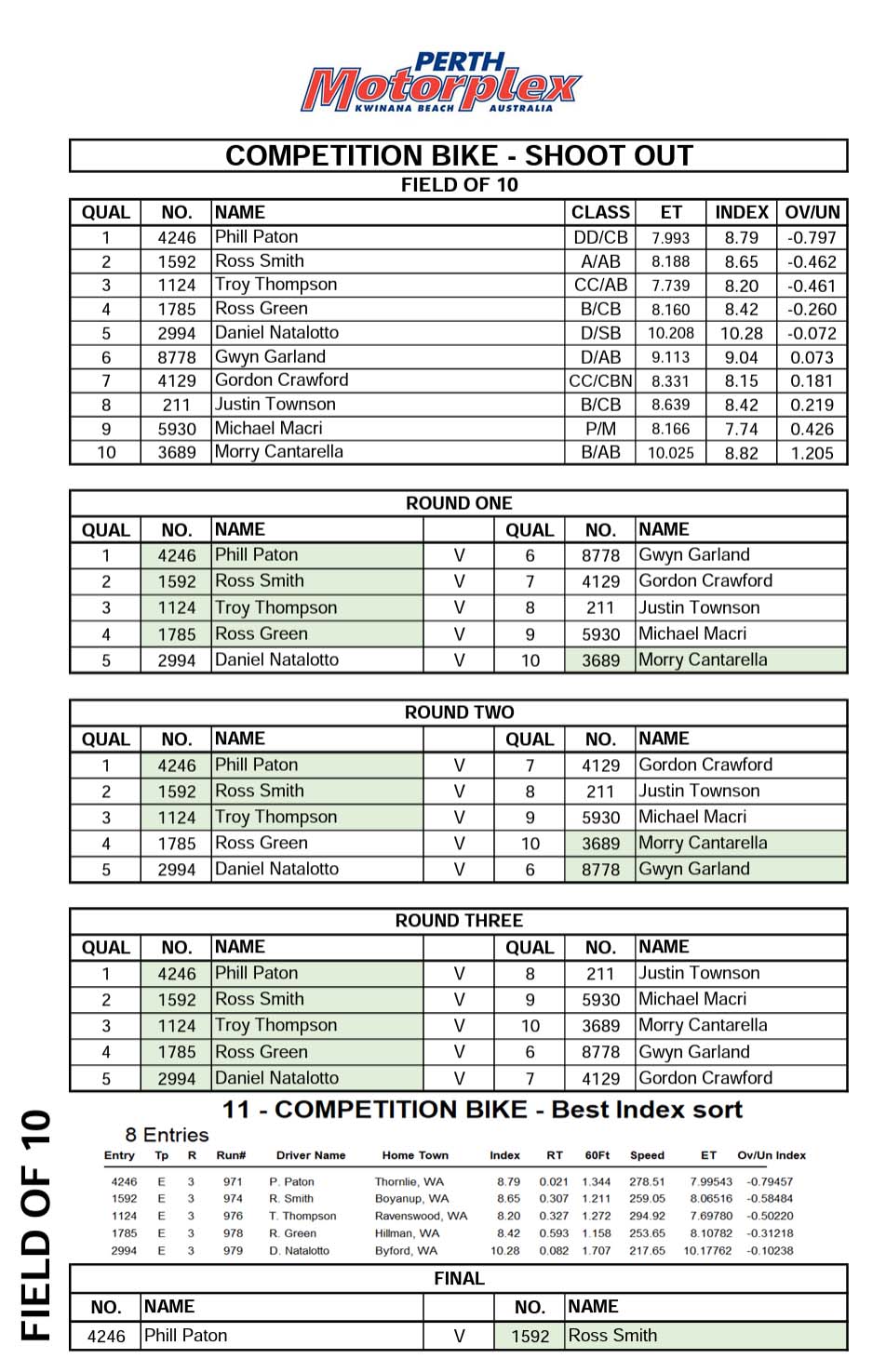 For results from today’s action at the Perth Motorplex, please click here

The next round of the Summit Racing Equipment Sportsman Series will be held at Mildura’s Sunset Strip across March 18-19. For event information, visit www.sunsetstrip.org.au