Rookie Racer Blazes Through For Maiden Win in Darwin

Levi Addison may be new to the Summit Racing Equipment Sportsman Series but that isn’t holding him back – with just two rounds under his belt, he is leading the Modified Bike standings and has already clinched one ANDRA Christmas Tree.

After making his Series debut at Alice Spring Inland Dragway’s Desert Nationals, the Victorian travelled to the Hidden Valley Drag Strip’s NT Nationals in Darwin and clinched the victory (and the championship lead) aboard his 2006 Harley Davidson V Rod Destroyer.

“I have been racing dirt drags and taking my street bike down to my local track for a few years, but this is my first year of doing the Summit Racing Equipment Sportsman Series championship,” Addison said.

“It was extremely special for me to take the win at the NT Nats and especially to do it at that event as a lot of family and friends put in a lot of hard work for me to be able to travel so far away to go racing, so I was very happy to take the win in front of them.

“To be leading the points chase is fantastic too, I am absolutely stoked and I think it is great for a Harley Davidson to be up the front.”

Addison’s NT Nats win got off to a slightly bumpy start, but a group effort saw him back on the right track and on his way to a maiden Summit Racing Equipment Sportsman Series victory. 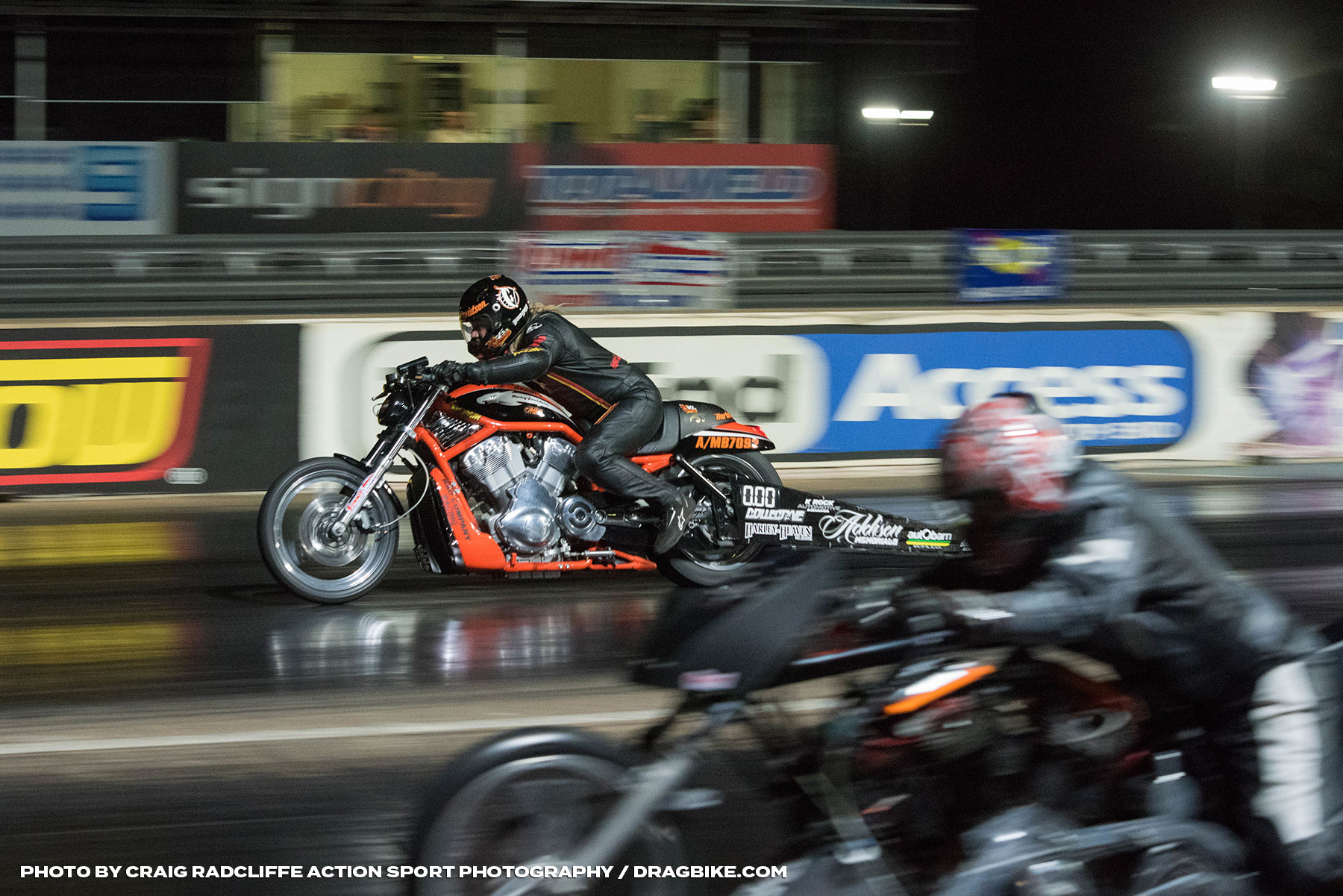 “We had a small issue in the first qualifier with the bike bogging down off the line, but we still managed to put down a 9.72s pass and the crew helped to resolve the issue in time for the second qualifier (9.70s) and our third session was also good with a 9.68s pass,” said the stonemason who works in his family’s business which has been in operation since 1921.

“Come Saturday’s racing we paired up first with the fast Hayabusa of Shane Gaghan and came away with the win with a 9.71s pass on a 9.71 dial-in.

“We made a few small adjustments for the next round against Adam Rapp on his very fast Suzuki GSXR, running a 9.70s pass on a 9.68 dial-in for another win.

“I would like to thank the Bad Company Racing Team and all of my family; especially my wife Ashley, my dad Jason and my mum Kellie – they haven’t missed a race and are a major part of my crew.

“I would also like to thank Gordy and Teresa for taking my bike to Alice Springs and Darwin; Corey Buttigieg from Fastamoto for helping us get into drag racing and for his ongoing support; and my sponsors Bad Company Racing, Harley Heaven Melbourne, Addison Memorials, The Collective Family Custom Graphics, Fastamoto, Krock Automotive Moama, Autobarn Echuca, Moto Shack, BMC Australasia and SRT signs.

“Finally I would also like to send a massive thank you to all at ANDRA and the Hidden Valley Drag Strip!”
With such a good start to the season, it is no surprise the 24 year old with Competition Bike aspirations is now looking forward to September’s round three of the Summit Racing Equipment Sportsman Series, the Sunset Strip Nationals in Mildura.

“I think the Mildura track is great – I raced there earlier this year for the Easter event and I am looking forward to getting back there,” Addison said.

“My goals for the round is to try and get some good points and keep the points lead. Essentially that is my goal for the whole season – to try and get through every round with decent points and to be as close to the lead as possible, while trying to put in some faster yet consistent times each round.”

Round three of the 2019/2020 Summit Racing Equipment Sportsman Series will be held at Mildura’s Sunset Strip across September 21 and 22.

ANDRA and its members make drag racing a family-friendly, safe sport. So come along as a spectator or bring your street car to an “off street” event and enjoy the excitement that is Australian drag racing.