South Australian racer Bryan Finn has turned what was supposed to be a one-off trip to Alice Springs Inland Dragway for the Al Stainer Memorial into a full-on assault on the ASID Track Championship.

He is off to a great start too, taking out the Modified Bike victory not only at August’s Al Stainer Memorial (August 8) but also at last weekend’s NT Titles (September 18/19).

He is currently preparing for this weekend’s Harley Challenge (September 26) which will mark round three of the ASID Championship. In October he plans to return for the final events – rounds four and five – of the championship, which will be held on back to back weekends in October (October 25 and October 31).

While his trailer and bike is staying with fellow racer and friend ‘Brains’ (Brian Moore) in Alice Springs between these events, by the time his five-event stint at ASID is done the professional truck driver will have made the 2,400km round trip from his home in Stirling (SA) to Alice Springs (NT) three times in less than three months. 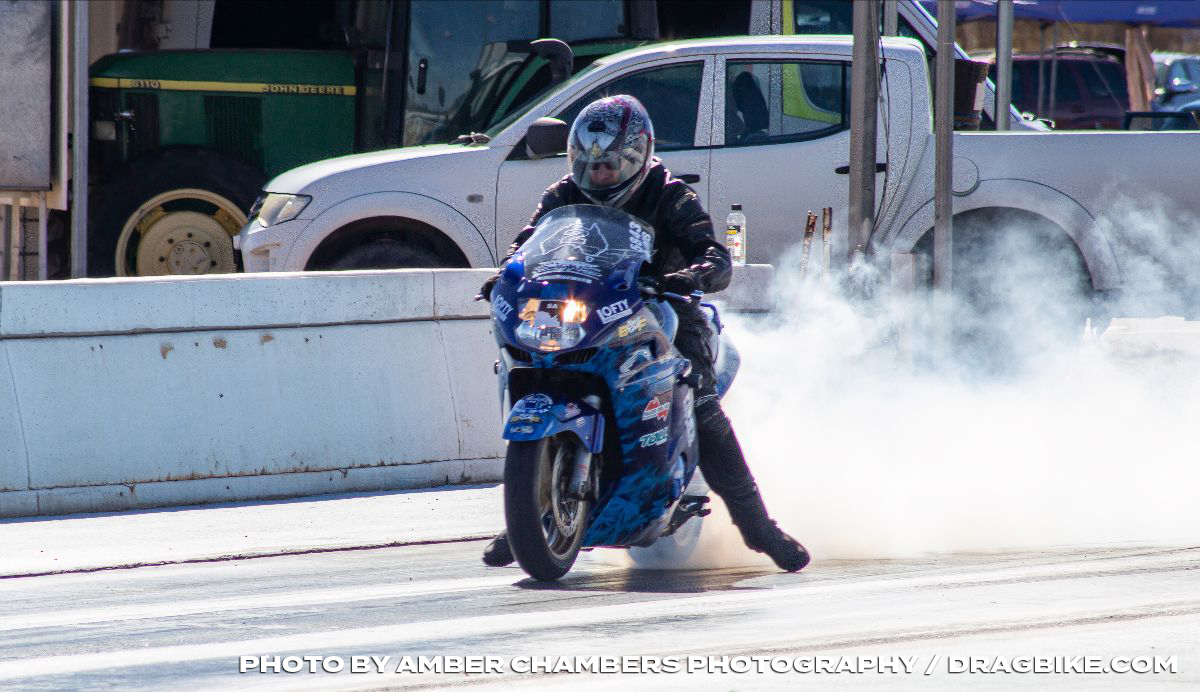 “It all started out as a joke – you see, you can’t win a Club Championship unless you become a Club Member, so I said to my mate Brains that I was going to become a member so I could take it from him,” Finn laughed.

“I was only coming up to do the Al Stainer Memorial at Alice Springs originally. Then I was thinking about heading to Darwin for the NT Titles, as they were originally being held there and I have a son living in Darwin.

“Then the next thing I knew the NT Titles were moved to Alice and round three of the ASID Championship was the very next weekend, so after all the joking I ended up deciding to just do it all!

“What was supposed to be just one meeting, the Big Al, with family and friends has completely snowballed. But we can’t do much else racing wise at the moment, from South Australia we can’t go West and we can’t go East (due to border restrictions), we can only go North, so why not!

“I am a professional driver, so for me, the trip is just ‘up the road’ and it is well worth it.”

With the beginnings of a winning streak underway, Finn says his main focus – as it always has been – remains on having fun.
“The plan is to keep the winning streak going this weekend of course, but ultimately I don’t care if I win or if I lose, it is all just about having fun,” he said.

Ahead of round three of the championship at this weekend’s Harley Challenge, Finn was full of praise for the ASID team following what was a challenging start to the NT Titles.

“Friday was a write off because we had 50km/h winds and 70km/h gusts, so they couldn’t get the track prepared. The club was great though, they persevered and got it all fired up for Saturday,” Finn explained.

“We had to start racing late but I thought that was great because we got to race at night, which is something I hadn’t done at Alice Springs before.

“The club did a fantastic job, the track was great, the event was great, and they put on a really good show.

“As far as the racing went, it was really good – I was able to race with friends, to meet new friends, and I had a bit of luck thrown in there as well! We were running the Chicago Shootout format and I broke out in my second race but the other fella broke out by more, so I won.

“Then I changed my Dial In for round three and broke out again, and in the final I reduced the Dial In again and it was a nice run, a 10.52 on a 10.50 dial-in and while the other guy, Adam Rapp, beat me to the line, he backed off and broke out. PBing the bike (setting a personal best) for the track in the last three passes was good too.

“It was a great event and I am having a great time racing at Alice Springs. I have to thank Brains for looking after my trailer and bike since August and he will continue to do so until the end of October. And also Graham and Christine Shiell of Shiell Transport and American Muscle Car Imports – they employ me and they let me go racing, so I really appreciate their support.

“I am really looking forward to getting back to the track this weekend for round three, but in the meantime I have to say: Party On!”